Yesterday, my friend and I went to Breadbar for Ludobites. Chef Ludovic Lefebvre rents the Breadbar space on 3rd Street from May 19th - August 22nd (available Tuesday – Saturday) and prepares a handful of items, all of which are small-plates style.

We started off with the basket of rustic bread and butter; loved the butter but it would have been better if there was more than one selection of bread included in the bread basket. Our waiter advised that most patrons order 3 dishes each. Scanning the menu, it was with much difficulty that we were able to just choose six between the two of us.

Our first plate, which came recommended by our waiter, was the calamari with avocado slices and pineapples. There were two calamari steaks in the dish and they were slightly breaded. I really enjoyed this dish because I was not expecting it to be fried so it was a nice surprise. Fortunately, it was not too greasy. Next up was the chicken liver mousse, with bacon and green apples on toast. It was delicious and rich! It is probably sacrilege for me to say.. but I thought there was a little too much liver on the toast. Yes, you could probably have spread some of it on the bread from the breadbasket (which I did), but the bread wasn’t as toasty as the ones that came with the meal. Our next dish was the poached egg on toast with chorizo and saffron sauce. I love a good poached egg, and this it was. The saffron sauce was a nice complement and the chorizo gave the dish a little kick.

Our last three dishes were more entrée-centric. We got the cod with fennel and dill which was light and clean. Good but not especially unique. I've had more flavorful cod dishes, especially the miso cod at Japanese restaurants such as Nobu and Sasaya. Next came the much anticipated fried chicken, cooked in duck fat with herbs de provence. OMG, it was so good and everything I had expected! The chicken was so moist; although it looked like white meat, it tasted like dark. The breading was crisp and not at all oily. This was definitely our winner of the night.

Our last plate was the oxtail with polenta. Easily one of my favorites as well. The oxtail was fork tender and so scrumptious that I could have finished it all by myself. The polenta had just the right amount of cheese in it to the point that it was not heavy. I was sad as that was our last dish but I was stuffed at that point. Stuffed… but never too full for dessert. There are only two desserts on the menu: Strawberry Soup with rhubarb, hibiscus and marshmallow ice cream, and Chocolate Mousse with crème brulee ice cream. Our waiter mentioned that the strawberry soup was the more popular selection but how can I pass up on chocolate? The chocolate mousse was a perfect end to our meal; it had a little jalapeño kick to it that left a nice little burning sensation.

The only qualm I had with this dining experience was that the food was not paced properly and came out too quickly and often times, almost all at once. I am a pretty fast eater but at some point during dinner, we had 3 plates on the table. All 3 were dishes that would have been better enjoyed while hot, specifically the fried chicken and oxtail. I felt like I was rushing through my dinner instead of taking my time to savor my meal. As we were dining on a Wednesday night and the restaurant was not at all packed, there was no reason to rush us to turn the tables over at a faster pace. Otherwise, the food and service were both great.

Chef Ludo told us that he tries to change the menu every two weeks although a bunch of items will still remain week over week, only because there are certain dishes that everyone wants and expects, such as the fried chicken.

The total bill came up to $95 excluding tip. Very affordable for 6 plates + dessert. It also helped that the restaurant is B.Y.O.B, with a nominal corkage fee of $5. 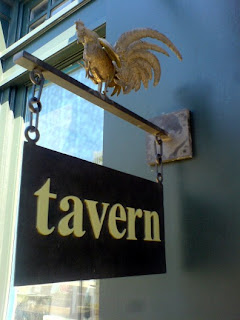 Went to Tavern yesterday for dinner. The Tavern space houses a bakery, a larder for takeout orders, a bar section and the dining area. Loved the décor, I’ll be sure to pop by some day for casual drinks and nibbles. Really glad to finally have a little bar scene (that doesn’t include frat boys and tequila shots) in the area. Sorry, I was camera-less today..
My friend and I started by sharing the roasted asparagus with polenta and fried egg appetizer. It was excellent. I had expected an actual fried egg ala breakfast style, but instead it was a semi boiled egg, fried on the outside, nice and runny on the inside. Yolk heaven! The bread was good too, especially the blueberry bread. For my entrée, I ordered the pork chop with cornbread stuffing. I believe there were collard greens in the mix. The pork chop was excellent (not dry at all) and the stuffing was the winner, although a little greasy from the chorizo. Nonetheless, delicious! My friend ordered the mussels and clams with artichokes and toast. I had read some reviews about how few mussels were in the entrée. I thought there were ample. Perhaps the kitchen made these changes after getting some feedback. My friend was lucky that I dislike artichokes or I would have shamelessly helped myself to most of her food! Finally, there’s always room for dessert. We shared the panna cotta that came with prosecco sorbet. It came in a sundae-like glass so digging for the bottom of the panna cotta took a little effort. My friend said that was her favorite of the evening.
I thought the service was great. The server came by many times to fill up my water glass and to offer me more bread after I had commented that I was starving, and the hostess/manager came by to check up on us. Our waiter was attentive but not to a point of overbearing, and he came by to tell us that Regis Philbin was sitting two tables away. Also, apparently, Thomas Keller was at the restaurant the day before. Darn it, a day too late…
I thought the bill was reasonable, given the neighborhood. $120 before tax & tip for one appetizer, two entrees, a dessert and 3 glasses of wine - 2 for me of course ;-) Overall a great dining experience, I’ll definitely venture back. The beef daube is next on my list!