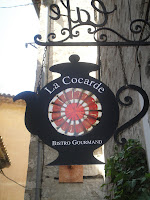 While in the France Riviera for the Cannes Film Festival, we made a side trip to the quaint town of St Paul de-Vence. You can get to the town via a 45 min bus trip from Nice that will only cost one euro. St Paul de-Vence is a fortified medieval city and is home to one of the most well-known museums Foundation Maeght, and burial site of famed painter, Mark Chagall.

After walking through the streets of St Paul de-Vence, I was getting a little exhausted. My friends were psyched to buy souvenirs and visit the Choisy gallery, all I wanted was an adult beverage. We were on a mission to find a restaurant that was not a tourist trap. After walking by a bunch of restaurants, we finally stumbled upon La Cocarde. 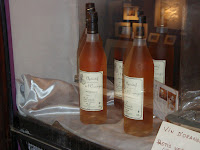 The orange wine in the window was what caught our attention so we decided to give it a try. Wine: sweet.. not so good.. but menu looked great, affordable and the place is charming.

Without missing a beat, we ordered a bottle of white wine and I was satiated. The menu was simple: salads, quiches, couple entrees. I ordered the duck, Jinny got the quiche, Uday got a simple pasta and Diana ordered the prawns. 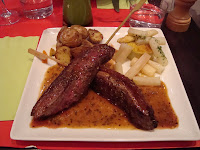 Everything was delicious! The duck came brochette style, was cooked perfectly, served alongside french fries and potatoes. It was a generous portion of duck, considering the lunch pricing. 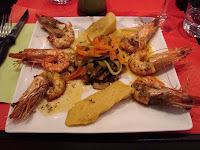 The prawns were grilled Mediterranean style, bursting with flavor and served with toast and a vegetable slaw. 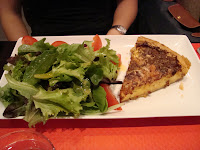 I have to say that the quiche was one of my favorites. Fortunately for me, Jinny is a small eater so I helped myself to some of hers. I treaded lightly, hoping that the quiche was not too cheesy. It wasn't! In fact, the filling was light and flavorful, and the crust was flaky and buttery. 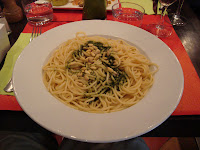 The pasta looked like nothing special but Uday raved about it. It had a pesto sauce with pine nuts. Simple and light. La Cocarde was exactly what we were looking for, a quaint bistro serving tasteful meals. This gave us fuel to trek through the town for a few more hours.
La Cocarde
23 Rue Grande- 06570
Saint-paul, France
Tèl : 04.93.32.86.17