The Publican, Chicago: Where the Pig is King 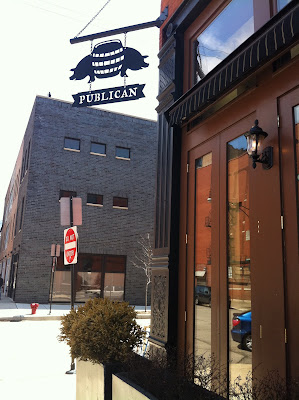 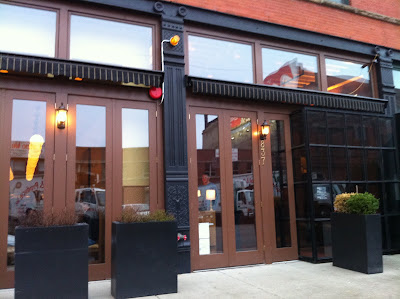 Ask anyone in Chicago where the best brunch is at and The Publican will often be top on the list. The pork-focused restaurant in the Warehouse District is the third popular restaurant by Paul Kahan of Blackbird and Avec. I had heard about their fried pork rinds and charcuterie. But I was conflicted. I had reservations for brunch at The Publican but unfortunately they do not serve their charcuterie during brunch. So being the excessive, indulgent eaters that we are, my friend and I decided to stop at The Publican for a quick bite before our dinner at Blackbird. 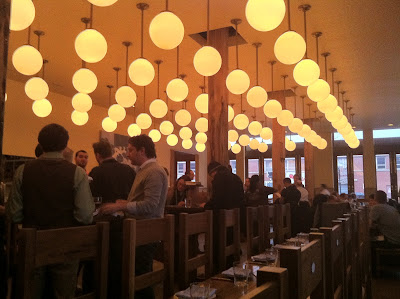 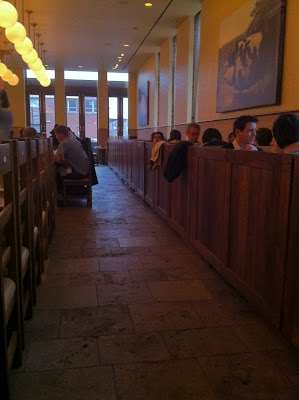 The restaurant, though expansive, was pretty packed at 6pm. The large German beer hall was lit with bright globe lights, and had ample communal seating and booth seating that looked like a Catholic confessional. 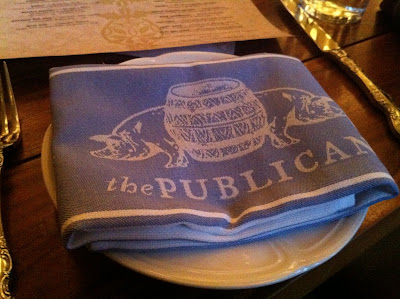 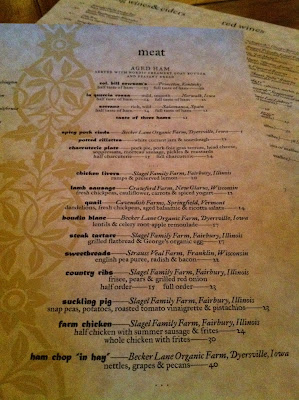 Their dinner menu is meat-heavy with a nice selection of offal items such as pork rillette, sweetbreads and chicken liver. But pescetarians need not cringe as they also offer many seafood options such as fresh oysters, steamed mussels and dover sole. 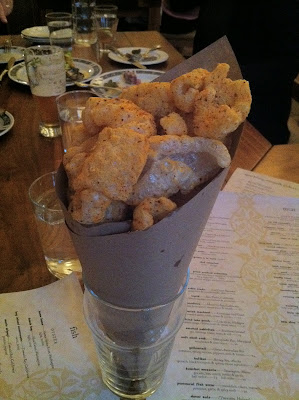 The Pork Rinds were freshly fried and surprisingly light. It had a nice seasoning which got spicier when you got to the bottom. 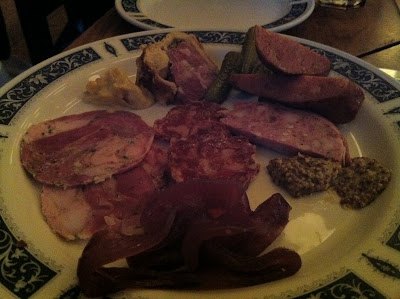 The Half charcuterie was offered for $15 (vs. Full at $24) and comprised of pork pie, liverwurst, head cheese, sopressata, morteau sausage, pickles and mustard. The terrine was pork-heavy and had good chunks of meat. The head cheese was tender and delicate, while the sopressata had an intense salami flavor. My favorite was the pork pie which had a buttery pastry crust and a spicy seasoning on the pork. My only critique is that I wished the charcuterie had been served on a wooden block instead of a plate that looked like it was purchased from a garage sale.


We headed back to The Publican the following day for brunch. Once again, the restaurant was packed. 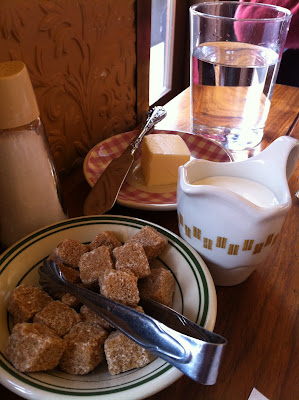 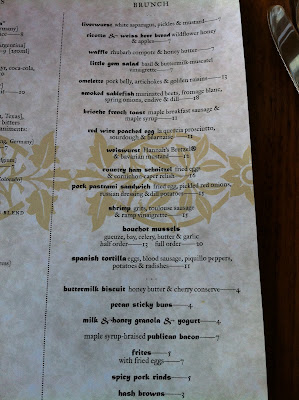 The Publican's brunch menu is unique and ambitious. You won't find the two-eggs-and-bacon special here. Instead, choose between a spanish tortilla with blood sausage, pork pastrami sandwich or the pork belly omelet. 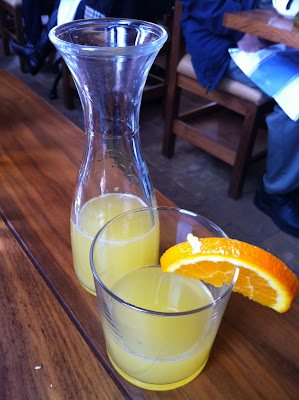 Mimosa might seem pricey at $9 but it came in a 250ml carafe and was served with freshly squeezed orange juice. 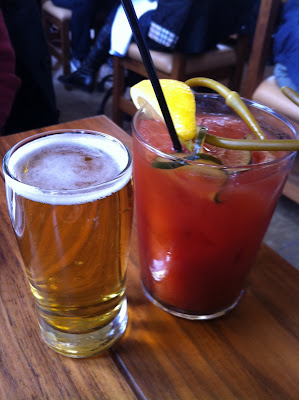 Bloody Mary with Weihenstephaner beer back. For someone that doesn’t like V8, Tabasco and Worcestershire sauce, I thought the drink was good and had a nice balance. 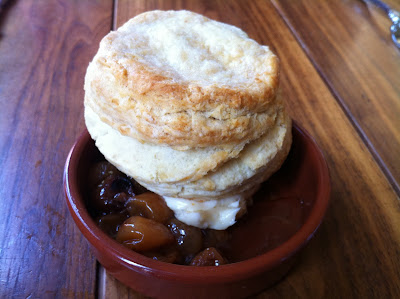 Buttermilk biscuit with honey butter and cherry preserve conserve. Unfortunately the biscuit wasn’t served warm. I enjoyed the soft sweet butter so much that I didn’t think the preserve was necessary. 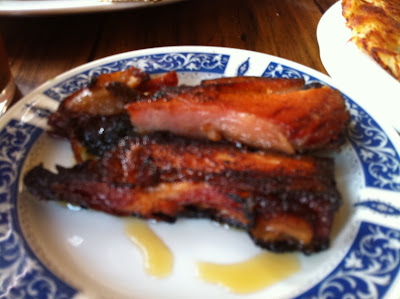 The Maple syrup braised bacon was possibly the best I’ve ever had. The bacon was thick, fatty and juicy. It was definitely more pork belly than crispy American bacon. The maple flavor added a nice caramelization to the bacon. 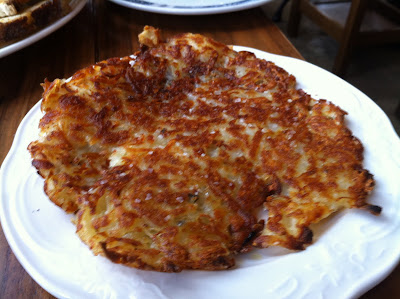 The side of hash browns were also cooked well. They were thin and crispy on the outside, but softer and well seasoned inside. I'm always appreciative of a non greasy hash brown and The Publican was able to achieve that. 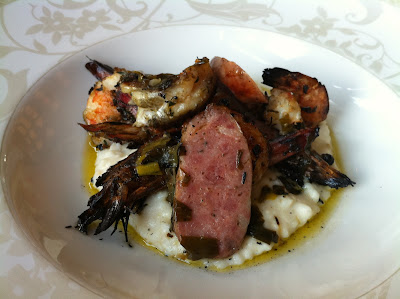 Shrimp and grits with Toulouse sausage and ramp vinaigrette was a beautifully prepared dish. I appreciated that the shrimps were served with head on. They were grilled and had a slight char that added some smokiness. The grits were creamy, topped with a nutty Parmesan. It's clear that the kitchen can master non pork dishes as well. 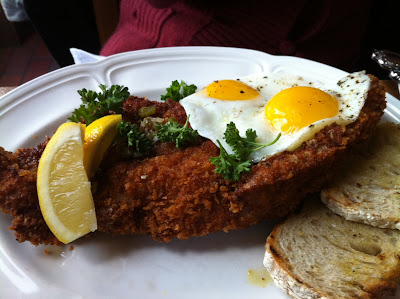 The Country ham schnitzel with fried eggs and cornichon-caper relish was magnificent. Firstly, the schnitzel portion was massive. Secondly, it was cooked perfectly. The thinly pounded ham was breaded with an airy panko-like breading and was not oily. The schnitzel resembled a pork katsu in texture and flavor. I was impressed with how tender the meat was. By the time we made it through half of the schnitzel, the other half was still tender and not dried out. Although I am not a fan of relish, I thought the relish added tanginess to the schnitzel that was welcome.

Brunch at The Publican was solid. The ambiance was energetic and lively. Waiters were dressed very casually, and laughter and conversation filled the room. I thought the ingredients used were fresh and the food did not feel too heavy or unhealthy. The dishes weren't fancy or extravagant. They were simple yet well prepared. And they definitely hit the spot. Especially if you are craving some pork. You'll be hard pressed to find a better bacon.

Haha, every time I read your posts, I think, "I would never order that!" But it's fun to see the other side of the meaty spectrum. Glad you got to satisfy both your charcuterie and brunch whims at Publican!

I've got a weakness for charcuterie too :-) I hope to visit Chicago next year and dine at Publican.

Schnitzel. Mmm. Especially with a Bloody Mary (which I love)!

Next time I gotta come for the brunch!