Ever since I started the new job and have been traveling to Dallas for the last 3 months, this poor blog has been lacking. Most weekends that I am back in LA are spent doing laundry and catching up on my TV programs on my DVR. As my project began to wind down, I took the opportunity to check out a new spot while meeting up with my dear friend who was in town for the weekend. 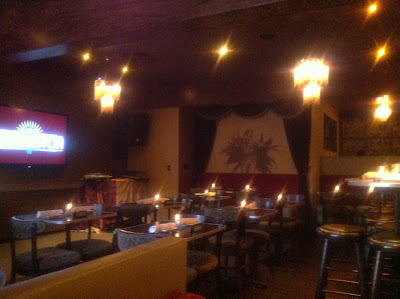 The Charleston is a new restaurant/bar/lounge that opened up in Santa Monica, next to Wilshire Restaurant. The space used to be occupied by Angel's and interestingly enough, the decor remains barely unchanged (including the mural of an angel on the wall). But it seems less loungey and there are less couches and more tables which bodes well for an establishment that is positioning itself as more of a restaurant than bar. My eyes may be failing me but I also noticed that it was less dark and dim compared to Angel's.
The restaurant, barely open two weeks, was born by Jet Tila, former chef at Vegas' Wazuzu at the Encore. I'm not going to lie to you - I had no idea who he was. I definitely have been out of the dining scene these days... Apparently he is known for his Asian cuisine and also did some pop-ups in LA last year. Interestingly enough, the menu at The Charleston was not heavily Asian influenced. It is more on the lines of American comfort food. 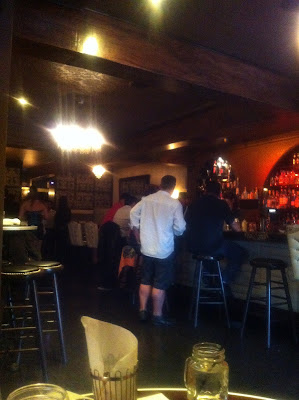 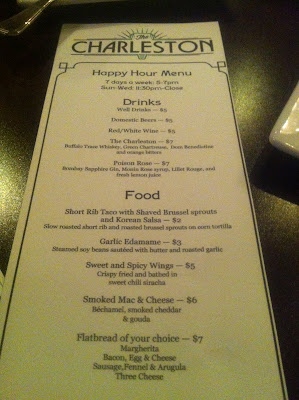 Happy hour runs daily from 4-7pm, with extended HH on Wednesday. This is upscale happy hour prices, but you do have to remember that you are in Santa Monica after all.
My friend first ordered a cocktail on happy hour: The Charleston. The whiskey-based drink with green Chartreuse, Dom Benedictine and orange bitters was extremely strong. Good to know they don't skimp on the booze during happy hour. 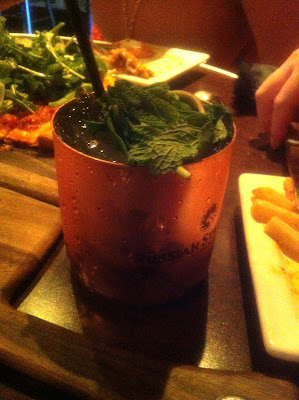 The second cocktail (not on happy hour) was the Mint mule, a variation of the classic Moscow mule was a bit easier to drink. The addition of mint to the vodka/lime juice/ginger beer was refreshing. 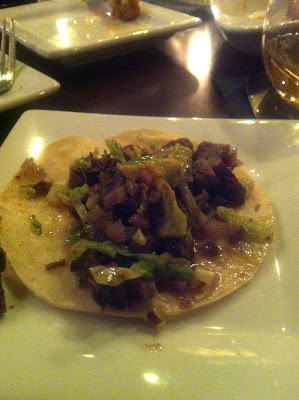 Short Rib Taco was one of my favorites of the night, and one of the very few Asian inspired dishes on the menu. For $2 a piece during happy hour, you get slow roasted short ribs with shaved Brussels sprouts on a rather fresh corn tortilla. The flavors were bold with Korean spices and the meat was tender.
There was a nice selection of four flatbreads on the happy hour menu. 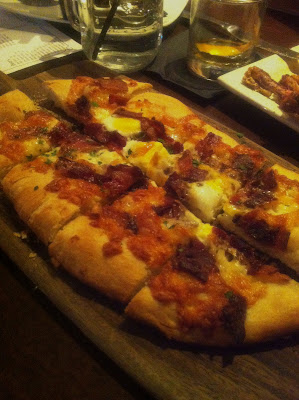 Bacon, egg & cheese flatbread was just like a breakfast pizza. I really enjoyed the crispy crust and the smokiness from the bacon. The flatbread was topped with semi-runny quail eggs. I liked that there was just a slight amount of cheese and they did not overload the flatbread with toppings. Sometimes simple is better. 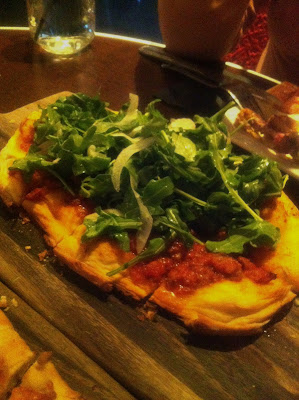 Sausage, Fennel and arugula pizza was such a unique flatbread. The sauteed sausage almost seemed like tomato paste and gave the pizza a nice moisture. The sausage definitely had good spice to it. I also enjoyed the sharp flavors of the arugula which paired nicely with the rich sausage and gave the flatbread a freshness to it.
Other items on the happy hour menu that we sampled but did not photograph were the Mac & Cheese with bechamel, smoked cheddar and gouda (very good) and the Sweet and Spicy wings (a few at the table thought it was too spicy, I didn't think so. Not bad but pretty common flavors). 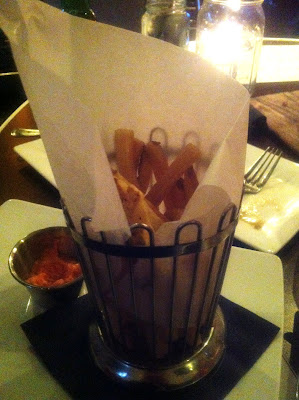 Basket of fries not on happy hour (the portion was actually larger, this was taken after we had plowed through half the serving). 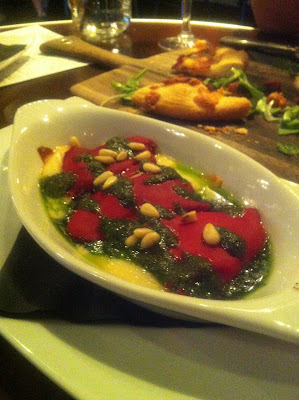 Manchego stuffed piquillo peppers with toasted pine nuts and pesto was interesting and surprisingly quite tasty with the spicy peppers and the piquant cheese.
I thought that The Charleston had a pretty good happy hour menu - definitely on the upscale end but there were quite a good amount of food options. Given Jet Tila's reputation, it was interesting to see that the menu leaned more towards American, with only some Asian dishes. When I left the restaurant, I was still unsure as to what the theme of this place is - apparently they might house culinary pop-ups, but they also have performances, comedy shows and karaoke on their calendar. Not exactly sure who their target clientele is. But it's still early in the game, perhaps all they need is just a bit more time to build their image.
The Charleston
2460 Wilshire Blvd
Santa Monica, CA 90403
(310) 828-2115
www.charlestonla.com