Hitting up the Hawker Centers, Singapore

When you travel to Singapore, you really shouldn't waste your time feasting on western meals at fancy restaurants. You should definitely take in the local food. In a country where many cultures, races and religions co mingle, the local food in Singapore is a lovely combination of Malay, Chinese, Indian, Indonesian and Peranakan flavors. The best way to get a taste of the local food is to head straight for the hawker centers. Hawker centers are food courts (typically open-aired, although many indoor air-conditioned ones are popping up around town) with many stands that specialize on specific dishes. I love how everything is fresh and cooked to order. Many food stands offer various dish sizes so you can sample a bunch of small plates from different stores. 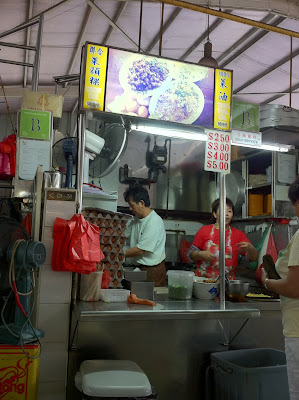 I wasn't intending to eat when I accompanied my mom to Ghim Moh market. We had planned on just picking up fruits and seafood. But when I saw the carrot cake stand, I just couldn't resist.

Carrot cake, also known as Chai Tow Kway, is not what you think. It's not sweet and it's not a dessert. It's turnip cake, fried with eggs and pickled radishes. You can order it black (with soy sauce) or white (as is). 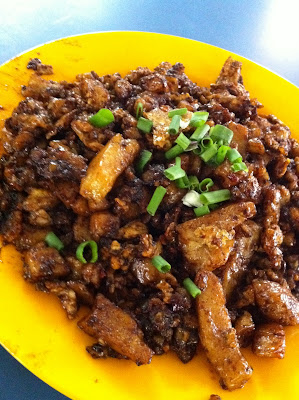 We ordered the black version which was delicious. The scrambled eggs and diced radish cakes were perfectly coated with sweet dark soy sauce. I also loved the crunch and sourness of the pickled radishes. 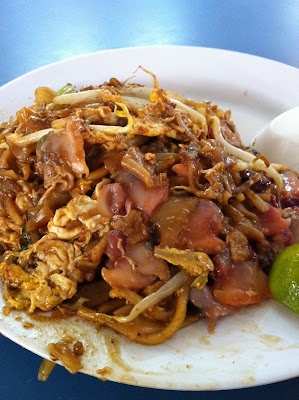 We also ordered Char Kway Teow, which is a signature Singaporean dish. Noodles are fried up with eggs, sprouts, chunks of lard (very key!) and plump cockles. The noodles are cooked with dark soy sauce and chili. Some stalls exclude the lard and the cockles (for health reasons), but in my opinon, those ingredients are crucial for the perfect kway teow. I love how the cockles are also a tad bit undercooked and taste extremely oceanic. The lard chunks are fried to a crispiness which you know is an artery-clogger but totally worth it. 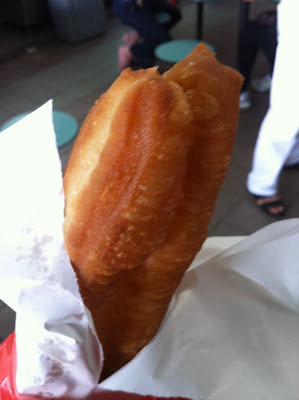 To end the meal, I stopped for a Chinese donut, also known as youtiao or you char kway. You can't go wrong with freshly fried up pieces of golden-brown dough. It was crunchy on the outside and airy in the center. 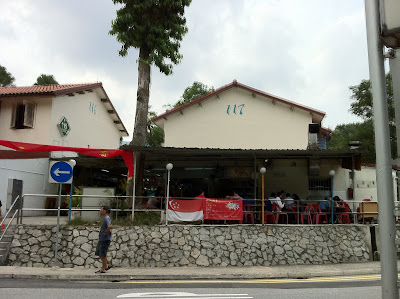 The next day, I went to Commonwealth Hawker Center in search of oyster omelet (oh chien). Unfortunately, it was a Monday and many stalls were closed, including the one I was looking for. 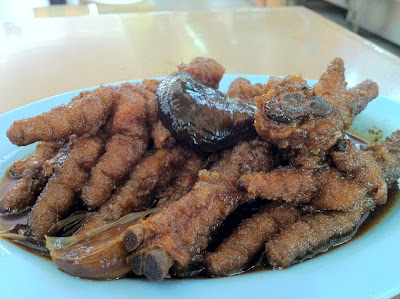 The chicken feet was a bit disappointing. It was lacking in salt and spice. In addition, the skin was soggy and tasteless. I never leave any feets on the plate but I did this time. 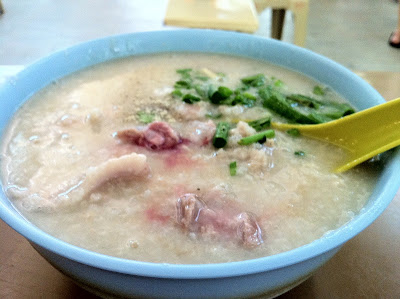 Congee with lots of fun innards. Loved the pork intestines, stomach and liver. There was also the more common ground pork. I loved the organ flavors in the porridge. 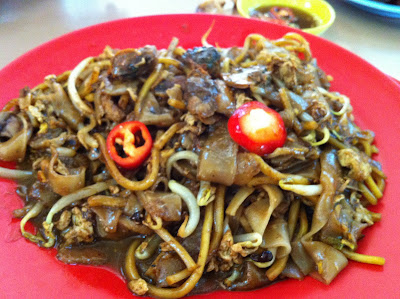 I ordered the char kway teow again, but thought this wasn't as good as the plate from Ghim Moh. The kway teow here wasn't as spicy and it was a bit watery. 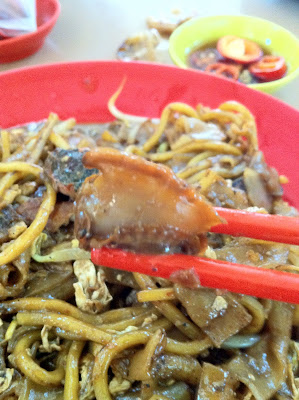 Also, there were fewer cockles in this plate, and they weren't as large as the ones at Ghim Moh's.

Apart from the congee, I wasn't impressed with the hawker food here. They do serve a killer fish head noodle soup which I'll have to try some other time. 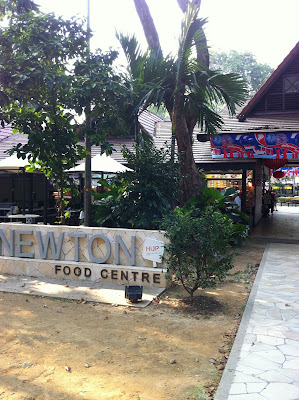 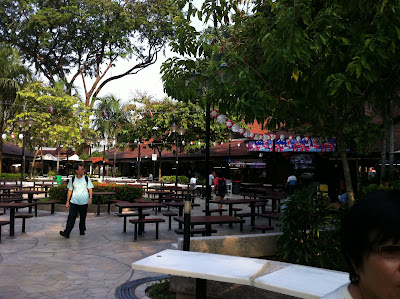 This is the motherload of hawker centers. It's been around for many years, has been remodeled, and houses numerous stalls. It is a bit overpriced for hawker center standards, but is still way cheaper than anything you can get in LA. I really wasn't planning to check it out on the last day I was in Singapore, but I had to get my oyster omelet. 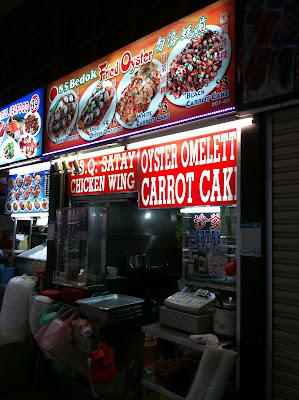 This store had everything I wanted! Satay, oyster omelet and carrot cake (again). 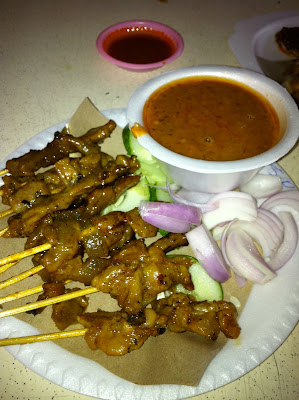 The satay in Singapore is just outstanding. I love how it's grilled up in front of you. The meat (in this case, chicken and pork) is always well seasoned and juicy. The spicy peanut dipping sauce is the perfect pairing to the meat sticks. It's so good that it even makes the plain cucumbers and sliced onions taste delicious. 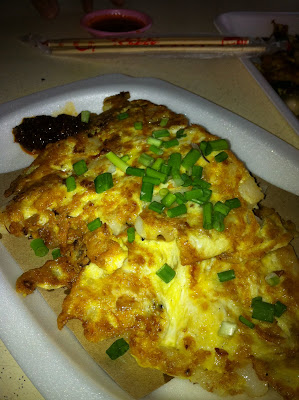 This is the 'white' version of the carrot cake that I had at Ghim Moh. Tasty but I prefer the sweetness of the dark soy sauce in the dark version. Love the sambal chili that they serve alongside. 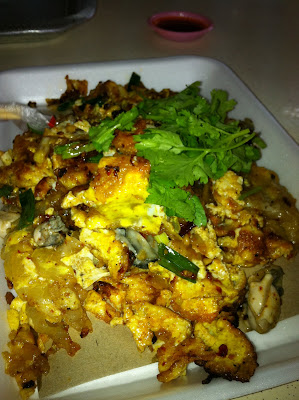 Finally, what I was searching for - oyster omelet, or oh chien. It's a mixture of starch, eggs and huge oysters. Similar to the cockles in the char kway teow, I love how the seafood is only slightly cooked. This definitely tasted more like raw oysters than fried. The oyster juices were all mixed in with the egg and starch. Think there was also some pickled radishes in the dish which added a noticeable tang. I enjoyed this dish, but I thought it was kind of pricey - SGD$9 and there weren't that many oysters (probably around 6-7). 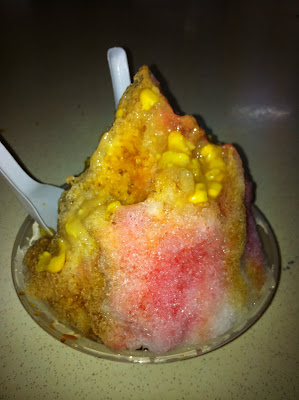 Finally, an ice kachang to cool off in the hot, humid climate. 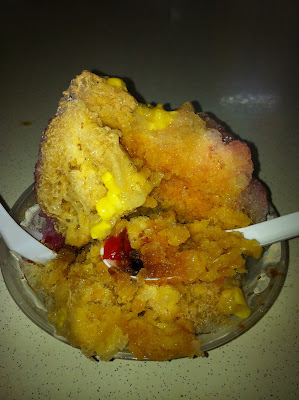 It's a shaved ice dessert filled with lots of goodies such as red beans, agar agar/jelly, sweet corn and palm seed (which is like a hard but chewy jelly). The shaved ice is topped with coloring and most importantly, sweet condensed milk.

I only had 4 days in Singapore but think I was able to get a good flavor of the cuisine in such a short time.