On our last day in Singapore, we met up with my dad’s friends who took us out to dinner at a Cantonese restaurant called Imperial Treasure located at Great World City. A. We were led into a private room where we proceeded to have a sort of tasting menu with a variety of dishes but that were served in small portions instead of the huge platter of food that you normally get at most Chinese restaurants. 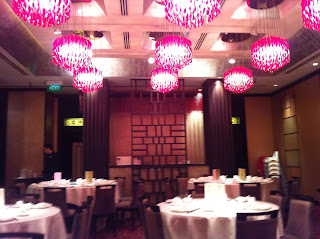 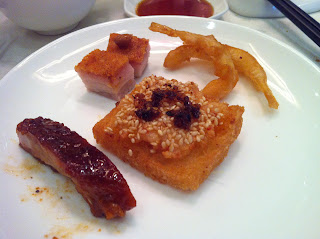 First course ~ Appetizers that included shrimp toast, char siu/barbeque pork, crispy suckling pig and some unidentified fried vegetable. I really enjoyed the deep fried crispy shrimp toast which comprised of minced shrimp on top of a crispy toast that melted in your mouth. 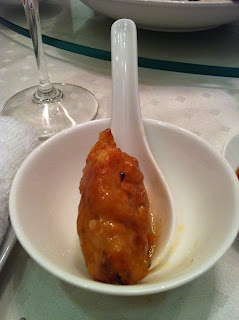 Second course ~ braised fried tofu
Delicious morsel that was bursting with flavor when you bit into it- the SO was shocked that this was actually tofu because it was anything but bland. 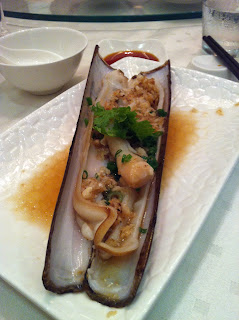 Third course ~ razor clams
The clams were so fresh and went down your throat smoothly. They had a sweetness to it, and was cooked so simply in soy sauce and lots of garlic - so tasty! 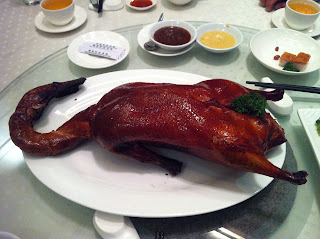 Fourth course ~ Peking duck
Many locals say that Imperial Treasure has the best peking duck in the city, and I kindda agree. The duck looks so elegant on the plate with its long neck. The duck was presented to the table and carved tableside. 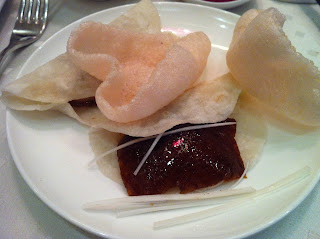 The duck skin was perfectly crispy & crackling, with a thin layer of fat - we sprinkled a bit of sugar on it which was such a nice combination. The meat that the server carved out was lean yet very juicy. I appreciated that the duck was served in a thin crepe instead of a thick bun - when you are eating peking duck, you definitely don't want to fill up on carbs - it's all about that crispy skin. 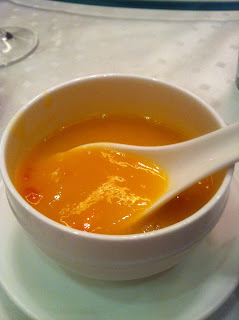 Cantonese cuisine to me is typically rather heavy - usually I walk out of a Cantonese restaurant feeling stuffed and ODing on MSG. I liked that the food here was served in smaller portions and elegantly prepared. I enjoyed the peking duck - with the skin and meat served separately, it was like getting two dishes from one. Imperial Treasure apparently has a good dim sum luncheon as well.