Catching Bastide before it suddenly shuts down again 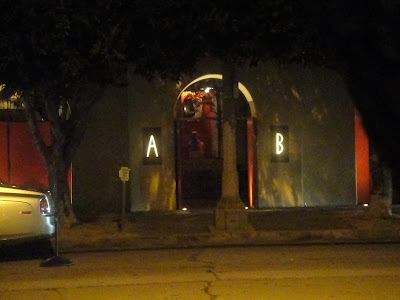 Over a year ago, we were about to make a reservation for Bastide but procrastinated as usual only to find out shortly after that it had suddenly closed down. It was unfortunate but come to think of it, not all that surprising. Bastide had been filled with drama over the years with scenes that played out like a soap opera including internal strife between owner Joe Pytka and his chefs, sudden closures and firing of chefs and the staff being locked out of the restaurant only to find out it was closing for good. Bastide recently reopened in December after a year hiatus, serving only lunch at the time. When we heard that they were open for dinner last week, we quickly made reservations for fear that the restaurant might abruptly shutter on us.

Many great chefs have called Bastide home such as Ludovic Lefebvre (L'Orangerie, LudoBites), Alain Giraud (Citrus, Anisette), Walter Manzke (Patina, Church & State) and Paul Shoemaker (Providence). The old Bastide was a Classic French fine dining establishment. The latest Bastide incarnation is a casual bistro + bookstore. Gone are the tasting menu and formal atmosphere. The new chef in place is Joseph Mahon who has spent time at Sona and Bouley.

Bastide shares the space with French publisher Assouline. The space includes various rooms including the coveted spot in the courtyard. 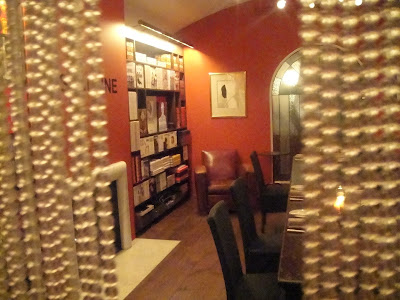 Another dining area is the library decorated with bookshelves and a fireplace. 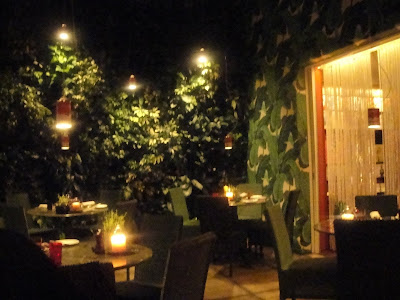 We were seated in the Garden room that was dark but lit with candles. 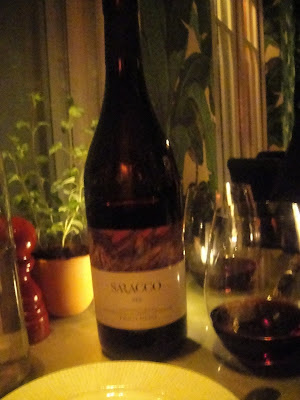 We started with a bottle of wine. The bottles of wine on the wine list were very reasonably priced. 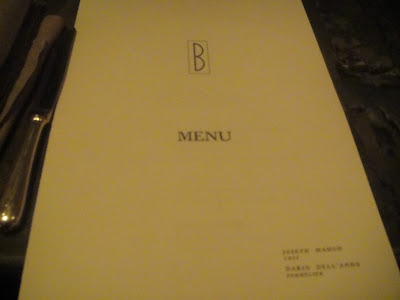 Even though they no longer offer the tasting menu, our waiter shared with us that they can actually prepare a tasting menu upon request and if we had called ahead. The ala carte menu is simpler with a variety of salads, starters and entrees that include a typical selection of pasta/risotto, fish, steak and chicken. We opted for a starter and entree each. 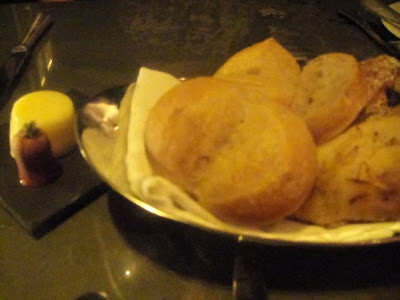 Homemade bread, choice of focaccia, wheat, walnut raisin and baguette. Served with lightly salted butter and radish. Delicious, freshly baked and warm. My favorite was the walnut raisin and focaccia. The butter had an interesting texture that had a bit of a panna cotta consistency. In any case, it was soft and buttery. 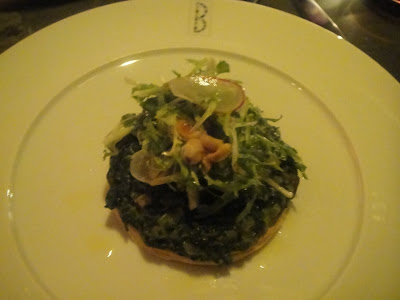 Spinach tart with pancetta, creme fraiche, hazelnuts and frisee salad
Lovely colors. The pastry crust was flaky and buttery. I liked the crunch from the hazelnuts and the sharpness from the onions. 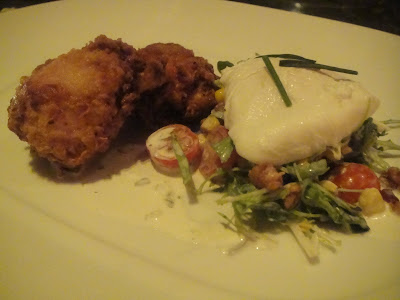 Frisee salad with crispy fried chicken, bacon, poached egg and buttermilk vinaigrette
I don't usually order salad to start but the fried chicken won me over. They served the dark meat that was breaded, perfectly fried and not greasy at all. One piece was de-boned and the other piece fell off the bone easily so it wasn't a messy dish to handle. The poached egg added another thick rich layer to the well dressed frisee. There's nothing I would change about this dish, it was perfect. 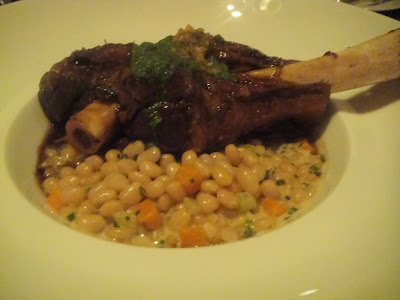 Braised lamb shank with coco beans, preserved lemon and arugula sauce
I love it when lamb shanks are served with the large bone intact. It's all very rustic and primal. gnarrrr. The meat was tender and fell off the bone. I also liked the beans that were cooked al dente and the texture was a good contrast to the soft meat. 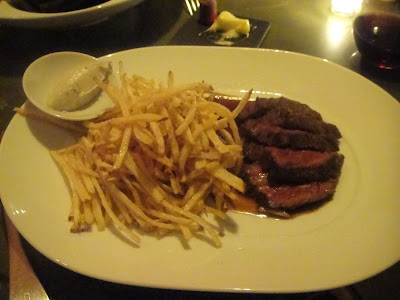 Steak frites with anchovy butter.
They served the anchovy butter on the side as the chef is aware that some people may find the anchovy overwhelming. The steak was cooked perfectly, medium rare on the side of rare upon request. I loved the skinny fries that were crispy but soft at the same time. They were definitely fresh french fries, not the starchy, frozen ones. The winner however was the anchovy butter that was fishy, salty, creamy and buttery all at the same time. It was so heavenly that we had to ask for more bread to spread the butter on. This is the type of thing that should be packaged and sold at a premium. 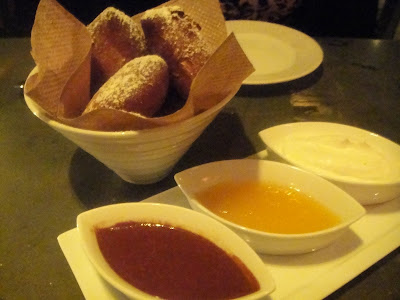 Beignets which were freshly fried and served with a trio of sauces, chocolate, pineapple and creme fraiche. The pineapple was surprisingly a very good combination with the beignets as it was sweet and sour. Chocolate was good as expected, but I thought the creme fraiche was a little bland.

The food at Bastide was well executed and delicious. It's a pity that I never got a chance to eat at the prior versions of Bastide so I can't compare but I did like the simple, casual menu. The portions were generous and the prices not exorbitant. It's bistro fare with no bells and whistles- you won't find innovative, avant garde dishes, at least not right now. But you never know, Bastide is all about revamps so that could be in the cards not too far in the future.

I see you had the Beignets. We weren't happy that they ran out of these!

Yutjangsah - anchovy butter was heavenly, perhaps you can ask for 2nd helping :)

KevinEats- eventhough you missed out on the beignets, I see you ordered pretty much every other dessert! that espresso chiffon cake looks amazing!