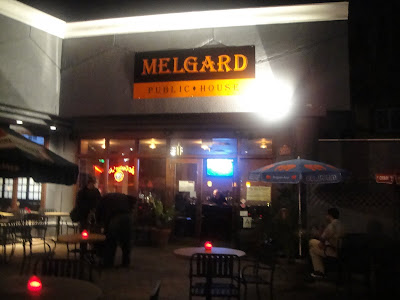 I was looking forward to the new bar opening up on Melrose Ave since it's on my way home from work. Melgard Public House is named after it's cross streets: Melrose and Gardner. It is in the old Louise's spot and is from the same owners as Third Stop. I was excited to hear that they had good selection of beers and grub so my friend Ben and I decided to check it out. 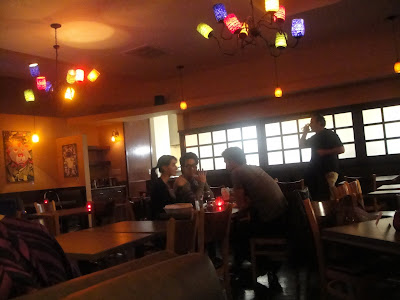 The space includes a bar, dining area and an outside patio which would be perfect for the summers (and people watching). They only have valet from Wed-Sat but you can always park at the other valets on the street. The decor inside didn't look warm to me, perhaps because it's a fairly large space and brightly lit. Definitely not as intimate and inviting as at Third Stop. 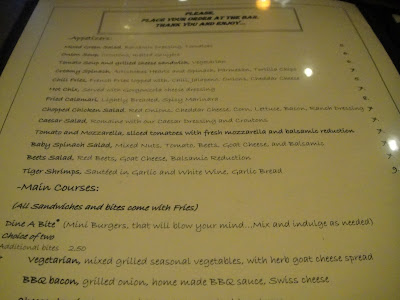 Unfortunately it turns out they did not have a Happy Hour per se. Yes, you get a free pizza with an order of beer before 7pm, but there weren't any other drinks or food specials. Not that big an issue as prices were very reasonable. The drink menu was extensive and has a good selection of Belgian beers such as Kwak and Maudite. The food menu on the other hand was too eclectic. There was Italian fare such as pasta and pizzas, English pub food such as shepherd's pie and fish and chips, American food such as sliders and sandwiches. It didn't seem that the place had an identify of its own. 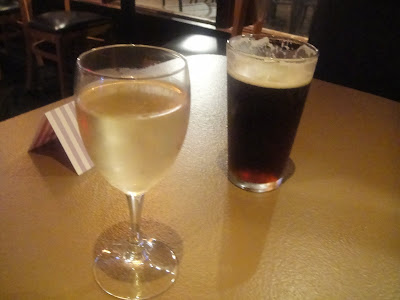 Downtown brown beer and a glass of house white wine. The downtown brown is described as being lightly hopped with a hint of roasted and crystal malts. 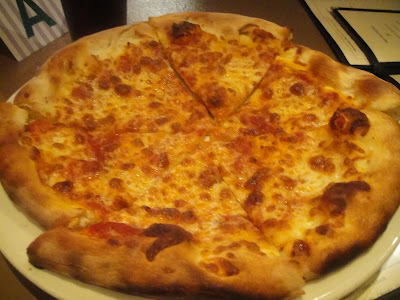 The free cheese pizza at Happy Hour. Ben didn't really care for this (crust was dry and generic) but I personally liked it because it wasn't too cheesy and greasy. It's pretty mediocre but it's free! 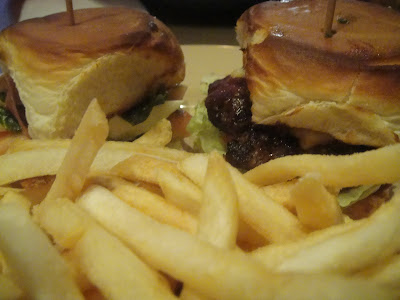 Sliders, choice of two. We went with the BBQ bacon, grilled onions, home made BBQ sauce, Swiss cheese and the Pesto prosciutto with fresh mozzarella and fry basil. The sliders were alright. I liked that the bun was toasted and that you were able to mix the selections in a given order. The fries however were really bad. They came out cold and did not seem fresh. In fact it seemed like they were frozen fries and were very starchy. Choripan sandwich: Argentine sausage sandwich with lettuce, tomatoes and french fries. The sausage itself was unique with a hint of spice but the sandwich was really dry. There was barely any sauce. Once again, the fries were dry and starchy.

Service was pretty bad. Well, partially. The owner came by to check on us and I told him about the fries. He took a fry from my plate to test it and went back to the kitchen. I don't usually like to complain to the owners about the food but seeing that the restaurant is new, I think I am doing them a favor by pointing out the issues. He also comped us a round of drinks and took off the choripan from our bill when he noticed that I didn't eat it. Our waiter however was a bit absent minded. Unfortunately he was the only server and had to handle nine tables. I asked for water four times before he brought one over. He rarely came by to check on us so I had to flag him down whenever I was ready for my next drink. He didn't bring by utensils, napkins and ketchup. He brought our wine and food over to the wrong table. But it wasn't just the service that was bad. The food menu needs to be a bit more focused, it seemed like it was having an identity crisis. I don't really know what their value proposition is. Is it an American pub or kindda like a Cheesecake Factory that is trying to cater to all. There were definitely some kinks in service. But overall, I', trying to be understanding since it's new. They don't have their rhythm yet. I liked the beer selection and the fact that the owner was sensitive to the fact that I wasn't too impressed with the food. I'll give it another shot, maybe in a couple months or so.

I live right by here - didn't realize it was named for the cross-streets! Silly me. Bummer that it isn't better... would have been nice to have a new place to go for a bite/drink.

Hi Diana - you should still check it out since it's so close to your place. Maybe just stick with the beers and pub grub (like fish and chips or calamari). I'm sure they will fix some of the food issues and service because the owner was pretty receptive.