XIV: the fastest 8 course meal you'll ever have... 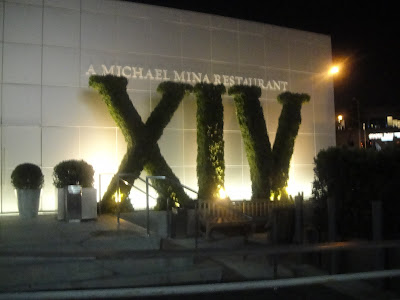 LB and I have been wanting to hit up Happy Hour at XIV (pronounced "fourteen", not "X-I-V") but had been stalled by rain on three separate occasions. Not this time, we will prevail. 6ix on Sunset runs from Mon-Sat 5-7pm and the menu includes cocktails for $8 (normally priced at $14), bubbly, house wine and well drinks for $6, a selection of food priced at $6 including lobster corn dogs, truffle pop corn and ahi tuna poppers. That's an amazing deal for a fancy establishment owned by two Michelin starred chef Michael Mina. Mina runs a huge restaurant empire with his partner, Andre Agassi. XIV is his 14th restaurant, hence the name. It is a collaboration with real estate and entertainment company SBE run by Sam Nazarian, which owns trendy restaurants and hotels around town including Katsuya and The Bazaar at the SLS hotel. XIV is designed by French designer Philippe Stark who also conceptualized the Alice-in-Wonderland-esque design for the SLS Hotel. So basically, a lot of great collaboration went into the restaurant. 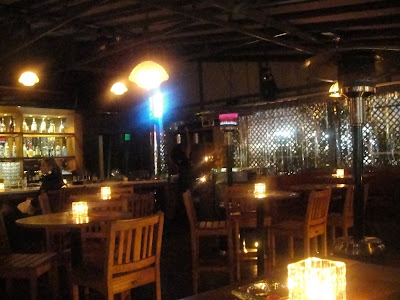 The restaurant has a bar area, dining room and terrace. We grabbed seats at the terrace. I liked the wood tables and booth seating. It's trendy and pretty dark inside- perfect place for an after-work date. 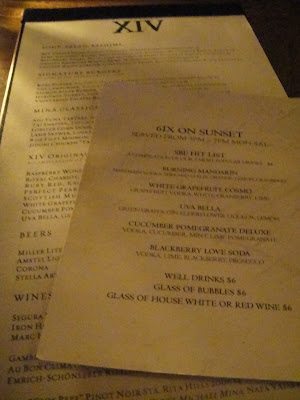 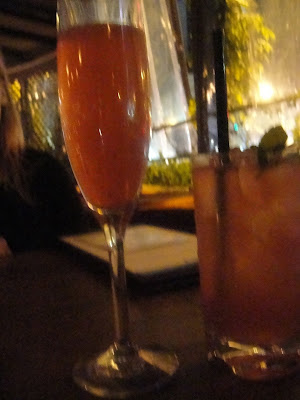 1st round of cocktails. Pretty good deal at $8 for cocktails in a trendy bar in Hollywood.
Cucumber Pomegranate Deluxe - Vodka, cucumber, mint, lime, pomegranate
They ran out of the Blueberry prosecco drink so I ordered a raspberry bubbly drink. Both drinks were decent but seemed a bit weak. It's a Monday, I need something stronger! 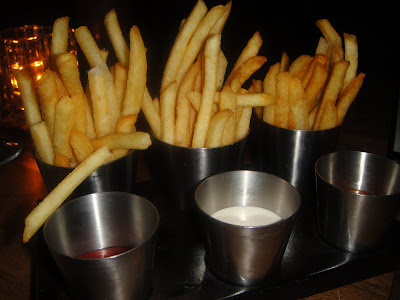 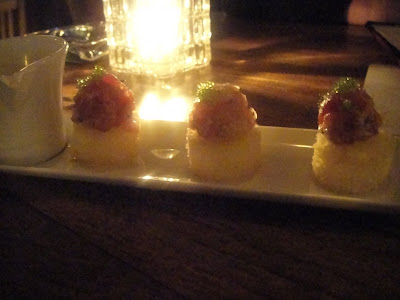 Hamachi and ahi tartare poppers. The fish was atop a fried rice cake and served with ponzu sauce. I liked the addition of the ponzu which soaked into the rice cake. I enjoyed this dish but it wasn't really a "good HH deal" as each popper was literally one bite. 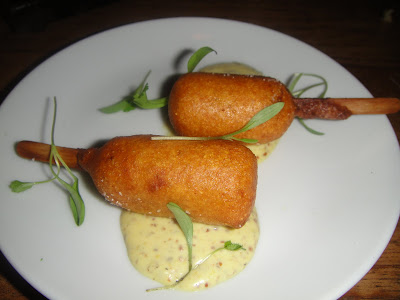 Lobster corn dogs with wholegrain mustard creme fraiche. Even worse of a HH deal. Each corn dog was about 2+ inches long. Although you could tell that it was some sort of seafood in the corn dog, you really couldn't tell that it was lobster.

We ordered another round of drinks. We had to wait over 10 minutes for the waitress to even look over at us (BTW there were only two other parties in the terrace). She was mingling with the table beside us while we were desperately trying to flag her down before happy hour ended. 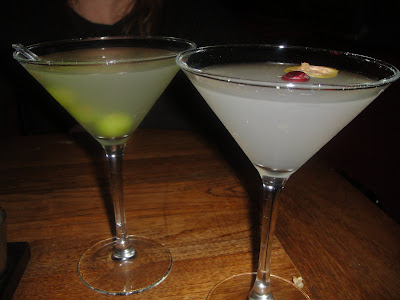 Uva Bella - green grapes, gin, Elderflower, lemon
I liked how they skewered up three grapes so that they looked like olives in a martini. Refreshing drink.

After closing out (it cost about $95 including tax and tip - ouch! we hadn't even started dinner yet..), we made our way to the dining room for the next leg of our XIV adventure. 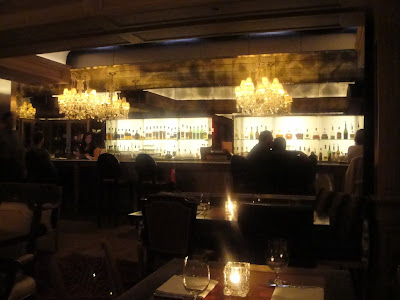 The dining room is a bit more formal and stuffy while the terrace is more comfortable and hip. There were only about two other tables dining when we were seated. 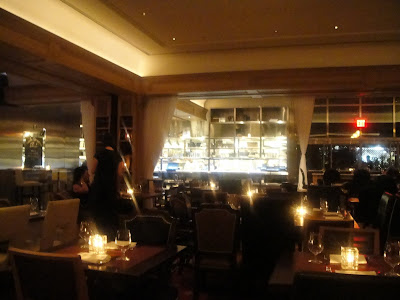 You can choose to order ala carte or a tasting menu. The tasting menu options included 8,11 and 14 for $64, $88 and $112 respectively. Not too pricey for that many courses. Some reviewers mentioned that the portions were small but I didn't think they were any smaller compared to most tasting courses at other restaurants. In fact, the portions were definitely larger than that disappointing lobster corn dog. If you opt for any of the tasting menus, the table collectively selects items from the menu and each diner is served the same dish which are individually portioned. So try not to dine with someone with significantly different taste or you might be stuck with the Caesar salad. 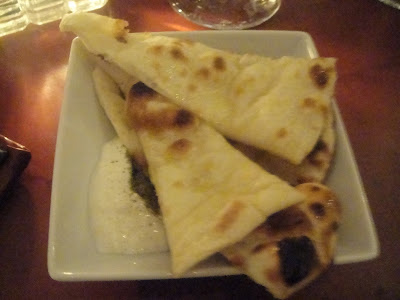 To start, warn pita bread with feta cheese. The feta cheese was very mild and tasted more like greek yogurt. That's a good thing for an anti-cheese person like myself. 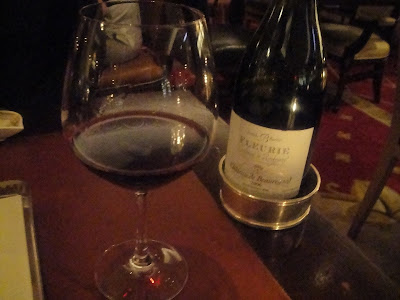 We got a bottle of Beaujolais which the sommelier recommended. On Mondays, you get 50% off bottles of wine. What a steal! 1) Beef shabu shabu with matsutake mushroom dashi, foie gras, radish and cilantro
The dashi was poured table side. I liked this dish as I thought it was interesting- I've never had foie served in a broth. The thin slices of raw beef were cooked in the warm, salty broth. 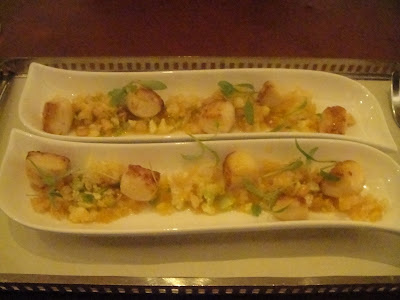 2) Nantucket Bay scallop tempura with cauliflower, passionfruit and almonds
This was a deconstructed scallop tempura. The scallops were served with crumbled tempura chunks instead of being breaded with tempura and deep fried. I liked the contrast of the crunchy tempura with the smooth, soft pieces of scallops. 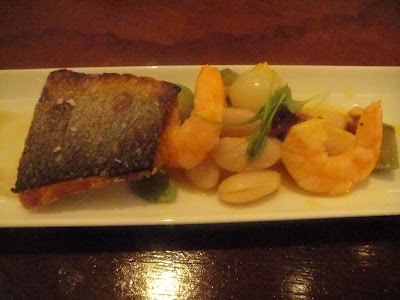 3) Crispy branzino with laughing bird shrimp, mussels, olives, butter beans and chorizo
The skin was crispy but I didn't think this dish was anything unique. The shrimp and beans seemed like they were an afterthought and just tossed on the plate.

While we were halfway through our branzino, they brought by the next course. A bit annoying because the next course should be eaten while it's fresh out of the oven. Unfortunately, we weren't able to get to it immediately. 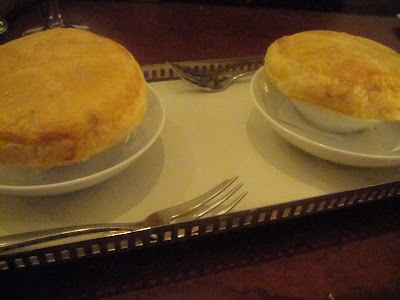 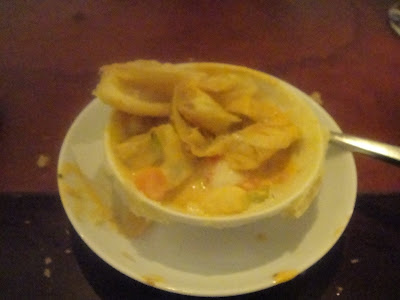 The pie crust was buttery and the filling was thick and rich. The cream sauce was likened to a bisque and had a strong seafood essence. This really hit the spot. I thought the vegetables were a tad bit undercooked. I know some chefs liked to cook it al dente, but I could barely cut a piece of carrot with a knife. 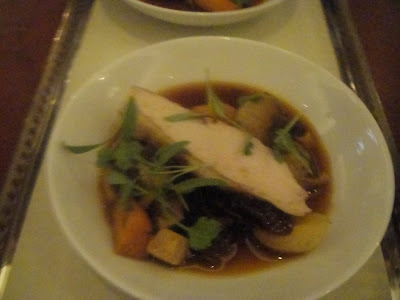 5) Jidori chicken "Tagine" with Vadouvan, eggplant, baby carrots and baby fennel
Interesting that they called this a "tagine". I didn't get any tagine flavors which are typically slow cooked with flavorful meats and sauce. The description of the dish made it sound so much more unique and delicious. Instead, this dish was a little boring. Once again, the vegetables were hard and difficult to eat. It's a pity that they did not serve the chicken with truffled mac and cheese which was the combination that was served just the past two weeks during dineLA. 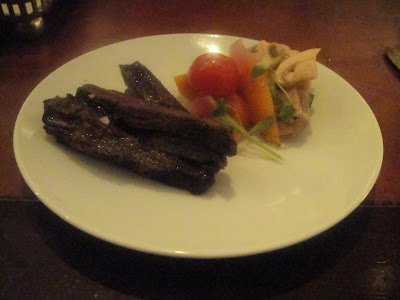 6) Grilled American Waygu skirt with Moroccan spiced vegetables
Guess what? This dish was served while we had just started on the chicken dish. By the time we got to the meat, it was a bit overdone which is unfortunate given that it was a good cut of meat. I liked the seasoning of the meat but did not really care for the vegetables which seemed to be over pickled and sour. 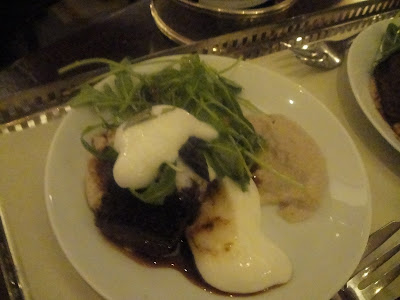 7) Prime NY steak, Kobe short rib, figs, arugula, horseradish and hazelnuts
This was the last of our savory course and once again, this dish was sitting at our table for about 10 minutes while we were enjoying our previous plate. Thankfully the meat was still tender and not overdone by the time we got to it. 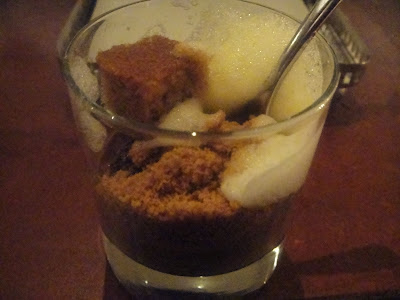 8) For dessert, nutella custard, popcorn ice cream, toast streusel, passionfruit
Everyone online raved about this dessert. I LOVE nutella so this was a winner in my books. It was also innovative and had a lot of components and textures working together in the cup.

Overall the food was good but nothing mind blowing. I thought it was a good deal at $64 for eight courses. Unfortunately, the service and pacing of the food wasn't up to par. Our waitress disappeared for a couple courses and we weren't given the right utensils. Do they really expect us to stuff a whole chunk of steak into one bite. We're not barbarians, and this is Michael Mina's XIV after all. I also don't understand why they were not pacing the courses better. There was only one other table being served food at the time so the kitchen shouldn't have been overwhelmed and it was a Monday so they really didn't need to rush us. The host/maitre'd came by to ask how our meal was during our last savory course and I mentioned politely that I enjoyed it but thought that the plates were coming out too quickly. The gentleman was rather nonchalant, a bit defensive and not at all sympathetic. He told me that that's the way they do it at XIV - two course may come out at the same time so as to "engage" the table. Hello, there was only two of us at a tiny table. One plate each at a time is "engaging" enough. What would be more "engaging" would be for us to savor our meal, allow time for conversation between bites and not rush through the dishes so that the next one wouldn't sit cold for too long. Honestly, I don't believe his spiel. This is supposed to be an elegant dining establishment serving a unique, well thought out menu. This isn't family style at a Chinese restaurant where numerous plates are shoved in front of you. Do they really want me to mix bites of jidori chicken with Wagyu beef? Would they really want that beautiful cut of meat to sit overcooking at the table? Somehow, the care that should come with a restaurant that holds the Michael Mina name wasn't there. It really seemed more SBE than Mina. Ultimately though, I'm still glad that I checked it out. XIV has been on my list for both dinner and happy hour and I'm glad I got to kill two birds with one stone. It's too bad dinner was too rushed for us to fully appreciate and savor the meal. And we each left $175 poorer and with indigestion from eating too quickly...

Hmmm... I think I feel exactly how I felt about XIV before I read your very thorough review -- on the fence. That dessert does look divine though!