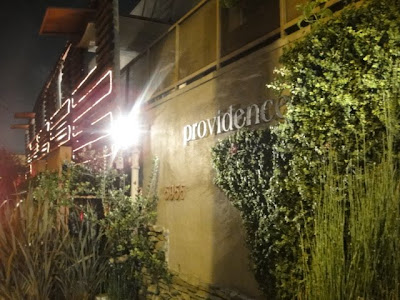 My friend LB and I were on the lookout for news of the 5X5 Collaborative Dinner held annually, where each month, 5 chefs came together for a day to cook one course each, and rotated their restaurants as venue for the event. Last year we had a superb meal at Water Grill, and a not so superb meal at Angelini Osteria. Unfortunately to our dismay, there would be no 5X5 this year. Instead, Providence Restaurant agreed to hold the Bocuse D'or USA Benefit Dinner on November 16, 2010. This would be somewhat of a proxy for 5X5, given that five great chefs would be present to cook a course each, for one night only. The chefs were Josiah Citrin (Melisse), Walter Manzke (prev. of Church & State), Alain Giraud (prev. of Anisette), Michael Cimarusti (Providence) and Tony Esnault (Patina). The dessert course was prepared by Providence pastry chef Adrian Vasquez.
Bocuse D'or is a culinary competition held in Lyon every other year. It's often described as the Olympics of cooking. Proceeds of the dinner went towards The Bocuse d'Or USA Foundation which trains the American team for the competition. There were two seatings for the night (6.30pm and 9pm). We opted for the early bird seating because I don't like to go to bed on a full stomach. Foodies came out in droves to attend the event. Foie protesters also made their way to Providence, protesting the unethical treatment of animals and the presence of foie gras on the menu. They were a rather civil crowd but they did get louder later on, kind of like that drunk person that talks louder and louder as the night wears on. Thankfully there was no red paint splashed on diners. 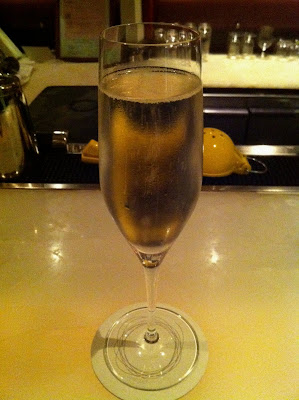 I started with a glass of bubbly at the bar while waiting on my friend. 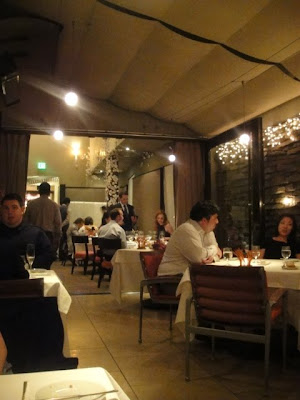 There are several private dining rooms in the restaurant, and a patio area where we were seated. 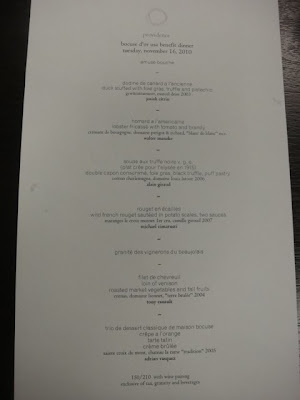 The six course Tasting Menu was priced at $150/$210 with wine pairing. 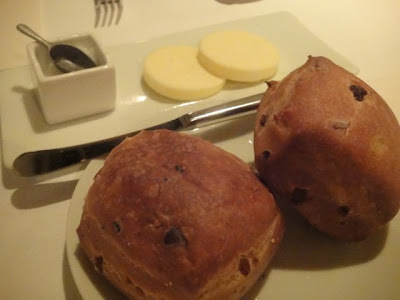 We started with my favorite bacon bread. The bread was light, almost like a bread roll, so I ended up eating more pieces than I had wanted. 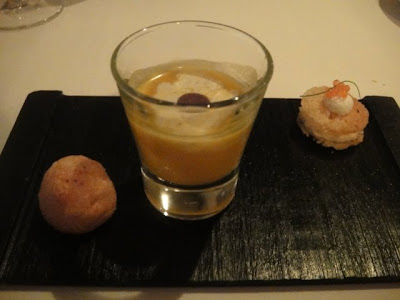 The gougere was airy with a hint of gruyere. The pumpkin veloute was creamy but I didn't really taste the truffle. It seemed that the truffle was there more for a textural effect. The salmon mousse with creme fraiche and roe was light and delicate. 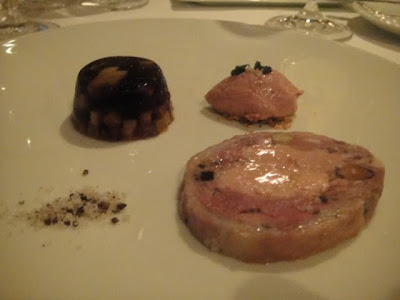 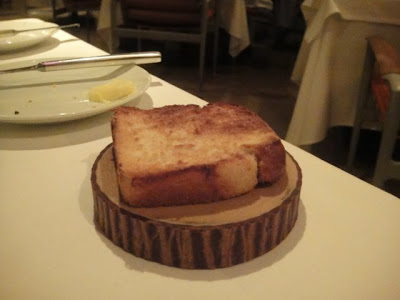 The trio really showcase different preparations of duck liver. The duck stuffed with foie gras and pistachio was fun play on a terrine. The foie mousse was like silk on my tongue. I also enjoyed the buttery toasted brioche. The duck gelee with artichokes was my least favorite. It was a bit gelatinous and runny, and under seasoned. The trio was served with a big, bold Gewurztraminer. 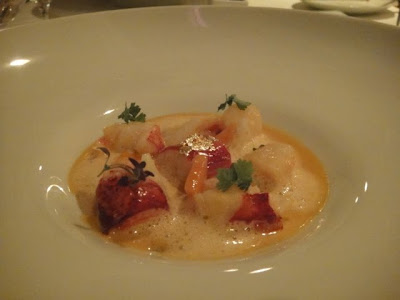 The fricasse was infused with a variety of mushrooms (button, morel, porcini) and was very rich in flavor. It tasted like a bisque, except that the fricasee was served lukewarm. We would have preferred a bit more temperature as it congealed a bit towards the end. The chunks of lobster were topped with 20 carat gold flecks. I thought the flavors of this dish were spot on, and I enjoyed every last drop. 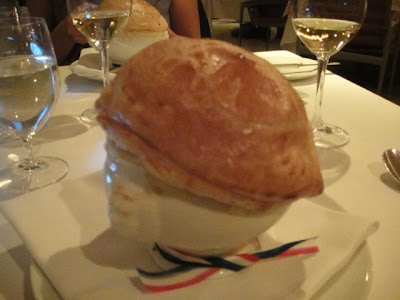 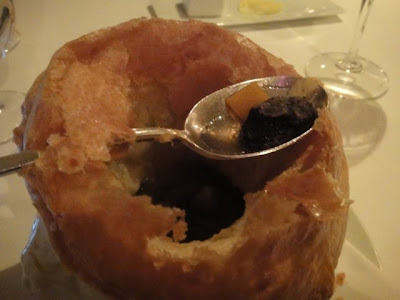 The consomme was one of the richest broths I've had because it was infused with cubes of foie gras and truffle. I was surprised to see the very generous serving of whole black truffles in the dish. The foie flavor really stood out and the broth wasn't too salty. My favorite was of course, the puff pastry which was light and buttery. The French really know their pastries. 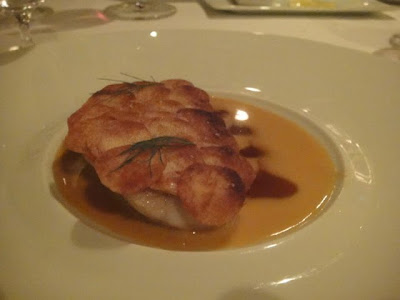 The rouget was cooked perfectly and covered with "scales" made of potato coins. I really liked the potato coins which were thin and crispy. You might remember a similar dish on Top Chef Season 3 when the cheftestants were required to replicate Le Cirque's signature dish, Paupiette of Sea Bass. In fact, ex-Le Cirque chef Daniel Boulud noted that the inspiration for the dish came from Paul Bocuse. The delicate fish was served with a rich sauce made with orange rosemary and veal jus. 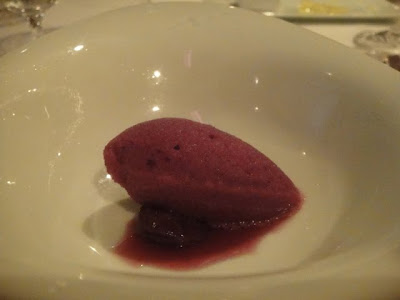 The macerated cherry was topped with a very strong alcoholic Beaujolais sorbet. 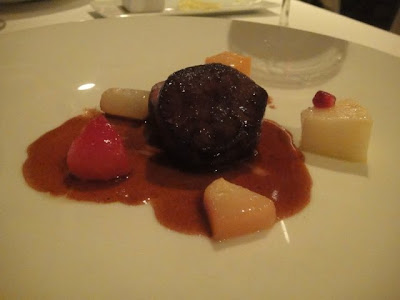 I thought this was the simplest dish of the menu, both in flavor and in presentation. The venison was well seasoned but overcooked and rather tough, especially on the outside. I did like the selection of roasted vegetables which included pomegranate celery root, squash, salsify, pickled beet and fig. The Syrah that was paired with this dish had a peppery undertone. At this point, I was getting full so I only had a taste of each dessert. The creamy Tahitian Vanilla creme brulee was the winner. The crepe was relatively light but smothered with thick, sweet sauce. The apple tart was a bit too sweet for me but I ate the entire buttery crust. 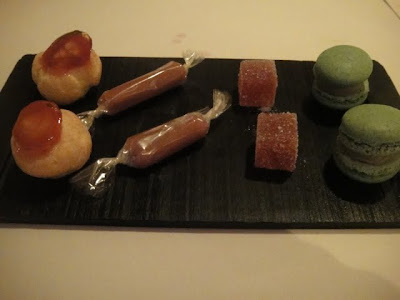 The Bocuse D'or USA Benefit Dinner was a nice culinary event. It was lovely to be in the presence and taste the work of so many well known chefs. The food was solid and almost everything was well executed. I particularly enjoyed this menu because I love French comfort food. Almost everything on the menu was rich and tasted just like home cooking. I have always been impressed with the service at Providence, and this time was no exception. The service was attentive and very professional, yet friendly. Overall, a lovely evening where thankfully, everyone got to enjoy their foie gras in peace. Somewhat.

kind of daunting to walk through all those protesters no?

I like some of that Soupe aux truffle... please

bagnatic - i was lucky cuz when i got there, there were only a few of them, and when I left, they had dispersed. Phew!