When you're winery hopping, be sure to feed the stomach so you can hit up more wineries without passing out. But don't worry, Napa and Yountville dining needn't have to involve heavy meals and Michelin star ratings. There are a lot of casual, less pricey options.

1) Oxbow Public Market.
Our first stop was a mini version of San Francisco's Ferry Building which houses a number of stores including restaurants, wine shops and gourmet food stores. This is the perfect place to pick up picnic items if you're planning to lunch at a winery. 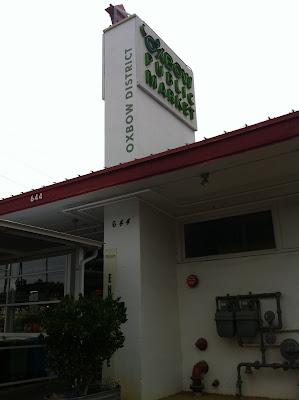 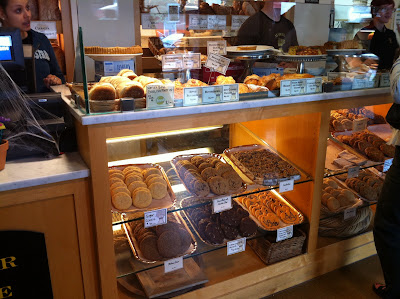 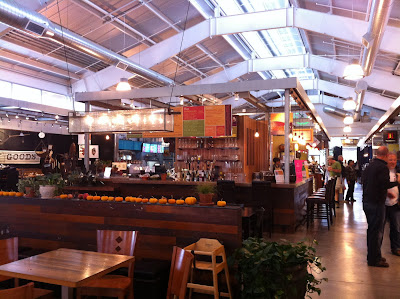 2) Model Bakery
Located on the other side of the building is Model Bakery where we decided to stop in for some baked goods. It's original location is in St. Helena, and is apparently a local favorite. 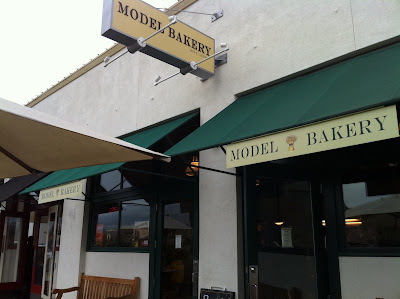 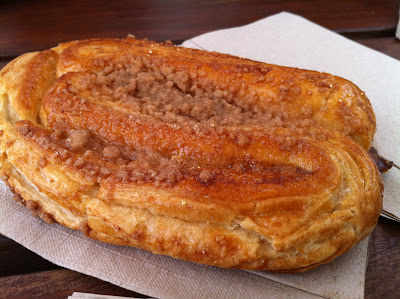 Unfortunately they ran out of croissants (at 10.30am!) so I settled for the Butterhorn. It was sort of like a palmier which was coated with cinnamon and brown sugar. The butterhorn was ordinary and very dry. I always finish my pastries but this wasn't worth the calories. 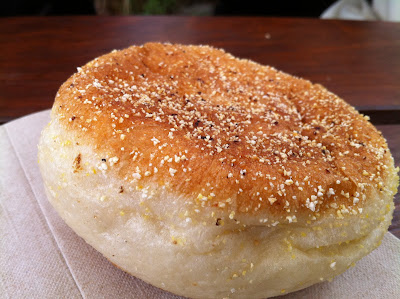 Model Bakery is known for their English Muffins. In fact, it was featured on Food Network's "The Best Thing I Ever Ate" as Michael Chiarello's favorite. It was fluffy and tasted like a donut. I think it would have tasted better if they had warmed it up because it tasted a tad bit stale. It was only 10.30 in the morning. Additionally, you had to ask for butter or jam, upon which they gave you one pre packaged jam packet. Somehow, I had expected that they would make their own jam. 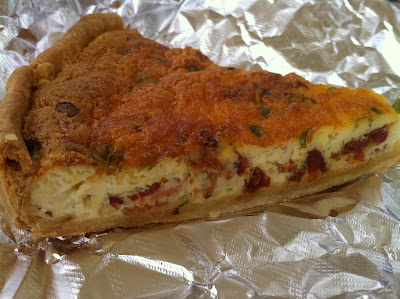 The quiche was also served at room temperature. Once again, it would have been better warm. Thankfully, it tasted alright. The crust was buttery and the filling was not overly cheesy and had specks of bacon and sun dried tomatoes. 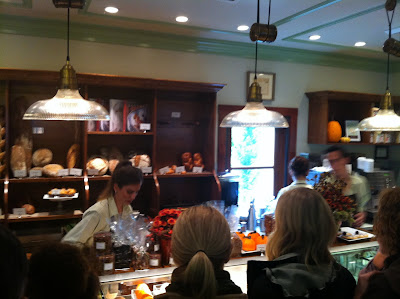 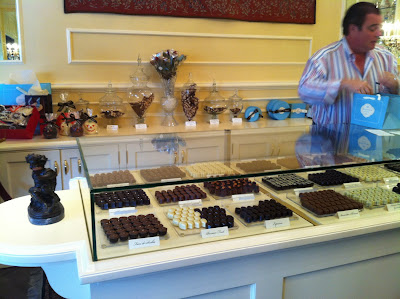 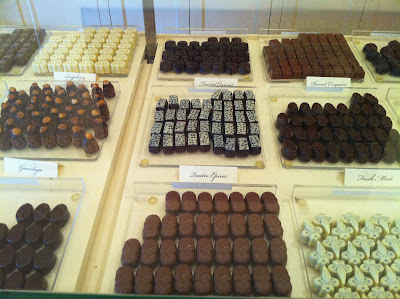 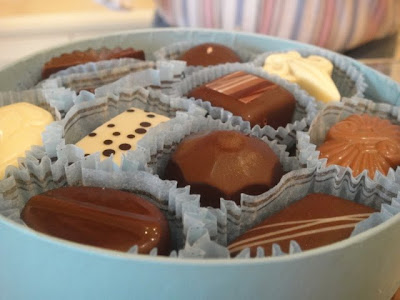 There are just so many to choose from such as brown butter ganache, gianduja (similar to a ferrero rocher), praline noisette, Thai ginger, toasted coconut. The chocolates are handmade, hence pricey at almost $2 a piece. They do however wrap up your selections in a pretty box with ribbons.

4) Bottega Restaurant
Michael Chiarello's restaurant, Bottega is located in the V Marketplace in Yountville, a stones throw from Bouchon Bakery. 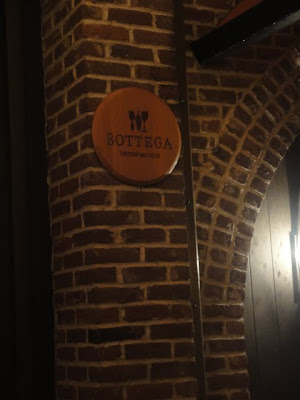 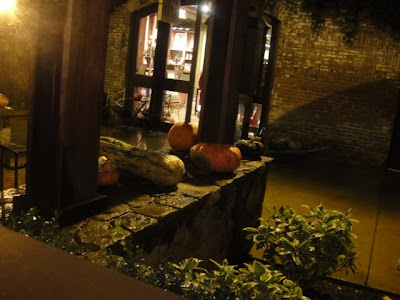 We managed to grab couch seating out on their patio. 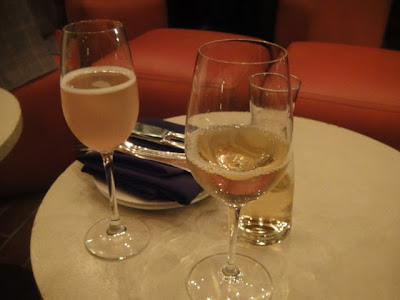 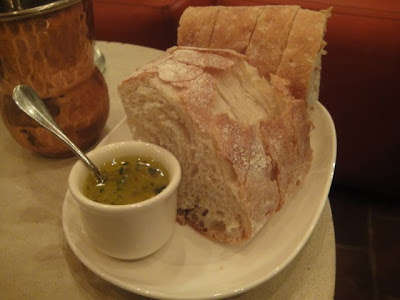 The complimentary crusty bread was warm and served with the most amazing oil that was infused with garlic, age Parmigiano-Reggiano and parsley. I just wanted to buy a jar of that stuff. 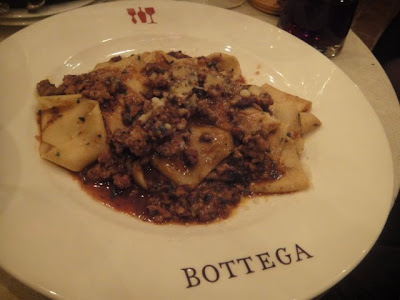 Housemade Egg Pappardelle with veal, pork and porcini mushroom Bolognese, rosemary and Parmigiano Regiano
Even though we were full from our lunch at The French Laundry, we had to sample one of their dishes. The pasta was fresh and supple. The bologense was rich and meaty. I liked that they incorporated mushroom into the meat mixture. Unfortunately the bolognese lacked seasoning. 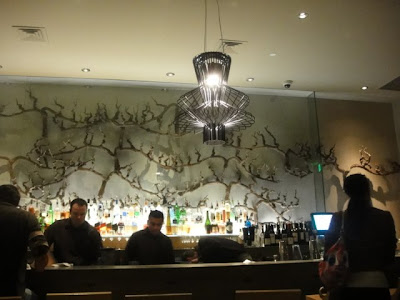 The bar fits right into a Miami club scene. So do the oversized couches. 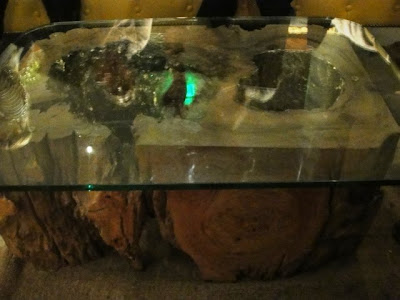 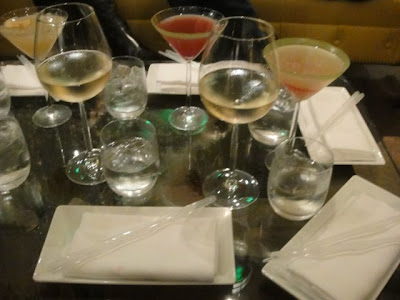 Greentini (charbay green tea, sake, lychee syrup, lemon) and Pinot Grigio.
The Greentini was not too sweet and the different flavors married nicely. The added touch was a dusting of green tea on the rim of the glass. 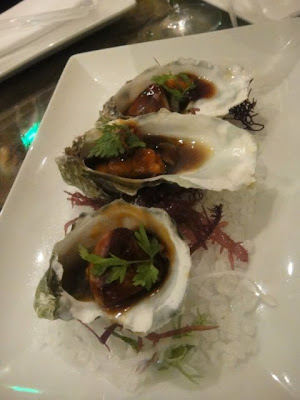 Oyster foie gras- market oysters, foie gras, uni, teriyaki sauce
I couldn't ask for a better combination - two of my favorite things: foie and uni. I thought the teriyaki sauce would be too sweet but it was a perfect marinade for the oyster. I really enjoyed the richness of the foie and uni that gracefully sat on top of the oyster. 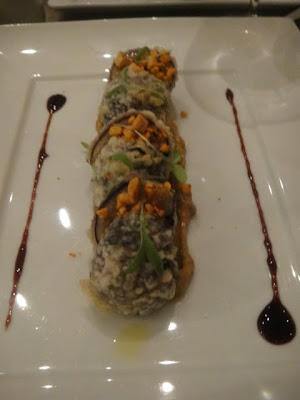 Fig Tempura with foie gras peanut butter sauce, pomegranate reduction
We were completely wowed by this dish. Who would think to pair peanut butter with foie gras? The fig was also juicy and sweet, and perfectly coated with tempura batter which gave it a nice crunch. The peanut butter sauce had a spice to it, and the whole dish was made complete with the sweet, intense pom reduction. Everything worked well together for the perfect bite. This combination was definitely something we had never tasted before, something that is quite rare for frequent diners like ourselves. 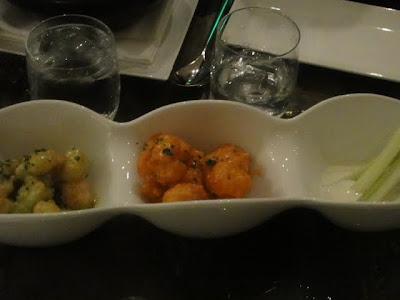 Rock Shrimp tempura with spicy kochujan sauce, wasabi aïoli
Although rock shrimp tempura is common in many izakayas, I liked the spin on this dish. Instead of introducing the buffalo and wasabi flavors through an aioli, they coated the shrimp in the two flavors. The shrimp itself was plump, and the wasabi and buffalo flavors were not pungent or vinegary. 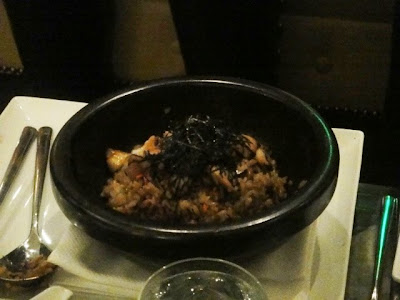 Ishi yaki buri bop - yellowtail on rice cooked at your table in a hot stone bowl
We actually shared a table with another party and this was what they ordered. They seemed to enjoy their yellowtail on rich dish which was mixed together tableside like a bibimbap. The rice was mixed in with vegetables and a raw egg. The egg and raw fish cooked up from the heat of the rice.

The food at Morimoto wasn't cheap by any means, appetizers were in the high-teens, but I didn't mind paying the price to experience the creativity of his dishes. Morimoto showed me something I haven't seen before (foie + peanut butter + figs, foie + uni + oysters) and I was excited to sample more on the menu. In all honesty, I wasn't sure if a Japanese restaurant was a good dinner idea in wine country. I was wrong. Morimoto is so much more than a Japanese restaurant. The cuisine is modern, it's trendy, it's innovative. And with a cool bar scene, this is what Napa had been missing.


6) Bouchon Bakery
The next day, we picked up some baked goods for the ride home. After being burned by Bouchon Bistro on two occasions and slightly underwhelmed by Ad Hoc and The French Laundry, I still felt the need to give Bouchon Bakery and Keller another chance. 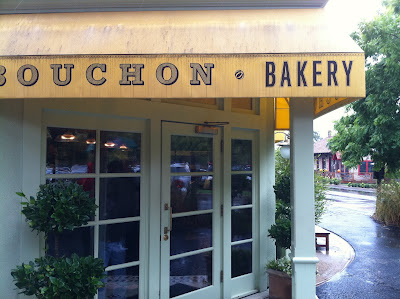 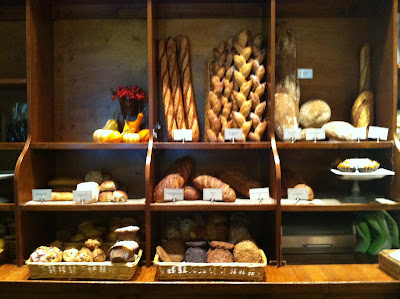 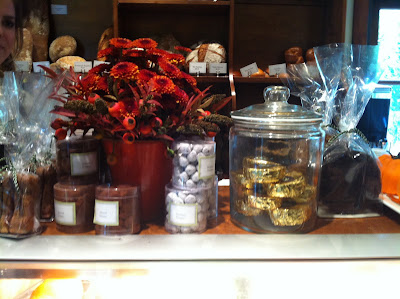 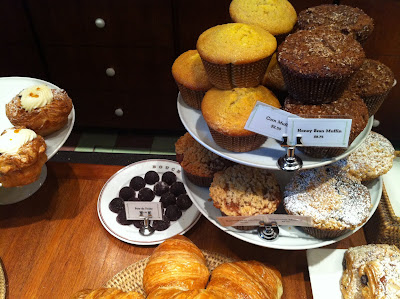 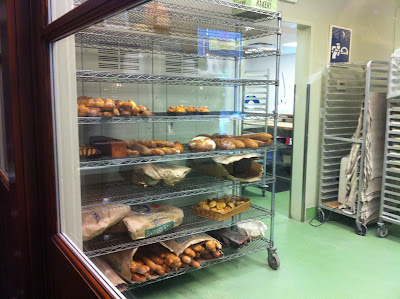 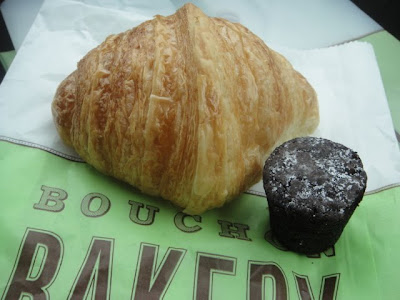 The croissant was good, but I think Bite's and Amandine's are buttery, flakier and tastier. I also tried their signature Chocolate Bouchons. They were like little brownies but not overly sweet. 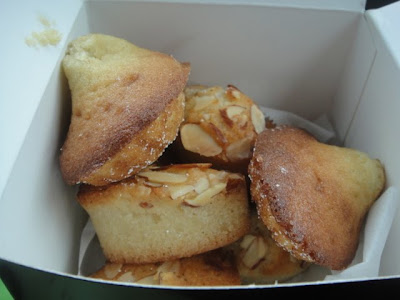 You ate like a champion! A shame the noodles at Bottega were under-seasoned. They looked so good on my screen ;-)

i kinda got excited with your morimoto descriptions. i need to travel north. it's been way too long.

Bagnatic - Yeah I was impressed with Morimoto. It just seemed different from what I've had in a while