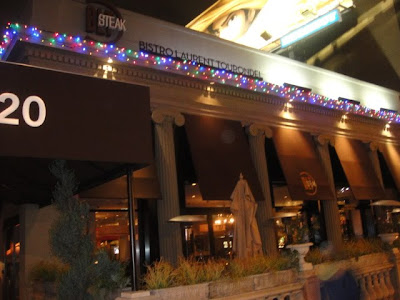 My favorite type of happy hour is upscale happy hour. Even though I'm always on the lookout for good dining and drinking deals, I'd rather pay a couple bucks more for a nicer glass of wine (thanks, but I'll pass on that Sutter Home) and good bar bites that do not include nachos and potato skins. I'd also prefer to hang out at a bar area that isn't crowded with college kids and that doesn't smell of puke. Lastly, valet preferable, please. BLT Steak hits the mark on all points. Plus its on my way home from work.

BLT (Bistro Laurent Tourondel) is the restaurant group with numerous restaurants around the country. Although Chef Tourondel is no longer with the organization, the menu still remains the same. BLT Steak focuses on upscale American steakhouse fare with French influences. It's Los Angeles outpost is located on the Sunset Strip in West Hollywood. 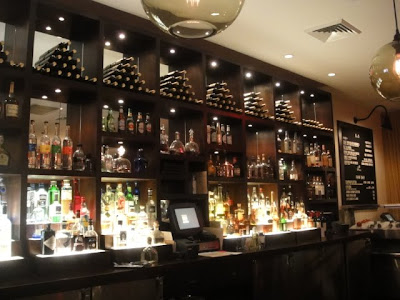 The restaurant has a surprisingly decent sized bar area with seats at the bar and a couch area. 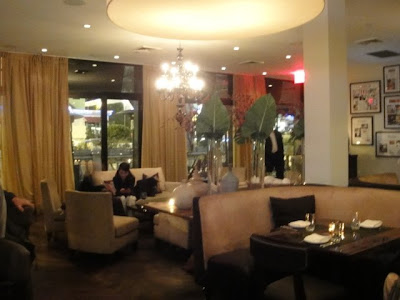 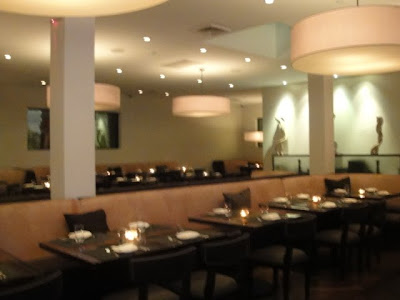 The dining area was empty when I arrived at 6pm but filled up by 8pm. That's pretty good for a Tuesday night. 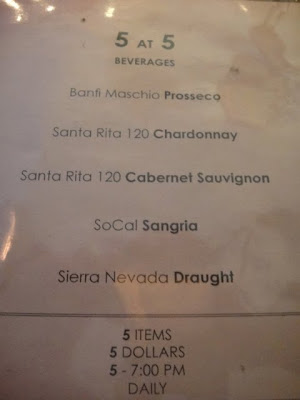 Happy hour runs daily from 5-7pm with 5 drink choices at $5 each. 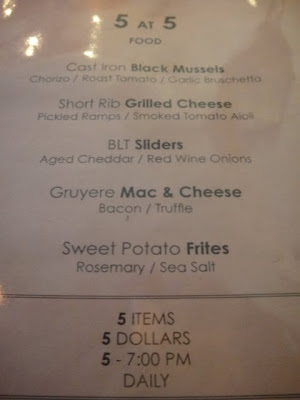 Their food menu also includes 5 options at $5 each. With three of us in our party, we ordered one of each item. 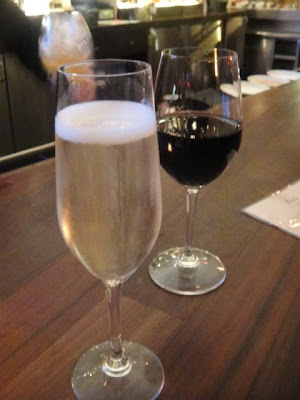 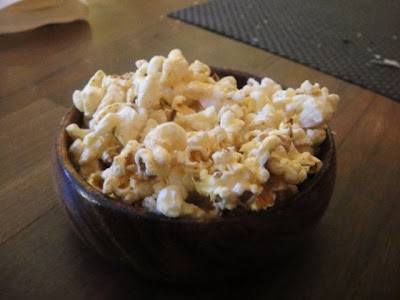 Popcorn with cajun seasoning and butter. 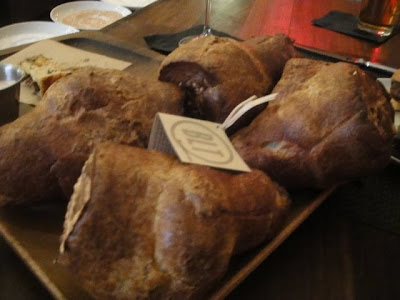 We asked for their signature popovers. I was blown away with the size of the inflated popovers, somehow I imagined them to be tiny, like gougeres. They were served with a tiny card with the recipe listed. 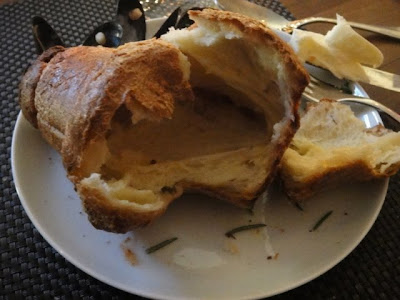 The popovers were warm and airy, with a light essence of gruyere cheese. 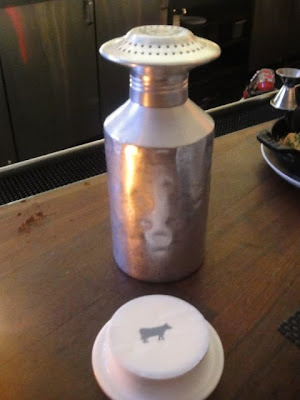 The popover should be eaten with a pad of their soft European butter and a sprinkle of sea salt. 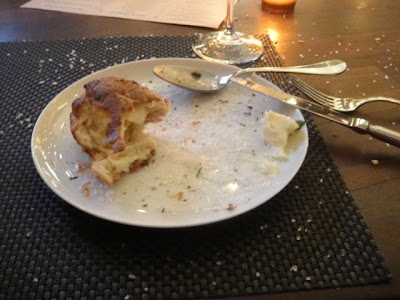 Just be careful with the salt shaker. I caused a salt disaster which our awesome bartender Andrew had to clean up after. 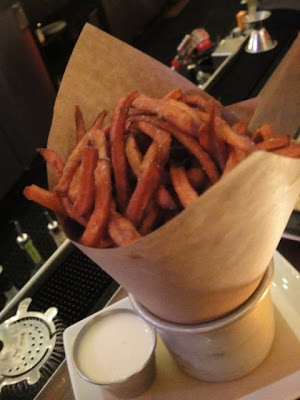 Sweet Potato Frites, Rosemary, Sea Salt
This was a large serving of fries. I liked that the fries were thinly cut and not starchy. They could have been crisped up a bit more, because they were a little limp. The fries were served with a blue cheese sauce. Wish they had mentioned that because it looked like ranch dressing. 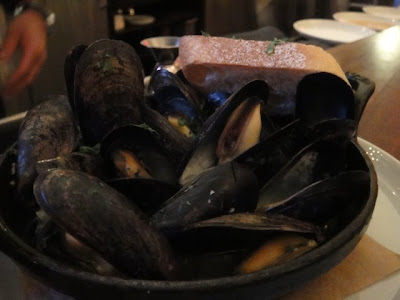 Cast Iron Black Mussels, Chorizo, Roast Tomato, Garlic Bruschetta
This was a pretty large serving of mussels for $5. The mussels were cooked well and plump. I also liked the smokiness from the chorizo and the sweetness of the tomatoes. The broth perhaps needed a bit more seasoning or butter, because it wasn't flavorful to the point that I wanted to dip the bread into it or drink up every last drop. 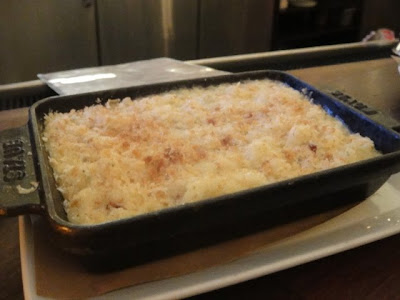 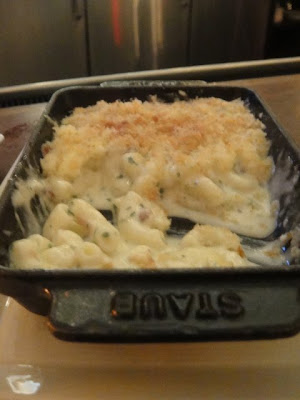 Surprisingly for someone that doesn't like cheese, this was my favorite dish of the night. The cheese was rather mild and was almost milky rather than cheesy. The mac and cheese was infused with truffle and salty bits of bacon. The best part of the dish was the toasted breadcrumb topping. 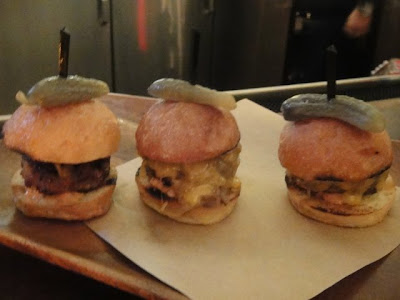 BLT Sliders, Aged Cheddar, Red Wine Onions
I thought my beef patty was cooked well, but my friend's was a bit charred. The aged cheddar added nuttiness and the caramelized onions really brought a sweetness and texture to the slider. 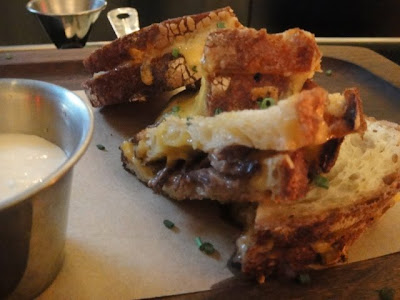 Short Rib Grilled Cheese, Pickled Ramps, Smoked Tomato Aioli
Even though I don't like cheese, I can tolerate aged cheddar. So I took a bite of the grilled cheese with much apprehension. I was quite happy with the dish. I really liked the sharp aged cheddar together with the tender shredded meat. My only criticism was that the bread was too crusty so you might get jabbed in the roof of your mouth. 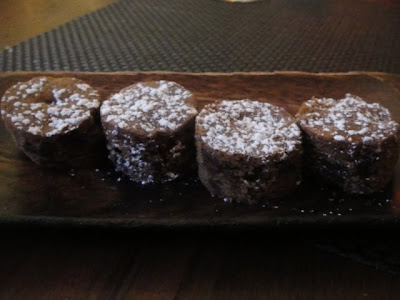 Chocolate mocha brownies (complimentary from our bartender) was a nice sweet bite to end the night.

The happy hour at BLT Steak is really an awesome deal. Wine, and delicious and filling bar bites for $5 each is really a steal. It's so refreshing to find a happy hour spot that offers good wine and a selection of food that can sum up to a satisfying meal. Service at the bar was also friendly and helpful, not something you would expect from most upscale restaurants. So next time when you're looking for an after work bar, drive away from Cabo Cantina and head over to BLT Steak. I promise, if you end up with a hangover, it's because you can afford more glasses of wine with your paycheck. It won't be because of the crappy sweet margaritas offered at your nearby watering hole.

very amazing,The complimentary popovers are the rage, but after that the food is okay. One of us had the Kobe burger, which came overcooked for medium rare. I had the braised short ribs which were heavily seasoned and piping hot. Accompaniments potatoes au gratin and creamed spinach were greasy and salty. We also ordered dessert, cheesecakes, which were delicious and EXPENSIVE.very nice seafood Naples

This is happy hour??? I want this meal!

Check out Urban Solace next time you find yourself in SD. They make mac n' cheese 2 ways.... both awesome!!!

ewww puke? oh those were the days.

love menus that offer everything at the same price.

Bar none, best HH in WeHo & surrounding. I mean, HHs are great, but HH on Saturday is greater.

And there are always popovers! That's really priceless.

I've had dinner here, and the steaks/service rivals most of the celeb steakhouse in LA.