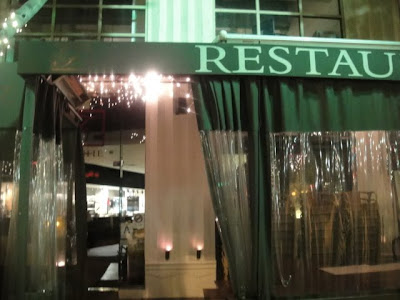 Fraiche Restaurant was my go-to happy hour spot when I used to work in Culver City. I've also had dinner there, as well as their other location in Santa Monica. From what I recall, the food was good but not outstanding. So when news broke that Chef Benjamin Bailly left Petrossian for Fraiche, I was excited to give the restaurant another try. Thankfully theminty secured a reservation for our party which included gastronomnom, amy, veronica and karen.

I've been to Petrossian during dinela week, and enjoyed my meal. In fact, it was that meal that restored my love for pork belly, which at the time had been on every restaurants' menu. Prior to Fraiche and Petrossian, Chef Bailly spent years at L'Atelier de Joel Robuchon in Paris and Las Vegas. Since heading up the kitchen at Fraiche a month ago, he's steered the menu to a French focus, and has lowered prices in order to make the restaurant more accessible, and cater to a larger demographic. This is definitely a change from Petrossian, which menu boasts of caviar, foie and truffle. 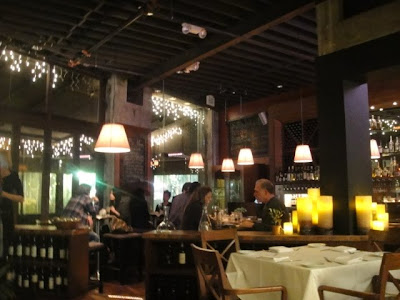 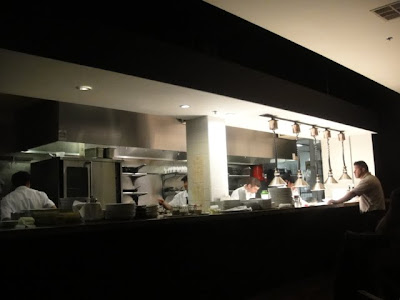 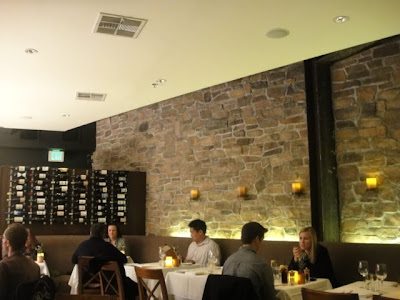 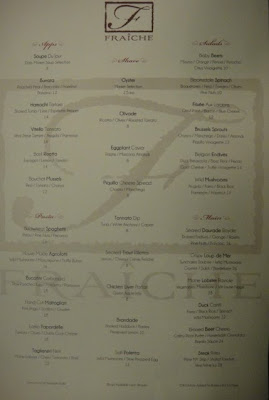 The menu is categorized into appetizers, salads, potted jars, pastas and main courses. Since we were a party of six, Chef Bailly prepared a tasting menu (with wine pairing) which was served family style. 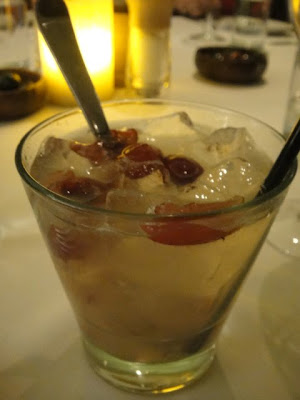 The Grape ~ Vodka, Elderflower Syrup, Grapes, Lime
This is my favorite cocktail at Fraiche. It's sweet, strong and very drinkable. 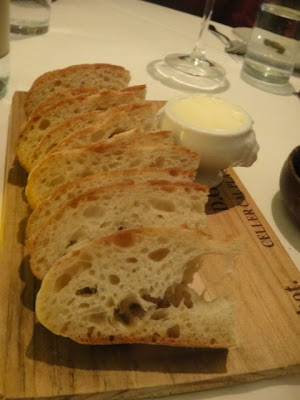 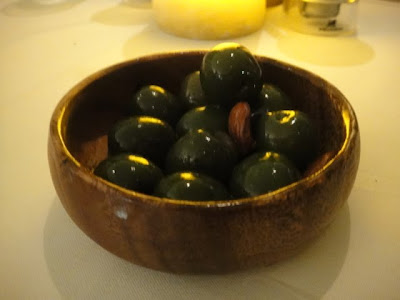 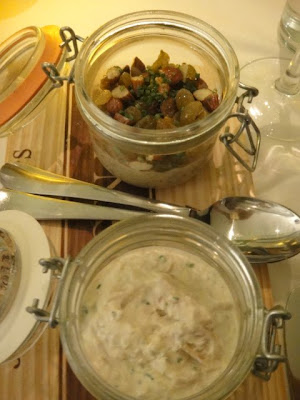 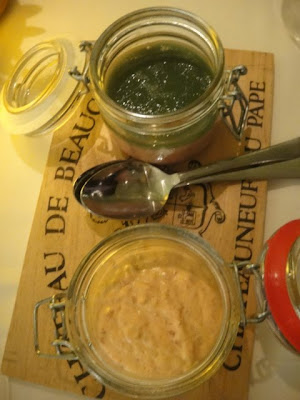 Naturally, the liver parfait was my favorite. The liver flavor was distinct but not intense. Surprisingly, the eggplant caviar was my next favorite. I thought the raisins added a sweetness to the dip and the almonds added a crunch. The tuna dip on a crusty bread was a creamier version of a tuna salad sandwich. Lastly, although I'm not a cheese fan, I found the piquillo cheese spread rather mild in cheese flavor. It also packed a spicy punch from the chili pepper. The potted jars are a great way to start a meal. It's great that we got some variety, from liver to veggie, fish and cheese. 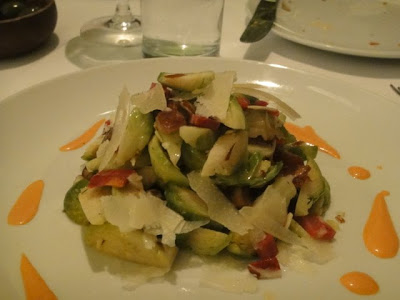 Brussels Sprouts ~ Chorizo, Manchego, Dates, Almonds, Piquillo Vinaigrette
The brussels sprouts were blanched and dressed with a sherry vinaigrette. This was a more complex representation of the normal brussels sprouts and bacon dish. 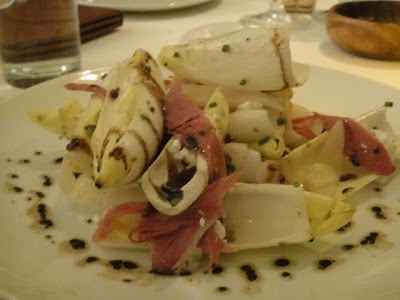 Belgian Endive ~ Duck Bresaola, Bosc Pear, Pecan, Goat Cheese, Truffle Vinaigrette
I didn't dive into this salad as eagerly as my dining companions did because goat cheese was littered on every piece of endive. The truffle essence was strong in this dish, in a good way. 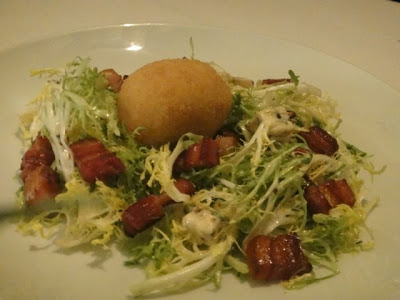 Frisee Aux Lardons ~ Oeuf Pane, Bacon, Blue Cheese
After I was able to pick out the blue cheese crumbles, the rest of the salad was a delight. The egg was breaded and fried, with a runny yolk that really held each bite of frisee together. 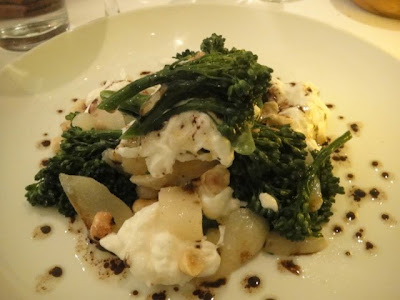 Burrata ~ Poached Pear, Broccolini, Hazelnut, Balsamic
My favorite of the salad dishes. The burrata was very fresh and creamy, and lightly dotted with tangy balsamic dressing and sweet poached pears. 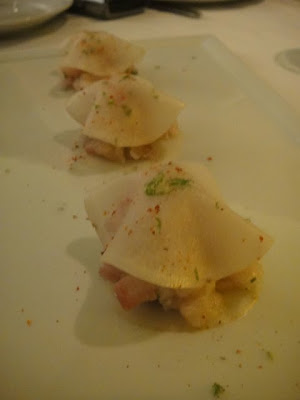 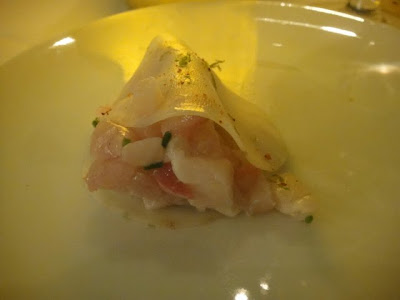 Hamachi Tartare ~ Shaved Turnip, Lime, Espelette Pepper
The cubes of fresh hamachi was topped with a thin slice of turnip. This dish was paired with a citrus Sancere that was necessary to cut through the fattiness of the fish. 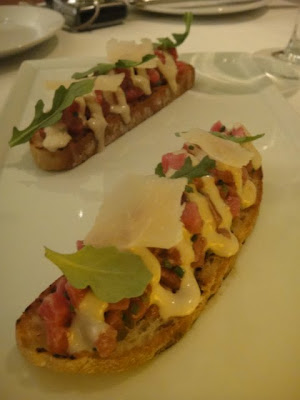 Vitello Tonnato ~ Veal Steak Tartare, Arugula, Parmesan
The veal tartare was tender and fresh. The meat was buttery and literally melt in my mouth. I liked that it was simply paired with aioli, peppery arugula and salty Parmesan. This was such a successful combination. Even Veronica, who shuns veal, went in for seconds. 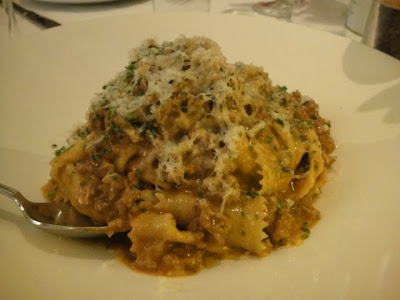 Hand Cut Maltagliati ~ Pork Ragu, Scallion, Gruyere
We all commented on how fresh the pasta tasted, and that you could definitely appreciate that it's homemade. The sauce was a simple pork ragu which was very tasty and well seasoned. 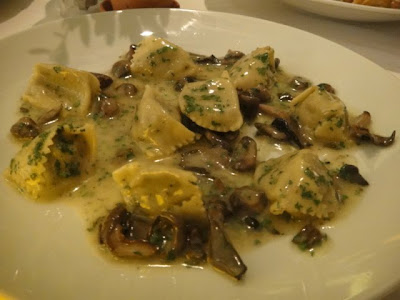 Home Made Agnolotti ~ Wild Mushrooms, Mascarpone, Truffle Butter
This dish was my favorite. The little pasta packets were filled with mascarpone and wild mushroom puree. The pasta was meaty that you didn't even realize that there wasn't any meat in the dish. The truffle brown butter sauce was flavorful and rich, and really brought this dish together. This is the type of dish I could devour on my own, and would gladly run 5 miles/day so that I could order this. 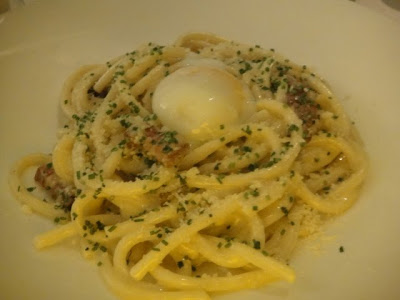 Bucatini Carbonara ~ Slow Poached Egg, Pancetta, Parmesan
Another favorite. This dish is so much better than a regular carbonara. The bucatini was cooked al dente and topped with a runny yolk that coated every strand of pasta. The creamy, rich sauce and meaty pancetta made this a rich dish. 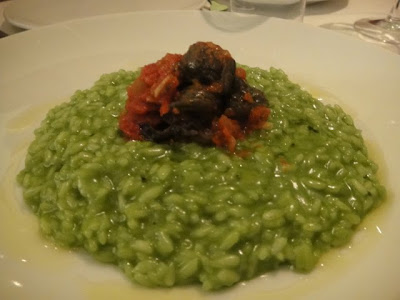 Basil Risotto ~ Escargot, Lemon, Tomato
Loved the colors of this dish. It reminded me of Christmas. The risotto was creamy but with a bite. It was well seasoned, and topped with an escargot ragu. 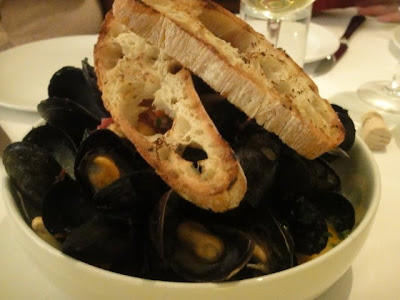 Bouchot Mussels ~ Pea, Tomato, Chorizo
Steamed mussels is a very classic French bistro dish and often can be overcooked. Thankfully, the mussels were plump and tender. 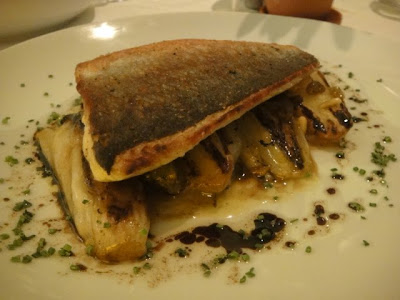 Seared Daurade Royale ~ Braised Endives, Orange, Raisins, Pine Nuts, Balsamic
I'm not much of a fish person but I can appreciate the simplicity of this dish. The endives were wilted and lost most of its bitterness. The savory dish was complimented with the sweet orange and raisins. After all the heavy pasta from the previous course, I appreciated the lightness of this dish. 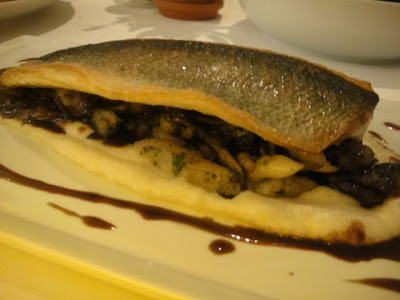 Crispy Loup de Mer ~ Sunchokes Soubise, Wild Mushrooms, Crosnes, Salsifi, Bordelaise
They did a great job of cooking the fish, ensuring that the meat was flaky while the skin was crispy. The crosnes tasted like a cross between parsnip and sunchokes. My favorite part of the dish was the sunchoke soubise which was creamy and velvety. 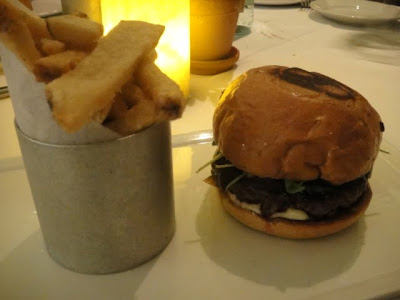 Truffle Burger ~ Onion Fondue, Boschetto Cheese, Truffle Aioli
At this point, our whole table was extremely full. But when they brought out the truffle burger (which the chef had raved about) we had to take at least a bite. There was a unanimous vote for the burger. The beef patty was juicy and tender, but it was the accompaniments that really elevated the burger. When you throw in truffle cheese, truffle aioli and caramelized onions into a burger, you really can't go wrong. 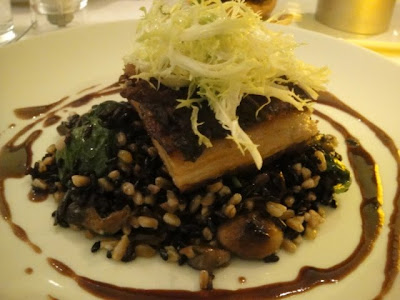 Kurobuta Pork Belly ~ Farro, Black Forbidden Rice, Cremini, Baby Spinach
Even though I was full, I had to sample the pork belly to see if it was as good as the one I had at Petrossian. This was, in fact, very delicious. The pork belly had the right amount of fat to it and the meat was fork tender. The frisee topping added a crunch and freshness to the dish. I also liked the texture of the forbidden rice. 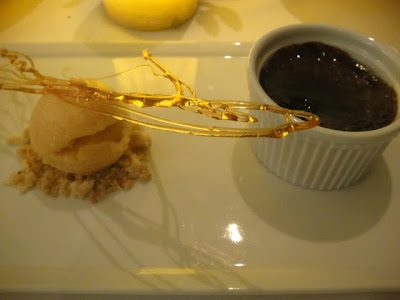 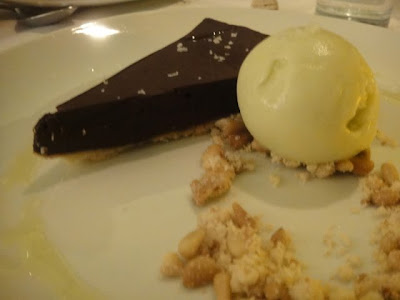 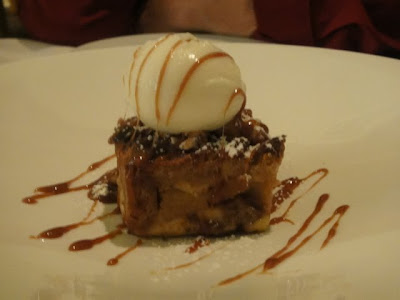 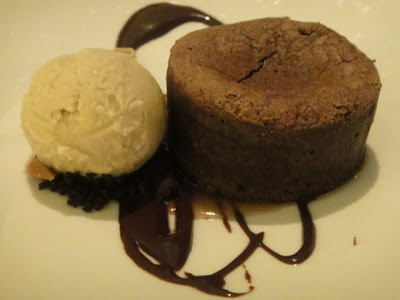 The desserts were all good, but I could only have a tiny bite of each. The panetone bread pudding was a crowd pleaser. We also liked the olive oil ice cream and the apricot sorbet. When Amy hinted to Chef Bailly that he should serve cinnamon ice cream for the holidays, he came back with just that. A scoop of cinnamon ice cream. Apparently there was some left over from a Thanksgiving dinner. The wine pairing of Muscat and Port was the perfect nightcap.

Fraiche is such a nice welcome (again) to the area. It's solid French comfort food that actually warms your stomach, is refined but at reasonable prices. After three hours of dining, we walked away extremely full, but very impressed with the meal. The pastas and tartare were my favorite but everything else was top notch as well. It's not just that the food was executed perfectly. It's not just that the food was delicious and left you wanting to doggie bag leftovers because you were already full. It's not just that even looking at the photos causes me to drool. It's because this is the type of meal that you just cannot forget. We were all tweeting about it all night and the following day. That's when you know that the meal, company and night was impressive and memorable.

What an amazing and beautiful meal! I always loved Fraiche (and always stuffed to the bone upon exiting). Glad to know its still kick and delicious.

Fraiche looks awesome! That's a really good review. Would you consider sharing your thoughts and photos on www.dishfinders.com

This looks like an amazing meal! Will definitely have to call up Fraiche and see if I can get a custom-menu done too! If you don't mind me asking, how much did this run you?

jealous. words cannot express how jealous i am.

Wow! I keep missing various dinners at Fraiche and this just kicked my longing into high gear