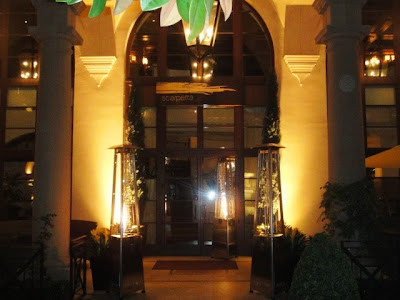 Over a month ago, Scott Conant opened up another outpost of his popular Scarpetta Restaurant at the Montage Beverly Hills, across the manicured gardens from Thomas Keller's Bouchon and a couple blocks from Rodeo Drive. Conant has built a strong brand for his restaurants, with locations in New York and Ontario. He has also been all around the tube on The Food Network channel, with guest judge appearances on Chopped, Top Chef and is currently the host of 24 Hour Restaurant Battle. 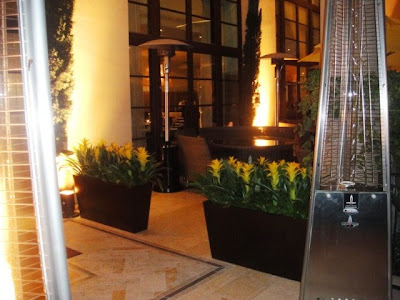 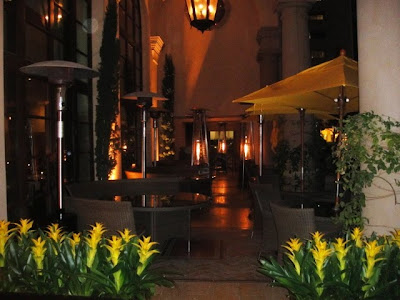 When I had called to make reservations two weeks prior, the receptionist mentioned that there were no 7pm or 7.30pm slots open (only 6.30pm or 8pm were available). She said that they blocked out the hour between 7-8pm as that is their most popular time slot. When we arrived at 7.45pm, the bottom floor of the restaurant was completely empty, save for two tables. I thought that was a pretty poor reservation policy. 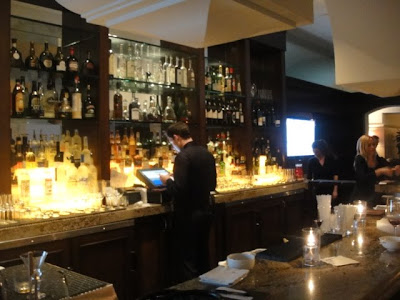 We decided to grab a drink at the bar adjacent to the dining room. 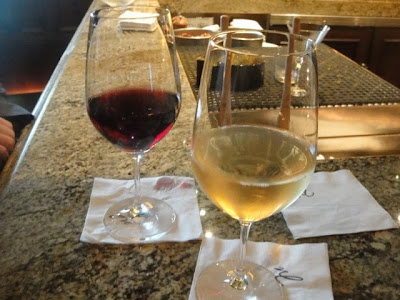 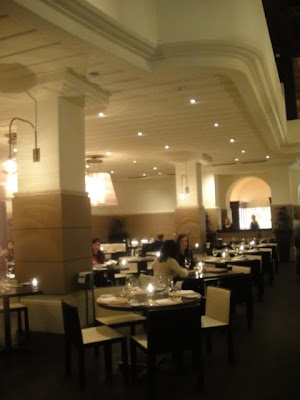 The dining room was modern but a bit sterile. My friend compared the beige color palette to that of a restaurant at a Hilton.

After perusing the menu, we didn't think any of the entrees really stood out. The pastas however, were all enticing so we decided to order a few starters and pastas to share. 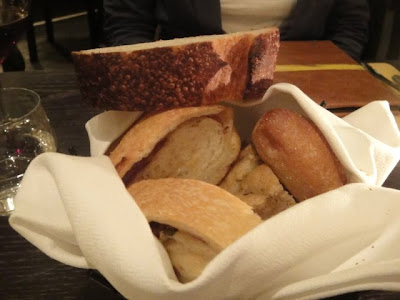 Scarpetta's bread basket is pretty well known and loved. The selection included filone (Italian bread), foccacia, ciabatta and stromboli. The stromboli (filled with salami, smoked mozzarella, cherry tomato and basil) was the most interesting but overall, I thought the bread was quite ordinary. 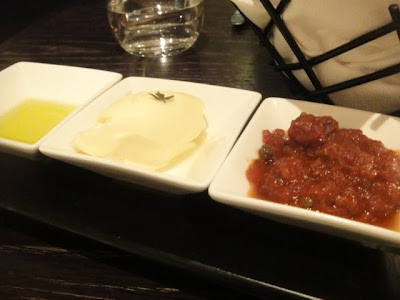 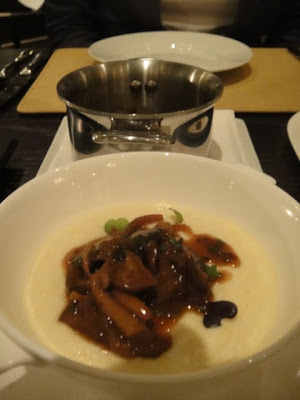 Creamy Polenta ~ fricassee of truffled mushrooms
This was a crowd favorite. It was absolutely decadent, infused with loads of cream and butter. The mushrooms added an earthiness and saltiness to the polenta. The flavors were rich and very comforting. This is a dish that I would definitely order again. 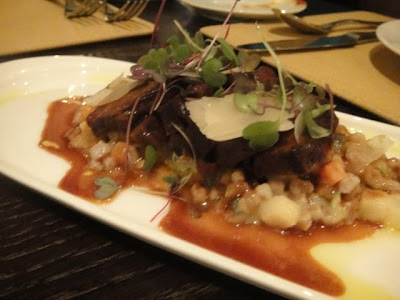 Braised Short Ribs of Beef ~ autumn vegetable & farro risotto
The short ribs were tender but under seasoned. Thankfully the shaved Parmesan added some saltiness and nuttiness to the meat. I liked the texture of the farro and it wasn't too creamy or rich (which isn't a bad thing especially after the heavy polenta dish). 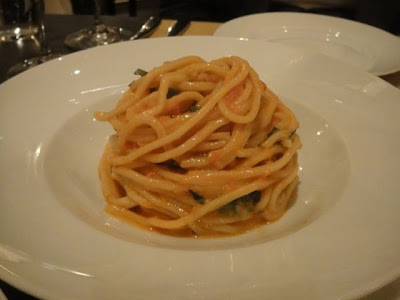 Spaghetti ~ tomato & basil
Scarpetta's signature dish. Many claim it is worth every penny of the $24. The pasta was simple, served with fresh roma tomatoes and topped with Parmesan cheese. The pasta itself was cooked perfectly al dente, the way it's prepared in Italy. The sauce clung on to every strand of the toothsome pasta. It seems that everyone raves about this dish but apart from the spaghetti itself, I didn't think the sauce was anything special. I can appreciate the simplicity in dishes, but the sauce just tasted like fresh and slightly raw tomatoes. I didn't yearn for one more bite. 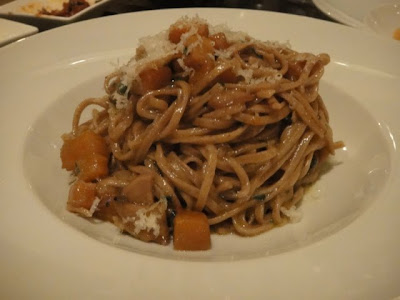 Toasted Spelt Pasta alla Chitarra ~ pumpkin, porcini and asiago
Similar to the spaghetti, I also enjoyed the actual pasta in this dish. Once again, you can really taste the freshness of the pasta. Unfortunately the sauce was over salted and tasted strongly of olive oil as though the sauce wasn't reduced enough. The chunks of pumpkin did not seem to combine well with the pasta. It was slightly sweet but didn't compliment the overly salty pasta sauce. It also seemed like a garnish, an afterthought. 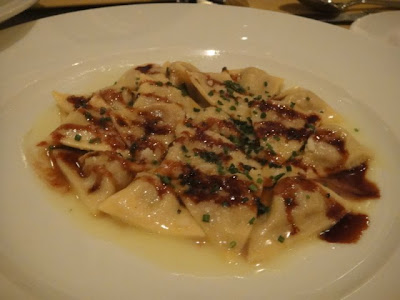 Duck & Foie Gras Ravioli ~ marsala reduction
I thought the presentation was elegant and the pasta petite. I enjoyed the rich and meaty duck and foie gras filling which was part creamy (from the foie) and part stringy (from shredded threads of duck meat). The filling was rightfully salty, but the marsala sauce added an overpowering addition of salt. There were three in our party (two of us love salt, the other prefers less salt) and we all thought the three pastas were painfully over seasoned.

Apart from the polenta, everything else did not seem to be properly seasoned. The short ribs was terribly under seasoned while the pastas were seasoned with a very heavy hand. It seemed to us that it must have been a mistake of the evening. Since no other reviewer/blogger/diner we knew had complained about consistently over salted pasta, we came to the conclusion that the pasta chef of the night must either love salt, or is a heavy smoker with severely impaired taste buds. Truth be told, I didn't think Scarpetta's pastas were anything special. I thought they weren't well balanced and were heavily salted. I prefer the pastas at Osteria Mozza and Fraiche which I think, are significantly better and more reasonably priced. I'll know where to go when I get my next pasta craving while avoiding high blood pressure.

Know what you mean! Scarpetta was tasty, but not really anything special and definitely didn't worth the price. When there opening night and left a week's pay less...

Osteria Mamma does the trick for me :)

Wow, that is the most expensive spaghetti I've ever seen (the tomato sauce kind)!

Thanks for breaking the bank so that I won't have to. I appreciated your report very much!

After tasting all the delicious pastas at Fraiche last night, I'm not so sure I feel all that compelled to assault my bank account at Scarpetta any more - especially if they are a touch salty! I do want to check it out at some point, but I think I'm going to wait a bit and get my pasta kicks at Fraiche and Mozza in the meantime...