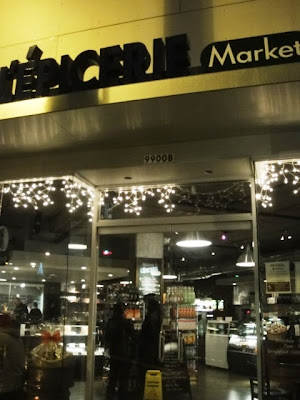 Thierry Perez really wants to set up roots in Culver City. He first opened Fraiche with Jason Travi in 2007. Then left abruptly. Next there was word that he would open his own restaurant in the area. But it never happened. Then it was discovered that he was involved with gastropub Waterloo & City a short drive away. But he dropped out. Shortly after, word broke that he was opening up a French Cafe & Market, a few blocks from Fraiche and across the street from Sony Pictures Studio. This last venture finally opened a month ago. L'Epicerie is more than a Cafe & Market. It's a wine shop and wine bar as well. 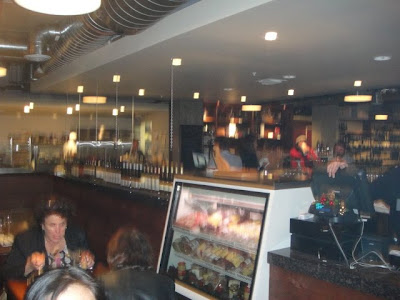 The space is rather large with an open kitchen. My issue was that despite the large exposed ducts, the ventilation was rather poor. It was smokey while we were dining in the restaurant, and my hair and clothes reek when I left. 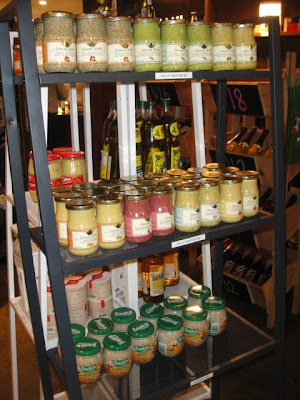 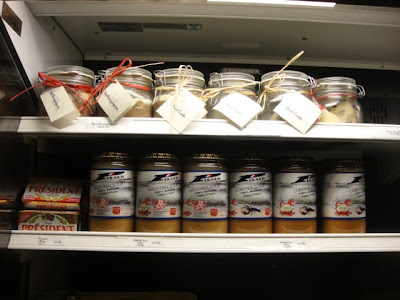 You can purchase jars of duck confit but they ain't cheap. 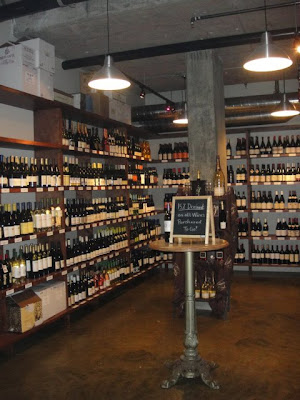 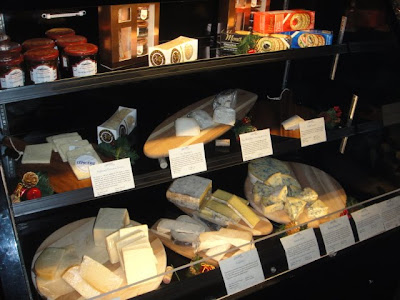 Fresh cheese and preserves are great takeout options for a picnic. 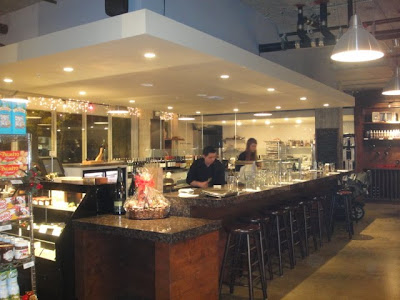 The wine bar is a great place to grab a drink and a few bites from their tapas menu. 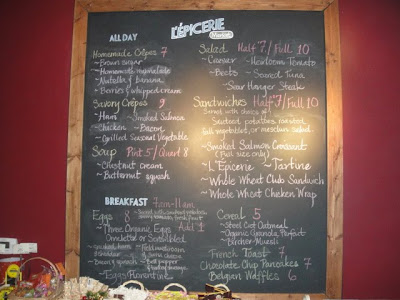 L'Epicerie serves breakfast, lunch and dinner which include crepe, salad and sandwich options. 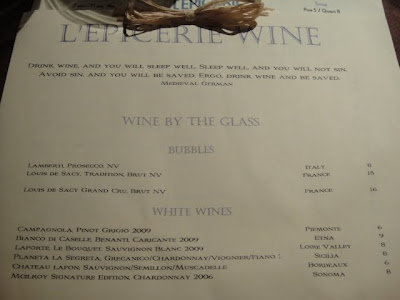 Their wine is very reasonably priced at less than $10 for most glasses. 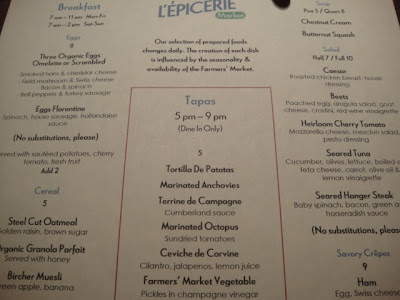 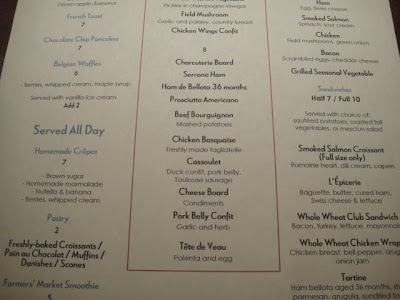 Their French inspired tapas menu is served from 5-9pm, where small plates are priced at $5 and large plates at $8. 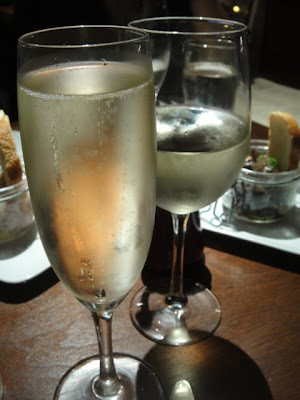 Perez brought by a complimentary glasses of champagne while we were waiting for our friend to arrive. 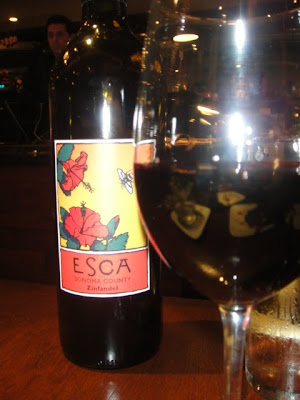 We also ordered a bottle of Esca Red Zinfindel which was rather smooth and balanced. 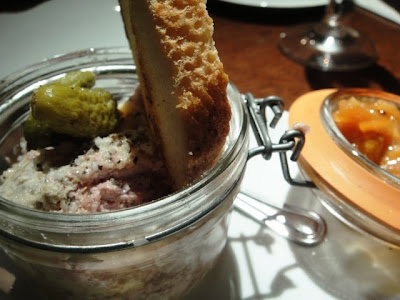 Terrine de Campagne, cumberland sauce
The terrine was harder that usual pate, the pork seemed almost confit with meat mixed in with a bit of congealed fat. It wasn't the most spreadable terrine but that meant you could eat it as is, without crostini, if you choose. The preserve tasted like kumquat and paired well with the fatty, heavy terrine. 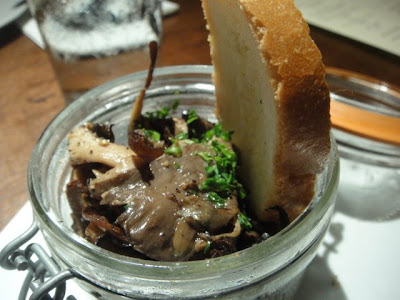 Field Mushrooms, garlic and parsley, country bread
Perez recommended this plate and brought one over on the house. I liked the selection of mushrooms which were fresh and woodsy. Although I think the mushrooms needed a bit more salt. 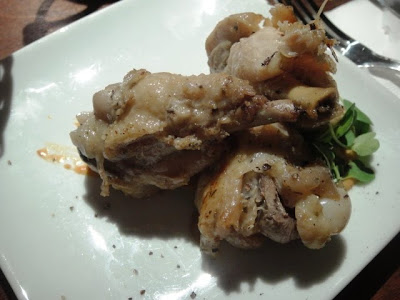 Chicken wings confit
The chicken drummettes was tender and fell off the bone. It was salty but had a unique flavoring that almost seemed like a smattering of Latin spices. 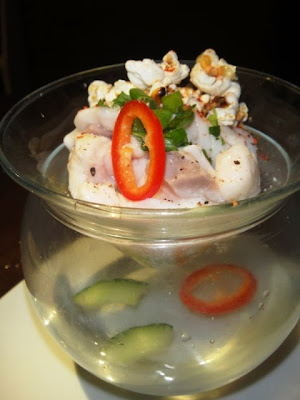 Ceviche de corvine, cilantro, jalepenos, lemon juice
This ceviche was made of seabass and prepared basque style. The dish was topped with pop corn which added a crunch and texture. The ceviche lacked the lime flavor of Mexican ceviche and perhaps needed a bit more salt. I also thought the seabass needed more seasoning. This was probably my least favorite dish of the night.

On to the larger plates. 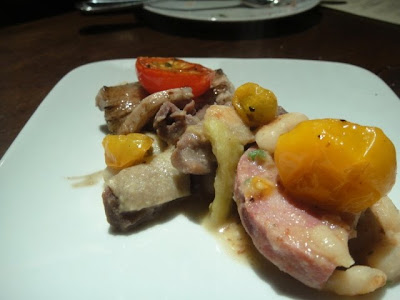 Cassoulet, duck confit, pork belly, Toulouse sausage
I was hoping this cassoulet would have been served in a pot for aesthetic purposes. But thankfully, the flavors were still there. The bean was stewed to a soft texture and the sausage was meaty and felt like comfort food. 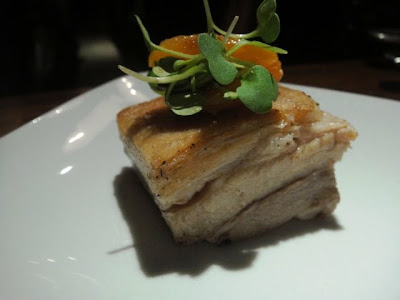 Pork Belly Confit, garlic and herb
I liked the simplicity of this dish. Often times, pork belly is stewed in a heavy sauce. This preparation really allowed you to taste the pork. Unfortunately the pork belly wasn't the easiest to split between four people. 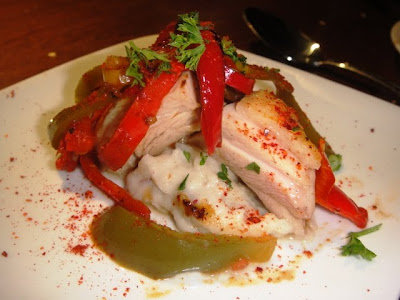 Chicken Basquaise, freshly made tagliatelle
The chicken was cooked well and was moist but the skin could have been crisped up a bit. I did like the spice seasoning on the chicken skin. It's interesting that the menu called for tagliatelle but the chicken was served on a bed of mashed potatoes of some sort, which I thought was a tad under seasoned. 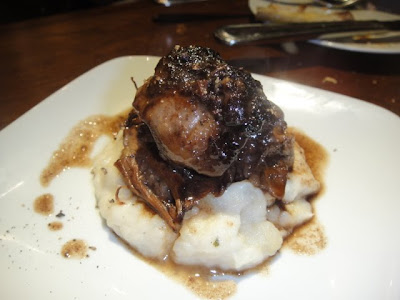 Beef Bourguignon, mashed potatoes
The beef bourguignon was cooked in a rich sauce that had a taste of caramel. The mashed potatoes were creamy and rich. Once again, the meat wasn't too tough but neither was it not fork tender. 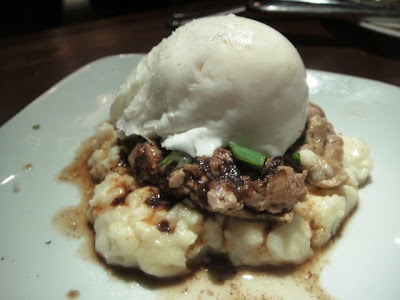 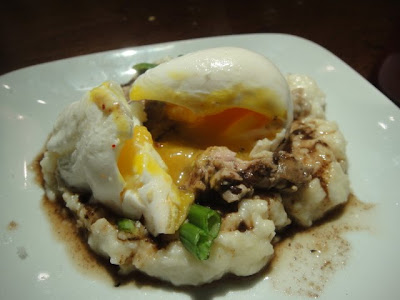 Do not be fooled. This isn't a vegetarian dish. The polenta was topped with crumbled veal brains. If you don't know French, "Tete" is head, and "Veau" is veal. Some may be turned away by this dish but it was my favorite. There were so many rich component to this dish. Runny egg yolk bound each bite together. The polenta was buttery and creamy. And the veal brain was well seasoned and with a delightful taste which was a cross between a mild liver and sweetbread. 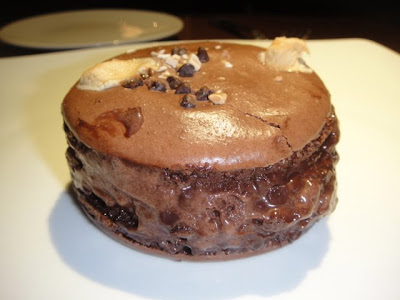 Rocky Road Ice Cream sandwich
The ice cream cake was sourced from Milk. It was made of a chocolate Macaron sandwich, chocolate ice cream with marshmallow filling. I'm not really a Rocky Road fan but I really enjoyed this dessert. 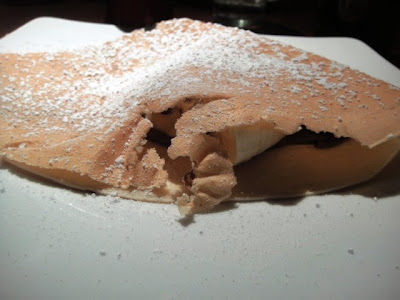 Nutella and banana crepe
The crepe was made to order. I liked the crispier ends of the crepe but some parts were a bit too thick for my liking. The nutty chocolate with banana was a nice combination.

L'Epicerie is a nice addition to the town. I liked that it's a casual joint with a small plates menu, instead of a more formal restaurant. I also thought the prices were really reasonable, and the menu items were a nice representation of French cuisine in less hearty portions. The polenta with veal brains really made the meal for me. It was bold. Overall the food was tasty and the whole French market/cafe/tapas concept is kind of refreshing. And in a town where we're driving to multiple places to fulfill our needs, it's nice to be able to pick up a bottle of wine, grab a drink, order a few bites and end the night with a ice cream macaron sandwich, all in one night, in one place.

Hit: polenta, nice concept
Misses: ceviche, some of the meats could have been more tender
Rating ***

the polenta sounds niiiiice. culver city sure blew up big time since i last lived there as a poor ucla student.