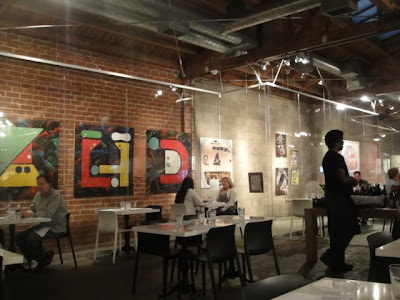 Joseph Mahon (recently of Bastide) and David Haskell (collectively known as Magnum Crew)'s latest pop-up gig was held from April 17-19 at Royal/T Cafe in Culver City. I signed up for the last night which was offering a special tasting menu, in addition to the regular menu, in celebration of Haskell's birthday. I was elated when I later discovered that the special offering would be a 7 course uni tasting menu. 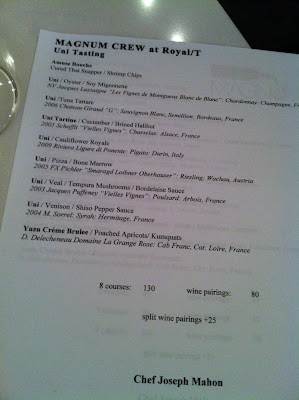 The special Uni menu totaled 8 courses (including dessert) and was offered at $130, with wine pairing for an additional $80. Because it was a week night, we decided to do the split which came up to $105 for two of us (or $52.50 each). Not too shabby, considering that the wines would be carefully selected by Haskell, who was owner of Bin 8945 and sommelier at Vertical Wine Bistro. 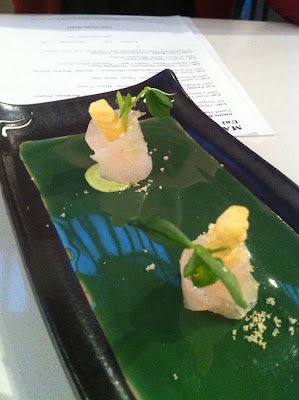 The cured thai snapper with shrimp chips amuse bouche had nice spicy kick and crunch. However I didn't care for the raw sprouts and I wished the snapper had been served more chilled. 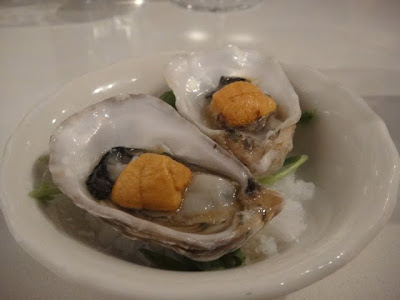 Uni/ oyster/ soy mignonette
I loved the seafood on seafood action here. The oyster actually tasted a bit fishy and similar to the amuse bouche, I thought it wasn't chilled enough. Unfortunately the uni flavor was lost in the fishiness of the oyster. 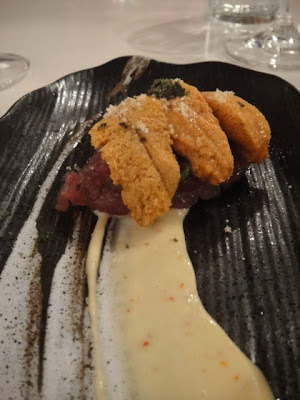 Uni/Tuna Tartare
I was excited to see three large pieces of uni, which were very fresh. I thought the tartare itself lacked seasoning, but was perfect when mixed with the aioli sauce. 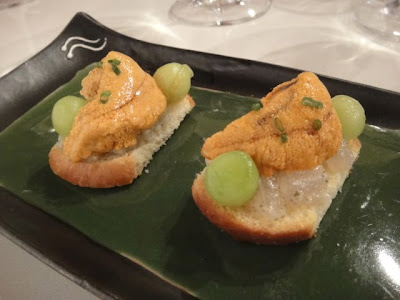 Uni Tartine/ Cucumber/ Brined Halibut
Big fresh pieces of uni was definitely the theme in the dishes. I liked the use of toast which made this into an uni crostini. The cucumber balls were refreshing. However, similar to the previous dish, the fish was rather flavorless. I'm not sure what it added to the dish as I would have enjoyed the uni on its own. 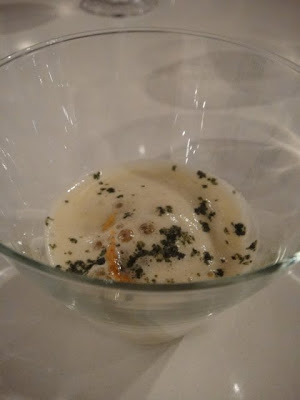 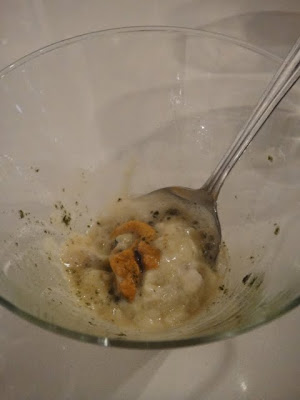 Hidden in the cauliflower puree were chunks of uni. The dish comprised of Apple cloud, nori powder, cream, apple chunks and cauliflower. The cauliflower puree was creamy and flavorful. I really enjoyed the flavors of this dish and thought this was probably the most unique dish of the night. I think the dishes got significantly better from this point on. 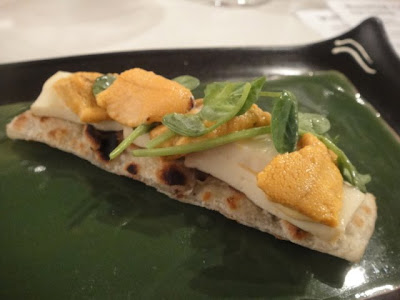 Uni/ pizza/bone marrow
The uni flatbread was very interesting. I liked the concept behind it and the ample amount of uni. The bone marrow wasn't gelatinous, fatty or gooey like what you would expect. Instead it tastes like plain tofu and looked like panna cotta. I wished that there was a buttery bovine taste. I also thought the microgreens were too raw in flavor. 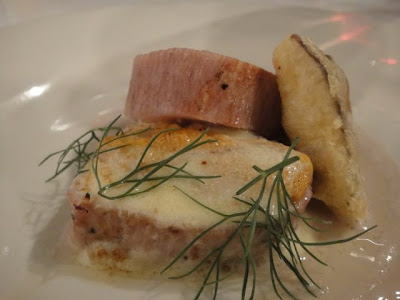 Uni/Veal/tempura Mushrooms/bordelaise sauce
The uni worked really well in this dish. It blended well with the bordelaise sauce so it allowed the veal to be the center of the dish but contributed its briny flavor to the creamy sauce. The veal was tender and the shiitake tempura was perfectly fried. I only wished there were more pieces of the tempura. 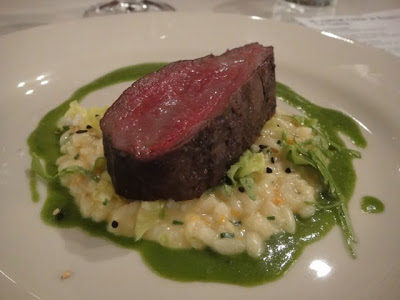 Uni/Venison/shiso pepper sauce
The venison was cooked perfectly to a point that it was soft enough for a butter knife to cut through. It was a beautiful piece of meat and was well seasoned. I didn't care for the raw lettuce, but I did enjoy the creamy and rich uni risotto. 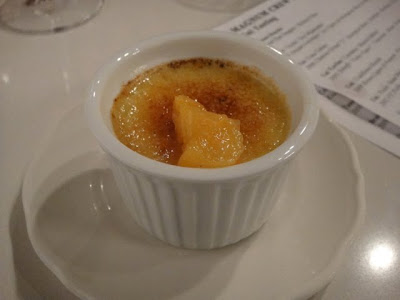 Yuzu Creme Brulee/ Poached Apricots/ Kumquats
The dessert unfortunately didn't include uni but it was a nice end to the meal. The dessert wasn't overly sweet and the kumquats added a tart finish.

I commend Chef Mahon on tackling a sea urchin tasting menu. I was impressed with the portions of uni in this tasting menu, they definitely didn't skimp on the urchin. I'm glad I had the chance to try out the menu- when will you ever get a chance to feast on a 7 course uni tasting menu? However on quite a few dishes, I would have preferred to have eaten the urchin on its own. Personally, I didn't think some of the other components enhanced the uni flavor, such as the fishy oyster (perhaps we got a bad one). In such cases, I would have preferred to savor the uni flavor in its original form. But overall, a unique dining experience and a great way to raise money for the sake charity.

Lol, I think you are the ONLY person I know who would be "elated" over a 7 course uni tasting menu ;)

Definitely a unique meal...but sounds like it wasn't quite as good as hoped?