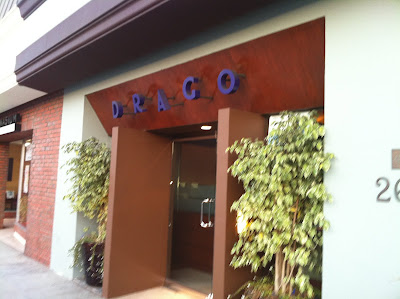 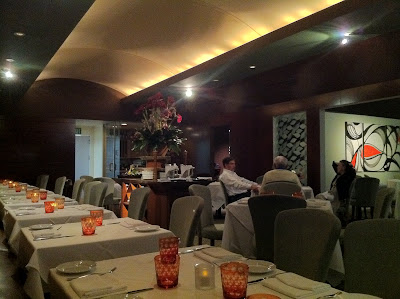 For a limited time only, Drago in Santa Monica is offering a duck tasting menu. 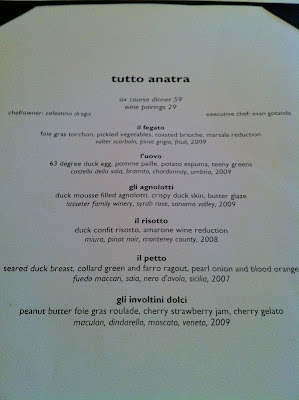 The tasting menu includes 6 courses for $59 with wine pairing for an additional $29. 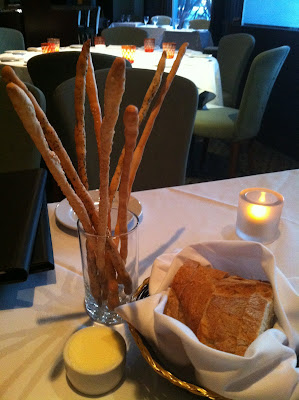 Our waiter prompted brought over breadsticks and fresh bread when we were seated. 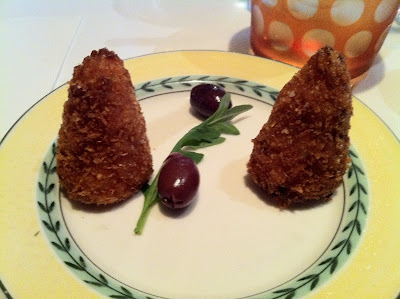 Amuse bouche of Arancini was served pipping hot and was comprised of mozzarella and tomato sauce. I liked the crispy breading which wasn't greasy. 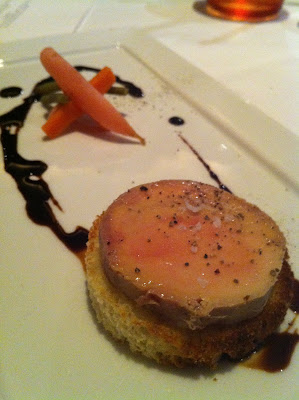 il fegato ~ foie gras torchon, pickled vegetables, toasted brioche, marsala reduction
valter scarbolo, pinot grigio, friuli, 2009
The torchon sat beautifully on a toasty brioche. The foie gras was really buttery and intense. You could tell that it was good quality foie that just needed a sprinkle of fresh cracked black pepper and sea salt. I usually see foie paired with sweet preserve so it was an interesting combination with the sour pickled vegetables and the tangy marsala sauce. 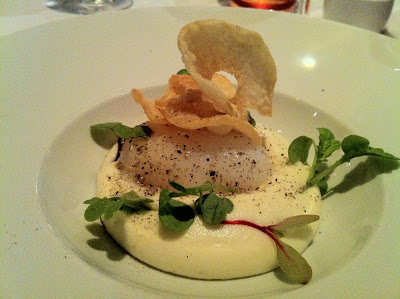 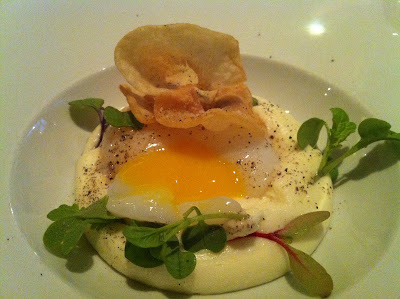 The yolk of the sous vide cooked egg was thick and almost gooey. The potato puree was lightly whipped and well seasoned. This was a rich but comforting dish. 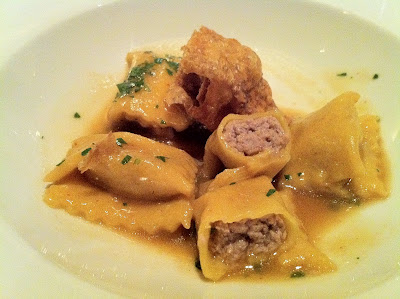 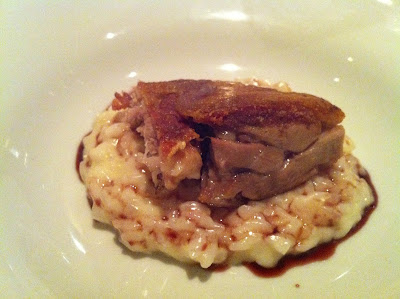 il risotto ~ duck confit risotto, amarone wine reduction
miura, pinot noir, monterey county, 2008
The duck was cooked to order and served hot. I was quite impressed with how well the duck was cooked. The skin was crispy and the fat was properly rendered, while the meat itself was juicy and tender. The duck sat on a bed of creamy al dente risotto which had an interesting marriage of sharp pecorino cheese and sweet wine reduction. 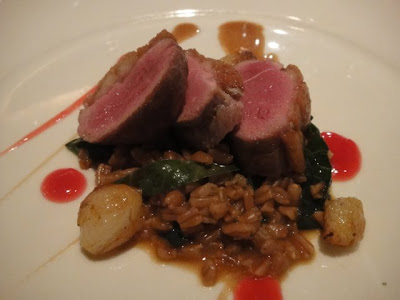 il petto ~ seared duck breast, collard green and farro ragout, pearl onion and blood orange
fuedo maccari, saia, nero d’avola, sicilia, 2007
The duck was beautifully cooked, pinkish in the center. As much as I enjoyed the duck, I also loved the accompaniments. The collard greens and the farro added nice textures and really did a good job of absorbing the flavors of the rich duck sauce. I also liked the cippolini onions which were not mushy or strong flavored. 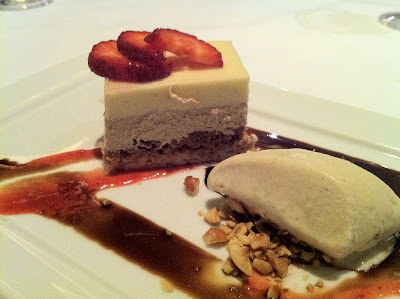 gli involtini dolci ~ foie gras and olive oil mousse, strawberry, black pepper gelato
maculan, dindarello, moscato, veneto, 2009
I was impressed that Drago had incorporated duck into the dessert course, which can be a very tough feat. The airy and salty foie gras mousse was sandwiched between a crispy wafer and a surprisingly mild olive oil panna cotta-like cream topping. I was pleased to see that a traditional restaurant such as Drago had offered a spicy black pepper gelato which was rather unique and the first that I've ever sampled.

I was extremely impressed with the duck tasting menu. Not only were all the dishes perfectly executed and well seasoned, but the price tag was very reasonable at $88 for 6 courses including wine pairing. The wine pours were generous. Although the wine may not be as good as some of the pairings I've had, it was a steal at $29 and there were some standouts such as the Miura Pinot Noir and the Moscato. The dishes came out rather quickly so I was concerned that the dishes had been pre-made but all the items came out hot and cooked well. It's interesting because based on the decor, clientele and elevator music, Drago seems to cater to a much older crowd (we were at least 20 years younger than anyone else in the room) but yet the tasting courses were updated and inventive. This menu is only available for a limited time but it's not one to be missed.

Wow... that's an amazing deal for $88! I can't believe you got all that food, foie and wine! Definitely something to quack about. Oh yes, I went there... :D

Lol! I'm with Diana. This deal is totally worth quacking about. Glad you had a superb dinner, Stuffy.

I didn't know there's even a Drago in SM. I love duck!

Oh, you guys quack me up!

I love duck. This tasting menu looks insanely good. And you're right, pretty sweet price tag for all that you get coupled with the quality.