Son of a Gun: hearty seafood from the Animal guys

When I first heard that Jon Shook and Vinny Dotolo of Animal Restaurant were opening up a seafood restaurant, I was hesitant. When I think of seafood, I think of healthy, steamed, typically not very filling. When I think of Animal, I think of meat, foie gras, sweetbreads, heavy & rich dishes. It still hasn't disappointed me to this date. And recently, I came to find that neither has Son of a Gun. True, there are more seafood dishes on the menu. But it's just as hearty, flavorful and satisfying as its sibling restaurant. 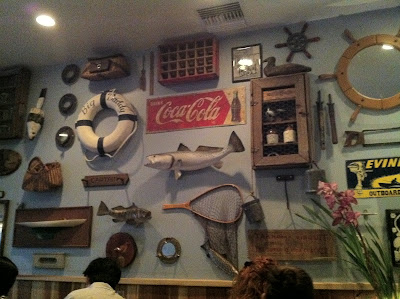 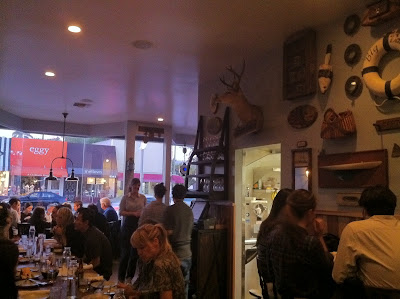 The walls are adorned with nautical props (life savers, fishing poles) as well as wildlife collections (Marlin and antlers). 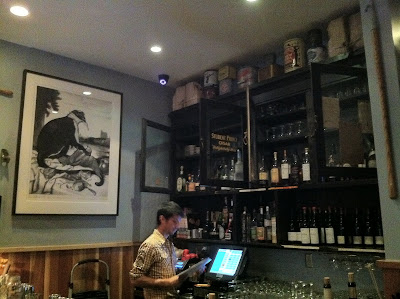 The restaurant is tiny, it seats 55 and half the seats are available through reservation while the other half are first come first serve. I was a bit bothered at the beginning of the night as we had reservations and had to wait 20 minutes for our table (on a Monday, no less). But the minute we studied the menu and was served the first course, all annoyed feelings went out the door. 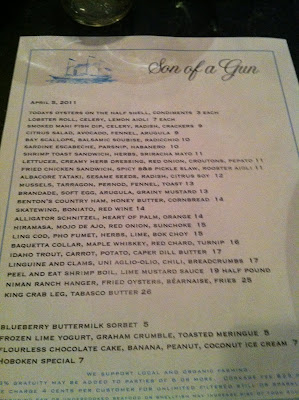 Similar to Animal, the food here is served family style. 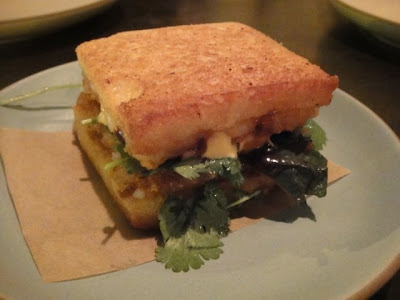 Shrimp Toast sandwich, herbs, sriracha mayo
This was one of the must-orders based on the reviews online. The airy bread was buttered and toasted, and was thinly spread with shrimp and spicy mayo. The cilantro and Vietnamese basil was sharp and fragrant. We enjoyed this dish so much that we had to get another order at the end of our meal. 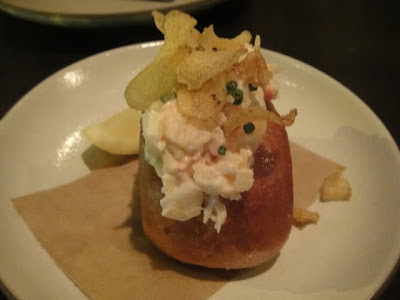 Lobster Roll, celery, lemon aioli
This was another crowd favorite. Many suggested getting one for each person (at $7 each). We shared two between three of us and I thought it was sufficient if you just wanted to get a bite. I appreciated the soft roll and the fresh chunks of lobster which was mildly dressed. The potato chip crumbles were a nice topping which added salt and crunch. Linguine and clams, uni aglio-olio, chili, breadcrumbs
This is one of the simplest pasta preparation: garlic and oil, which the kitchen added a twist to by incorporating sea urchin. To my disappointment, the uni was very mild and almost non existent. But despite the lack of uni flavor, the sauce was flavorful and creamy. I appreciated that the plump clams were extracted from their shell which made this easier to consume. Unfortunately, as with most of the other plates, the portion here was definitely on the smaller side.

Alligator schnitzel, heart of palm, orange
I was excited to try this dish. I love schnitzel and from what I recall from previous alligator dishes, alligator meat tastes merely like chicken. The alligator was pounded thin and coated with a breading that was well seasoned and not loose. It really did taste like chicken. The heart of palm was mixed with spicy jalapeño and dressed in an orange sauce. I really enjoyed the sweetness of the orange sauce which tasted exactly like a creamsicle. The creamsicle sauce surprisingly paired well with the fried schnitzel. 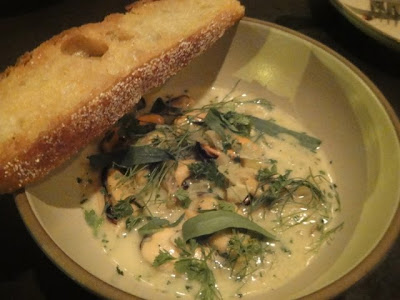 Mussels, tarragon, pernod, fennel, toast
I didn't think I would be wowed by this dish when I saw it. It looked like clam chowder. But in fact, the sauce was rich and creamy, with a tinge of tang. I only wished they provided more than one toast as the sauce was too good to waste. 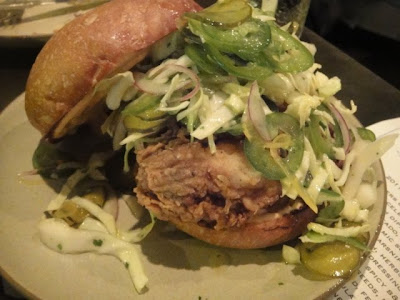 Fried chicken sandwich, spicy b&b pickle slaw, rooster aioli
Everyone online raved about this, and compared it to Chik-fil-A. Unfortunately I've only had the fast food chicken once so I can't make a comparison. I was glad to see that the portion was pretty large and could be shared between 2 people. The chicken was tender and nicely seasoned. I liked that the breading was crispy and not oily. The tender soft bun, pickles and spicy jalapeño completed the sandwich. 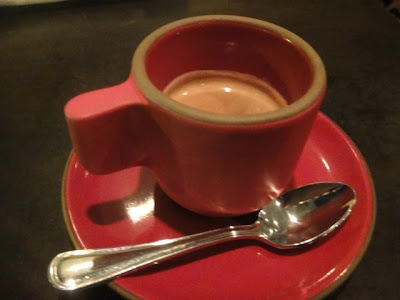 For dessert, I took a bite of this delicious peanut butter toffee bar that I bought from Magnolia Bakery across the street. 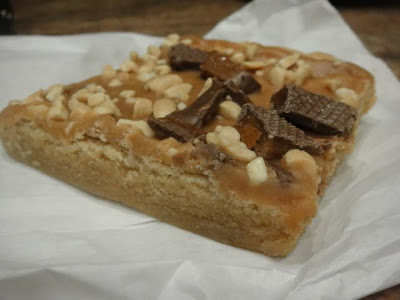 Son of a Gun is a great addition to the city. It good to see that the chefs can put out an exceptional meat-based menu at Animal, but can also cater to those that prefer a less bovine-menu at Son of a Gun. I was delighted that the food was not light or unsubstantial. The dishes all had really good and well developed flavors. For me, the mark of a good restaurant is when I am looking forward to coming back and trying more items on the menu. There were definitely more dishes at Son of a Gun that I'd like to try.
Hits: everything we ordered was delicious
Misses: portions can be small, 20 min wait
Rating: ***1/2
Son of a Gun
8370 W. 3rd Street
Los Angeles, CA 90048
(323) 782-9033 http://www.sonofagunrestaurant.com/

looks like our initial reaction to the restaurant and final thoughts on the food are mirrored :)

except for that peanut butter toffee bar of course! hahah good call!

That peanut butter toffee bar is one of my favorite treats from Magnolia Bakery! Aside from the banana pudding, of course.

I definitely need to walk over and try Son of a Gun soon - that shrimp toast has my name all over it! :)

Looks great. It's a place I need to check out one of these days.