Brunch at Fraiche: I'm still in love with this place 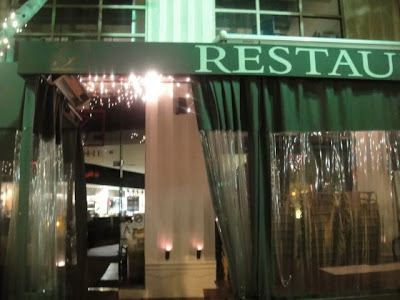 I was beyond excited when I saw that Gilt City was offering a 4 person mimosa brunch special at Fraiche in Culver City. #1 I love the new menu at Fraiche after Chef Benjamin Bailly took over the kitchen. I'm still dreaming about the agnolotti and bucatini carbonara that I had a couple months ago. #2 I love bottomless mimosas! 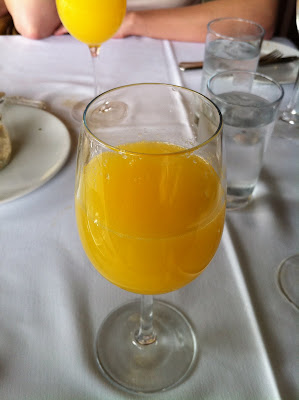 The first glass of mimosa came in a traditional flute, but our subsequent rounds were served in a larger glass. I'm already in love with this place. Again. 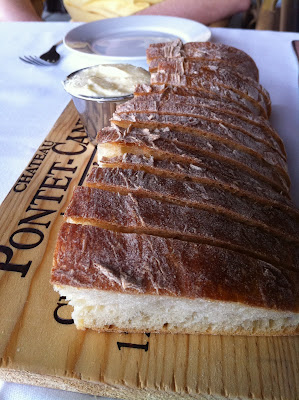 A large block of rustic bread with soft creamy butter was served. 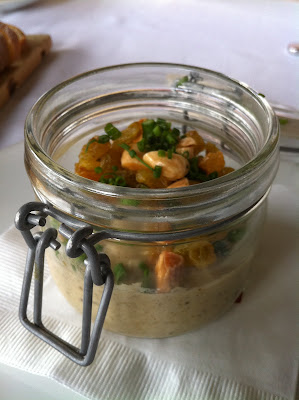 We got a supplemental order of Eggplant Caviar which I really enjoyed during my last visit. Do not be fooled, there aren't any Sturgeon roe here, but this was still delightful. The eggplant was pureed so it resembled a smooth pate. I loved the sweetness from the raisins and the crunch from the Marcona almonds. 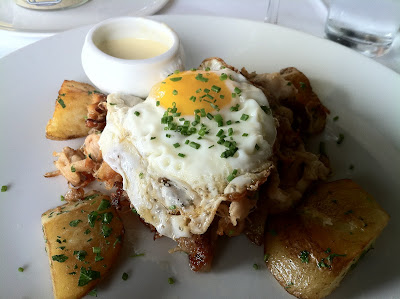 The Pork Belly Hash was a standout dish. The pork belly was shredded, not in chunks. It looked a little dry but was in fact juicy with a fair bit of fatty strands. The poached egg really tied everything together. I don't like mustard so I asked for the sauce on the side, however I was surprised to find the mustard sauce very mild and not off putting. 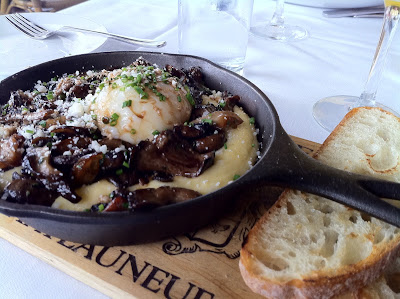 The Soft Polenta was luxurious and rustically served in a skillet. The polenta was perfectly cooked; not watery or gummy. The slow poached egg really richened the dish and combined well with the polenta. I also enjoyed the wild mushrooms which were well seasoned. The dish was topped with pecorino cheese which added a sharp flavor. This was an A+ dish that is so rich that you should share it with your dining companions but it'll be tough to give any away. 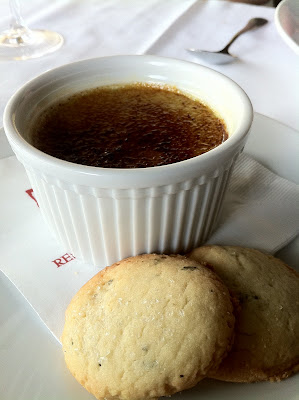 Pistachio Creme Brulee is a dessert that I had previously sampled at Petrossian (where Chef Bailly used to work) and Fraiche. I love pistachios so I appreciated this variation over a regular vanilla flavored creme brulee. The rosemary cookies were crumbly and buttery. 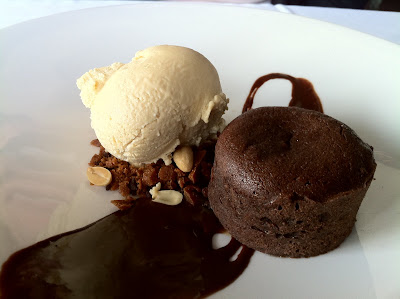 The Chocolate Coulant was extremely rich and decadent. It was served with crunchy toffee bits and a peanut butter ice cream. 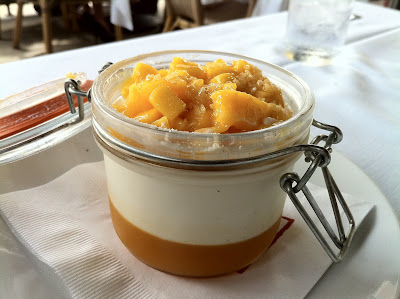 The Vanilla Panna Cotta looked plain compared to the other rich desserts, but it surprised you with crackling pop rocks. The dessert was also not overly saccharine, with most of its sweetness coming from the fresh passion fruit and mango. 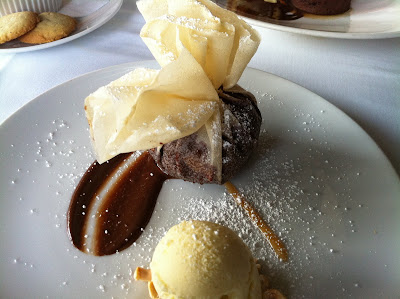 The Chocolate Hazelnut Purse was wrapped up in a pretty phyllo dough package. The wrapper was a bit stiffer than I had anticipated. The chocolate ganache with hazelnut chunks was very dense and heavy. One bite was more than sufficient for me. I believe this was the same dessert that Giada de Laurentiis chose as her favorite dessert on Food Network's Best Thing I Ever Ate. Unfortunately this was probably my least favorite dessert because it was tough to cut through the dense ganache.
Brunch at Fraiche was divine. The food was well balanced and flavorful. The dishes were elegant, yet were still approachable and warm as French comfort food should be. You may think that once the hype dies down or bloggers stop raving about it on twitter, the quality of the food would taper, but Fraiche is still going strong. The food is still very impressive, and when you leave, you'll be planning your next visit.
Hits: bottomless mimosas, polenta, hash, eggplant caviar
Misses: dense hazelnut purse
Rating: ***1/2

that polenta was NUTZ. i couldn't believe how yummy and rich it tasted. yumz.

I was tempted to buy that deal too but it sold out before I could get my hands on it! Love me some bottomless mimosas! Glad someone got to take advantage!

You had dessert for brunch. I don't think the blogger hype has died at all. Give it a year, then they're gonna have to rotate another chef in.

The food at Fraiche was never "bad", even in between Team Travi and the new chef.