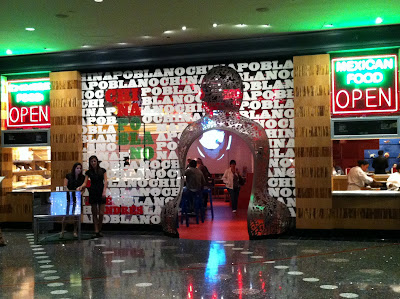 Compared to my last Vegas trip a few months ago where I hit up a couple solid restaurants (China Poblano, Yellowtail at the Bellagio, Julian Serrano), this recent weekend getaway was sadly revolved more around casino hopping and quick bites instead of fine dining. Thankfully I was able to sneak in a dinner at Jose Andres's China Poblano. I don't usually like to do repeat restaurants while traveling but I enjoyed my meal when I had dined there a few months ago. 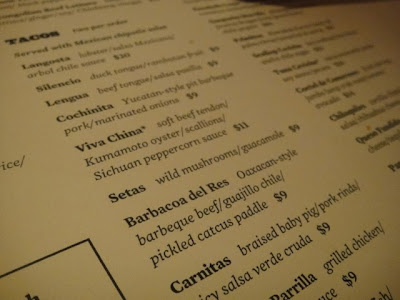 The menu is split between Chinese and Mexican. My favorites last time were the tacos. 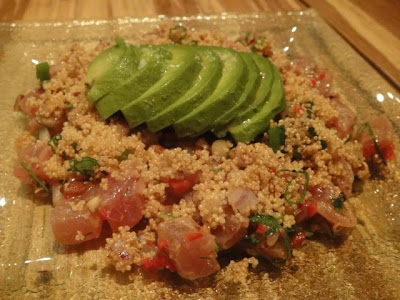 Tuna Ceviche with amaranth seeds, soy sauce and pecans. The amaranth seeds were pretty interesting in texture. They were fibrous and crunchy. The fresh tuna chunks were nicely dressed with citrus and soy. I thought this was a rather unique dish and a refreshing start to the meal. It was also a nice combination of Asian flavors in a Mexican dish. 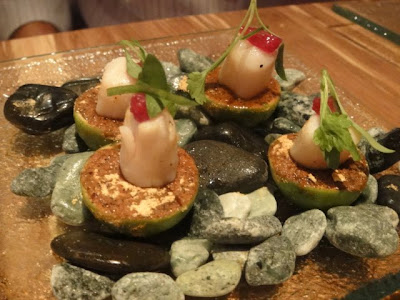 The Scallop Ceviche perched in lime halves, although lovely in presentation, was a bit lacking in seasoning. It did have a sprinkling of ancho chile sugar which added a zing, but I thought it needed some salt. 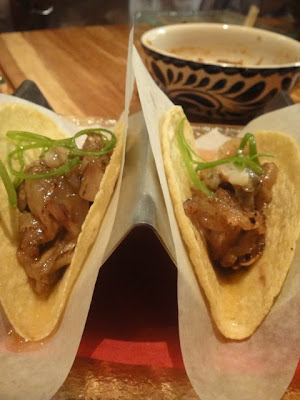 Viva China was a repeat from my last trip. I really enjoyed the soft beef tendon which was buttery and gelatinous. Some might have an issue with the texture, but I loved it. The taco was topped with a Kumamoto oyster. I really liked the oyster addition the previous time that I had this dish, but this time, it didn't sit too well with me. Perhaps I was a bit hungover.. and we know seafood and hangovers don't mix. 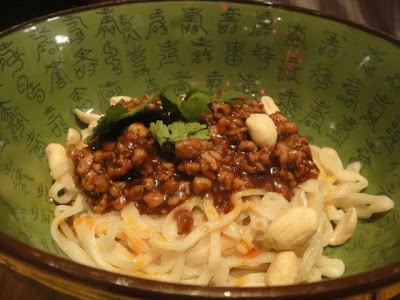 Dan Dan Mian, with hand-cut wheat noodles and a spicy pork sauce, was my favorite among the noodle dishes. I haven't really had much of the real authentic version so I may not be the best judge, but I did like China Poblano's noodles which were soft. The pork was flavorful, and I liked the crunchy peanuts that topped the noodles. 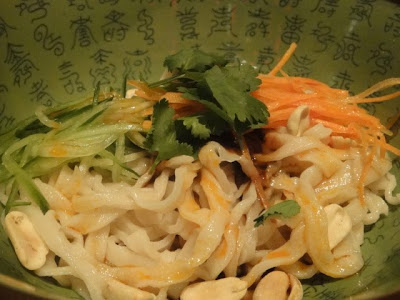 The Open Sesame noodles weren't really anything special. I think it needed more seasoning or punch. And perhaps additional toppings of meat or mushrooms might have made this dish less ordinary. 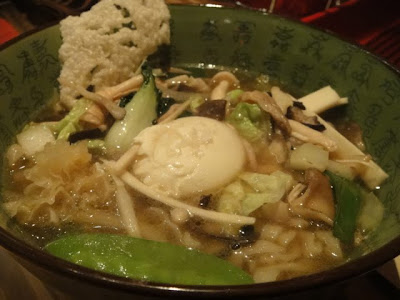 The Unruly Monk was a soup noodle dish with hand-cut noodles, bok choy, wild wood ear mushrooms and a poached egg. It seemed ordinary in flavor initially, but it really got flavorful when we added in the spicy sauce that was served alongside. I think I had a better meal the first time I dined at China Poblano. This is probably because we ordered more of the Asian dishes this time rather than the Mexican dishes. Based on both my meals, I think their Mexican food outshines the Chinese, primarily because there aren't really much twists to the Chinese dishes so you would likely be able to get a better version back in LA. I thought the Mexican tacos and ceviche, on the other hand, were all pretty impressive.
Hits: prices, ceviche, dan dan mien Misses: scallops Rating: ***
China Poblano The Cosmopolitan 3708 Las Vegas Blvd S Las Vegas, NV 89109 (702) 651-2432 http://www.chinapoblano.com/

I'm definitely checking out China Poblano the next time I'm in Vegas! I'll do my best to stick to the Mexican dishes.

going to Vegas next month, will definitely try to hit up!

thanks for the write up :)

Looks like we didn't share any of the same dishes, except the dan dan noodles. I would agree - I probably preferred the Mexican food over the Chinese as well.