Red Medicine: You may love to hate, I just love 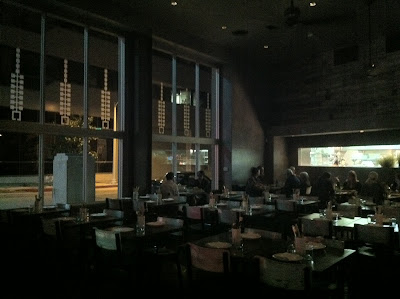 You'll most likely either vehemently love or loathe Red Medicine, even before you've had a chance to taste Chef Jordan Kahn's food. You'll either be disgusted with their outing of LA Times food critic S. Irene Virbila or commend them on their brazen attack. You'll either love Kahn's interpretation of Vietnamese food, or hate that it's pricey and not "authentic". Personally, I was just there for the dining experience, and I left a happy diner. 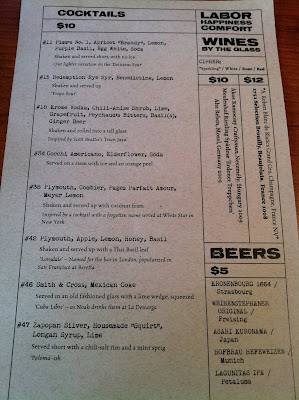 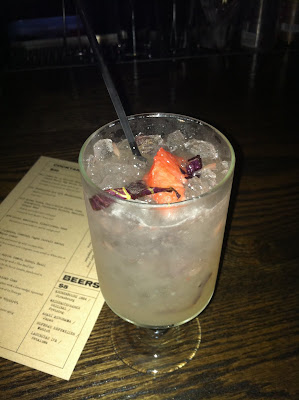 #18 (Krome Vodka, Chili-Anise Shrub, Lime, Grapefruit, Peychaud’s Bitters, Basil, Ginger Beer) was refreshing and so tasty that I finished it in a matter of minutes. 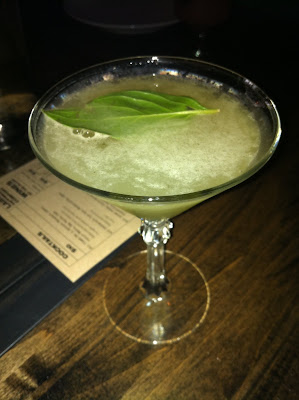 #42 (Plymouth, Apple, Lemon, Honey, Basil, served with a Thai Basil leaf) was aromatic with a nice burst of citrus. They offer a small selection of wine by the glass and beers. 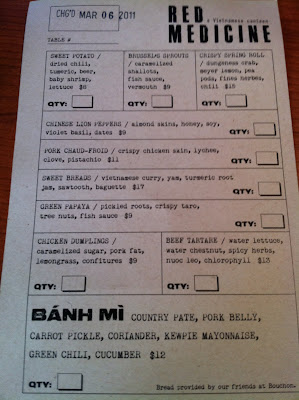 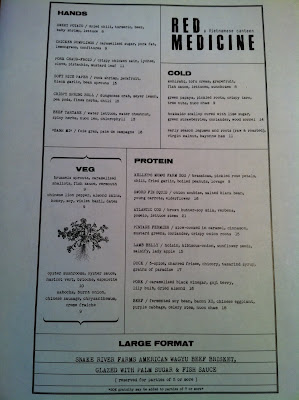 The menu at Red Medicine can be described as upscale Vietnamese inspired. Kahn, who has worked at The French Laundry, Per Se, Alinea and XIV, isn't trying to compete with the authentic Vietnamese dishes that you can find for half the price. He's trying to elevate the dishes while still utilizing key ingredients and incorporating the Vietnamese flavor profile. The dinner menu includes a variety of small plates, cold dishes, vegetables, proteins and large entrees, which are served family style. Our waiter recommended 2-3 dishes per person. 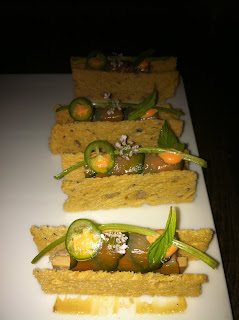 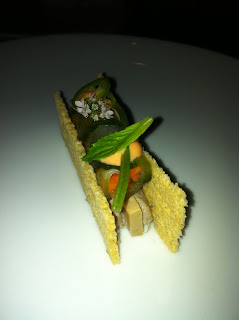 The Banh Mi includes foie gras and pate de campagne. It's delicate and beautifully presented. The rich pate was balanced with a bouquet of Banh Mi pickled vegetables and spicy jalapeno. I liked the small finger-food portion which was packed with the foie taste and sandwiched in thin crackers instead of bread. 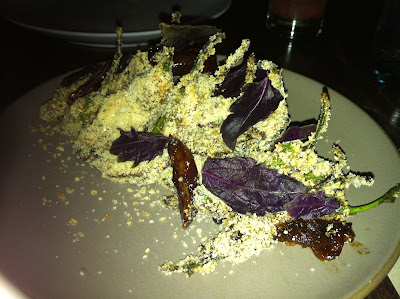 Chinese lion pepper, almond skins, honey, soy, violet basil, dates
This was a very unique preparation of shishito peppers. The peppers were packed with heat, and coated with grainy almond meal and mixed with salty soy sauce. I really enjoyed the rough texture of the breading, and the sweetness from the dates. 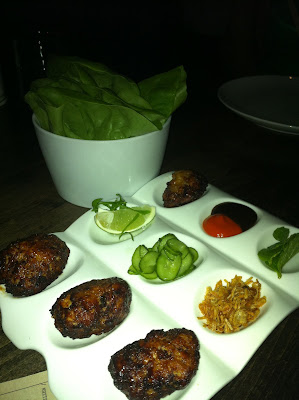 Chicken Dumplings, caramelized sugar, pork fat, lemongrass, confitures
The texture of the dumplings were more like meatballs than dumplings. The dense but juicy dumplings were perfectly flavored with fish sauce and coated with caramelized sugar. You had to assemble the wraps yourself by adding some fried shallots, cucumber, mint, cilantro, sriracha and hoisin sauce to the dumplings and wrapping it all up in fresh lettuce cups. All the flavors worked in harmony. 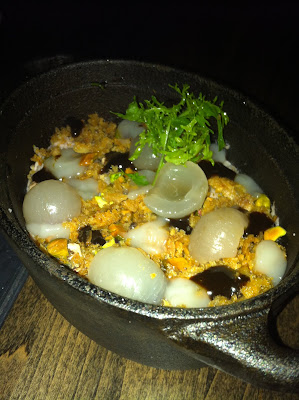 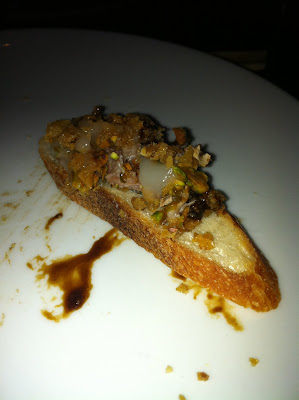 Pork Chaud-Froid is a form of Vietnamese pate which was served cold and with baguette. You would never think to pair pate with lychee but it worked. The crispy chicken skin had an intense rich flavor. I've noticed that the kitchen really loves to play with textures. The chopped pistachio and the chicken skin added crunch to the dish. 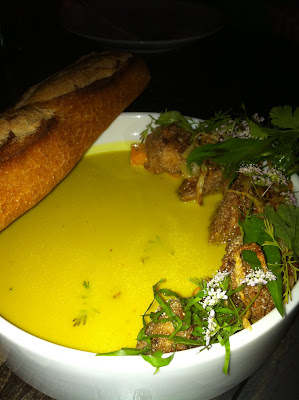 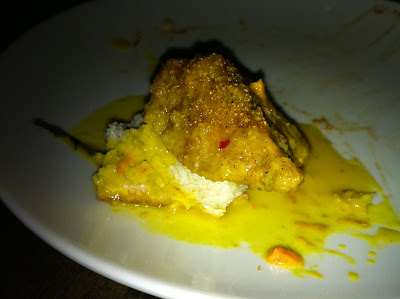 I've never had sweetbreads with curry and I approve of the combination. The sweetbreads were tender and nicely breaded. They had a subtle lemon flavor to it. The curry sauce had a sour tang. You would think that the curry would overpower the sweetbreads but you could still taste the distinct sweetbread flavor. Sweet yams were mixed into the curry which balanced out the tang of the curry. 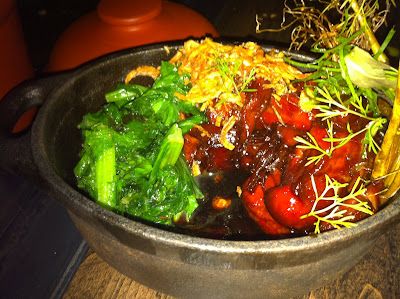 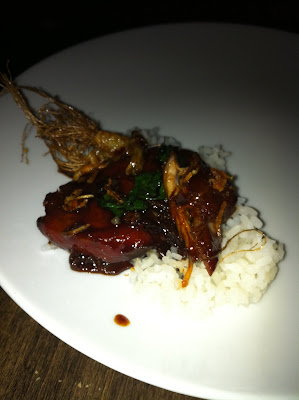 The chicken was slow cooked and tender. I found the caramel sauce to be a bit too sweet for my taste but my dining companions really enjoyed it. I was grateful for the fragrant broken jasmine rice which helped to dissipate the sweetness of the sauce. 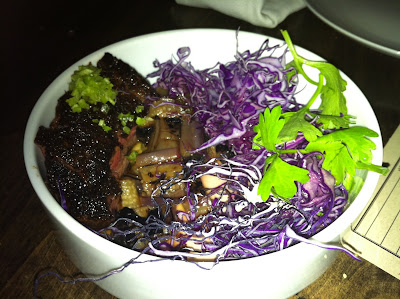 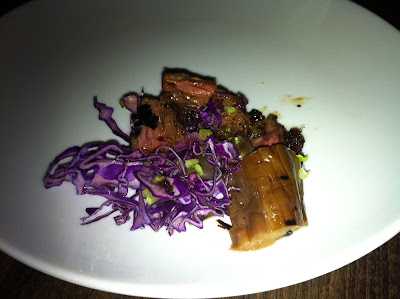 There were some intense salty flavors here which I believe were due to the fermented soy beans and nuoc cham (fish sauce with lime/lemon juice). The fatty pieces of beef reminded me of a cross between filet mignon and pork belly. The eggplant had a smokey flavor which might have been partly due to the bacon XO sauce. I found the dish to be a tad too salty. Perhaps white rice served alongside might have helped balance out the dish. 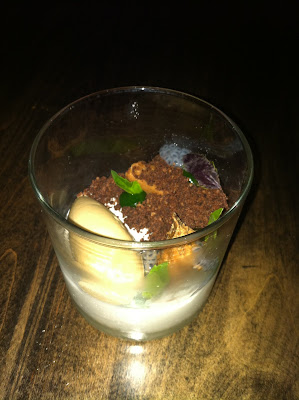 Coconut Bavarois, coffee, condensed milk, thai basil, peanut croquant and chicory
Like all the other dishes we sampled, dessert was an interesting combination of flavors which worked well together. The bavarois had a creamy texture similar to panna cotta. The crunchy peanut butter crumbles tasted like butter fingers. 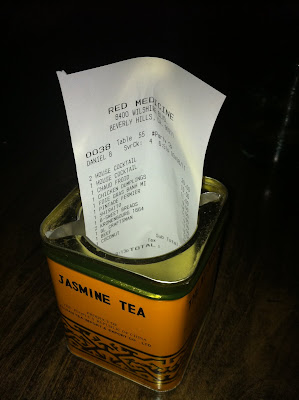 Every dish we ordered was aromatic and flavorful. There was a lot of fish sauce in the dishes but it was balanced with lots of fresh produce. I found the dishes to be intricate and the flavors robust. I thought the small plates excelled over the protein plates, perhaps because the latter were either too sweet or too salty. The menu was interesting and included unique combinations such as lychee and pate, or sweetbreads and curry. Many may complain that Red Medicine can be pricey, but I found it quite reasonable (less than $70 per person including tax, tip and two drinks each). Our waiter was also knowledgeable. Each dish was comprised of many obscure ingredients but he knew exactly what they were and what they lent to the plate. There are many opponents of the restaurant but I am now most definitely a fan.

Interesting. I'd already written it off because I think I'd be in the "too-expensive-inauthentic" camp.

But I ate at Chinois for the first time not long ago and loved it!

I was in the same camp as Weez - thought it was too expensive for my tastes! I think I might want to stick to the bar menu first. Would love to try the banh mi and sweet breads with curry!