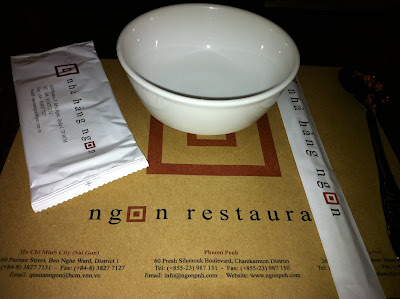 After a couple days of street food in Saigon, we decided to “treat” ourselves to a proper dinner at a restaurant on our last night. Nha Hang Ngon is a popular restaurant is in District 1 (the town center) so it was an easy walk from our hotel. 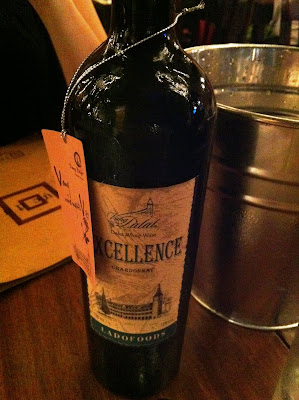 During our stay in Saigon, we realized that wine (regular, not rice wine) was really hard to find. Beer on the other hand, was prevalent and cheap. Thankfully, we were able to order a bottle of white at the restaurant. 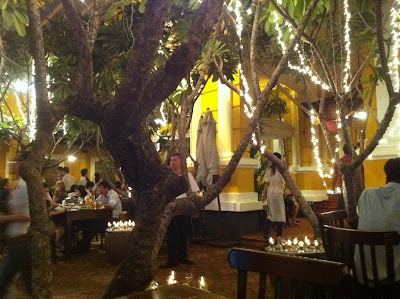 We were seated in the lovely courtyard area right when we first entered through the front doors. It overlooked the street and was a great spot for people watching. The restaurant was busy and bustling.

There are actual hawker-type stalls on the perimeter of the restaurant. I say hawker-type because you don’t walk up and order from the stalls, you order from the waitress when you sit down. The menu is fairly expansive with many pages of Vietnamese dishes. 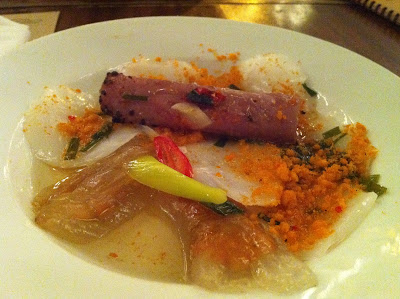 Banh Beo, Bot Loc, Nem Nuong
Banh Meo is steamed rice cakes. The menu described this to be served with dumplings and grilled pork meatball. The dumplings here were actually not what I expected. They were stuffed with shrimp but were kind of flat and gelatinous. It actually tasted really good and wasn’t gummy. The pork meatballs were cylindrical rather than ball shaped. Lots of flavor there. The whole dish was fairly spicy and cooked with lots of fish sauce. 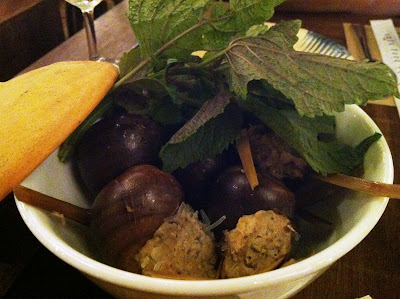 Oc Buou Nhoi Thit, Nam Gung
The snail shells were stuffed with minced pork, snail (which I couldn’t actually tell were in there) and vermicelli noodles, all of which were seasoned with ginger and fish sauce. The meat balls were lean and juicy and had a nice lemongrass flavor. It was quite fun to use a chopstick to get every piece of meat out of the shells. 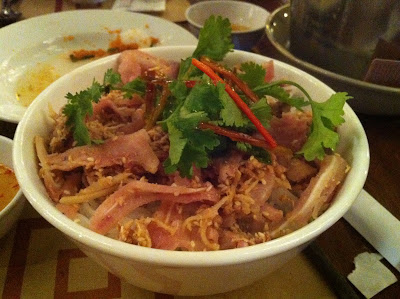 Bun tre
Vermicelli noodles were served with tre which combines pork ear, alpinia (some exotic plant) and garlic. The cartilage was crunchy which made me realize that they must have sourced a lot of pigs because there were a lot of ears.. 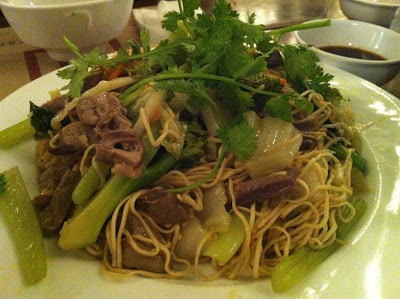 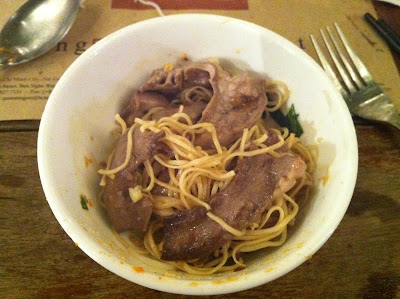 I really loved the offaly flavors, especially the kidneys. The vegetables were actually pretty tasty, similar to Chinese broccoli.

Nha Hang Ngon is a good place to check out if you are fine with a touristy place. It’s great for a nice sit down dinner, if you want something different than sidewalk street food, and if you are looking for a clean place to sit. There are lots of dishes to sample, the portions were fairly large and the prices were pretty decent. Of course the prices can’t compare to the mom and pop shops, but our bill still came out to be US$15 per person including a bottle of wine, which was half the bill.