The thing I was most looking forward to in Bangkok, was the street food. Our goal was to basically graze our way through the city. The street food in Bangkok did not disappoint. It was so good that it made us forget that this was the city where everyone was trying to scam us. 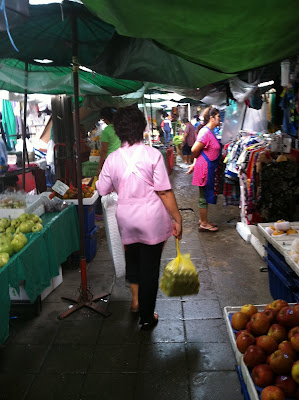 On our first night, we headed to the Kao San area. Sure it may be touristy, but we knew they had lots of street food vendors.

There were vendors serving up grilled meat parts. Lots of offal (gizzards, hearts) but also regular meats (chicken drum sticks and wings). I opted for the drum stick and gizzard skewers. 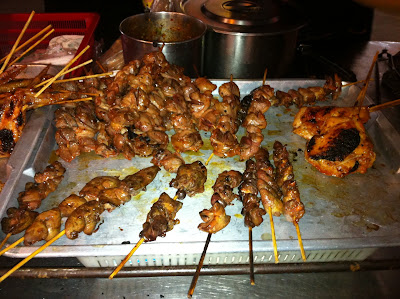 Just to be safe, don’t buy the ones that are sitting by the side of the grill. Have the guy grill you up a fresh batch. That way, you won't leave Southeast Asia with an upset stomach and bad memories. 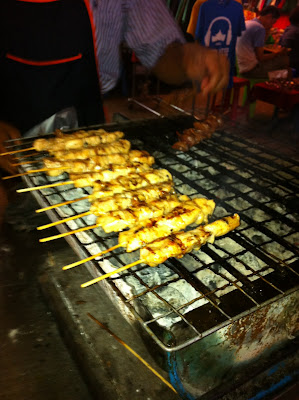 Skewered squid was fun to eat. Very fresh and seasoned with lots of spice. 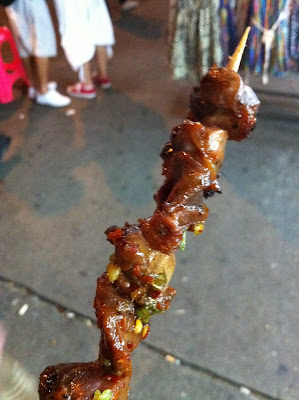 The gizzard was also seasoned with spice and chili. It was chewy, in a good way.

Pad Thai was quite different from the version we get in the States. 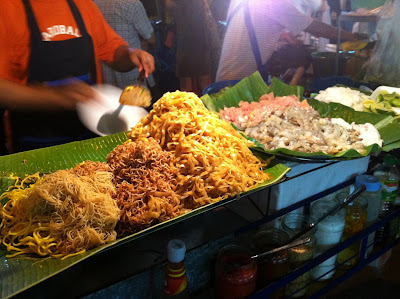 You can choose your type of noodles, which include not only the flat ones that we are used to. Next, you choose your main ingredients, which in my case was seafood. The seafood looked really fresh and included a nice selection of squid and prawns. 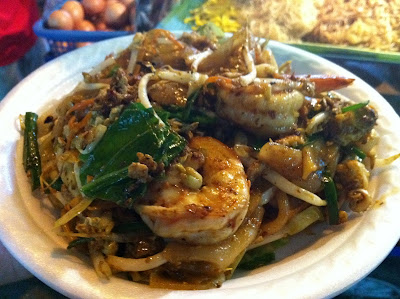 Freshly fried up with lot of spice. It was essentially fried noodles and did not have that peanut sweet taste of Pad Thai that I was accustomed to. I actually really enjoyed the Pad Thai. It tasted fresh, had good flavors and was only 50 baht (US$1.60). 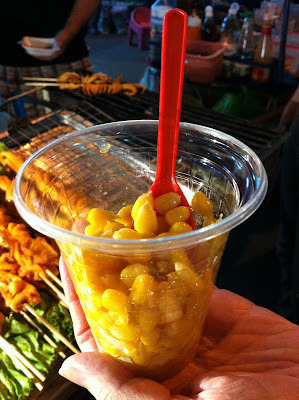 Corn with sugar, condensed milk and salt was only 30baht (less than US$1). It was so delicious but yet so simple to prepare. The creaminess of the condensed milk was similar to that of creamed corn, but the corn here still held its firm texture

Perhaps my favorite street food was something we stumbled upon in Chinatown. We weren't even planning to eat anything because we were on our way to meet friends for dinner. 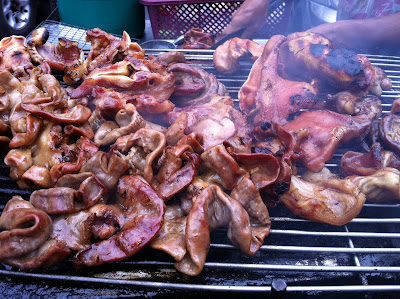 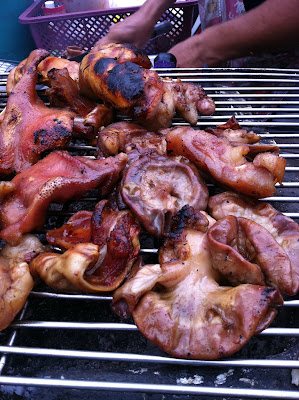 This wasn't even in a street food stall area. There was one sole man grilling up some pig ears and stomach on the side of the street. The portions were huge! He grilled them up, then scissored them up into to edible sizes and doused the pig parts with lots of homemade spicy chili. 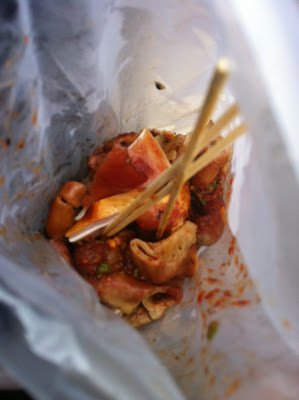 If you like gnawing on cartilage, this is possibly one of the best bites you'll ever come across. The chewy pieces were so much fun to eat, and the chili was the hottest things I had eaten in the city.

The best part of the Bangkok street food that we sampled, was that the portions were small so we were able to eat all day. I really enjoyed the skewers which are a perfect bite size snack after a full day of boozing.