During my trip to Southeast Asia, our goal was to sample as much street food as humanly possible. However, we could not escape our love for a dining experience consisting of tasting menu and wine pairing. Meric is the upscale restaurant located in the gorgeous Hotel de la Laix in the quaint city of Siem Reap. The restaurant is named after the famous Cambodian pepper. It is serves a Khmer tasting menu which I had read over online. 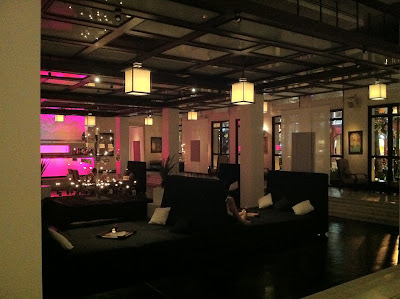 The hotel is so modern and luxurious, that I got pretty jealous when I walked in. This is where I want to stay at next time I am in town! 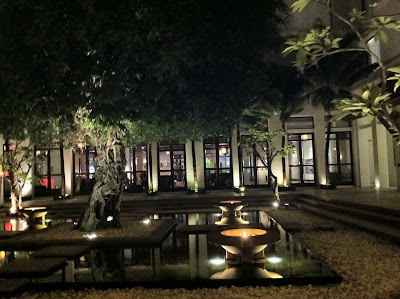 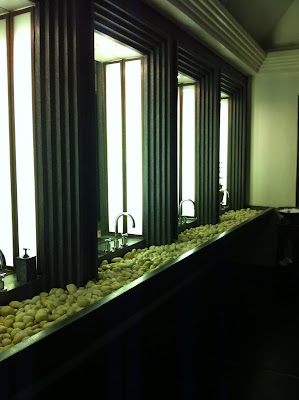 Bathrooms are amazing too. 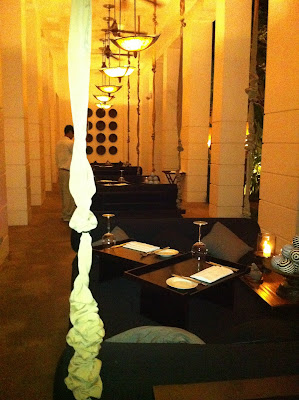 We decided to get seats in the patio area, on their famous "swings". They are essentially chaise sofa looking seats that are suspended from the ceiling. It was fun for a while, but was a task to get on and off. The Khmer tasting is a 7-course menu which features local Khmer cuisine. It was priced at US$33 which is a steal normally, but is considered very pricey by Cambodian standards. Wine pairing which consisted of 3 glasses of wine was an additional US$16. 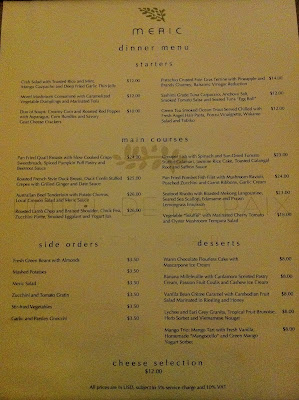 There was also an ala carte menu which encompassed a more Westernized cuisine, offering dishes such as pan fried quail with crispy sweetbreads, and pistachio crusted foie gras terrine. 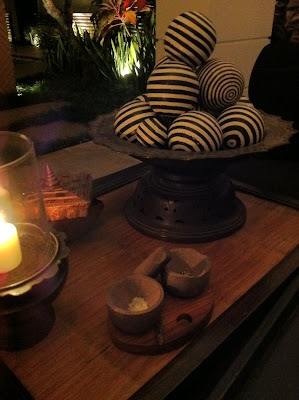 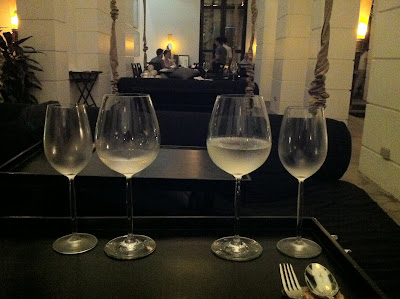 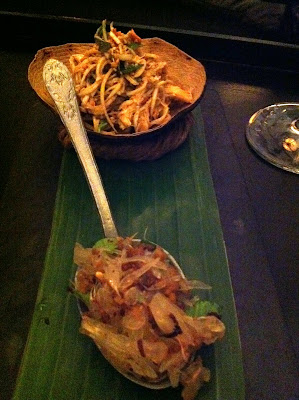 1. Pomolo Salad with Crispy Pork Fritter
2. Chicken and Banana Bud Salad
The first course was essentially the size of an amuse bouche. I liked the texture of the fibrous pomolo salad which was topped with salty and pungent dried shrimp and deep fried pork. Good flavors but it was hard to eat the heap of salad with a spoon and in one bite.

The second course was a salad which was rather refreshingly. The chicken was white meat and a bit dry, but it was seasoned with a lot of fish sauce. The banana and heart of palm were sliced thin and added a crunch to the salad. 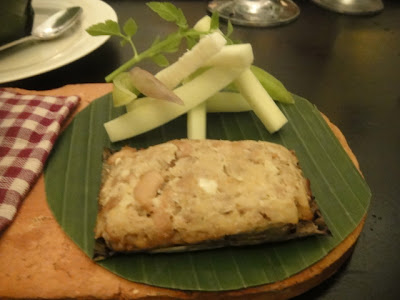 3. Grilled Maam with Khmer Crudites
Maam, which is fermented fish paste cooked in banana leaf, was quite interesting in flavor. It was salty and a bit sour, and I liked its meatiness. The crudite of jicama and cucumber helped to balance out the fishiness of the Maam. 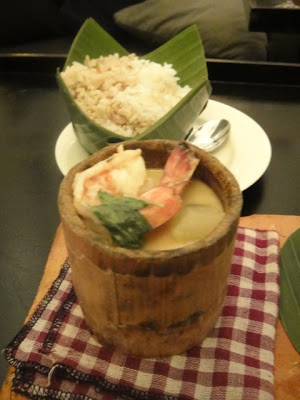 4. Prawn Sour Soup with Coconut Milk and Winter Melon
The curry had a pineapple flavor, and was rather mild and not spicy. I wonder if that is how Khmer curries usually are, or if the kitchen tempers the spice level for tourists. It was tough to eat this dish without a serving bowl. We were told to eat the rice first, then the soup, but the rice wasn't even flavored. Although the curry was lacking in spice, I liked the tang from the pineapples. 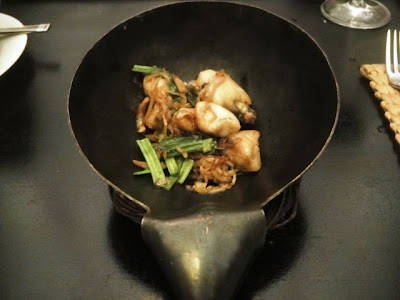 5. Stir Fried Frog Leg with Braised Ginger
The frog naturally tasted like chicken but was a bit dry. I thought the grilled frog from Pub Street that I had the night before was cooked better. There was too much ginger which was rather unbearable - there was a whole clump in my dish whilr my friend had almost none. Must have been a kitchen error. 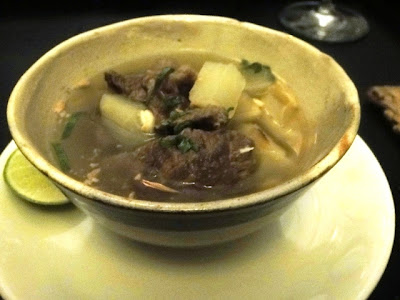 6. Beer Shank Soup with Green Papaya
The soup looked rather ordinary but I really enjoyed it. I liked the semi-soft mild tasting radish and the meat which had a nice amount of tendon, but was still tender. The soup was even better after adding freshly squeezed lime juice, which brought a sharp acidic essence to the dish.

7. Assorted Khmer Sweets
Not sure how I forgot to take a photo of this. The selection included tapioca cake, sticky rice with 3 bean, cloudless green cake, coconut cake, and something similar to bubur cha cha (yam and sago). It was a nice smattering of desserts which were rich and sweet.

Because the courses were served in pairs, it didn't feel like a seven course tasting menu. In fact, we were done after 1.5 hrs. Not necessarily a bad thing, just that I was expecting something more progressive. Overall, it was a good way to sample the local cuisine in a gorgeous environment. It's tough to describe what Khmer cuisine is, I still am not entirely sure. But I do know that it packs flavor, and they do like their frogs here.