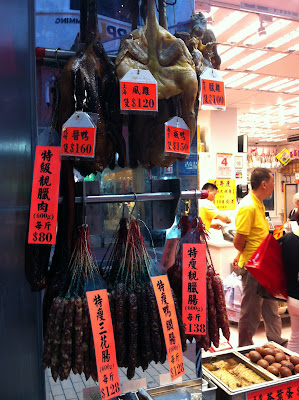 We weren't even planning to visit Hong Kong. After all, our two-week Southeast Asian trip was already packed, with stops in Singapore, Saigon, Siem Reap, Bangkok and Bali. But since our Cathay Pacific flight back to LA had to stop in Hong Kong, we decided to spend a night with the only goal of eating our way through the city. We were staying in Causeway Bay, and it turned out that we didn't even have to leave the area for our culinary tour. 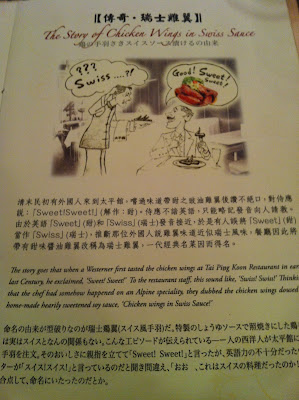 Our first stop was Tai Ping Koon whose chicken wings were recommended by my friend who grew up in Hong Kong. 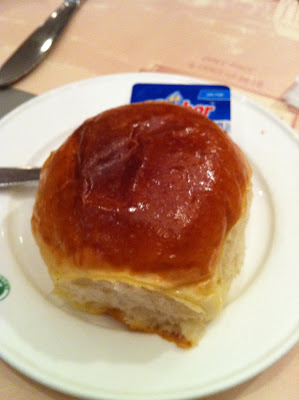 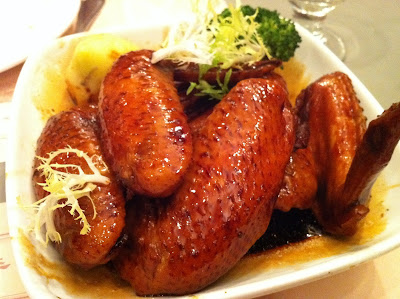 Their famous chicken wings are cooked in a sweet soy sauce. I really enjoyed the wings, the flavors were infused into the meat and skin. Finger lick'in good. I thought it was a bit pricey at US$20 until I realized that I was in Hong Kong, not other parts of Southeast Asia.

Our next stop was for the famous snake soup at Se Wong Yee which came recommended by a local. It was a tiny little cafe with all locals, but they had an English menu available. 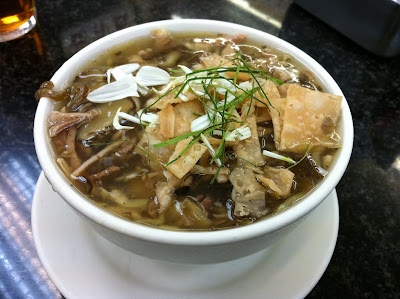 Snake soup is supposed to be good for the health. The soup was a savory broth (the same consistency as soup that has been thickened with corn starch) with chicken, mushrooms, wood ear fungus, lemongrass and thin slices of snake that looked like eel. You probably would not even know it was snake in the soup because it was mixed in with other ingredients. 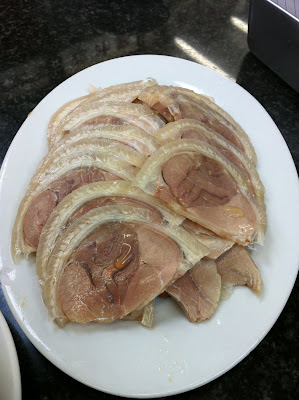 Pig's knuckle was not what I had expected. I was hoping for the stewed pork hock with fatty pieces of pigs feet and lots of skin and bones. This version was like a cold cut. It was still tasty with lots of cartilage, just not what I was hoping for.

After walking off some of our food, we stumbled upon a food stand that was cooking up skewers. 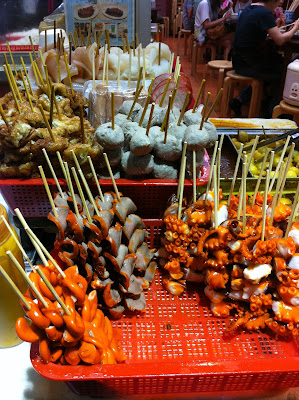 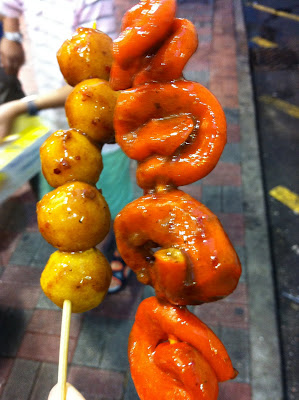 Intestines and fish ball skewers were served with a very spicy sauce that really packed a punch. I love just buying skewers and eating it right on the sidewalk, with the sauce still dripping off the meat. 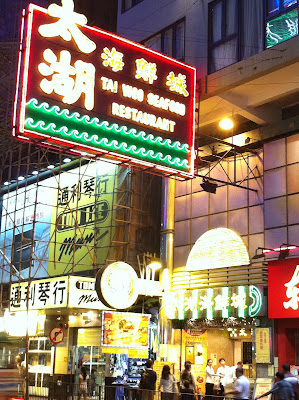 Just down the street was Tai Woo Seafood Restaurant. We were drawn to it because of the fresh seafood in tanks right at the entrance. 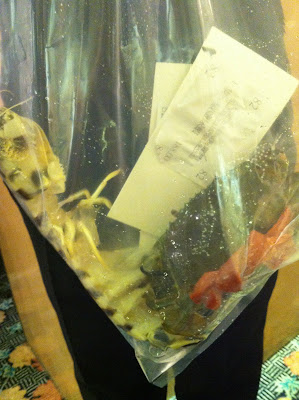 We ordered crab and mantis, which the waiter brought live to our table. The mantis was interesting looking while it was squiggling in the bag. 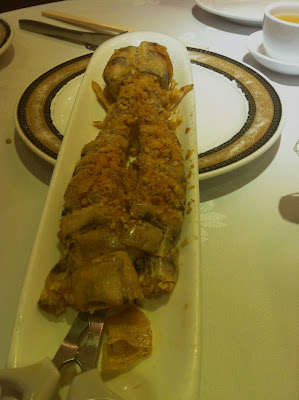 The mantis is like a giant shrimp but the meat was almost similar to lobster. It was topped with some sort of salt and pepper breadcrumbs. 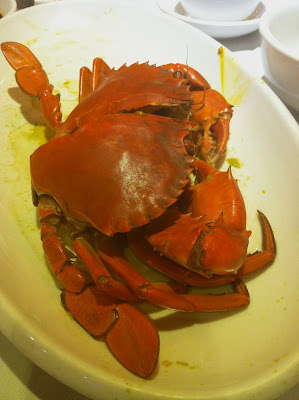 The crab was small and boiled, so it was rather plain. Would have liked some sauce on it, maybe a chili crab style or pepper sauce. 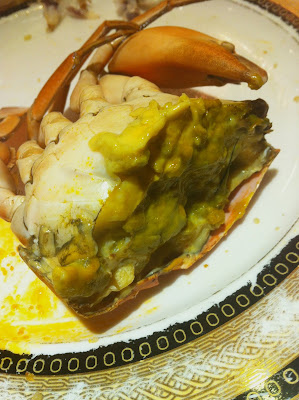 It took a lot of work to eat through it because it wasn't sufficiently cracked, but it did have lots of creamy mustard. Soooo good!

Next we headed to the famous Taiwanese soup dumpling joint, Din Tai Fung. 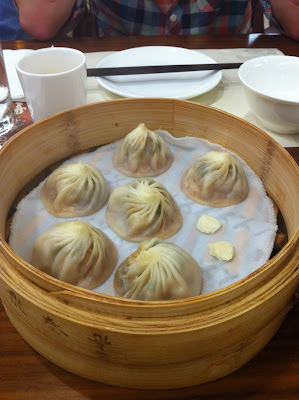 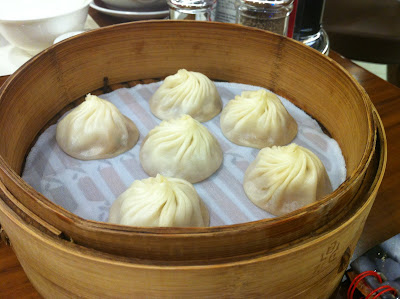 Here, we ordered the truffle and traditional dumplings. Can never get over how delicious these dumplings are. The truffle was a nice fragrant addition to the flavorful soup in the dumpling.

Our last stop was Ho Hung Kee, for wonton noodles. This is the most nondescript Michelin Star place I've ever been. Tiny hole in the wall restaurant that still had squatting toilets! And the food here is cheap. 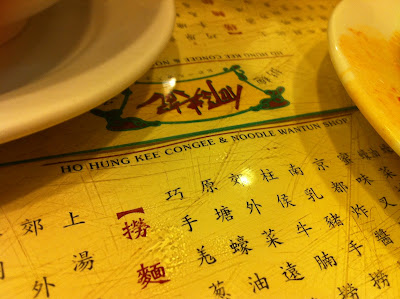 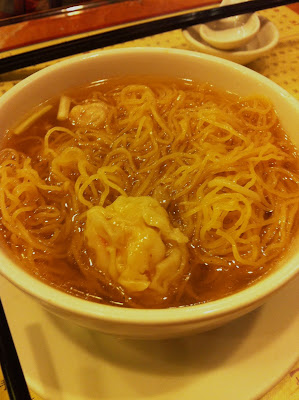 A tiny bowl of noodle soup was topped with wonton. I liked the noodles and the flavorful broth. The wonton was plump and filled with shrimp and pork. 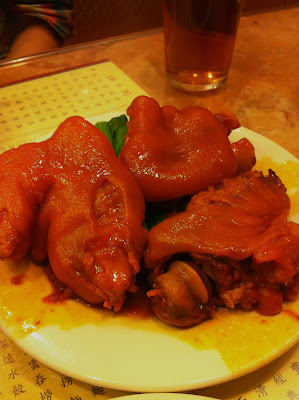 The pigs feet was exactly what I had been searching for. It was fatty and glutenous. I really enjoyed eating the skin and biting every piece of fat and meat off the many bones on the trotter. Lots of good salty flavoring too.

We managed to do quite a lot of damage in an afternoon. I don't think we needed more than a day in Hong Kong. If you do it right, you can eat through the city in just one night.