Bongo Room in Wicker Park is a very popular and beloved brunch place in Chicago since opening almost two decades ago. When my friend mentioned that we would have to get there before it opened at 9am on a Saturday, I was deterred a bit. I hate waiting in lines. Thankfully, we managed to get up and out the door in time, and when we arrived at 8.45am, a line was quickly forming. You could tell that they were all locals from the neighborhood in line. That's a good sign.

When the door finally opened at 9am (not a minute earlier), we were seated in a cheerful dining room with Tiffany blue walls and moose heads (not real) mounted on the wall. 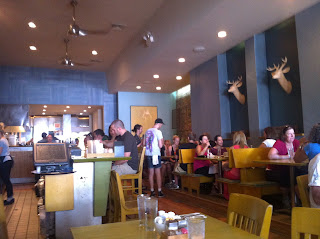 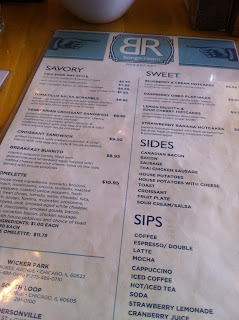 The menu comprises of typical brunch fare such as eggs, pancakes and croissant sandwich. They also have a Specials menu that changes seasonally. I do like that they have some interesting dishes such as red velvet hotcakes and vanilla bean brioche french toast 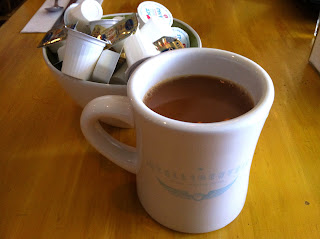 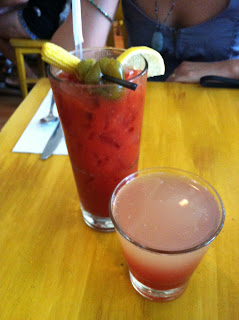 Bloody Mary and Black Raspberry and Grapefruit Mimosa. The mimosas weren't cheap at over $8 a piece (ouch) but I did like some of the flavors such as Orange Mango and Raspberry and Pear. 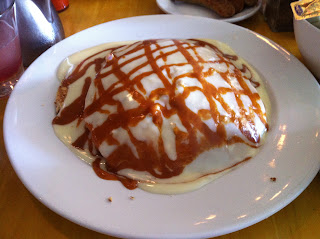 White chocolate and caramel pretzel pancakes was on the Specials menu so I had to try it. When it came out, I was a bit nervous. It looked uber sweet but thankfully, the caramel and white chocolate sauce was milder than one would expect. The sauce was outstanding - the right amount of creaminess and milkiness. They also did a great job of balancing the flavors with the saltiness from the crunchy crushed pretzels that were embedded in the fluffy pancakes. It was like a little surprise in every bite. The portions are quite large, with three pancakes in each plate. I don't normally order sweet pancakes but was very very glad that I did. A+! 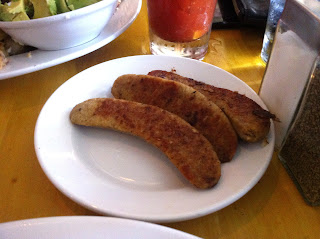 We ordered a side of Thai chicken sausage with ginger which I was hoping would taste like Issan sausage. Not so much. It was a bit dry, and did not have the strong, sour and fragrant Thai flavors that I was hoping for. Definitely more American in flavor than Asian. 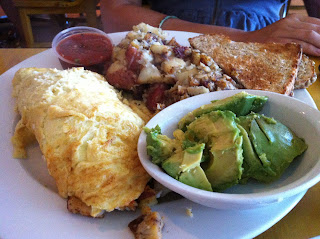 Chorizo, potato and avocado omelet was also very tasty. Large portions here as well, with a hearty omelet with spicy and intense chorizo crumbles. The side of potatoes were nicely seasoned.

I can see why Chicagoans flock over to The Bongo Room. I think the sweet dishes are more unique than the savory ones. I really enjoyed the delicious white chocolate and caramel pretzel pancake, although I am not sure if I would be willing to wait in line for it.