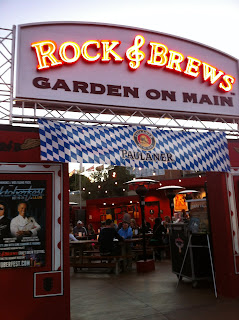 El Segundo is really quite an underrated area. I especially like Main Street, which is a cute little downtown area that has quite a number of bars walking distance from each other (Main Street Tavern, Rock & Brews, Richmond Br & Grill, Second City), in fact, we did a bar crawl in Main Street one night and had a blast. Main Street is also a great place to stop by before/after you pick someone up from the airport - it's actually our airport routine. Since it was October, we decided to hit up our old favorite Rock & Brews for a drink when I flew into LAX.

Through October 28, Rock & Brews is hosting their Oktoberfest from Thursdays to Sundays. They have German beers in addition to their extensive craft beer list. 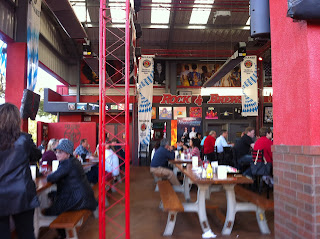 The place was renovated about 6 months ago, now with a more open concept with an open air beer garden. Owned by Gene Simmons (from Kiss) and Southbay restauranteur Michael Zislis (Rock n Fish, Shade), the bar definitely has a rock and roll theme- rock videos on the TVs, band posters on the wall and rock music playing in the background. It's not overly gimicky though. 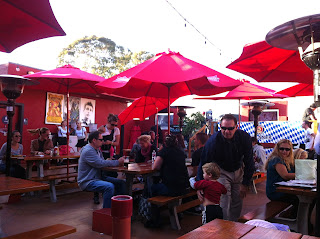 They have a  nice outdoor space, with a stage where contests are held later in the evening such as the beer stein drinking and stein holding competitions, they will also have you do the chicken dance. 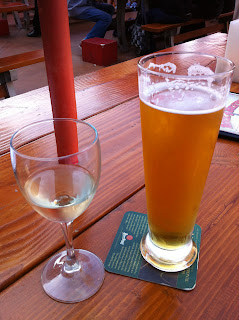 Rock & Brews has a decent selection of draft craft beers (~30) and lots more in bottle. They were serving beers in a big steins but we had to drive home so we decided to go with a regular glass of Mama's Lil Yella Pilsner and a glass of vino. 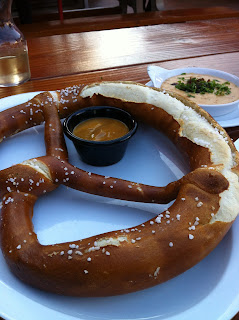 I love pretzels and am always on the search for the best one - having had my fair share around town, I can honestly say that this is consistently the best pretzel I've had, Some places (like Bru Haus in Brentwood, farmers market) are inconsistent (soft sometimes, but doughy on other occasions). Even Rockenwager's pretzel are sitting in the bakery case and not fresh out of the oven. Rock & Brews has always been fresh and soft. Also, I love when pretzels are served with cheese, in addition to spicy mustard. Bru Haus has a cheese dipping sauce but it is loaded with peppers that give it an overbearing tangy taste that I do not like. I really liked Rock & Brews Beach House Amber biercheese sauce. They used to melt cheddar on top of their pretzel which was fine but a bit messy, but I much prefer the biercheese dipping sauce. It was slightly sweet with a somewhat chalky consistency, and was topped with caramelized onions which added a nice sweetness to the sauce. The Bavarian pretzel was also fresh & soft (as usual), piping hot from the oven.

They currently offer more German beer fare as part of Oktoberfest such as schnitzel and sausage samplers. Unfortunately we were craving their regular fare. 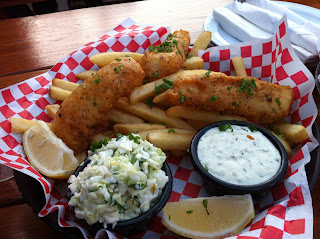 Fish & chips, unfortunately was actually not that impressive. Guess we should not have ordered fish at a burger/brat restaurant. Somehow, the fish tasted rather bland. I would have liked for the Bass Ale batter to be flakier or crunchier. 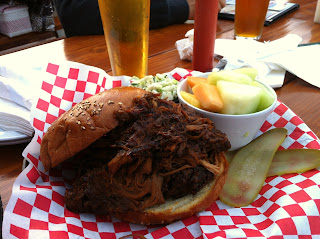 Thankfully, the slow roasted pulled pork sandwich delivered. I loved the smokey bbq which had a spicy kick to it. There was a lots of pulled pork in the sandwich and the meat was tender. Although I didn't notice at the time, the meat was actually rather salty as I was left parched for the rest of the night. I did enjoy the fresh bun which was lightly toasted with some oil. The spicy BBQ sauce was smattered all over the bun. So delicious.

Rock & Brews is really a fun place to grab a drink, a bite and enjoy the California sun. Love the casual vibe and the fun atmosphere. Definitely get the Bavarian pretzel when you are there, and if you stick with the sandwiches, burgers and pizza, you will be happy.