The Pikey: Not your everyday English pub in Hollywood.

The Pikey is the English pub that opened up some 4 months ago, located on Sunset Blvd in Hollywood, although surprisingly not really near anything else. In fact, it is located on a street with little foot traffic. However, despite its location, the pub has been garnering some great reviews around town. The pub has been transformed from its prior self Ye Coach & Horses. There are two sections - on one side, brightly lit with restaurant seating, on the other side, a dimly lit bar with red booths. I took my out-of-towners to the bar section. It was a Friday late afternoon and was fairly empty, but apparently this place ramps up on the weekends. Owner Sean MacPherson (who has his hands in numerous Hollywood bars such as Jones, Swingers, El Carmen, Bar Lubtisch) came by a couple times to check up on us. 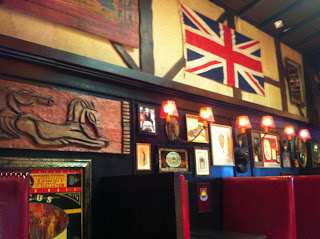 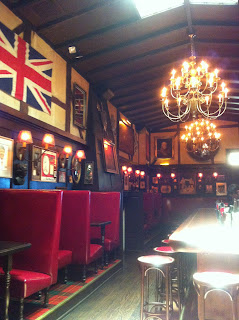 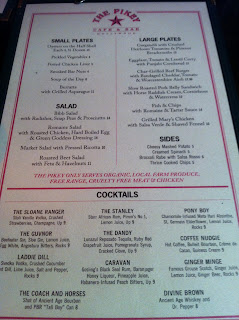 The Pikey is touted as a gastopub, aka elevated bar food. The menu is really not what you would expect from an English pub. Yes there is the fish & chips and lentil curry, but that is the only dish synonymous with a pub. Instead, there are various salad dishes, and entrees such as a pork belly sandwich and a grilled chicken dish. 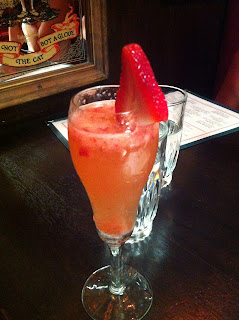 The Sloan Ranger (Vanilla Vodka, crushed strawberries, champagne) was refreshing and extremely drinkable. The Stoli vanilla was rather sweet but the champagne helped to temper the sweetness. I liked the fizz from the bubbly. 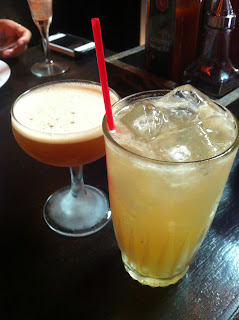 Ginger Minge was a variation of a moscow mule with ginger beer, lemon juice and scotch.
Caravan with a cocktail made with rum, Baronjager honey liquer, pineapple juice, habanero infused peach bitters. It is not for the faint of heart- not only was the drink strong, but the habanero packed a punch.
The drinks were tasty, presentation lacking a bit though. 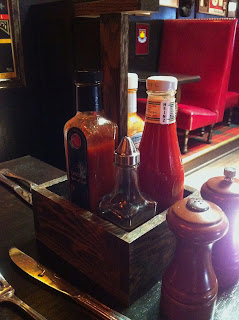 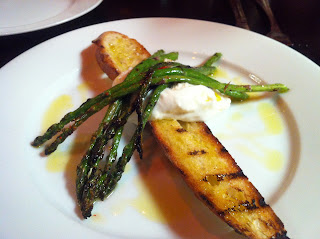 Burrata with grilled asparagus was a great starter. Very clean and fresh flavors. The burrata was creamy with a tinge of lemony flavor. It's simple yet kept us wanting more. 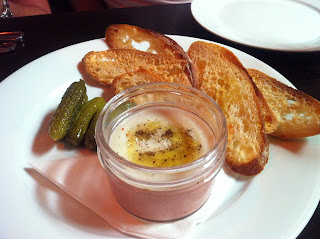 Potted chicken liver was a hit with the table. The liver was on the creamy side with a tinge of sweetness, and very spreadable over the toasted crostinis. Not too intense in the liver flavor. 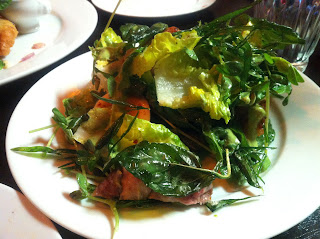 Romaine Salad with Roasted Chicken, Soft Cooked Egg and Green Goddess Dressing was an interesting dish. Much larger than the salad portion we expected. I've never had green goddess dressing before and quite liked it. It had a citrus tang to it with anchovies and tarragon essence. The romaine had various textures, some of the leaves were deep fried and crisp. The chicken was tender with a lemon taste. 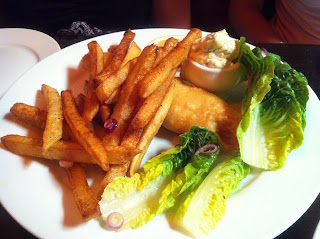 Fish and chips ~ I am a big fish & chips fan. The fish here was fresh and the batter was nicely seasoned. I appreciated that the batter wasn't greasy and the coating was crunchy and held its texture after being doused with malt vinegar.  The side of romaine leaves were not an oversight, they were appropriately dressed - which is very important thing although many restaurants forget to do so. The fish & chips here is simple - it is not a variation of the real thing, and does not stray from how its prepared traditionally. 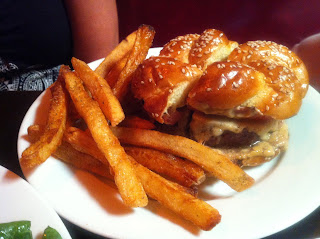 Char-Grilled Beef Burger with Bandaged Cheddar, Tomato and Worcestershire Aioli ~ Really enjoyed the patty, cooked medium rare, that was very juicy and tasted extremely fresh - you could tell that it was a good mixture of meat that they used. Coupled with a tangy aioli and brioche bun that was fresh and soft, the burger was quite delicious. I wouldn't go so far as to say it's one of the top in the city, but it was definitely tasty.

I think those searching for a real English pub may be disappointed with The Pikey - you won't find the heart-stopping shepherd's pie or pies here. But you will find some good food here - well prepared, fresh ingredients, clean flavors.