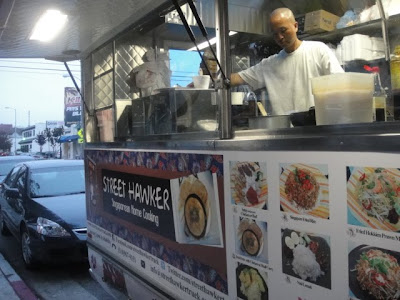 I only know of two places near the Westside that serve Singaporean food - Banana Leaf and Singapore Express. I know a lot of Singaporeans/Malaysians/Indonesians may claim that the food isn't completely authentic but in all honesty, short of making the 16 hour flight east, I'm grateful that there are places to go to if I'm have a craving. Just recently, a Singaporean food truck opened up. I typically don't like chasing trucks (I hate lines or waiting around for a tweet of the next location) but I decided to make an exception for Street Hawker Truck because I'm Singaporean and I gotta support my peeps. And also because my mom is busy traveling with my dad, I haven't gotten my Singaporean fix in a while.

Hawker centers are widely present in Singapore. They are open air venues that house food stands, where each stand typically specializes in 1-2 dishes. The dishes are cooked pretty quickly and are usually priced cheaply. The Street Hawker Truck offers up a nice variety of dishes. I couldn't just pick one so I ordered three dishes. In my defense, I actually ended up sampling them all and have more than half leftover. 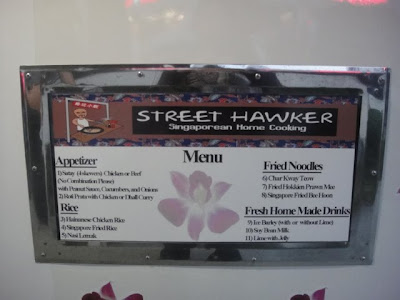 The side of the truck lists the menu (with photos, which is a plus for people that aren't familiar with the cuisine) however prices are not listed. There were two people in the truck last night, parked on Sawtelle in West LA. I do have to comment that they were not the friendliest bunch. I stood at the front of the line and they saw me but continued cooking and didn't even acknowledge me or look over to say "sorry, it'd be a while". It's plexiglass all around the truck so I know you can see me! Finally after 5 minutes, the owner came over and took my order. I also noticed other people after me waiting at the front counter, confused as to why no one was addressing them. Definitely missing the hospitality of the Kogi's and Nom Nom's of the world.

The food is cooked to order so takes a while. In fact, it took 30 minutes for my food from the time I ordered (and there was only one order in front of me...). I did like that the lady cook tasted the food before serving. Don't worry, there was no double dipping. 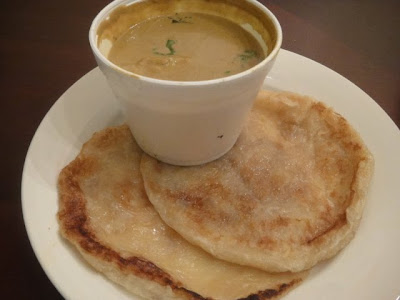 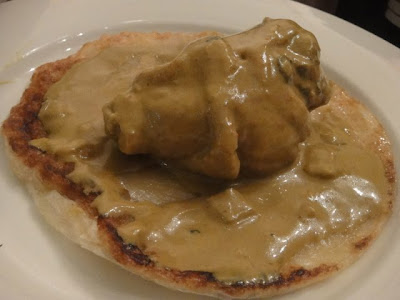 Roti is a thin fried dough pancake. It had a nice thin crisp exterior but probably could have been a bit crisper (but that's just a minor critique). It was also a bit greasy. The chicken curry was delicious and IMO, pretty authentic. The flavors were really good and it wasn't neither too runny nor too thick. I'm also glad they didn't skimp on the spice. There was a large piece of chicken drumstick in the curry that fell off the bone. This was definitely my favorite dish. 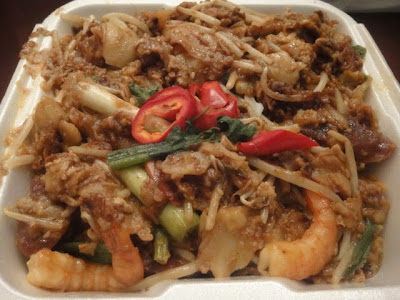 Char Kway Teow
Char kway teow is a fried noodle dish. Traditionally, it's fried with lard but I'm glad the truck uses broth and vegetable oil instead. There was a nice amount of chinese sausage, perfectly cooked shrimp and fish cake in the dish. The only thing missing were cockles which BTW really makes the dish. But I understand that it's missing - cockles aren't that common around here. Unfortunately, the noodles were horrible. They were clumpy and wet (either from the broth or oil that wasn't cooked out). It reminded me of a mushy radish cake. I thought it also lacked the distinct flavors of an authentic char kway teow. It seemed they did not use enough dark sweet soy sauce. As such, I thought the flavors weren't bold enough. 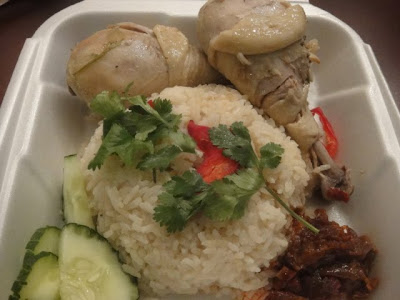 Hainanese Chicken rice
This is a signature Singapore dish and I thought Street Hawker Truck did a good job at it. The most important part of the dish is the rice. It has to be fragrant and cooked with chicken stock. The truck's version was flavorful enough to be eaten alone, even sans sauce, but it was lacking a bit of oiliness that usually comes with the dish. The chicken was cooked the proper way, with a slight pinkness in the center. It's not the best chicken rice I've had but it definitely hit the spot. I really enjoyed the sambal chili which was spicy. The dish was missing dark soy sauce but thankfully, I had some at home. It really is the perfect combination of condiments - chili sauce, dark soy sauce and a side of cucumbers.

I liked that the Street Hawker Truck is introducing Singaporean cuisine all over town. However I think it's more in line with the food stands at the Original Farmers Market on Fairfax as opposed to a food truck. For example, the prices are much higher than that of food trucks but the portions are large as well. Additionally, you'd really need a knife and fork for some of the dishes, so it's not easy to perch on the sidewalk to eat. Lastly, a 30 minute cook time is not the most convenient for foodtruck chasers. I liked the menu items and although the kway teow was a miss, I really enjoyed the roti prata and chicken rice. I would definitely head back to try the satay and nasi lemak. I hope they'll survive in this economic climate but I do have to say that they might have to improve on their service and marketing. Their website needs to be updated with a menu, schedule and a Twitter feed. They should also add another person in the truck to take orders/handle packaging while the other two cook. And please, smile a bit and don't ignore your customers. Customer service might not be important in Singapore where the service industry doesn't benefit from tips, but it's important here in LA (I saw a couple walk away after waiting 10 minutes and no one acknowledged them). Yes there are kinks with every new business but I think if these are addressed, Street Hawker could really be that standout truck.

I really like the concept of the Street Hawker truck! Singaporean eats on LA's streets. I hope the execution and customer service improves with time. I'd like this one to stick around.

Wow! I've never had Singaporean cuisine before and always heard about the Banana Leaf. I think there is a place in Portland.. I will inspect those cockles for you and report back.

Gastronomer - yeah its still better than nothing, i suppose. I'll hit it up again in a week or 2 and see if it got better.

Anna - oooh yeah, you gotta check it out. If you like spice, you'll love it

So creative...Check out this food review contest to win a hotel stay in Singapore!