Susan Feniger gives us a little taste of Street food 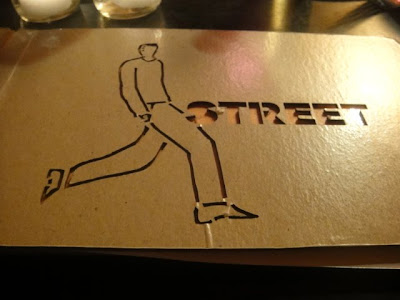 Growing up in Singapore, I've been exposed to really good, authentic, cheap street food. As such, the bar is set pretty high for that type of fare. When Susan Feniger (Border Grill, Ciudad) first opened up Street, a restaurant that focuses on global street food cuisine, the whole town was intrigued. This was even before the food truck rage that brought us quick (and often ethnic) bites. It's a great concept really. Who doesn't like exotic dishes? Who doesn't like a bit of spice? Who doesn't like small-plate menus that allow you to sample a bunch of different dishes. Unfortunately when I first visited Street when it had just opened, I was underwhelmed. The massaman curry was missing a punch and the stir fried noodles were doughy. Feniger also faced a lot of backlash online for her $16 bowl of pho (it's no longer on the menu).

But when BBE offered a 30% discount, I decided that it would be a good enough reason to return. You really can't say no to such a deal. Street also has a happy hour M-F 5-7pm with discounts on drinks and select appetizers. 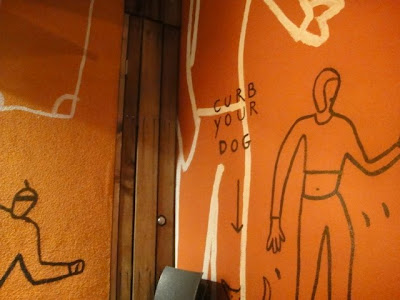 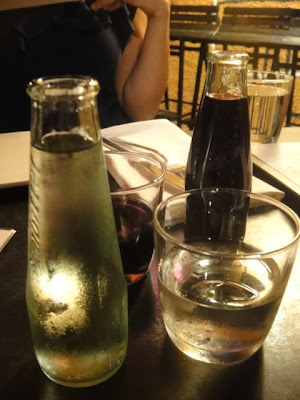 I like the little carafes that the wine is served in. 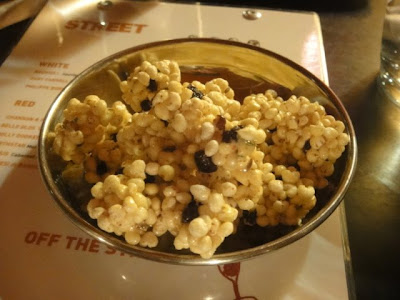 Complimentary dish to start: Millet seed puffs with marshmallow, fennel, curry, coriander, cumin and black currants
They were airy, puffy and had a nice savory and sweet taste. A nice pre-meal snack in place of bread. 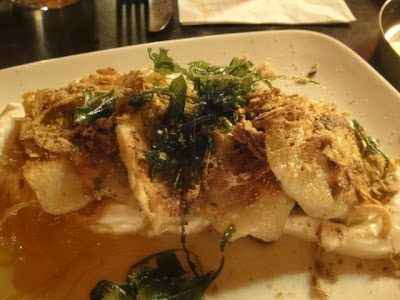 Spinach Varenyky small Ukrainian dumplings filled with spinach and a light layer of salted cheese; boiled and then pan fried
I didn't love this dish. I thought the dumplings were bland. I did appreciate the texture of the fried onions and the sweet lemon marmalade that was served alongside the dumplings. 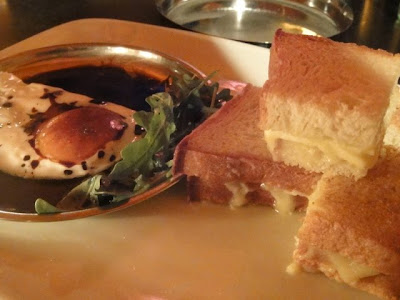 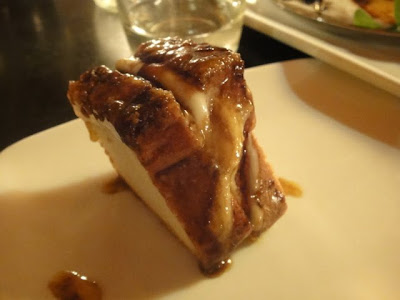 This is probably Street's most popular dish. I loved the coconut flavor of the kaya. I've never had kaya toast with an egg before so I thought that was a nice pairing - the sharp soy sauce with the creamy sweet jam. I know.. critics will say that you can guy kaya at 99 Ranch Market for a couple bucks and make this dish at home, instead of paying $11 at the restaurant. True. But I still really enjoyed the dish. 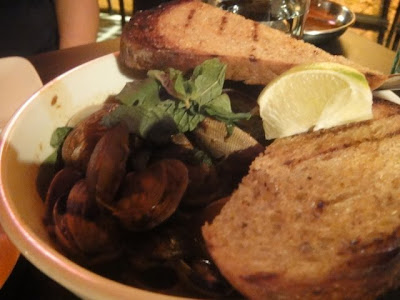 Malaysian black pepper clams - simmered in oyster sauce with cracked black pepper, palm sugar, soy, and lime
The clams were cooked well and there was a generous portion of them. The black pepper sauce was a marriage of many flavors including salty, sweet and citrus. It also had a bit of kick from the pepper. I only wished they offered more bread was there was a disproportionately large amount of sauce. 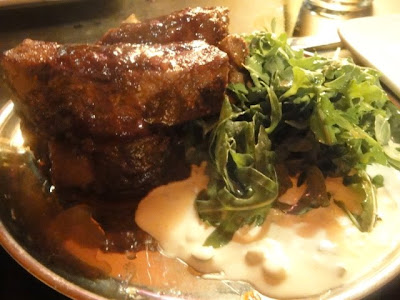 Baby back ribs in spicy Korean miso glaze with scallion ginger cream
The ribs were really tender and very meaty. I also liked the cream sauce which had a tartness that cut the heaviness of the meat. 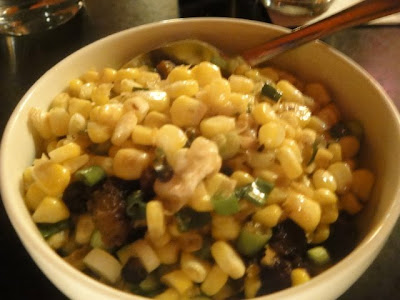 Vietnamese corn with 5-spice pork belly, hot chile pepper and scallions
This was absolutely delicious. You know, the type of dish that you keep spooning and wanting to drink every last drop of sauce. The corn was sweet and mixed with the saltiness of the pork belly and fish sauce. The pork belly was fried crisp so it added a crunch. This really seems like a simple dish but bursting with flavors. 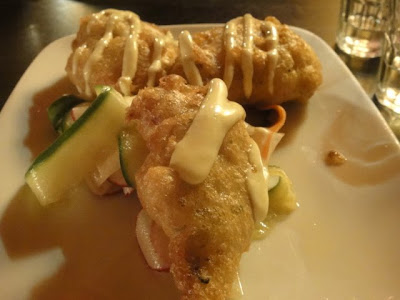 Tatsutage fried chicken marinated with soy, mirin and sake, crispy fried in rice batter and topped with spicy kewpie mayonnaise sauce
Our waitress really pushed for the dish. We were apprehensive because we knew we could get better and cheaper karage at any izakaya. We probably should have listened to our gut instinct. This wasn't bad, but it wasn't anything special. The chicken was served in large pieces, I wished they were tiny bite sized pieces. But the chicken was surprisingly tender for such a big piece. I also prefer the traditional karage batter (flour or potato starch) as it would result in a crispier batter. And at $15, this didn't seem worth it. 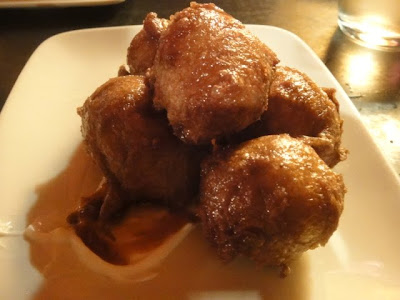 Turkish donuts - small spiced pastries fried and then simmered in cardamom rose syrup served with sour cream and rose hip jam
The donuts were tasty, airy and relatively light. I liked the combination of sour cream and sweet syrup. 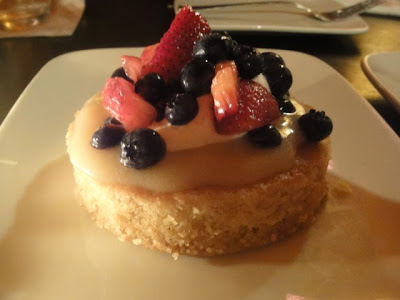 Egyptian Basbousa cake with lime curd, whipped cream and fresh berries
I don't usually like key lime pies so I wasn't too thrilled about this dessert, but the lime flavoring was subtle. The cake was soft and similar to angel food cake. Once again our waitress raved about this, but I didn't think it was any better or different from the type of fruit tart you could get at a bakery.

I'm actually glad I gave Street another chance. It's rare to be able to sample multiple cuisines in one seating. I thought the menu was a nice representation of the various cuisines and the dishes were rather unique. They weren't things you could easily find at most restaurants. I especially enjoyed the short ribs, corn and kaya toast. The dessert were good but nothing mind blowing. The prices are definitely not "streetfood" prices but with BBE's 30% discount, it's getting there.

Hey Steph, can you shoot me an email? kevin|@|kevineats.com

That corn was definitely my favorite dish when I went to Street too! Could eat a bucket of the stuff! Behold the power of pork... ;)

Diana - yess it was soo good but i think should be easy to make too! Need to find a recipe

Anna - you should check it out. I thought the menu was interesting.. different