Scoops Westside: where I polished off a pint all by myself in 2 days. It's that good!

I'm not even really an ice cream kind of person. You'll rarely see a tub in my freezer. But I've heard so much about Scoops at Heliotrope for a while now. Owner Tai Kim is known for experimenting and introducing unique ice cream flavor combinations such as pandan, foie, truffle, saffon, wasabi among others. I really wanted to try it but I rarely leave my westside bubble. (BTW I just googled Heliotrope. Somehow I always thought it was somewhere far east, like Eaglerock or Glendale. Turns out, it's a mile from my work in hollywood. I'm a dork!). When they started to offer Scoops at The Golden State, this was my chance to try the popular brown bread ice cream. But parking on Fairfax is a bitch and they don't have valet, so I never motivated. About a month ago, Scoops opened up an outpost in the Westside, brought to you by food blogger Matt Kang of mattatouille. With a parking lot and ample street parking, and located within a 10 minute drive from my home, I had no excuse not to check out the ice cream shop.

When I visited the shop over the holidays, it was rather bare bones with just a couple chairs and tables, and the ice cream display separating you from Kang who eagerly tries to offer you samples. I like that he opened the shop even before finalizing paint colors. It's an ice cream shop. He's trying to sell you on his selection of delectable ice cream, not try to win you over with over-the-top ambiance. 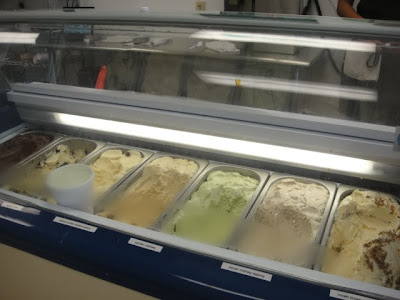 There were seven flavors available which Matt decides on the night before and picks them up from Kim in the morning. The flavors change almost daily. Scoops Westside also offers the ever popular Intelligentsia coffee. Matt also talked about potential mash up collaborations with Asian dining options such as Starry Kitchen and Manila Machine. Sounds like a perfect pairing.

When I visited, the flavors available included ginger ginger snap, pecan nutmeg eggnog, bacon peanut butter, apricot ume, pandan cashew, salty chocolate and their popular brown bread. One scoop (which equates to two flavors) is priced at $3.50 which is a damn good steal. 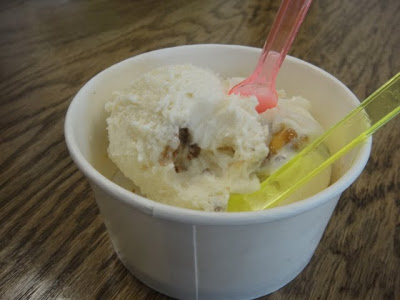 Since I was a Scoops virgin, I had to try the brown bread ice cream which is made with caramel ice cream, grape nuts and brown bread. I can see why this is such a popular flavor. It was creamy, smooth with the occasional crunch from the grape nuts. 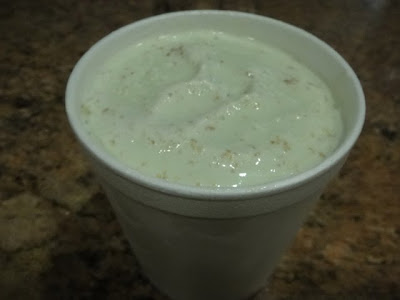 I bought a pint of the pandan cashew which was the flavor that brought me to Scoops that day. I had every intention of sharing the pint with my family but after a scoop, then the next, I knew that this pint was going to stay in my freezer. To my surprise, the pint only last two nights. The ice cream at Scoops is so light that you can really just keep eating one scoop after another without feeling the need to keel over from an upset stomach.

The ice cream at Scoops are creamy, light and the flavors are inventive and fun. They do a great job of introducing new flavors or bringing back familiar ones from childhood. Whether it be Asian ingredients that I grew up on (pandan), seasonal flavors (pumpkin eggnog), interesting combinations (hazelnut cream cheese) or a flashback of dad having breakfast (yes, he did eat grape nuts every morning), there's a flavor (and most likely more) at Scoops Westside for everyone.

That's what I keep telling everyone to explain why I can't get enough of Scoops - it's so much lighter than regular ice cream! I really can eat scoop after scoop without any ill effects to my stomach! Well, aside from giving it a proper pouch.

tee hee...the scoops voodoo...yeah, i know, it's almost like you're not eating badly cuz it's so light :)

i'm lucky to live close to scoops on heliotrope, but glad that matt can bring it out west for more to enjoy.

Love that scoops. Wish I could have tried some of your pandan cashew. I swung by on my xmas break ... missing it, so!