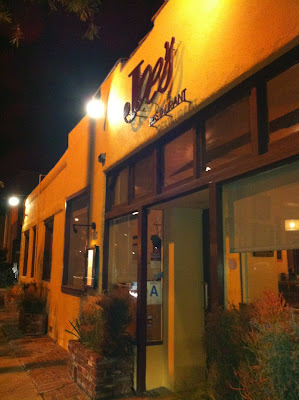 dineLA Restaurant Week started this week and runs for two weeks. Over the years, I've had some impressive meals (Spago, Michael's, RH at Andaz) and some very disappointing ones (Asia de Cuba, La Cachette Bistro, La Cachette (closed)). The thing about dineLA that I've come to realize is, you need to do some research. You have to review the online menus and do some back of the envelope math. Don't pick a restaurant if the dineLA menu offers dishes that aren't appealing to you - you might as well just order what you like from the regular menu. Do some quick math. Some places aren't really offering you a real deal (i.e. a couple bucks less than if you were to order each course separately).

To kick off dineLA week, we started off at Joe's Restaurant on Abbot Kinney in Venice. Joe's has been around for two decades and earned a Michelin Star, back in the days when LA was "worthy" of the guide. When I think of Joe's, I think California French cuisine, focusing on fresh, Farmer's Market and seasonal ingredients. They also offer a great $19 three course prix fixe lunch which I'm sure will be popular with the Google folks that will be moving into the area. 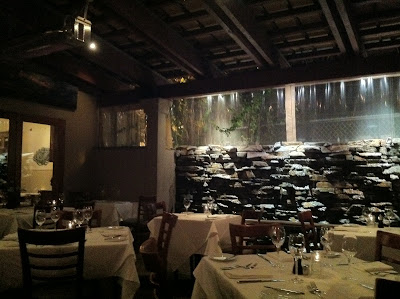 For a restaurant that's been around for a long time by restaurant standards, it still managed to feel very modern and classy. We were seated in the covered patio area. 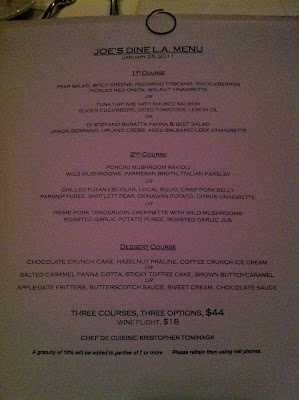 The menu featured three courses for $44, and all items were offered on the regular menu. That's important because it means that they weren't trying to stick you with crappier dishes that they wouldn't normally offer to full price diners. 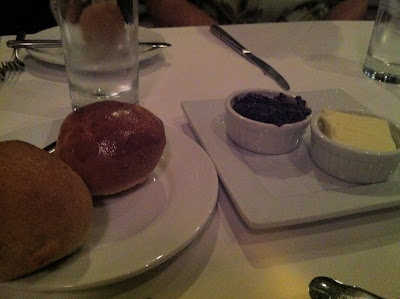 Warm bread was served with a choice of brioche, walnut and olive. The brioche bread was buttery and soft so you could eat it plain, without butter or olive tapenade. 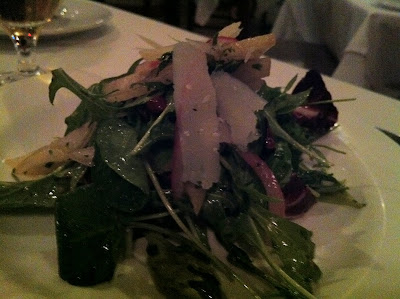 Pear Salad, Spicy Greens, Pecorino Tuscano, Huckleberries, Pickled Red Onion, Walnut Vinaigrette
A very fresh and nice salad with a combination of sweetness from the huckleberries and tang from the pickled onions. The sharp pecorino was a well selected cheese for the salad. This is the type of dish that rings California cuisine. 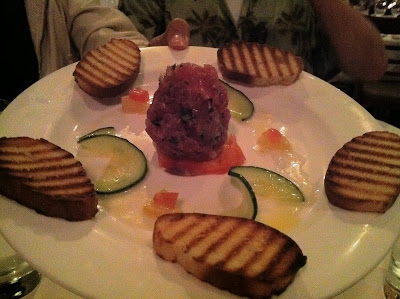 Tuna Tartare & Smoked Salmon with Sliced Cucumbers Diced Tomatoes & Lemon Oil
The tuna was fresh and the tartare was well seasoned. Surprisingly, the crostinis were quite delicious. The bread was soft in the center with a nice toasted exterior. 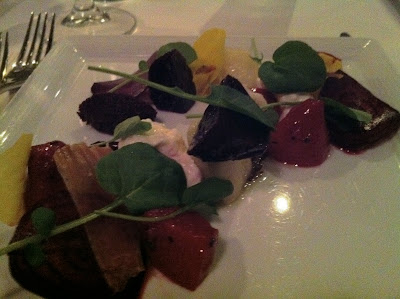 Di Stefano Buratta Panna & Beet Salad, Jamon Iberico De Bellota Upland Cress, Aged Balsamic, Leek Vinaigrette
I don't usually order salad but this was a winner. The burrata was creamy and mild, and kind of melted with the beets. It paired well with the sweet beets and sauteed leeks. The latter added an onion flavor to the salad. The beets themselves were absolutely delicious, something you would expect had been freshly harvested. The salty crispy Jamon Iberico was well balanced with the rest of the components of the dish. 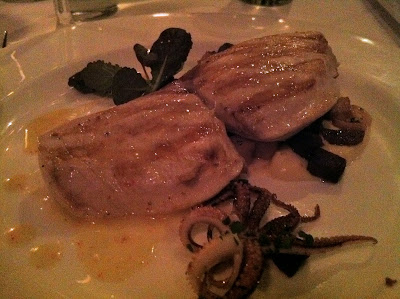 Grilled Fijiian Escolar, Local Squid, Crisp Pork Belly Parnip Puree, Fuyu Persimmon, Okinawan Potato, Citrus Vinaigrette
Whenever I see escolar on the menu, I have to order it. Just like a perfectly cooked cod, it was buttery and literally melt in my mouth. I was quite surprised with the very large portion of escolar. The citrus vinaigrette was light and didn't detract from the flavor of the fish. The escolar was served with pork belly and potatoes which seemed like hash (i.e. breakfast food, not drugs). 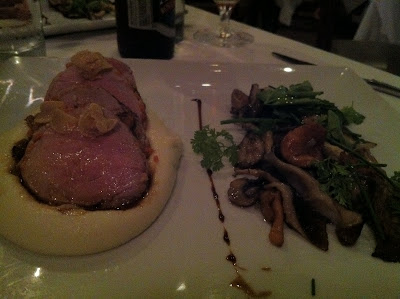 Prime Pork Tenderloin Crepinette with Wild Mushrooms, Roasted Garlic and Potato Puree, Roasted Garlic Jus
The beautifully cooked pork tenderloin was pink in the center and juicy. We all took a bite of the pork and were amazed at how tender it was. I also enjoyed the selection of earthy mushrooms that were sauteed to a point where they were soft and moist but not greasy. This was a well executed dish where every component of the dish left you wanting another bite. 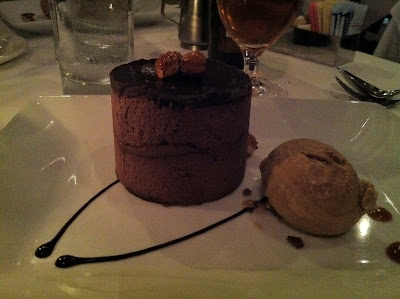 Chocolate Crunch Cake, Hazelnut Praline, Coffee Crunch Ice Cream
A very rich dessert with flavors that were similar to the ferrero rocher candy. If you love chocolate, you'll find this dessert heavenly. A layer of ganache lined the bottom of the cake, then topped with smooth chocolate mousse, a layer of chocolate wafer that added a crunch, another layer of chocolate mousse and a final topping of chocolate ganache. The cake was also served with candied nuts and ice cream. 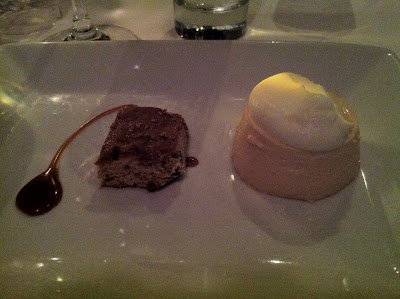 Salted Caramel Panna Cotta, Sticky Toffee Cake, Brown Butter Caramel, Whipped Cream
The panna cotta was silky and creamy, a tad lighter than the chocolate dessert. The toffee cake was a bit dry and should probably have been eaten in conjunction with a spoonful of panna cotta.

Joe's has restored my faith in dineLA. Service and quality of food at some restaurants have been known to suffer during dineLA Restaurant Week, but every aspect of our meal at Joe's was impressive. The dishes were executed perfectly and the flavors were clean and simple. Joe's has an air of refinement with its elegant dining space and exquisite menu, yet the service was very welcoming. Our waiter was attentive and even came back to confirm when I had ordered a different glass of wine from the first. This is exactly what dineLA is all about. The goal is to attract (or re-attract) diners to restaurants, with hopes of winning them over and drawing them back again. I know for sure that after this meal, I've rediscovered Joe's Restaurant and look forward to my next meal, most likely a post surf brunch.

My friend is actually going there for DineLA tonight! I just sent her your review!

Too funny we were both on Abbott Kinney that night! Wish I had seen your tweet before I left!

Can you believe I've yet to experience DineLA? Your post has got me thinkin... Glad to hear Joe's restored your faith in restaurant week!mi

i've had one hit and several misses with dinela so i've always been hesitant with it. sounds like a hit here!

Always wondered about Joe's! Looks delish and good for eating some cheese (finally, for chrissake).