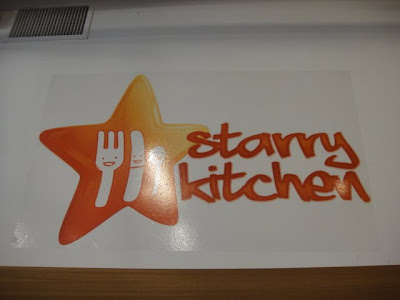 I'm a bit obsessed with Starry Kitchen. I had my first taste of their tofu balls at LA Street Food Fest, followed by an impressive dinner at Test Kitchen and just a month ago, a sampling of their mouth-watering Malaysian coconut pineapple chicken at the Malaysia Night Market Festival in Santa Monica. The reason why I've been semi-stalking the restaurant is because I really enjoyed their food on all three occasions, and felt that the flavors were pretty authentic. I can be a harsh but reliable critic when it comes to South East Asian cuisine- I grew up in Singapore and my dad's Malaysian, so I've had many years of tasting the real thing.

Even though I've had a couple opportunities to sample Starry Kitchen's food, I had never made the drive to their brick and mortar location in downtown LA. Unfortunately they are only open on weekdays and mainly open for lunch (with only two dinner services a week). When I saw that they were offering a durian cheesecake exclusively during dineLA week, I knew I had to make a visit, even if it meant having to rush over from Hollywood during lunch hour. 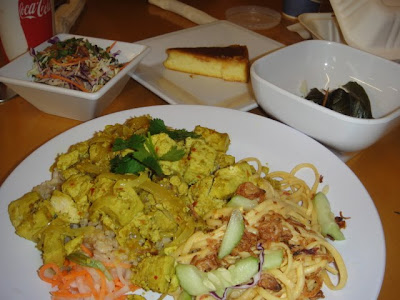 This is an aerial view of my selection which included slaw, pandan chicken, lemongrass tofu with brown rice, side of noodles and durian cheesecake. That's a lot of food for $16!

The Pandan Chicken was a well received item from Test Kitchen. The chicken is marinated in shallots, tumeric, young ginger & lemongrass, then wrapped in pandan leaves and fried. You can't eat the pandan leaf, you're supposed to unwrap it first. The chicken was juicy and well seasoned. I also loved the aroma that the pandan lent to the chicken. The meal was served with Asian coleslaw. I'm not a slaw lover but I really enjoyed this. Most importantly, the slaw was crisp and fresh, and the dressing was zesty and tasted a bit like fish sauce. 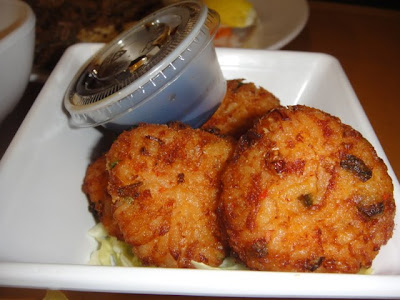 Crispy Kimchi Rice Cakes
This was another favorite at our table. The rice cakes consisted of kimchi and parmesan cheese. The cakes were surprisingly delicate and almost broke apart upon touch. There was just sufficient kimchee flavoring without being overly pungent. The side of salty soy vinegar sauce gave the cakes an additional burst of flavor. 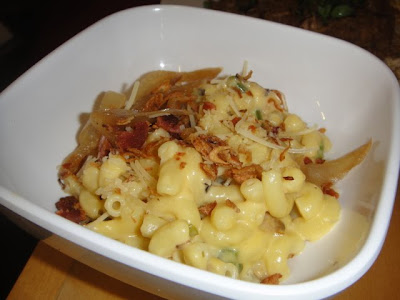 For the main course, you can decide how you wanted your entree to be served - either as a salad, wrap, banh mi sandwich or with rice. For the rice option, you could opt for brown rice or upgrade to the daily rice (it was spam fried rice on this day). 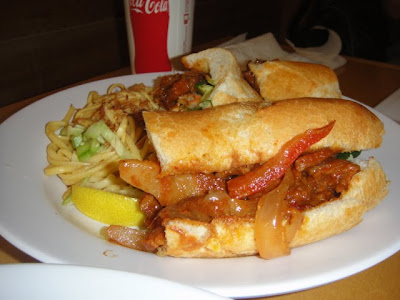 Spicy Korean Black Pork Belly
This was probably my favorite entree from the menu. The Kurobuta pork belly was juicy and fatty. I liked the Korean hot pepper sauce which seeped into the fresh bread. The meat was very well seasoned and spicy, and the portion was incredibly large - the sammie basically consisted of a whole loaf, cut into two. 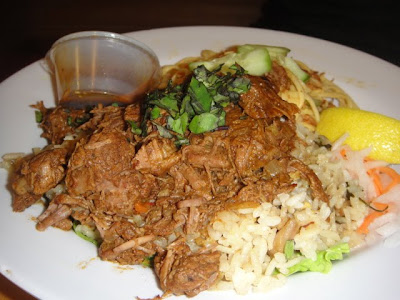 Braised VN Beef (from “Bo Kho”/Beef Stew)
The beef was simmered with lemongrass, 5-spice powder, star anise, fish sauce and annatto seeds, served with a side of au jus. The meat was tender and the jus was definitely needed for the added salt factor. We ordered this with spam fried rice but for the life of us, we couldn't find any spam in the rice. We flagged someone down who confirmed that it was indeed spam fried rice. Would have definitely wanted more visible spam pieces. 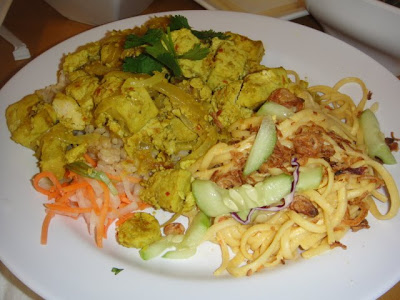 Lemongrass Tofu
I surprised myself by ordering this because I have never ordered tofu as an entree, especially when there's pork belly on the menu. But I love lemongrass and had heard that this dish takes two days to make. I liked the flavoring of the tofu which was sauteed with onions. This really goes to show that the proper seasoning can really make vegetarian dishes quite tasty. Unfortunately the side of noodles were served cold (I wished they were warmer) and I thought it lacked seasoning.

For dessert, you had a choice between the pandan flan, banana & tapioca in caramel coconut milk or durian cheesecake. There was no hesitation, I knew I was here for the durian cheesecake. I grew up eating durian in Singapore and Malaysia. It's the King of Fruits and is known to be stinky (some compare the scent to rotten eggs). The fruit itself is a prickly beast which you have to chop open in order to get to the flesh. The edible portion of the fruit is soft and creamy, almost like custard. If you have an issue with texture, you might be turned off by the fruit. 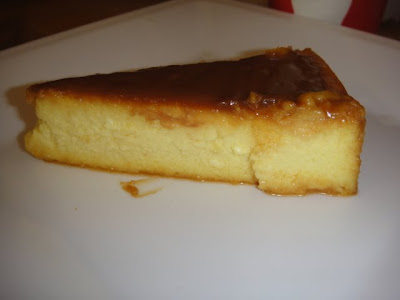 Durian Flan Cheesecake
This cheesecake was very light, I would compare it more to an airy Japanese cheesecake than an American cheesecake. The durian flavor was definitely obvious but it wasn't overpowering. In fact, I tried sniffing it out and didn't get a pungent durian smell. The cheesecake was topped with a layer of sweet chocolate caramel sauce. If you haven't had durian and want to get a flavor, this is the best form because you'll get a taste of durian without being turned off with the mushy texture of the actual fruit. This was definitely worth the 25 minute drive to downtown.

The place was packed on a Friday lunchtime, with a line out the door. It's great to see how Starry Kitchen is introducing Southeast Asian flavors to Angelenos who have mainly only been exposed to Chinese food via takeouts or Panda Express. The Southeast asian cuisine is really much different. There's no orange chicken or Mongolian beef here. Instead, it's usually very flavorful and more often, spicy. You'll also be introduced to new ingredients such as pandan and durian.