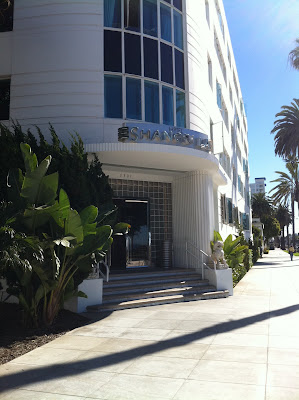 I've been at a loss after my favorite westside brunch spot (with $9 bottomless mimosas) Bite Bar & Bakery shut its restaurant operations. If you can't already tell, I love mimosas. And I love drinking a lot of mimosas. When I heard that Hotel Shangri-La in Santa Monica offered bottomless mimosas during brunch, I decided to check it out in hopes that it would be my Bite replacement.

The hotel was renovated a few years ago, and is located across the Pacific Ocean and a stones throw from 3rd Street Promenade. 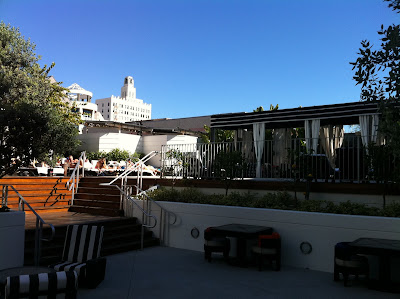 The best spot to brunch on a gorgeous weekend afternoon is in the cabanas at their outside pool area. Since we got there at 11am when brunch started, we were able to grab the coveted spots. Some of the late arrivals were left to dine in the scorching sun. There are also tables in the dining room for the sun-averse. 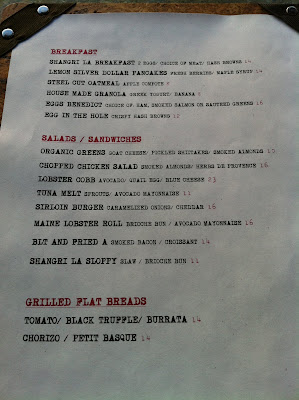 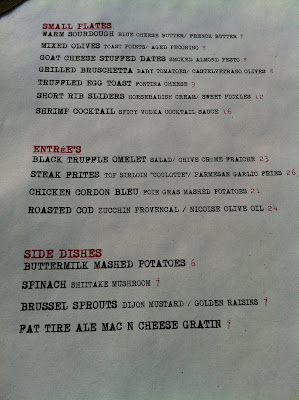 The menu includes a few breakfast items, small plates and entrees. Bottomless mimosas or bloody marys are an additional $12 and if offered on both Saturdays and Sundays. 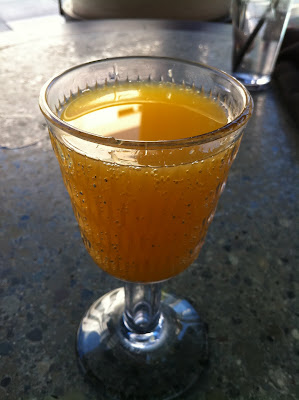 The mimosas were served in a tacky plastic cup, which was odd for a nice hotel in Santa Monica. The drinks were spiked with a good amount of Champagne (or I'm guessing, sparkling wine) but the waitress was tough to locate so I didn't get in as many drinks as I had hoped during the course of brunch. 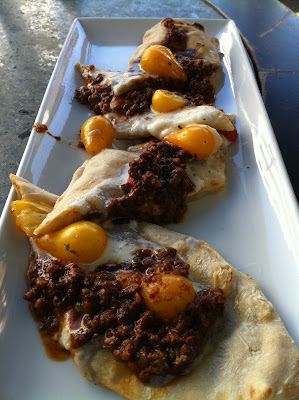 Tomato, black truffle, burrata flatbread (with extra side of Chorizo)
My friend was having a tough time deciding between the two flatbreads (the other one being chorizo with petit basque) so she decided to get the best of both worlds by ordering the burrata and truffle flatbread, with an additional topping of Chorizo. I thought this would be an odd pairing and that the Chorizo would overpower the truffle but in fact, the ingredients all worked harmoniously. The chorizo added an intense saltiness to the flatbread. The melted burrata and greasy chorizo melded together. 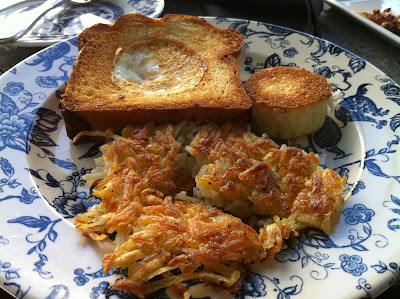 Egg in the hole, crispy hash browns
I was really glad they used brioche instead of regular bread. The brioche was airy and buttery. I also liked that they kept the leftover circular bread on the plate. The hash browns were crispy, not too greasy and adequately seasoned. The only critique I have is that the egg could have been a little runnier.

I wouldn't say that the brunch at Hotel Shangri-La is one of the best in town, but right now, it's ranking well on my Westside mimosa brunch spot. The food is decent, the price is moderate (mid-teens for most dishes but over $20 for entrees) but the $12 bottomless mimosas and the lovely outdoor seating takes this brunch spot up a notch. Now if only the waitress would come by more often to fill those plastic mimosas glasses.

SERIOUSLY? Plastic wine glasses? Because they're afraid you're going to drop it onto the concrete patio foor? Keep it classy Shangri-La.

Remember that rule about no glass around the pool?...yeah, they're following it. (Even though the glasses they chose were hideous!)