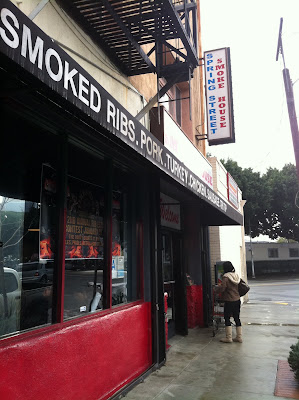 This past Sunday, Spring Street Smokehouse held their 2nd annual rib eating competition. A $30 entry fee gets you into the contest, where the winner had to eat the most ribs in 20 minutes. We weren't going to participate but we were present to support the owner, who is a good friend of a friend. The Smokehouse is located in Chinatown and very popular with the lunch crowd. In an area that's swarming with dim sum restaurants, the Smokehouse stands its ground.

It's casual inside with a industrial feel. They also have a few TVs which makes this a great place to catch some sports. Each table is set with condiments and a loaf of bread. 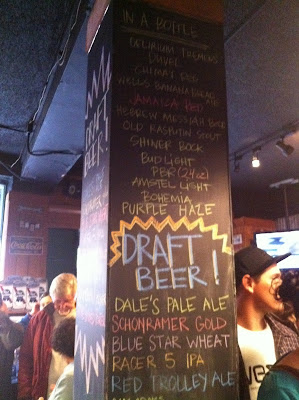 The Smokehouse got a face lift a few years ago and added a great selection of craft beers to their inventory. 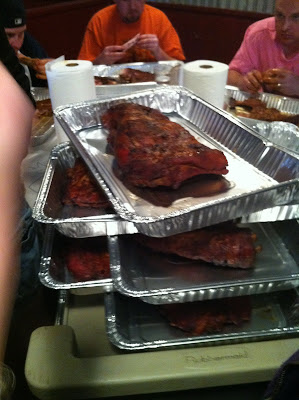 Smokey ribs fresh off out of the kitchen for the competition. They were actually really massive slabs. 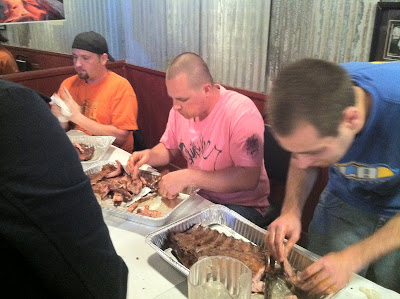 The contestants were hard at work, breaking down the slab. Apparently, the key is to eat it slow and steady. We saw one guy plow through 3/4 of a slab but halfway through the competition, he started to sweat profusely and looked like he was about to gag. Many contestants couldn't even get through half a slab and gave up even before time was over. 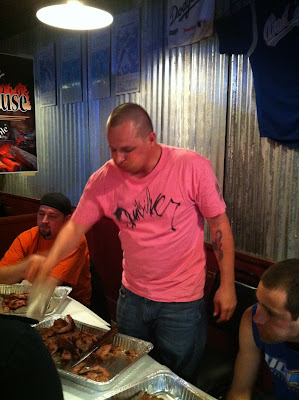 The winner (who is a friend's husband) was last years runner-up. This year, he ate 16 ribs FTW. In addition to having his name on the board, he also received a tour and tasting at Firestone Brewery, gift certificate to the Smokehouse, and t-shirts and hats. 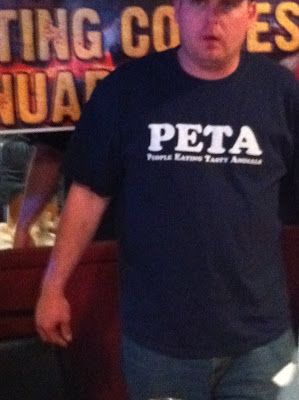 After the contest, we sat down for lunch and ordered a few items. 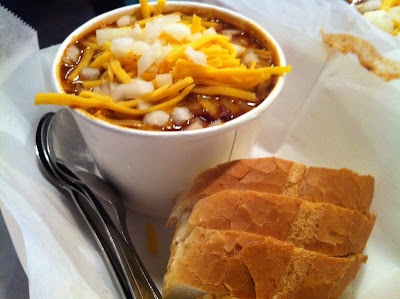 Smokehouse Chili. A hearty portion with chunks of beef and beans, and top with shredded cheese and zingy diced onions. The chili was served with fresh crusty french bread. 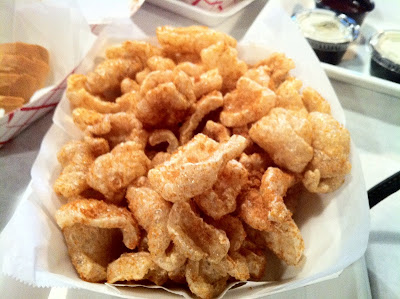 Cracklins. If you've only had the packaged kind from the gas station, you're missing out. These cracklins were warm and airy, and seasoned with pork rub which had a sweet and salty flavor combination. But beware, they are very addictive. 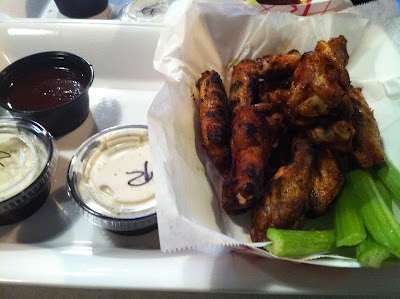 Smoked hot wings. I'm not much of a BBQ sauce fan so we ordered this with the sauce on the side. The chicken wings were finger licking good. They had a nice char to it but the meat was tender and smoky. 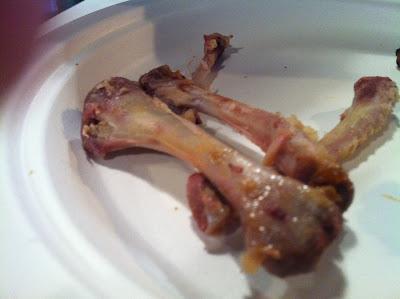 This was what's left of my chicken bones. If there's a competition for cleanest bones, I think I'll win. 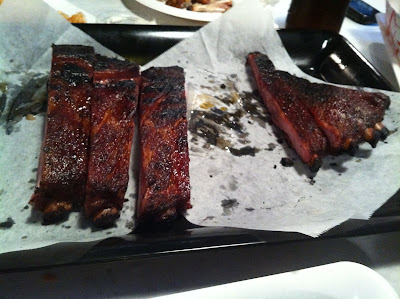 Pork Spare Ribs - Select lean, juicy pork ribs, seasoned with the Smokehouse special rub, slowly smoked and served with homemade BBQ sauce.
The full rack has 12 ribs, the photo was taken after a few of us had grabbed some ribs. They also serve ribs in a 4 rib basket or a half rack. The BBQ sauce is more of a spicy vinegary sauce (Carolina style) vs. tomato based. The meat was moist and tender. I prefer to eat my ribs sans sauce so that I can get the full flavor of the pork. Thankfully, the ribs at the Smokehouse were smoky and flavored well so it was tasty on its own. I was quite impressed with how juicy it was, and how it tasted great even with minimal sauce. The portion was also very large. Initially I thought it'd be easy to eat a whole rack but the ribs were very meaty and filling. 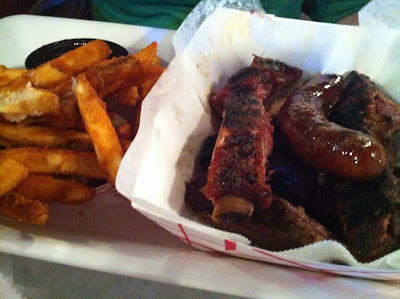 Sampler Plate - 2 Spare Ribs, Hot Link, Chicken & Brisket, and a side. This is a great way to get a flavor of everything. 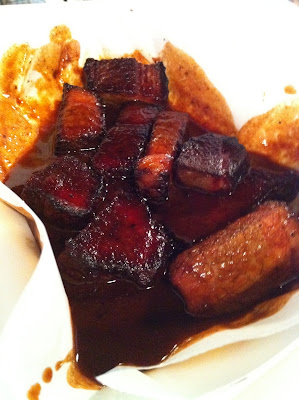 wow. i am sooooooo gonna visit this place since it's so close!

yum! i live in dtla so definitely have to give this place a shot! have passed by numerous times but never thought of trying it..

I love ribs, but I can never manage very many, disappointingly enough. The thought of a rib eating competition is so overwhelming to me, but they look very tasty. :P

Congrats to your friend's husband on winning the contest. Burnt ends are one of my favorite things. Will have to try this place soon!