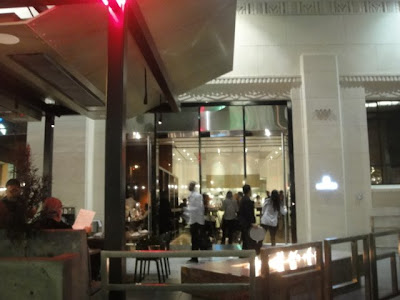 Los Angeles restaurant diners waited eagerly for the opening of Sang Yoon's new Asian restaurant Lukshon. He's gained a cult following, with many claiming that his Father's Office burger is the best in town. Personally, I haven't tried it. I dislike cheese and FO does not allow substitutions. Even though Lukshon is situation beside FO at the Helms Bakery, it's quite a different concept. The menu is Southeast Asian focused, the wine list is more prominent than beer, and the restaurant has a more upscale feel. But no substitutions here as well. 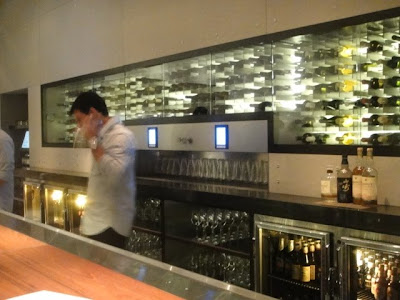 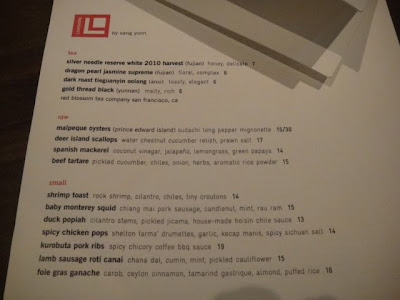 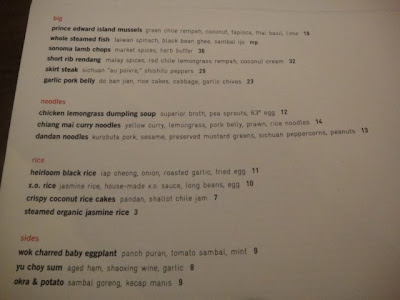 The menu draws influence from Southeast Asian and Chinese cuisines. The dishes are served family style with a selection of small dishes, entrees and sides. 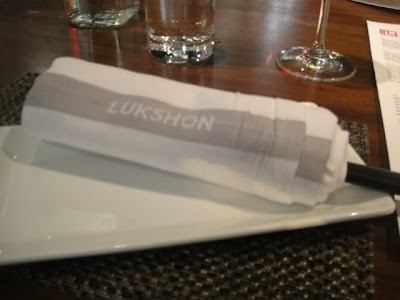 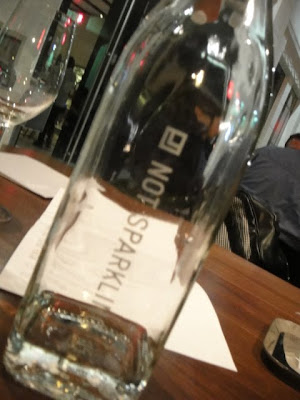 There's a lot of attention to detail in terms of the decor. That's just how Yoon operates. The napkins and water carafes were all custom designed with the Lukshon logo. Side note, I appreciated that Lukshon offers complimentary water (both sparkling and flat). 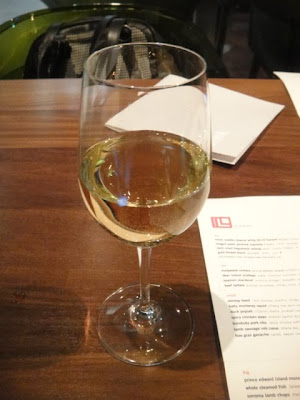 Interestingly, apart from a Rosato, the other wines offered by the glass were only Whites, not Reds. I was first introduced to Albarino wine at Father's Office so I decided to order a glass at Lukshon. The Cambiata was light and crisp. 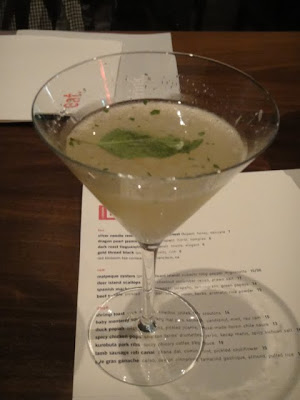 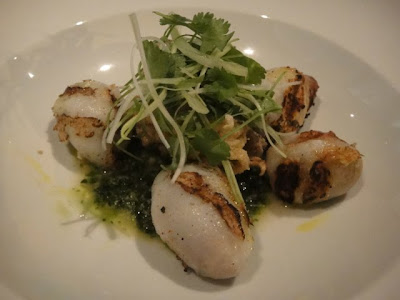 Baby monterey squid ~ chiang mai pork sausage, candlenut, mint, rau ram
The squid was tender and not overcooked. The aromatic chang mai sausage brought a nice unique flavor to the squid, however I only wished that it was minced so you could get the flavor without having to chew through a huge piece of meat. The rau ram added a cilantro-like flavor and some heat. The dish was topped with fried calamari which added crunch and unlike most joints, wasn't greasy at all. 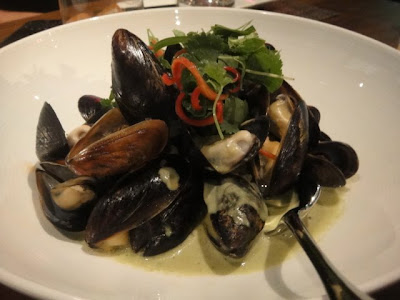 Prince Edward Island Mussels ~ green chile rempah, coconut, tapioca, thai basil, lime
As much as I enjoy the traditional French mussels marinieres, Lukshon's version with curry flavoring is more mouth-watering. The thick broth was creamy and rich, and with the right amount of seasoning. The dish was only missing rice which would have been great to sop up the sauce (we asked, but they do not offer plain rice). The mussels were large and plump, with a lovely oceanic taste. There were also tiny tapioca pearls in the broth which added texture to the dish. 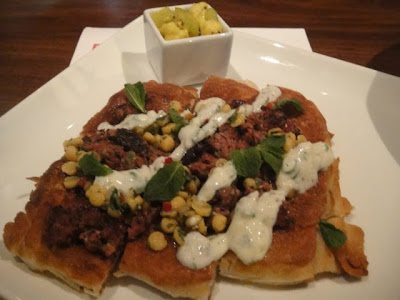 Lamb sausage roti canai ~ chana dal, cumin, mint, pickled cauliflower
Growing up in Singapore, I used to eat roti canai on a weekly basis so I was excited to sample Lukshon's version. The roti was crispy and thick but not doughy. I enjoyed the lamb with Indian spices and al dente lentils. The side of pickled cauliflower added a sour component that worked well with the richness of the lamb. 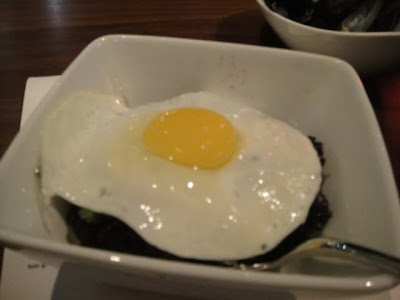 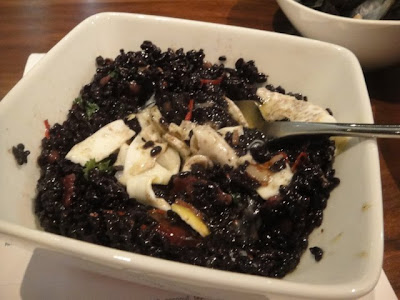 I like the firmer texture of black forbidden rice over white. This was a comforting dish which got its saltiness from the Chinese sausage and richness from the runny egg yolk. I thought it needed just a tad more salt but overall, this was very tasty. 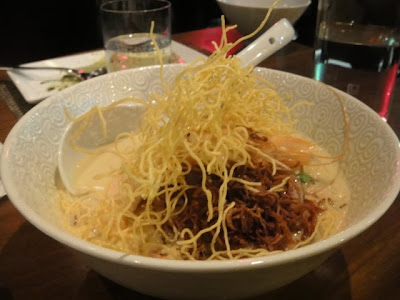 Chang Mai curry noodles ~ yellow curry, lemongrass, pork belly, prawns, rice noodles
Most diners have only been exposed to curry served with rice, but my favorite pairing is curry soup with noodles (think laksa). I liked the lighter and delicate texture of rice noodles over the starchier rice. The curry flavor infused with lemongrass was well developed. The slices of pork belly were rich and buttery. My only critique was that the sprouts were raw (they had a strong flavor) and they skimped on the prawns (there was only one in the dish). 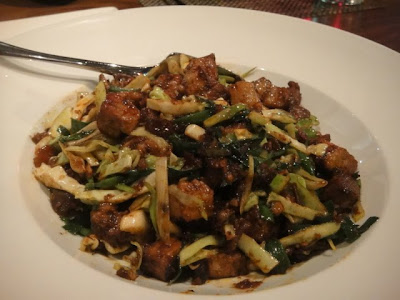 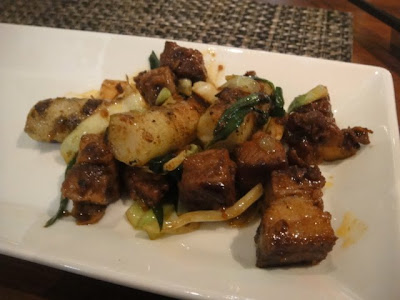 A closeup of the dish illustrates the fatty pieces of pork belly. I wasn't expecting the dish to look like a stir fry or something similar to moo shu pork, but I actually quite enjoyed it. The rice cakes were toasted and chewy, which reminded me of the Korean duk bok ki. The pork belly was tender and mixed in with spicy and salty black bean sauce. The flavors were good, but you could find almost similar dishes at a Chinese restaurant. 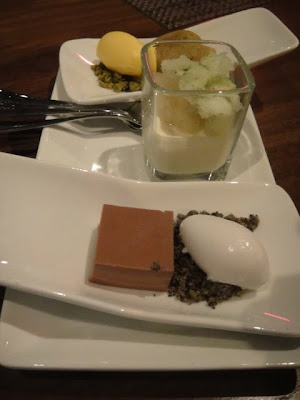 Lukshon doesn't offer dessert on their menu but they do bring by complimentary desserts. The trio selection included chocolate ganache with Vietnamese coffee struesel & coconut sorbet, Lemongrass panna cotta with pressed Asian pear with yuzu, and Pistachio madeline with pomelo marmalade and mango sorbet. Apart from the madeline which was a bit too dense, the desserts were a nice end to the meal.

Sang Yoon does an exceptional job of creating a menu that brings strong delectable Southeast Asian flavors to the table, but in a refined and exquisite way. For a restaurant that has been open for less than a month, service was spot on. Our waiters were attentive and knowledgeable, and water glasses were always filled. Lukshon is definitely off to a good start, introducing spicy and robust flavors, and quickly taking over Culver City.

Did someone say dukbokee?! I am obsessed with the stuff and am excited to try Mr. Yoon's upscale version. Thanks for the tip.

Haha I was thinking the same thing as Cathy when I saw rice cakes mentioned! I perked right up! I'm tots going to coordinate with her so we can get out there and try it! :)