dineLA: The Bazaar (the novelty never wears off) 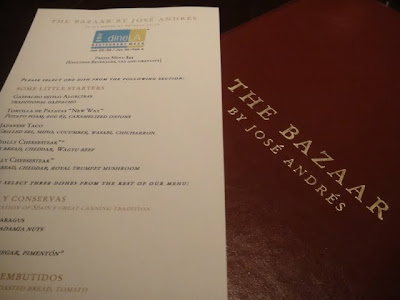 For our last dineLA Restaurant Week selection, we scored dinner reservations at Jose Andres's The Bazaar at The SLS Hotel. Apparently everyone had the same idea because the place was packed mid week. I've dined there a couple times but it was a first for my dining companions. The menu focuses on traditional and modern Spanish tapas, with many dishes prepared using molecular gastronomy techniques. Most of the dineLA deals out there consist of 3 courses (appetizer, entree and dessert) but given their smaller portions, The Bazaar rightfully upped it to 5 courses for $45. If you do the math, it's an amazing deal since most of the dishes are priced in the teens. Additionally for dineLA, the menu selection is large and includes many of their signature items.

The SLS Hotel, designed by Philippe Starck, is luxurious, chic yet playful. When you dine at The Bazaar, it's great to absorb the whole experience by grabbing a drink at Bar Centro, then dinner in the dinning room, followed by dessert in their Patisserie.

When we were seated, I liked that the waitress brought up the dineLA menu. Often times, restaurants don't try to promote it or worse still, make you feel cheap when you request it. 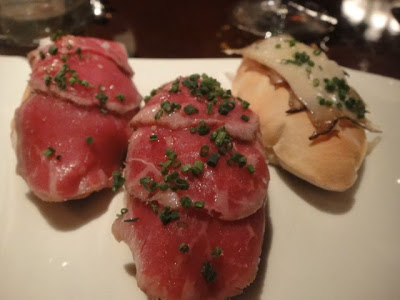 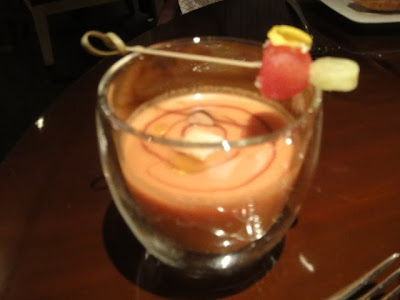 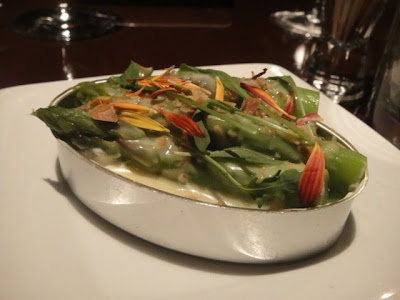 Green asparagus labne, macadamia nuts
The asparagus was ample and cooked to a tenderness without turning mushy. The sauce was a sour yogurt cheese sauce that added a tang to the dish. 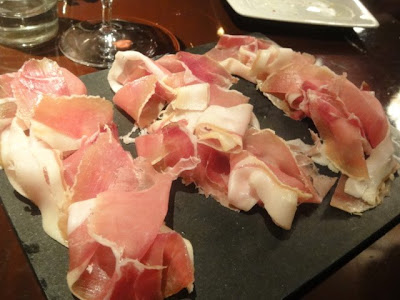 Jamón Serrano Fermin (2 oz)
When you dine at a Spanish restaurant, you have to order Jamon especially if there's a leg of ham hanging by the kitchen. The cured ham was very fresh and sweet, unlike the tougher and greasier version I recently had at Julian Serrano in Vegas. I was quite surprised with the portion of this dish. I was initially planning to order two plates but I'm glad I didn't. This was more than sufficient for the four of us. 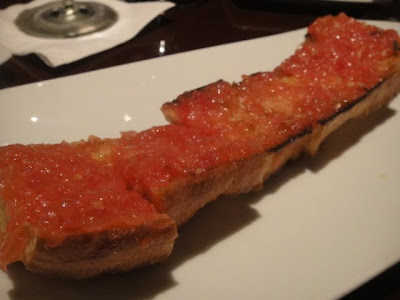 The Jamon was served with traditional Catalan style toasted bread with tomato. 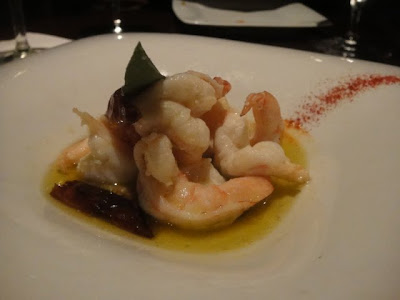 Sautéed shrimp, garlic, guindilla pepper
I thought this was a very simple but well seasoned shrimp dish. The chili and garlic sauce brought some lovely flavors. 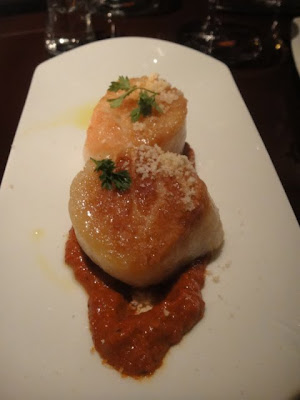 Sea scallops romesco sauce
There were two large scallops to a dish so we ordered two plates. It's so easy to screw up scallops but the kitchen did an amazing job. The scallops were plump and tender, with a nice sear. The romesco and pine nut sauce richen the dish and brought a Spanish flavor to the plate. 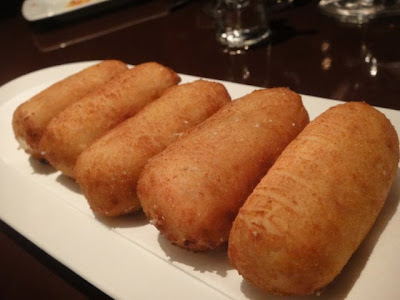 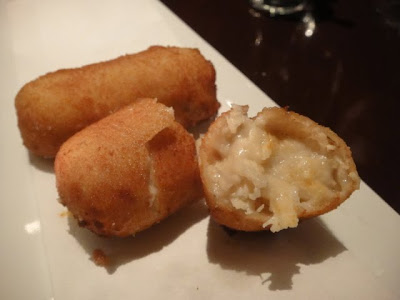 I shied away from bechamel sauce after an ill reaction to a moussaka I had in Barcelona. Thankfully, I've had The Bazaar's croquettes before and knew I could stomach it. The sauce was creamy and tasted exactly like a pot pie. The breading was light and crispy so it didn't add any more heavy components to the already rich filling. 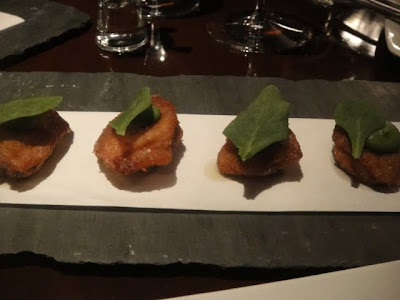 Boneless chicken wings green olive purée
I thought the presentation was absolutely elegant. The boneless wings were delicate and not what you would expect from wings, which can usually be a chore to consume in public. The wings were lightly breaded and the meat was juicy. The dollop of olive puree under the leaf added an intense briny flavor. 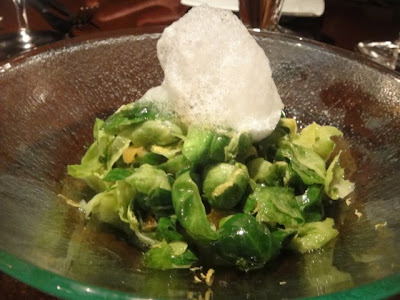 Brussels sprouts, lemon purée, apricots, grapes, lemon air
This unassuming dish was perhaps one of my top dishes. The leafs were separated and had a bit of a crunch to it.The nutty sprouts were dressed in a lemon sauce. We all loved the lemon air which added a restrained citrus element. 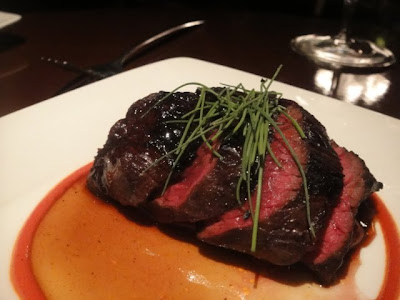 Beef hanger steak, piquillo pepper confit
The beef was cooked to a nice medium rare. I thought this was a good dish but perhaps not as exciting as the previous courses. 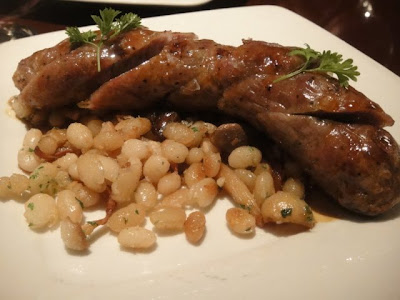 Butifarra Senator Moynihan Catalan pork sausage, white beans, mushrooms
The Catalan sausage was very flavorful with a bit of a spice. I actually really enjoyed the beans. They were crispy on the outside and added a crunchy texture. The components of this dish reminded me of a hearty cassoulet.

I was quite surprised when we were done with our savory courses. I thought I would have been painfully stuffed but the portions were just right. We decided to continue our meal with desserts at the Patisserie across the hall. 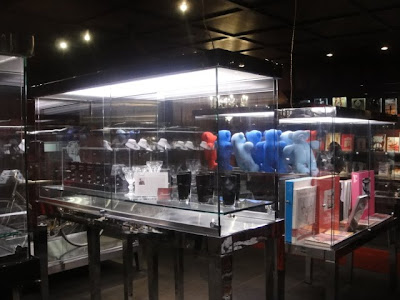 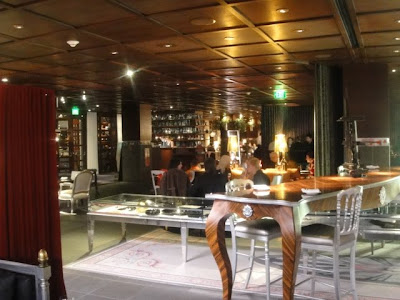 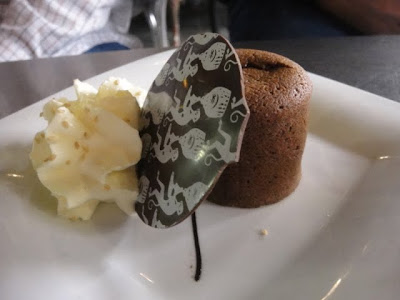 Creamy Chocolate Heart, Coffee and cardamom
The chocolate cake was similar to a molten chocolate cake with a gooey center. It was very rich and decadent. The additional piece of chocolate ganache was added an elegance to the dish, which was apropos for the fancy setting of the Patisserie. 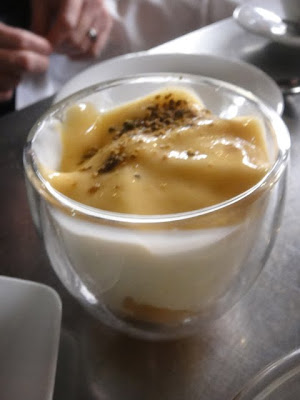 Greek Yogurt Panna Cotta, apricots and muscat gelatin
The panna cotta was surprisingly rather heavier. I liked the flavors of the dessert but it almost had the consistency of pudding. And I wished it was served a little bit colder- it was lukewarm. 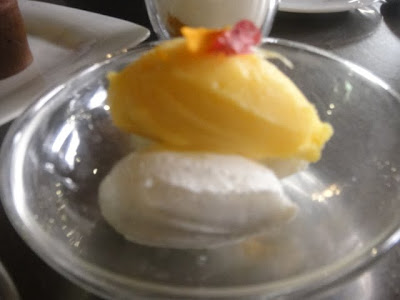 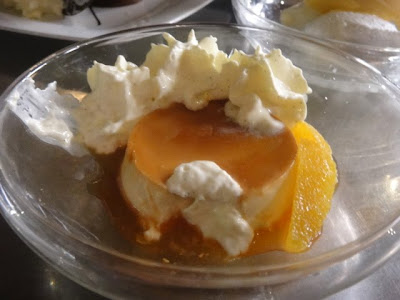 Traditional Spanish Flan Vanilla and fruit
This was my favorite of the desserts. The flan was light and doused in a sweet caramel sauce. 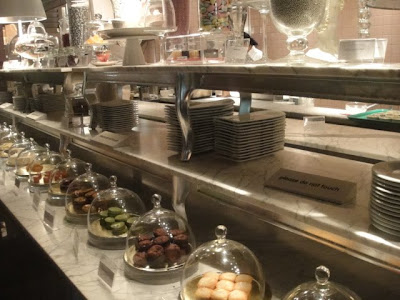 The Patisserie was still churning out sweets at 9pm. Their selection included bonbon, cookies, pastries and cupcakes. 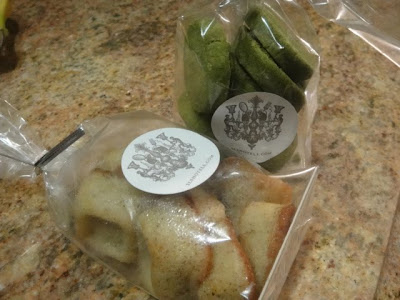 Of course I had to get something to go - the green tea cookies and financiers (my favorite).

A lot of people mention that The Bazaar is great, but only for a first time experience. After that, the novelty apparently wears off. True my dining companions were wowed, but I was equally impressed even after a couple visits. Yes, I am no longer bewildered by the liquid nitrogen and theatrics, but I am still in awe of the food. It's solid. The execution is spot on, the flavors were there and the food was well portioned. I thought the service was also great despite being a full house. I liked that they embrace the restaurant promotion and didn't make you feel second-class for partaking in it. I also appreciate that they offered a large menu selection and included their popular dishes. You can tell that they definitely wanted our dining experience to be similar to a full-price paying diner. Even after five visits, I can say that dinner at The Bazaar is still an excellent and exciting experience .

I loved those chicken croquettes when I was hanging out at the bar one night! I really need to go in for dinner - should have taken advantage of the DineLA special! Those brussels sprouts sound tremendous! :)

I've wanted to go to the bazaar forever. Too bad I'm on the other side of the US. The dinner looked amazing! Those croquettes so comforting. yum!Also, I'm surprised there wasn't much seafood brought out. Hes usually a fan.

In my case, the novelty of a particular preparation only wears off if it serves no apparent purpose outside of being "fun".

So for example those "philly cheese steaks" with the air-bread and cheese never seem to wear off because the purpose behind the novelty. The light bread, uber gooey cheese, etc serve a purpose in making it better than your average philly cheese steak. Same deal with the coconut floating island and having the liquid nitrogen play an integral part in making the dish.

Conversely, the spherical olives seems like one big gimmick. I'm not sure how often I'd pick a spherical olive over a real one.. there just doesn't seem to be any purpose behind spherification outside of the fun of having something pop in your mouth.

Thanks for writing this post. I keep putting The Bazaar on the back burner, but reading what you ate made me excited again to try it!