Todd English's P.U.B, Vegas: You give pub a bad name 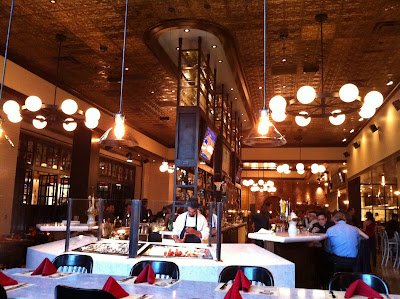 When I walked out of the Aria Hotel where we were staying, the words P.U.B etched along Todd English's restaurant immediately caught my eye. I love pubs. I love their casual feel and friendly service. I love hearty pub fare, preferably English or Irish. Unfortunately, Todd English's P.U.B (which stands for Public Urban Bar) was anything but. The food was dismal and the service was lacking. This was not something that I expected of Todd English, a James Beard winner and celebrity chef.

Even though the bar was too lit and the decor too trendy to be considered a traditional pub, the ambiance was the only thing I liked about the place. It's a fancy pub, really. The restaurant bar has high copper plated ceilings, marbled tables and a raw bar. 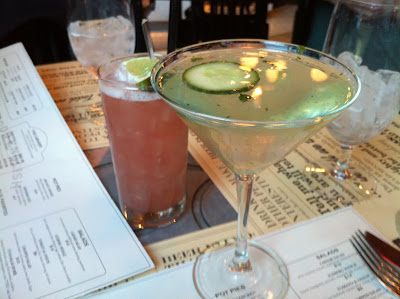 The “Henry Moore” (Bombay Saphire Gin shaken cucumbers, mint and mint flavored simple syrup)
Todd’s Margarita (Herradura Tequila, Combier Orange Liqueur, Pineapple juice, and a splash of Chambordan)
I should have stuck with beer because the cocktails were pretty bad. It seemed like P.U.B was trying to get creative with cocktails by offering more than just standard cocktails, beer and wine. However their cocktails were not very good. The margarita tasted more like a mai tai, and the Henry Moore was not chilled enough. The latter also lacked balance and was heavy on the elderflower. It just seemed like an ordinary bartender had prepared these drinks instead of a trained mixologist. Perhaps they should have just stuck to making Manhattans or Cosmos instead. 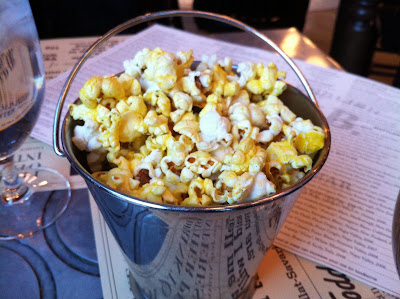 Complimentary popcorn in tin bucket was a nice start. It had a nice combination of salt and cayenne spice. 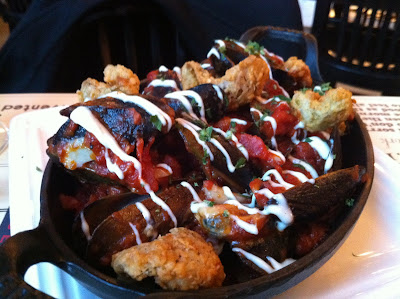 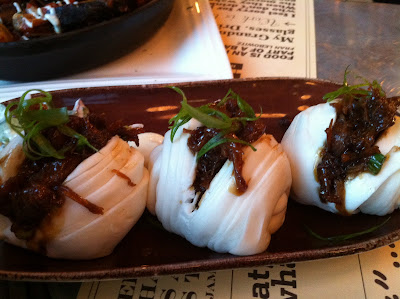 Duck Buns ~ shredded duck, hoisin sauce, chopped scallions
The duck was shredded and tender, but was over sauced with sweet hoisin sauce. The bun was also a bit doughy but at least it was warm and soft. 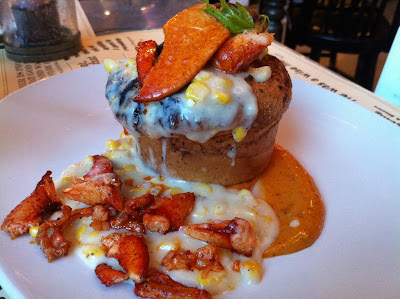 Lobster Poppie ~ yorkshire pudding, creamy corn, brown butter lobster
There was a nice amount of lobster however it was a little rubbery. The yorkshire pudding was prepared well and was fluffy and light. I liked the rich creamy sauce with sweet corn however I think the sauce could have been served warmer. It was lukewarm so it felt like the dish had been sitting out for a while.

Apart from the decor of the restaurant, I don't think there was one thing I enjoyed about P.U.B. I thought the food was mediocre considering it's attached to an award winning chef. This is what I dislike about celebrity chefs opening up restaurants all over the country but not ensuring that the quality of the food is up to par with their flagship or best restaurants. Perhaps we ordered the wrong dishes but I would think at least one of the three might have been decent. Service was also disappointing. We were there mid afternoon so it wasn't even busy. We waited about 15 minutes before anyone came by to drop off menus or take drink orders. This is a pub for goodness sake. At least get a drink in our hand. Water glasses were not filled even after I had asked a few times. You could see the staff just hanging around chitchatting and joking around, with no sense of urgency to check on diners. I really wasn't expecting much when I sat down, but when I left, I felt a little cheated. I had hoped to get the good comfort food and warm service of a pub. That was not the case at P.U.B.
Hits: decor
Misses: food, cocktails, service
Rating: *

Yikes. Everything sounds like a complete disaster! What a bummer! Thanks for taking one for the team with this one.