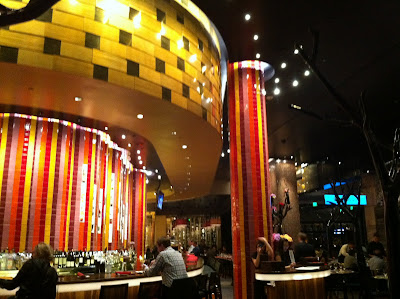 The truth is, I didn't know who Julian Serrano was. I didn't know that he had helmed the kitchens at Masa in SF and Picasso at the Bellagio. I didn't realize he was native to Spain despite his focus in French cuisine. Over a year ago, Serrano opened his namesake restaurant at the Aria Hotel in Las Vegas. We only decided to pop in for a quick bite because we were staying at the hotel. I was hesitant initially. The glaring color scheme, fake lacquer trees and Alice in wonderland feel threw me for a loop. I was expecting glitzy, flashy, mediocre Vegas food. Instead, his food was simple and tasteful, yet relatively affordable. 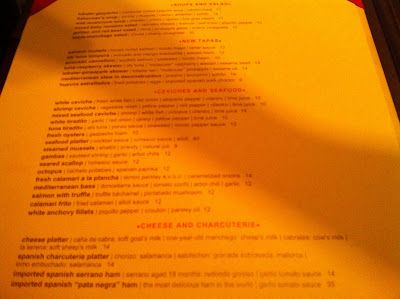 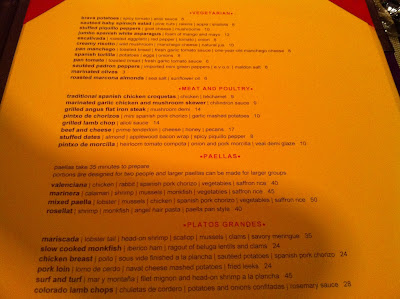 A large part of the menu comprised of Spanish tapas but they also offered larger dishes such as paella and entrees. Since we were only looking for a small bite before bar and party hopping, we opted to share a few tapas. 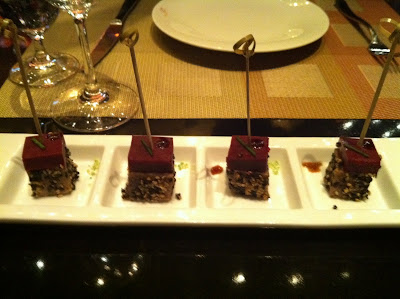 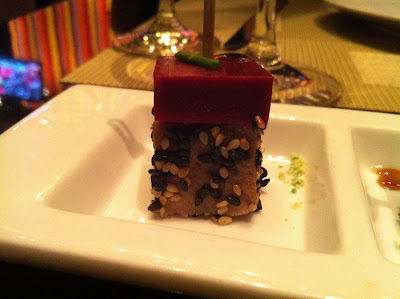 This was listed under the "New tapas" section. The presentation was modern and elegant, something you would expect from a fine dining establishment. The raspberry was formed into a gelee and the tangy sweet flavor combination really popped. The tuna was fresh and raw on the inside with a sear on the outside. I liked the texture of the sesame seed and the clean flavors of the dish. Octopus - cachelo potatoes, spanish paparika
This is a more traditional Spanish tapas dish, which was rather hearty. The octopus was sizable in portion and was cooked tender to a point that it almost seemed like a piece of fish. The potatoes was well seasoned and crumbled easily. I really liked the simple and rustic preparation. 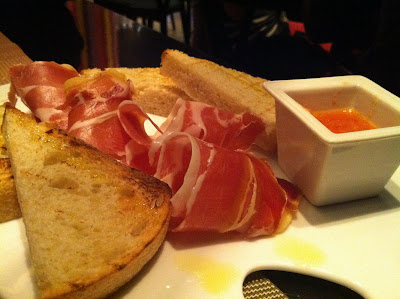 Imported Serrano Ham, aged 18 months, garlic tomato sauce
The Serrano Ham had an intense flavor and was a bit on the greasy side. Personally, the cured flavor was too strong for me, I much prefer Prosciutto over Serrano. But that's just a personal preference. You can make your own Pan con Tomate with the crusty bread and tomato garlic sauce. 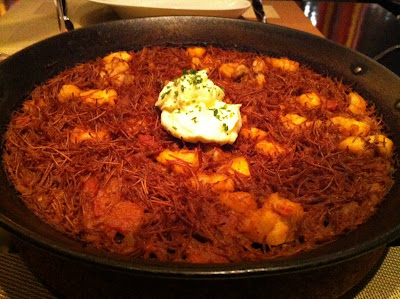 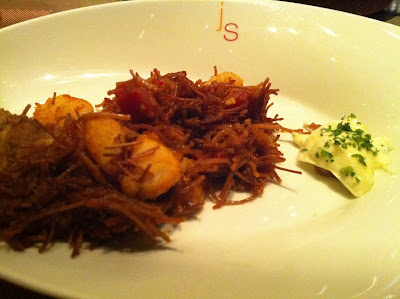 This was by far one of the priciest dishes of the night at $40 but it was served in a huge paella pan and was quite substantial. I am obsessed with Fideau which is a form of paella that is prepared similarly but with noodles instead of rice. I prefer fideau over traditional paella because it's lighter and less starchy. The pasta was toasted on the outside yet moist in every bite. Each thin strand of angel hair pasta completely absorbed the rich seafood broth. The seafood was cooked perfectly and well seasoned. Every bite was so flavorful that even the creme fraiche with a tinge of garlic might have been unnecessary, although was a nice addition.

The menu at Julian Serrano was rather extensive. I liked having the opportunity to choose from an array of dishes, prepared both traditionally and nouvelle style. I thought tapas style dining was the perfect choice for us since we had been grazing all day and really just wanted a light meal to hold us over. When we first arrived at 7pm, the restaurant was empty but it quickly filled up at 9pm. I guess Vegas goers like to dine later. I personally prefer the early bird special. There were some service hiccups such as the tapas coming out even before the wine was served. But overall, the meal was satisfying. And the rossalet really brought it up another notch.

Hits: rossalet was the winner
Misses: got real crowded
Rating: ***

I am loving your Vegas posts! It's like a roadmap for my next visit! :D