Bravo was right, Michael Voltaggio is the Top Chef! 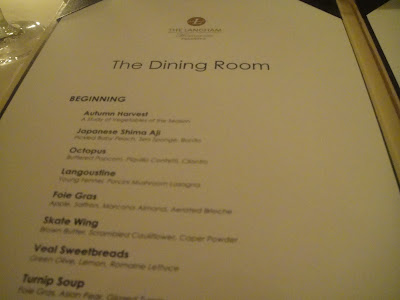 Top Chef is one of my favorite TV programs and Angelenos are fortunate enough to taste the creations of some of the cheftestants from prior seasons. We have Stefan's LA Farm, Marcel at The Bazaar, Ilan at The Gorbals and last but not least, last season's winner Michael Voltaggio at the Langham Pasadena. Voltaggio was known for his creative dishes and cooking techniques so we were excited to try his cooking. He has a strong resume. He was nominated for a James Beard Award and helped open and create the menu for LA's top restaurant The Bazaar at the SLS Hotel. You can believe that he was part of The Bazaar, which is a cutting edge restaurant that utilizes molecular gastronomy preparations. He is now at The Dining Room at the Langham Pasadena.
The Dining Room only offers tasting menus, no ala carte. 4 course for $79, 5 course for $95 or Chef's 7 course for $125. You get to choose your plates for the 4 and 5 course menus while the 7 course is all a surprise and the dishes are whatever Voltaggio wishes to serve that day. We wanted to do the 7 course but since I am a darn picky eater, I wanted to select my own dishes. God forbid one of the dishes would be the salmon. The 5 course menu was the best option because we were able to order different dishes and sample a total of 10 dishes. 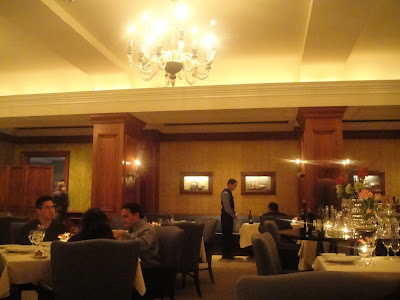 The Dining Room doesn't suit Voltaggio's personality. The decor is formal and a bit bland. It is nothing like the spunky, inventive chef. Odd pick for him you think? He is actually quite happy there. The Dining Room is HIS restaurant (vs The Bazaar, which is Jose Andres' baby), he calls the shots, cooks in the kitchen at all times, creates the menu which changes constantly and has a small and manageable team of eight. The Dining Room is closing in April for two months for renovations. Don't worry, he's still staying on and is going to get rid of the stuffy decor. 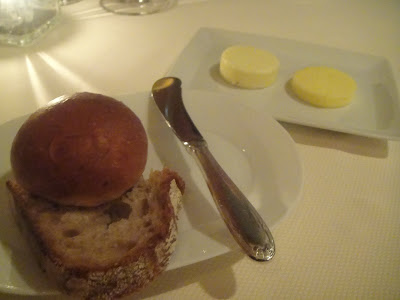 Fresh, warm bread with a choice of bacon and sourdough, served with both Vermont salted butter and unsalted butter.
The bacon bread was delicious. It was actually airier and less dense than the one at Providence. 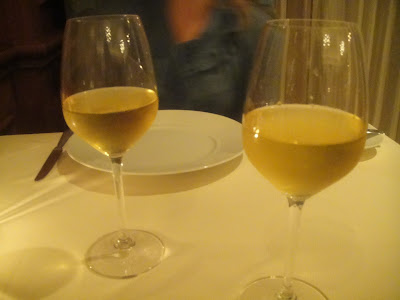 Naturally I wanted to get the wine pairing but since I had to do some work after dinner, I refrained. Instead, we ordered two glasses of Pinot Gris. 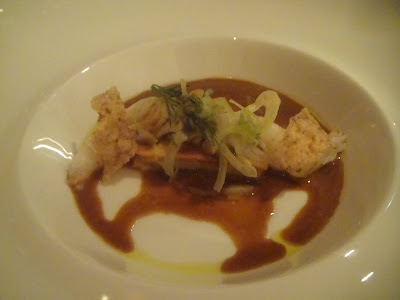 Langoustines with young fennel, porcini mushroom lasagna
This was one of my favorite dishes because the broth had an intense seafood essence and the mushrooms added richness to the sweet langoustines. 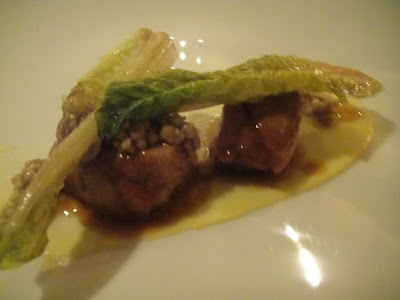 Veal sweetbreads with green olive, lemon and romaine lettuce
We commented to ourselves how the sweetbreads were cooked perfectly with a bit of salt coating the breading and drizzled with the tart lemon dressing. 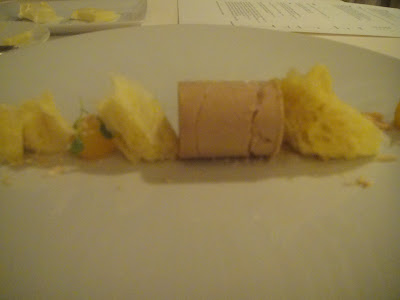 Foie gras with apple, saffron, marcona almonds and brioche
This is 100% foie, no additives. Absolutely rich and delicious and was a perfect portion to share between two people. The salt and apple sauce on the plate went really well with the foie. The flavors really worked together. I thought the brioche was a nice touch as it was aerated, so no yeast and the chef pops it in the microwave for just a tad so that it rises just a bit. 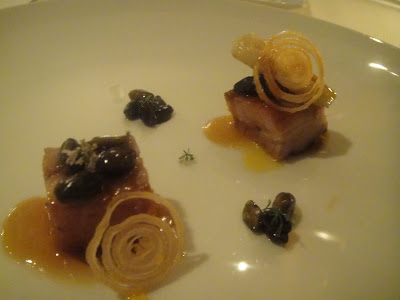 Kurobuta Pork belly with pistachio beans, tiny onions, OJ and coriander
Gorgeous presentation. The pork belly was sou vide with duck fat and thyme. How can you go wrong with that?!? I loved the texture of the pork belly and the sweet glaze on the meat. This reminded me of Chinese BBQ pork. 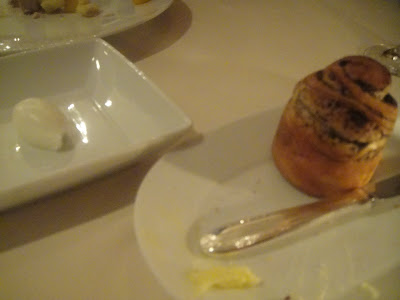 Just as we were about to ask for more bread, our server came by to offer us truffle brioche which was made in house. In fact, Michael Voltaggio does not use anything from the restaurant kitchen. He makes his own stock and bread so you won't see room service food on your table. The bread was very light and you could definitely see the specks of truffle in the bread and taste its heavenly flavors. The brioche was served with goats milk butter which was mild. 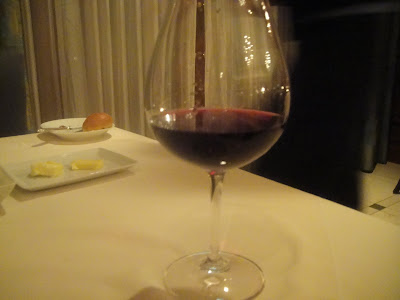 Glass of red for the meat dishes ahead. 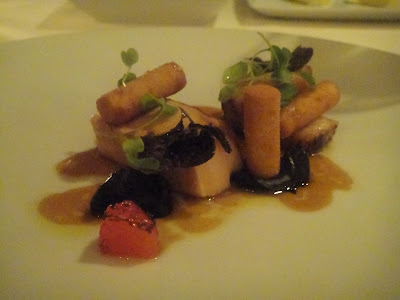 Four Story Hills Poularde with Perigord Truffles, Panisse and grapefruit
Poulard is a a hen that is spayed for fattening. I just HAD to get it to see if he could possible make chicken breast tender. The answer is Yes! The chicken was cooked perfectly and garnished with truffles, Periogord no less. There was a puree of it under the chicken that was delicious. The plating of the dish was great as well with the grapefruit chunks adding some color. 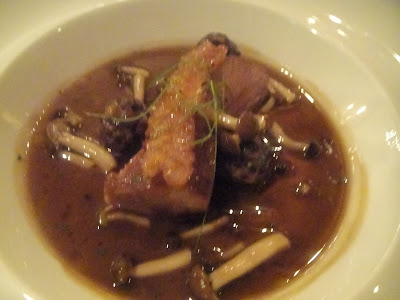 Veal cheek with lentils, bacon and Hon Shimeji
The veal cheek as expected was gloriously tender. The broth was flavorful and smelt amazing immediately when the plate was set on the table. There was also a caramelized (either) bacon/prosciutto on top of the veal cheek that was a lovely sweet crunch. 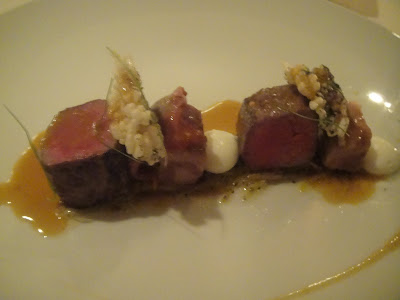 Jameson Farm Lamb with Vadouvan, Nori-spaghetti squash, yogurt and fried rice
I feel like I am a broken record when I say again, that the meat was absolutely tender. Sou vide which explains the smooth texture of the meat. It was cooked perfectly and red in the center. The yogurt reminded us of the mozzarella and tomato dish at The Bazaar as it popped in your mouth and was soft and oozing in the center. The spaghetti squash was seasoned well. It was interesting that "fried rice" really meant fried rice cakes, thankfully not stir fried rice. It was seasoned with the same spices you would find at an Indian restaurant. 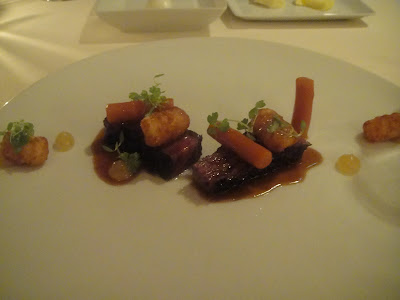 Wagyu short ribs with smoked tater tots, nantes carrots and white ketchup
Fatty, tender pieces of short ribs that melt in your mouth. The short ribs were sou vide for 48 hours, then glazed with sweet white ketchup. I was in heaven at this point. I even loved the sweet little dollops on the plate and the microgreens on top of the short ribs. 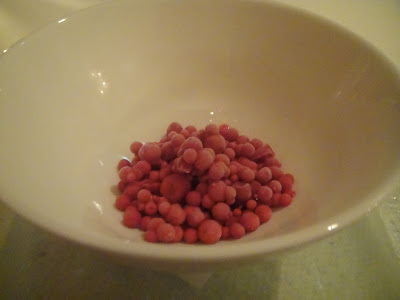 Palate cleanser of raspberry and yuzu.
Our waiter told us that the chef played around with various combinations such as peanut butter but this was the most well received. I can see why, because it was refreshing and really did the job of cleansing your palate. The raspberries liquids were dropped into liquid nitrogen and looked like dippin Dots. The texture was in between that of ice and ice cream. 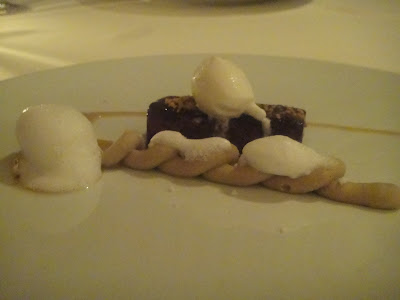 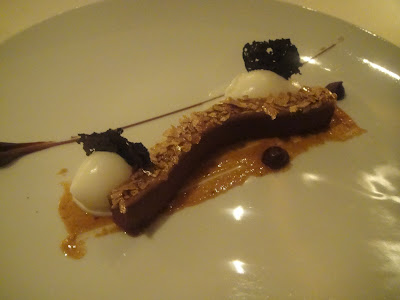 Fools Gold with chocolate, salty Hazelnut praline and and milk sorbet
Very rich chocolate which went well with the sweet and salty toppings. 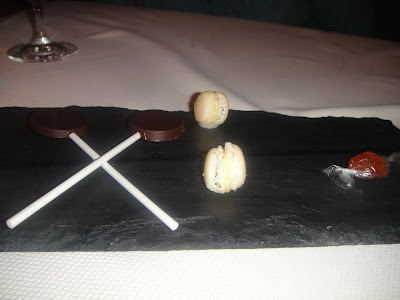 If toffee pudding and chocolate and chocolate wasn't enough, we ended the meal with petit fours.
Passion fruit sweets wrapped in edible wrapper which dissolved in your mouth (nice touch!!), macaroons and chocolate on a stick. The chocolate sticks were amazing because shh.... it's actually mixed with poprocks. Our waiter did not mention that to us as it's supposed to be a nice tingling surprise party in your mouth. It was a little trippy but very fun.
After dinner, we went to the kitchen to met the famous chef. I was quite surprised as he is nothing like the arrogant person on TV. Yes, he's very confident but also humble and down to earth at the same time. It was interesting to find out more about him. He liked that his restaurant was a bit inconvenient to get to because he wants people to drive out to taste HIS food, instead of dining there only because it's convenient. He likes managing a smaller kitchen. The camaraderie in the kitchen is very obvious and the waiters also seem to have a good rapport with him. Unlike on Top Chef, there are no tricks or gimmicks in his dishes. The use of molecular gastronomy is very subtle. He'll use it for a garnish on the plate instead of on the entire dish like at The Bazaar. He really IS friends with Kevin (they actually just had dinner together at Wurstkuche last week). I like that he wants to keep the prices affordable by lowering them when he first came on board. Apparently there was a couple that came in that night who was obviously on a budget because they shared the 4 course menu and did not order wine. He graciously sent out plates free of charge because he wanted them to really experience his restaurant despite their financial restraints. Doesn't that tug at your heart strings just a bit?

The service at the Langham was excellent. There were twice as many waiters to diners so service was attentive yet not imposing. The hostess walked me to the restroom, our waiter was knowledgeable and answered a lot of our questions about how the food was prepared, valet offered me a bottle of water for the road (nice touch!), valet parking was free- no kidding, at a hotel which would typically charge $12, and of course the chef was charming.

The food was top notch: I have to say that there was not one dish that I did not enjoy. The presentation was lovely and the dishes were well executed with interesting ingredients and unique preparations. In these recessionary times, you do need someone like Voltaggio who is budget conscious, passionate about cooking, ensures his guests have a great time and puts out food that is delicious and beautiful. Dinner at The Langham was a fun experience and he definitely deserved the win, in my opinion.

Isn't living in LA simply great? I really think we are fast approaching NYC in the foodie world.

Super cute site, btw. Your rating system is great and I also like the "In the pipeline" menu.

Hi catchacubinitsden, thanks so much for reading and for your comments :) I'm glad you liked the rating, my friend Josh recommended it cuz he was having trouble figuring out which meals were better than others. Agreed! We are so lucky to be living in this city - great food, great weather, beach and all