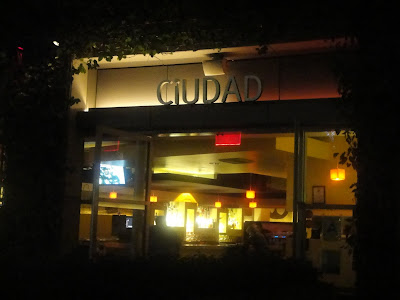 I've been meaning to hit Tuesdays Paella Night at Ciudad for a while now where $29 will get you a salad, appetizer and a choice between two types of paella. I recently noticed that Paella Night was no longer listed on their website but a quick call confirmed that they were still offering it but perhaps not for much longer. And now, you only get a salad, no appetizer and there is only one choice of paella. Guess that doesn't really constitute as "Paella Night" anymore. However they also offer a three course prix fixe (appetizer, entree and dessert) for $38.

Ciudad is located in Downtown LA. The restaurant is owned by Mary Sue Milliken and Susan Feniger, from Food Network's "Two Hot Tamales". The duo also owns Border Grill (and its truck) and Feniger opened up her own restaurant Street in Hollywood. 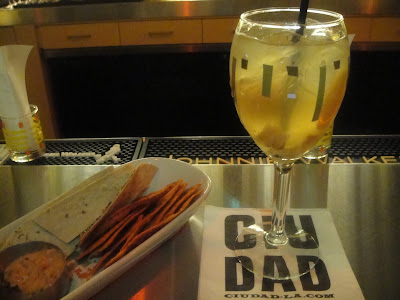 After a hard days work, we met at the bar and started with drinks. Unfortunately it was after happy hour (which ends at 7pm) so we weren't able to take advantage of discounted prices. I ordered the white sangria which was mediocre and was wasted calories. I could barely taste any alcohol (cava, in this case) and the fruits were measly pieces of pineapple and lemon. 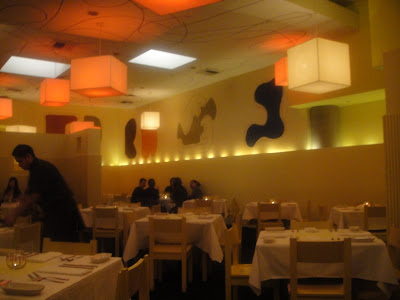 We were seated in the dining room which had colorful decor and abstract art on the walls. 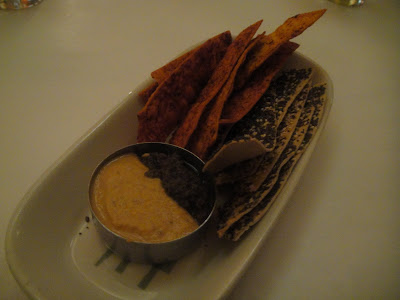 Flatbread (two types: chili powder and seeded) and a side of hummus and olive tapenade.
For dinner, we went for the paella special and the prix fixe menu. 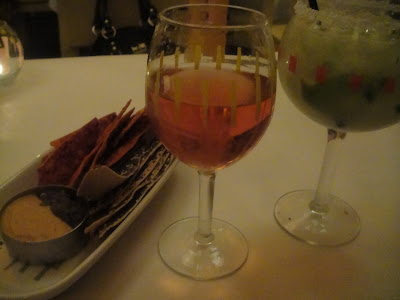 A glass of vin gris and a cucumber margarita. 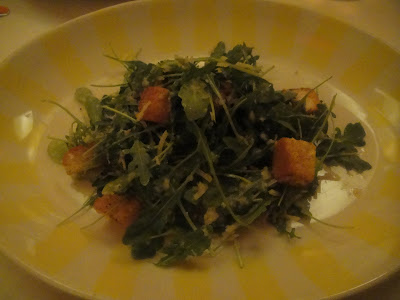 Salad which came with the paella option.
Wild arugula, tomatoes, crouton, Argentine Parmesan with lemon vinaigrette. It was fresh, simple and rather filling. Guess it's good that the paella special didn't come with an appetizer as well as salad. 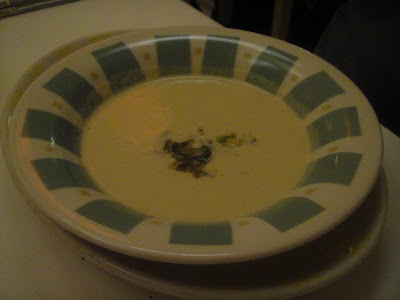 Soup of the day, described to us as clams in a vegetable broth with fennel and cumin.
Based on the description, we expected it to be more of a broth instead of cream. In any case, I liked it although it was heavier than I had hoped. The soup had a bit of a spice from the cumin. 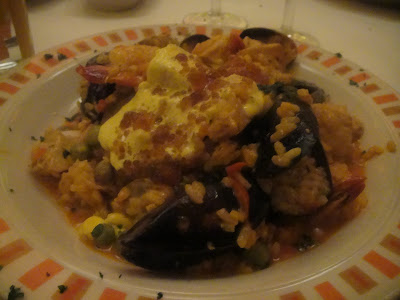 Paella Valenciana with mussels, clams, shrimp, fish and chick peas, topped with an aioli and fish roe.
The rice had good seafood flavors and the seafood was perfectly cooked. The shrimp was plump and the fish crumbled upon touch. However a big issue I had was the amount of aioli that was dumped on top of the paella. I thought it was a bit unnecessary and it added a creamy and sour taste to the paella which I did not appreciate. I literally had to scoop the top portion of the paella to set aside because the aioli was overwhelming the rest of the dish. Next time, I'd ask for it on the side. 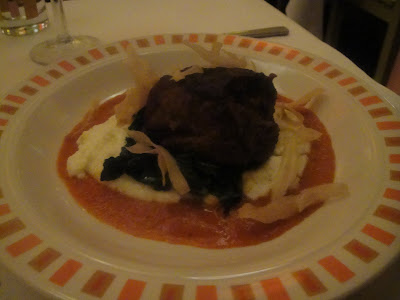 Niman ranch pork carnita with white cheddar corn grits, braised black kale, smoked tomato sauce and crispy yucca.
When our waitress set the plate down, I frowned a little. The pork looked hard like a rock. But looks sure can be deceiving because the meat turned out to the tender. The presentation was lovely and the colors were vibrant. The grits were creamy and delicious. The only critique was that the smoked tomato sauce tasted like BBQ sauce from a jar. 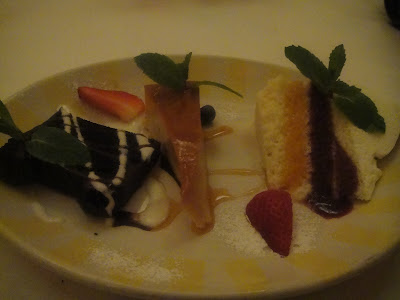 Dessert, trio of Barcelona chocolate cake, tres leches cake and goat milk Cajeta flan.
The chocolate cake was my favorite but I don't think it was anything unique. The tres leches was just alright. And since I detest goat milk, I didn't try the flan. So it does without saying that I wasn't blown away by the dessert. But I did like the concept of offering a sampling of desserts.
Overall, a decent meal. I thought the paella was good but nothing special. You can get seafood paella anywhere and that aioli sauce really ruined it. It is a pity that the Paella Night is no longer because apparently their paella options used to be so much more interesting and unique, including duck and wild mushroom, paella negra and rabbit varieties. Our waitress was very friendly however service was a bit slow. We waited over 20 minutes between courses and also had to wait 15 minutes for a drink which apparently had been forgotten. The prices were pretty reasonable for an upscale Latin joint. However now that I've tried it, I can cross it off the list and don't think I'd be motivated to make the drive to Downtown during after-work traffic for another go at this.