A New York kindda night with The Bowery and Vampire

Besides eating out, my other favorite hobby is attending concerts. I was catching New York indie band Vampire Weekend at the Music Box at the Henry Fonda Theatre in Hollywood and decided to make it a dinner and concert night. We initially decided on Blue Palms Brew House which is attached to the Music Box however since it was $4 beer pint night, the place was packed. Instead we decided to walk a couple blocks to The Bowery. What a perfect pre-concert choice because The Bowery is an upscale yet casual Manhattan-style bar in Hollywood. 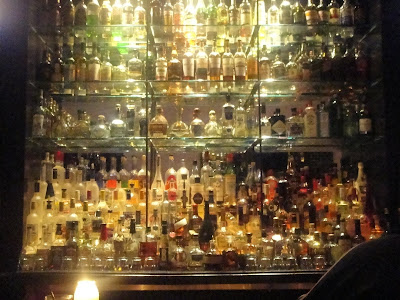 It's dark inside and a bit warm as the ceiling fans looked like they were just for decorational purposes. The bar does feel like it would belong in Lower Manhattan. The place was decorated with subway tiled walls and tin ceilings. The music was also rocking with tunes from Vampire Weekend, Phoenix and Cold War Kids.

The Bowery has a decent selection of beer and wine. The food menu is all American pub fare including burgers, fish and chips, ribs and salads. 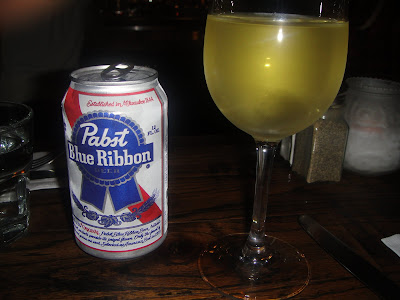 1st round of drinks: Pinot Blanc and PBR.
Since their blackboard was written with the slogan "still LA's best burger", we decided to try it. I liked that they offered quite a few topping options. Fried egg? Hello, I'm so there! The patty was grilled sirloin and served on a toasted English muffin instead of a bun. 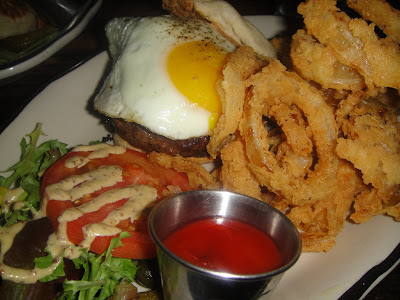 Bowery burger
Our waiter asked how we wanted our burger cooked. Medium rare we said, however the burger was more on the medium side. I didn't think the patty was "LA's best". It was a bit dry, not juicy and perhaps a bit overdone. Love the toppings though. Fried egg on a burger is always a nice welcome. I also ordered sauteed mushrooms which were tasty. $3 will get you a side of fries, onion rings, mash potatoes or veggies. The onion rings were buttermilk battered: good but a bit greasy. 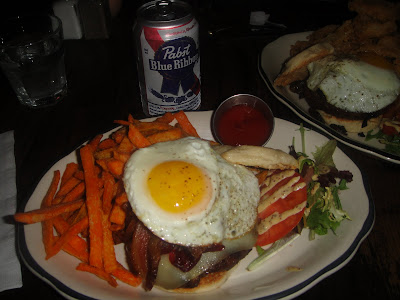 Burger with bacon, fried egg, confit red onions and cheese.
The red onions were sweet and tasty. The maple bacon also added another layer of sweetness. I did like the use of English muffin as opposed to a bun as the latter can tend to be dry or bland. The sweet potato fries were perfectly fried and not oily.

After another round of drinks, we made our way to the Music Box. The Fonda is a historical landmark with retro (and a bit kitschy) decor. Charming although it smelt a bit stuffy. 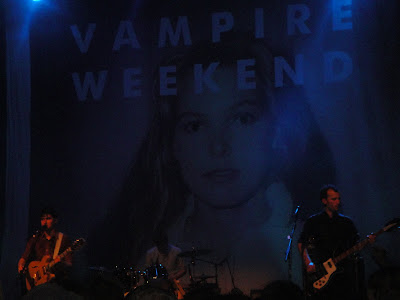 The band was amazing, as expected. They were energetic and excited because their new album was released that day.

The Bowery was the good choice before a Vampire Weekend concert, making it a fun New York themed night. The bar is casual and the food and beer selection was good. The only complaint I had was that they advertised that they were "still LA's best burgers", however I didn't think the burger was anything special. Yes, the toppings were great, but the patty itself wasn't juicy enough. It's a decent burger but it wasn't the best, that's for sure. The service was a bit spotty. We asked what the hop rod rye beer was like (it was one of the few beers featured on the board) but no one had even tasted it. Additionally since it was a bottled beer, they could not offer a sample. Somehow I think a cool Manhattan bartender would have tasted the beer specials. But then again, we're in LA...