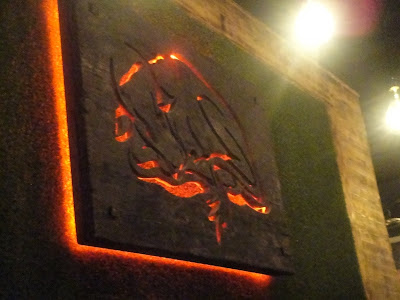 The Lazy Ox Canteen is a new gastropub located in Little Tokyo, Downtown LA, brought to you by chef Josef Centeno of Opus. It's pitched as that casual neighborhood joint with a sophisticated yet affordable food menu. The word canteen reminds me of school because that's what we called our cafeteria. Like my grade school cafeteria, Lazy Ox is small, casual, comfortable, loud and most importantly, a place where you can gather with friends for a good meal and conversation (my school canteen actually offered pretty darn good food). 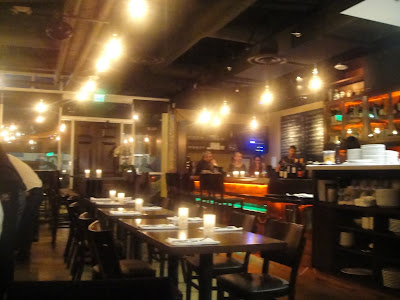 The space is small so I'm glad they took reservations. The place was fairly packed when we first arrived. Love the open kitchen and the trendy, bustling vibe of the restaurant. I was also head bobbing to the tunes they were playing which included Coldplay, The Verve and Lou Reed's Satellite of Love. 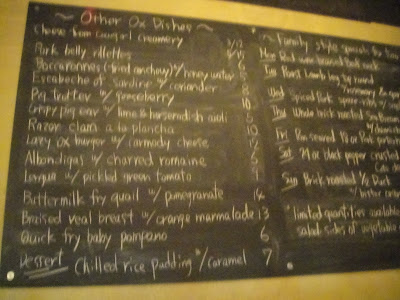 The menu has a number of small plates and a few entrees, with a wide selection of items priced under $10 and even some as low as $4-5. The menu included pasta, salads, steak and fish. What was noticeably missing from the menu was ox but there were many tempting pork dishes. In addition to the regular menu, they post specials on the board which change often so unfortunately they were not serving the oxtail pappardelle or pork belly skewers that night. As I scanned the blackboard and menu, I was overcome with excitement. This is exactly the kind of food I'd like to consume with a good glass of wine. 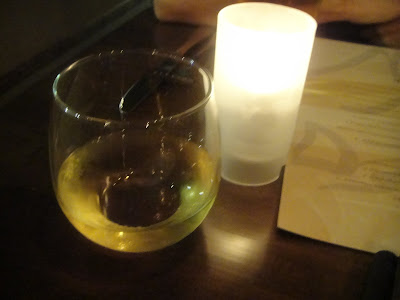 We started with drinks. They have about over twenty beers, half of which are on tap. I ordered a canteen white Semler from Saddle Rock, Malibu to support a friend and local wine production. Nice stemware.

The entrees looked heavy so we decided to order a few small plates to share between the two of us. 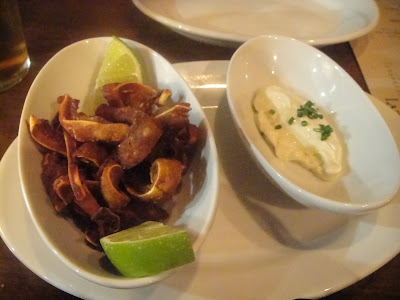 Crispy pigs ear with lime and horseradish aioli
For $5, I'd love to make this a part of my regular diet. I thought the citrus from the lime worked really well with the fried pigs ear. The horseradish aioli wasn't strong and overpowering. The pigs ear was crispy and chewy but soft and buttery inside. Although it (and nowhere else can) compare to the pigs ear at Church and State, I thought that Lazy Ox's version was notably better than the other ones I've tried, including at Animal and FIG. Animal's and FIG's seemed to be just crunchy all around without the contrast of the soft and mushy center. 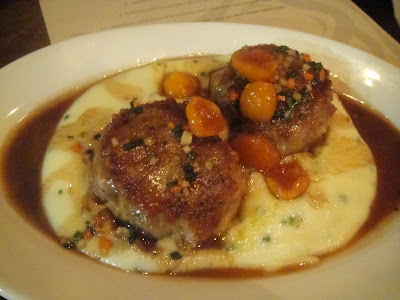 Pig trotter and gooseberry, mash potatoes and wine sauce
OMG, this was one amazing dish. The pig trotter was shaped into a cake and breaded. The meat itself was rich and buttery and reminded me of the mouth-watering pied de cochon I had at yes, once again, Church and State. The mash potatoes were creamy and buttery and added another layer of decadence. 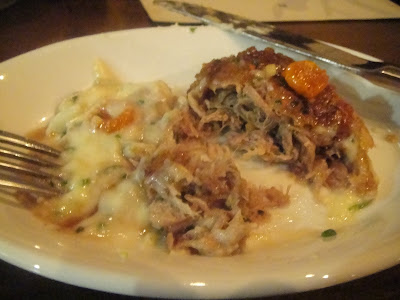 Don't be scared of pig trotter, it's not gross. See the inside of the breaded cake, the trotter looks exactly like shredded/pulled pork but more tender and delicious. 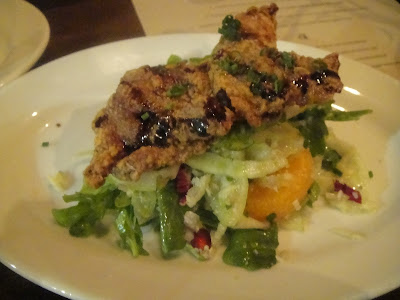 Buttermilk fry Quail with pomegranate
The quail was tender and the breading was not greasy. Perfectly done. I liked the citrus salad which was refreshing from the mandarin orange segments and apple slice. The quail was drizzled with molasses so there was a nice sweet and acid contrast. 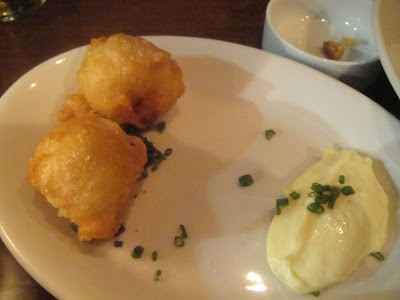 Cod brandade fritters with yuzu aioli
I really enjoyed this, in fact I preferred this to the one at Church and State because you could actually taste the cod and it was of good quality. The inside of the fritters was soft and airy, and the batter was reminiscent of Fish and Chips. 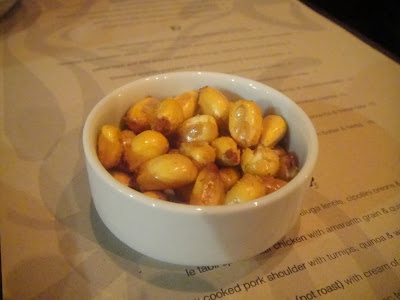 Cancha. Crunchy nuts, seasoned with lime salt, which is very popular in Peru and Ecuador.
Apparently this was supposed to be an amuse bouche or starter but they had forgotten to serve it to us. They only brought it over when we were on our last plate. Better late than never but the table beside us did not even receive this. I liked the crunch and tart flavor from the lime. Wonder if I can buy this in bulk and serve it for Superbowl; I'm sure it'd be a hit. 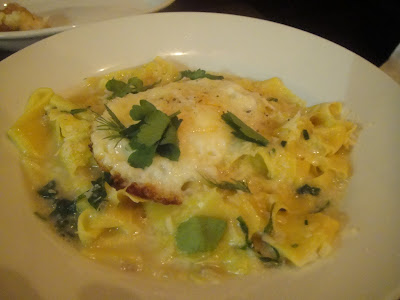 Hand torn Pasta with sunny side egg, brown butter and citrus vinegar
Sunny side eggs are my favorite- I am a runny yolk lover. This dish sounded so rich, flavorful and promising. Unfortunately, it turned out to be lighter than I had hoped. The sauce was a bit watery and I thought the dish needed a bit more seasoning. Perhaps the sauce needed to be a bit thicker and have more substance because it did not hold well with the soft pasta. Despite it all, I still enjoyed it. If I had ordered salad and ended on this, I might not have been happy but because we had an array of dishes with heavy bold flavors, I wasn't bothered that this dish was milder than expected.

I really liked The Lazy Ox Canteen. It reminded me of Church and State, not only because it's located in Downtown, but also because the menu boasts a lot of really good small plates, the food was well executed, flavorful, hearty yet delicate, prices were very reasonable for the quality, and the restaurant has a warm and casual feel to it. We chatted with the couple beside us at length and traded dining stories. That's the type of energy that The Lazy Ox exudes. It truly is that neighborhood joint.

I gotta go back for the pig trotter/pig ear/fried quail. The cod brandade was indeed mighty fine, ditto to the rillettes I had. Good times.

Sinosoul, glad you enjoyed it there too! Definitely get the trotter.