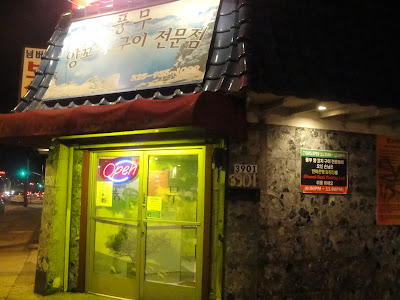 When I read online on blogs and the LA Times that there was a restaurant in Koreatown that specializes in meat (yay for meat) skewers (love yakitori) and also serves ahem... bulls penis on a stick. I have to admit, I was intrigued. Pork belly and pig's ears are so 2009. I knew I could get a group of six adventurous friends to check it out. Feng Mao is a Korean Chinese joint that not only offers grilled meats but also cooked Chinese dishes, which is great for friends who are afraid to sample the offal skewers. 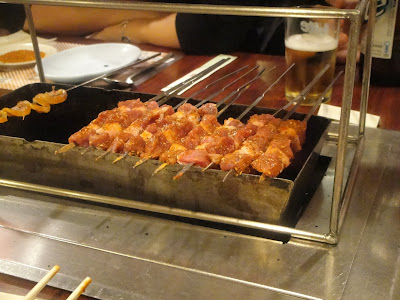 I liked how the skewers are the metal kind, not the flimsy wood ones that could potentially char up. Its DIY but the lady will help you if you don't know how to cook it. There is some procedure that goes into cooking. She used the bottom tier to cook the meat and turns the skewers from time to time, then moves them to the top tier to finish up. Thank goodness we had her to cook for us as I would have hated it if we had overcooked the meats. 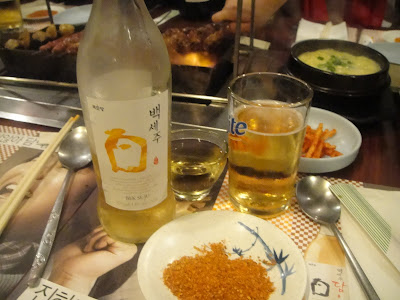 Beer and ginseng wine. The wine was very sweet in a bad way (I cringed after my first taste), but after a feel glasses, you won't even notice. 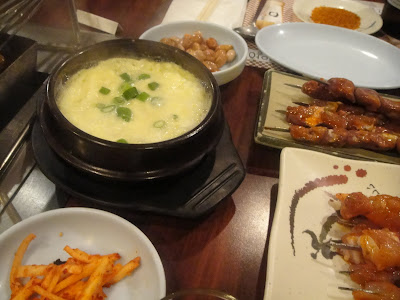 They brought over an array of banchan consisting of egg custard, boiled peanuts, radish and some meat that tasted a bit like jerky. 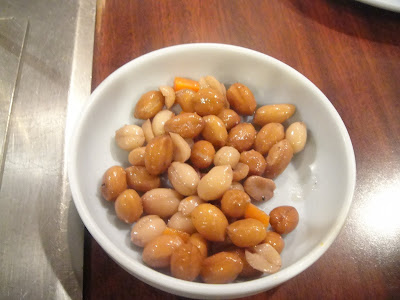 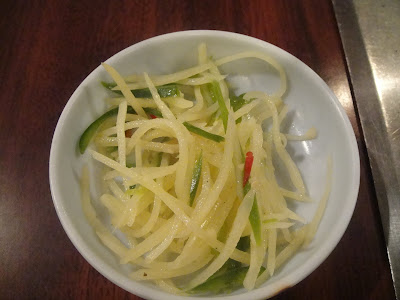 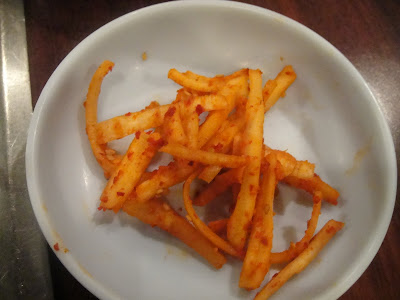 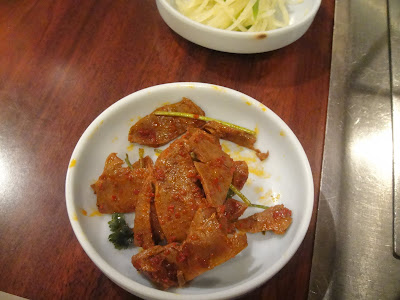 Nothing special about the banchan. Wish they had more items such as kimchee and jap chae but you can't complain because it's free. 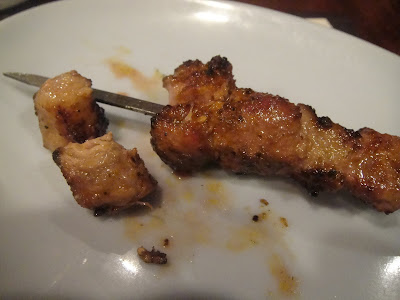 Mutton kebab (10 sticks per order)
I've had mutton many times growing up (it's common in Indian cuisine) but usually it has to be stewed to death so that it becomes tender. I was surprised that the mutton kebabs were not only well seasoned with chile and cumin, but were also very tender. Yes it still has a little gamy taste but not overly. 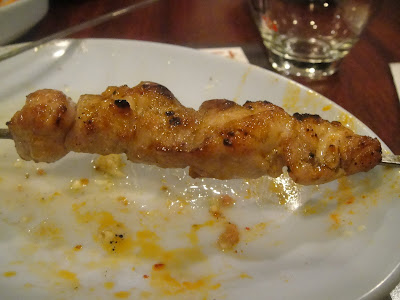 Chicken (10 sticks per order)
Chicken usually sounds boring to me, but this was possibly one of my favorites of the night. Extremely tender and succulent. 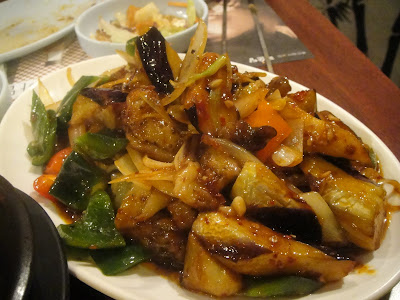 Spicy eggplant, similar to the kind you could find in Chinese restaurants. The eggplant was cooked perfectly, a bit on the softer side. 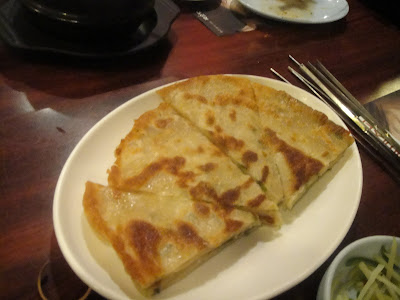 The scallion pancakes were a bit thicker than some of the better ones I've had but it was still good in my books. Served with a spicy dipping sauce. 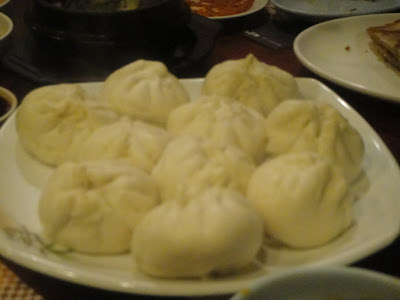 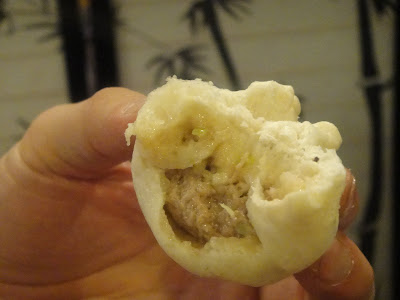 The filling tasted like that of a XLB but the wrapper was more like a char siew bao. Personally, I prefer the delicate, thinner XLB skin as this version was too filling. Why fill up on starch when you have organ meats awaiting you.

Now, on to the good stuff. You knew I wouldn't just come here for chicken and dumplings. 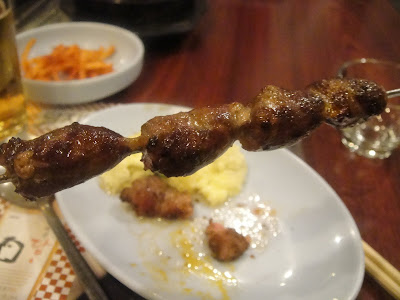 Chicken hearts (5 sticks per order)
Chewy as expected and you can definitely tell it's the heart. Although I enjoyed this, I think I prefer the simpler seasoning at Yakitoria on Sawtelle. 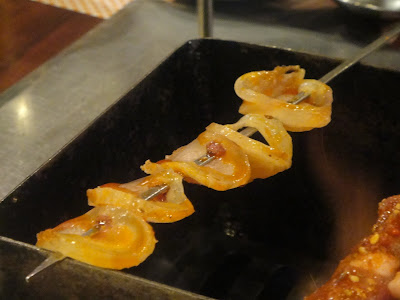 The star of the night, the bulls penis. One order is only a stick (I guess they figure you don't need 10 sticks of this). 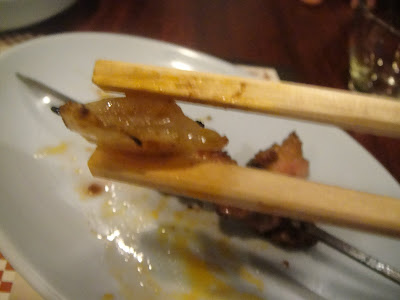 Honestly I was a bit disappointed with this skewer, we all were. Not to sounds crass, but I was expecting a schlong, not something that was sliced thin and translucent. The pieces were tiny and definitely didn't feel like the "star" of the night. It tasted like cartilage which is not a bad thing, but I suppose we were expecting something similar in texture to gizzard or heart, and the size of a johnsonville.

I'm still glad we got to try it; this is the type of thing that you see on TV and wonder what it would be like. It's not scary. It chewy and barely tastes of anything. The best part was that we were acting like little kids at the table making stupid jokes all night. It'll continue to be funny for a couple more days. 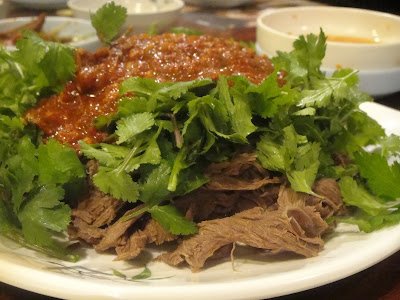 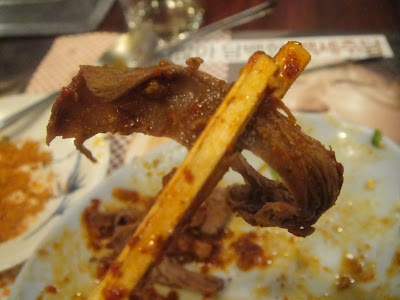 Our waitress said that it was pigs heart but it didn't taste like that at all. Perhaps there was some communication breakdown, which is very likely. Half of a piece that I examined looked like brisket because it was shredded, while the other half had a muscular texture which could very well have been heart. The meat was also smothered with a spicy sauce that overpowered everything. The dish was interesting but I wouldn't bother ordering it again.

It was a fun night for us, although not as adventurous as we had hoped. However, even though the bulls penis didn't live up to our expectations, I still really enjoyed it and the other kebabs that we ordered. The bill was $20 each which is always a nice thing. In a town that is filled with Korean BBQ joints, Feng Mao is a interesting alternative. And there really is something for everyone so don't be scared if you're not a .... alright, I'll stop...

how AWESOME are you? Between the 2 of us, la.digesty.com is serving up 2 orders of penis today. That's about 1000% more penii than normal.

great to meet you and amy last night at the lazy ox. here is the link to garlic and saphires from ms. reichl. http://www.ruthreichl.com/?ID=2. will send you the french laundry review from home. enjoy! ron

Hi Ron - great to meet you both and thanks for the link! I'm glad you enjoyed your meal because I did too! Going to put Wood Spoon on my list as well. My email address is stuffycheaks@gmail.com.

Nice review and pix! I'll have to go back for the chicken.