The Simpsons is one of those shows that I never think to watch but every time I stumble upon an episode, I enjoy it and wonder why I don't watch it more often. Bandera is my restaurant equivalent of The Simpsons. Whenever anyone asks for restaurant suggestions, I always forget to mention it. Yet I have always enjoyed every meal and vow to return sooner than later, but quickly forget. Perhaps it's because I'm always on the lookout for new places to try instead of my neighborhood joint. Bandera is owned by the Hillstone group (Houston's, Gulfstream, R+D Kitchen) and is the upscale chain of the lot. The menu is relatively similar to sister restaurant Houston's and focuses on American fare with good steak, ribs and fish selections. And the best part is, there's no corkage. 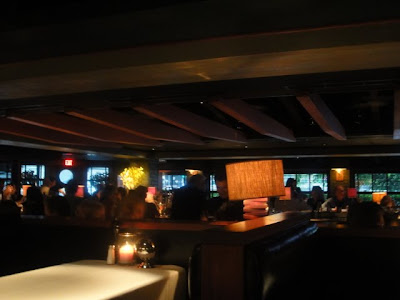 Bandera is always crowded and waits can be up to an hour. Few people know that you can make reservations (oops, maybe I should keep this to myself...) because Houston's doesn't take reservations. If you forget to make a reservation or if you're at Bandera at a whim, it's still fun to grab a seat at their wraparound bar which is a great spot for people-watching. The clientele is older, sophisticated Brentwood crowd but I did see Josh Duhamel sitting at the bar once, waiting for his takeout order. *swoon* It's dimly lit inside with dark wood interior and wood beam ceilings. They have a pianist and live jazz playing on most nights. 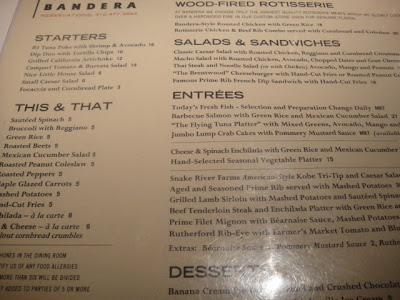 Their menu focuses on rotisseries and grills and entrees are not that cheap and will run you in the high twenties to mid thirties. It's pretty tough to make a decision because I have so many favorites. I like their french dip, ribs, and their prime rib which is cooked perfectly but MASSIVE. Of course, I can never stray from my favorite dish, the BBQ beef ribs ($28). It's not listed on the menu but they always offer it. 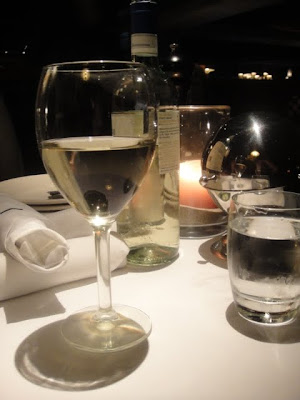 BYOB and no corkage. Love it! 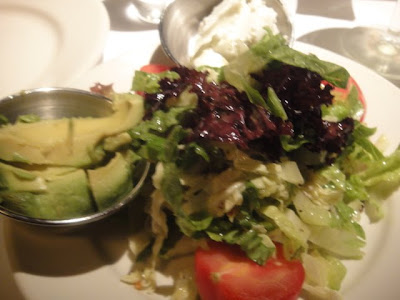 Nice Little salad was a simple salad that was dressed with citrus vinaigrette and topped with avocado, tomatoes and goat cheese. It really is a little side salad and resulted in only a couple leaves between the three of us. I enjoyed the dressing which was made in-house, and was light and refreshing. The croutons were made with cornbread so it added a sweetness to the salad. 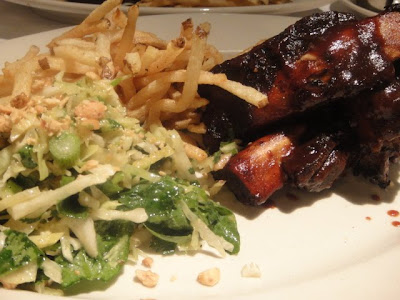 BBQ beef ribs, we ordered two to split between three of us
While Houston's offers pork ribs (which are tender and delicious), Bandera offers beef ribs. I typically prefer pork over beef ribs because the latter can tend to be tough, but Bandera does a great job with it. The meat was luscious with fatty pieces still attached. It literally fell off the bone, breaking into pieces when your fork scraped it ever so slightly. The meat was basted with a nice coating of BBQ sauce. There were about 4 ribs in each serving which doesn't sound quite filling but it was sufficient since the meat was heavy. The cole slaw wasn't your typical generic mix of mayo. It was more of a crunchy cabbage and peanut salad. And those fries are always good. Skinny and perfectly salted. 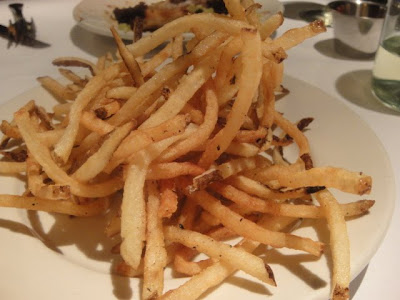 We had to order another side of fries because they were gone in seconds (my fault).

The downside of a busy restaurant is that they try to hurry you out the door. When we were done with dinner and were still finishing up our wine, our waiter had already cleared our water glasses (no refills? I was parched) and on numerous occasions, someone came to clear off crumbs on the table. Basically trying to tell us "time's up, we need your table". This wasn't the first time that it's happened. Quite a poor way to communicate that they need our table. A simple "Sorry, but would you mind finishing up your wine at the bar?" would suffice. And we were only there for 1.5hr, a short amount of time for a meal. Usually service issues can leave a bad impression but I thought the food made up for it. I just can't get enough of those ribs and fries. And the best part is, because there wasn't a corkage fee, our bill came up to about $30 each including tax and tip. Bandera has to be added back on my list.

Hits: food, no corkage
Misses: rushing you out of the restaurant, busy
Rating: ***1/2

Is this the same Bandera in CDM?

Those fries look suspiciously similiar to the ones at their sister resto R+D! Corporate fries, perhaps?

Either way, they're tasty taters!

mmm...fries and bbq. the best kind of eats. too bad they shooed you guys out so fast, but byob w/o corkage fee probably brings you right back.

Josh Duhamel sighting should be added to "Hits" because that is enough for me to be there every night with hopes high of a repeat!

Anna - Yes, i think it is the same. Have you been? I know its chainy but i really like the food

Diana - As long as corporate fries are delicious, I don't mind.

bagnatic - yeah normally id be more peeved about the rush service but the food and BYOB trumps!

catchacubinitsdens - lol, yes I did look out for him everytime I went after that, but sigh.. he's like a unicorn. He appears only rarely.