Bistro LQ - So many choices, so little stomach space 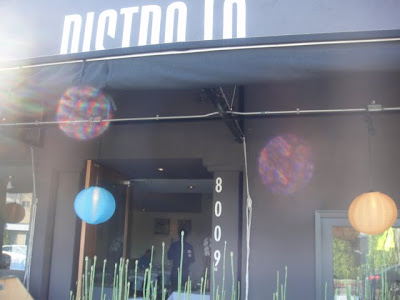 As I walked into Bistro LQ, I was a bit surprised. It was more modern, more casual than I had expected. Contemporary art on the wall, colorful lanterns in the patio, simple table setting with orchid arrangement, The Doors' album playing all night and waiters in skinny jeans and sneakers. This is, after all, Laurent Quenioux's restaurant. He opened 7th Street Bistro in downtown and Bistro K in Pasadena (both now shuttered). He's the master of game, offal and French cooking from the Loire Valley. Bistro LQ is the place I've been wanting to check out for a loooong time but some how never got to it. Thanks to Blackboard Eats for their 30% discount which got me to get off my heinie and make a reservation. 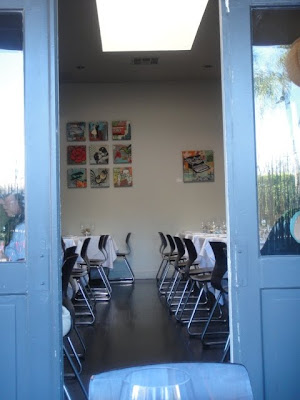 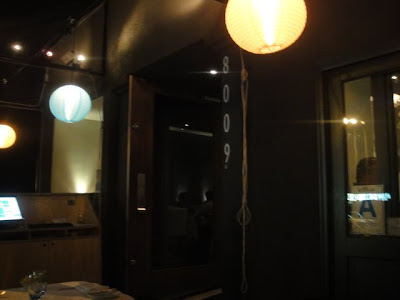 We were seated in the patio because it was a nice warm LA summer night. I didn't have to look at the menu because I'd been studying it for weeks. 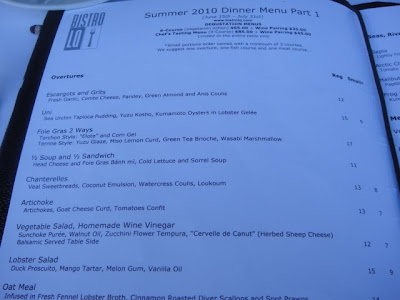 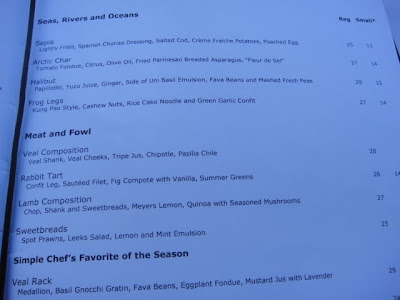 They offer a 6 or 9 course tasting menu (vegetarian option as well) which is quite affordable at $65 and $85 respectively. Some of their dishes are also offered in half portions which is great if you'd like to sample many dishes. Unfortunately, BBE discount did not cover the tasting menu or half portions. Our waiter recommended that we order one starter and entree per person. It was an extremely tough decision because there were so many exciting dishes on the menu such as uni tapioca pudding, foie gras 2 ways, sweetbreads, sepia, frogs legs, rabbit tart, duck 2 ways.. you catch my drift??? We decided to go for 3 starters and 2 entrees to split between the two of us. 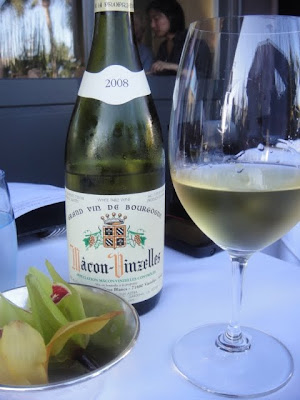 We ordered a bottle of Chardonnay from Burgundy. The wines were reasonably priced and there were many bottles in the $40s. 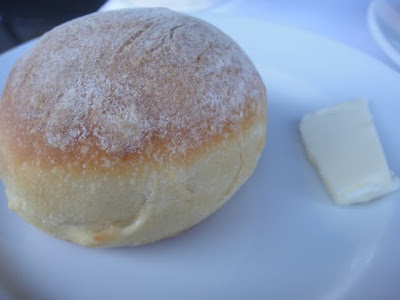 Fresh warm bread with soft butter. I did good! I only had one since we had a large meal ahead of us. 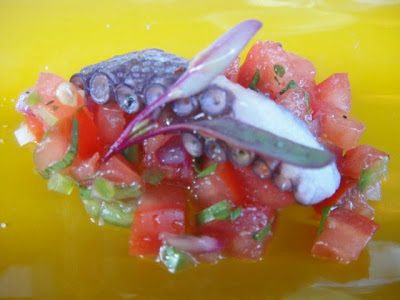 Amuse bouche- Octopus with pico de gallo and red wine vinegar
Octopus was cooked well and properly seasoned, and I enjoyed the sharp flavor of the diced onions. 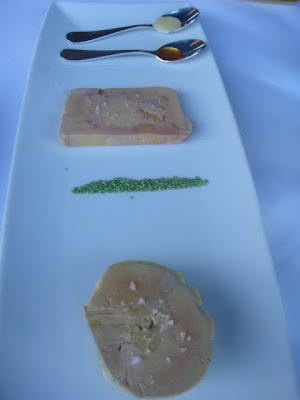 Foie Gras 2 ways
Torchon: 'Elote" and Corn Gel
Terrine: Yzu Glaze, Miso Lemon Curd, Green Tea Brioche, Wasabi Marshmallow
I can't never say anything bad about foie. I enjoyed the torchon of foie that sat on a bed of cut baby corn and with sea salt sprinkled on top. The terrine went well with the citrus from the lemon curd. I didn't see the green tea brioche though but it's OK- I didn't want to fill up on too much carbs. In the center of the plate were spicy seeds, too small to be pepitas so I'm not sure what they were but I liked the spiciness with the foie. Often times, foie is paired with a sweet compote so this was a nice variation. 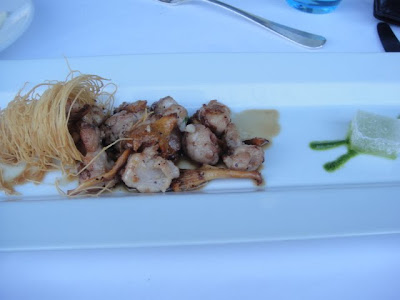 Chanterelles
Veal Sweetbreads, Coconut Emulsion, Watercress Coulis, loukoum
The sweetbreads were flavorful and came with a crunchy Phyllo bird's nest. My dining companion wasn't wowed by the preparation of the sweetbreads (apparently a bit too greasy) but I didn't find that to be the case. The chanterelles added an earthy flavor and the loukoum (a sort of gelee) had an intense lime flavor. 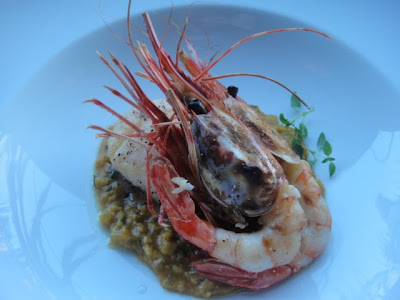 Oat Meal
Infused in Fresh Fennel Lobster Broth, Cinnamon Roasted Diver Scallops and Spot Prawns
I was glad to see that the shrimp came with its head on. I wouldn't have expected any less from Quenioux. I tried unsuccessfully to scoop out as much of the prawn brains as I could. It was damn rich. The scallops were cooked with a slight pink in the center. I liked the oat meal which had a creaminess to it and was a cross between polenta and grits. 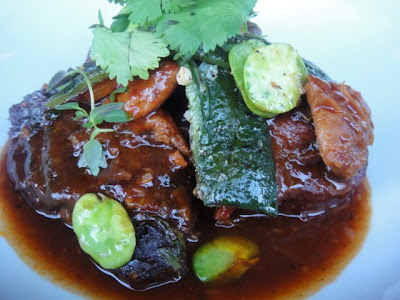 Veal Composition
Veal Short Ribs, Veal Cheeks, Tripe Jus, Chipotle, Pasilla Chile
The veal cheeks were tender but the short ribs surprisingly weren't. It was a bit stringy and bordering dry. The sauce had really deep, rich flavors. The spicy chile is something that you don't see often, paired with veal in the French cuisine but it seemed to work. 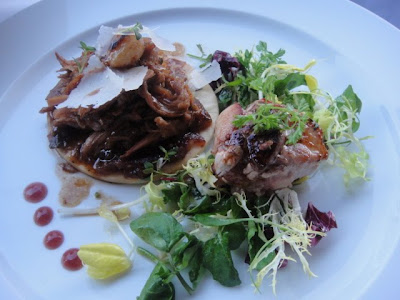 Rabbit Tart
Confit Leg, Sautéed Filet, Fig Compote with Vanilla, Summer Greens
One of my favorites of the night. This was a duo of rabbit with the confit sitting on a pastry tart, and the filet on a bed of greens. After all the meat that we had consumed, the greens which were lighty dressed with citrus dressing was a nice welcome. The confit was tender and perfectly paired with sweet fig compote and buttery, crumbly tart. I was pleased when I stumbled upon a piece of rabbit liver while I was sampling the filet portion of the dish. It was a wonderful surprise. 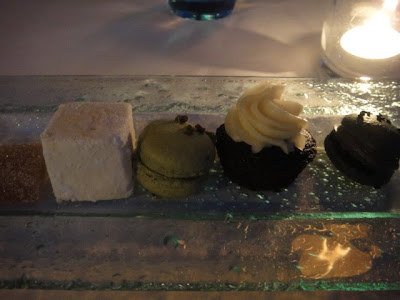 We were too full to order dessert so our waiter brought over Petit Fours which included pistachio macaron, sesame macaron, red velvet cake, marshmallow and prickly pear loukoum. I love petit fours. Sometimes, a whole dessert is too much but you do need something sweet to end the night.

Service was a bit slow with long waits between courses. In fact, our neighbors had to tell the waiter to hurry up because they had tickets to a show. But all in all, I really enjoyed my meal at Bistro LQ. BBE rules, again! The bill went from almost $200 (excluding tip) to about $120. Where can I buy shares in BBE? I'm not joking! I enjoyed the food as well. There were so many exciting choices on the menu. The selection of offal is heaven to me. I mean, have you ever seen sweetbreads four times on the menu? This is definitely my kind of place.

I was there, too! Go look at your tweets!

Let's eat together some time...at the same table! :D

Everything looks so delicious, especially the foie gras (reminds me of the foie gras mousse at Waterloo & City). I have the BBE discount but it expires soon...I hope I can make it! $120 for that meal with wine is such a great deal.

what a lovely meal! Maybe I should pop my foie cherry here?

we ate the entire overtures menu last night, then went to polish out a 10 item cheese plate, then had the petit fours to go with the madelines with the coffee. Sufficed, I'm still freakin' full.

Service was impeccable; the French dudes so FUCKING FASHIONABLE and hot. My daughter is marrying a French Jew. That's all I know.

weezermonkey - hahah sigh.. I've been a bit better at the tweets now because I now have it on my phone yay! baby steps.

Daniel - hope you made it to lq. Its definitely worth it. But thanks for reminding, I need to make another W&C trip..

Anna - DO IT!!! Their foie is really in its pure, unadulterated state. lemme know if you want company, I never get sick of foie :)

liz - I love foie too, but the best part was, there were also other things on the menu that excelled.

Sinosoul - can't wait for your entry, want to see all the other stuff I missed!! Wish I had more pple at dinner so we could have ordered MUCH more :)

I had the uni tapioca when I was there and it was amazing!

ahhh food she thought, that was on my wishlist but we had too many dishes ordered. bummer!