LA Street Food Festival: where you don't have to hunt food trucks down, they'll come to you 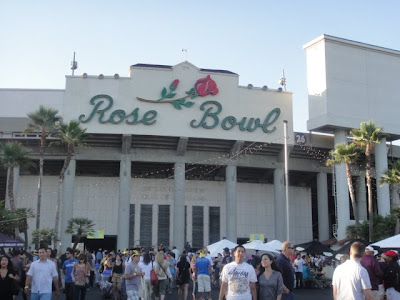 After this spring's LA Street Food Fest FAIL, I was skeptical of it's summer edition. Did I really want to wait in line with thousands of other people in the sweltering heat, only to finally bail from the event when the line wouldn't move? No thank you. But when I heard that organizers had changed the format this time round (pre-sale tickets only, larger venue @ Pasadena Rose Bowl, fewer tickets for sale), I was willing to give it a shot... but only with VIP tickets. For $20 more ($65 vs. regular admission at $45), you get access to the event 1.5 hours earlier plus front row parking. Have you been to the Bowl?!? Parking by the entrance alone is worth the extra $20.

The event was held on July 24 (thankfully a relatively cooler summer day) and saw over 60 vendors from food trucks and restaurants. The price of the ticket included all you can eat and drink, as well as musical performances from local bands. We got to the Bowl a bit later than expected. VIP started at 4pm, we were there at 4.45pm. When we whisked through the entrance, I noticed a line had already formed for regular admission, 45min before they would be let in. Yikes.

The Rose Bowl was a spacious venue for the event and it never felt too cluttered especially since the event was capped at 5000 attendees. Instead of parking the food trucks on the field, each vendor set up stands instead. Yes, it loses the aesthetics a bit, but it's more practical from a logistics perspective this way. Besides, this is a Street Food Fest, not a Food Truck Fest per se. It was fairly organized but I thought they could have hired some people that could have directed parking as we weren't sure where to go. Also, they did not offer a map so it was tough to find the stands that you really wanted to try. At an event where long lines formed quickly, it would have been beneficial if we could make a beeline for the stands that we wanted to hit up as soon as possible. I understand if they wanted to save paper, but perhaps they could have posted a map online or attached it on email so that one could access it from the phone.

This was the crowd factor during the VIP session. 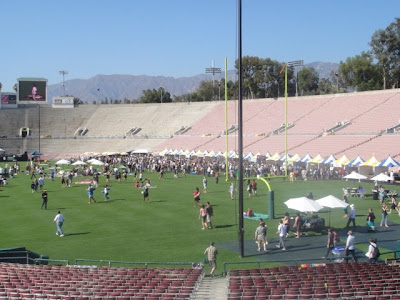 This was the crowd after the event was opened up to all participants. Now you're realizing how that $20 was so worth it, right? 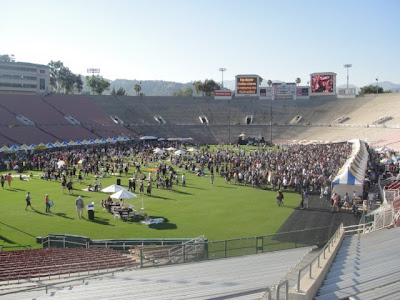 They had a Singha beer garden which essentially consisted of just a couple tables, chairs and umbrellas. The beer was light and refreshing for the sunny afternoon. They also had tequila tastings and I noticed a few Hollywood scenesters pounding shots. Too bad there wasn't any wine available. 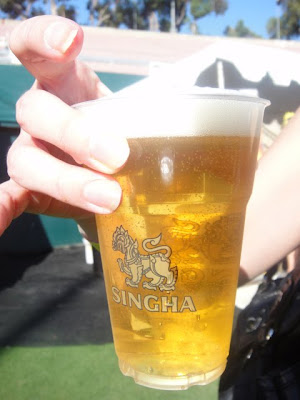 Thankfully for the VIP session, we were able to cover a lot of stalls in a short amount of time. 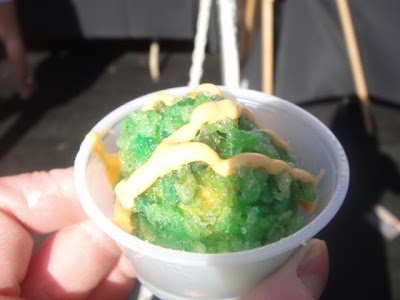 Crispy tofu balls
I was excited to try this because I've read rave reviews about Starry Kitchen. Nice crunchy coating, stuffed with tofu and corn. Very unique dish and something that quite surprised me, in a good way. 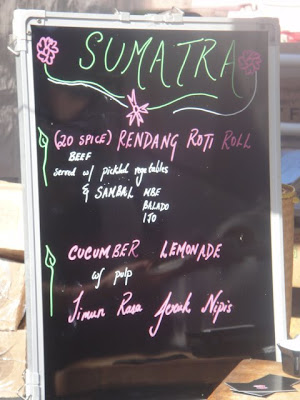 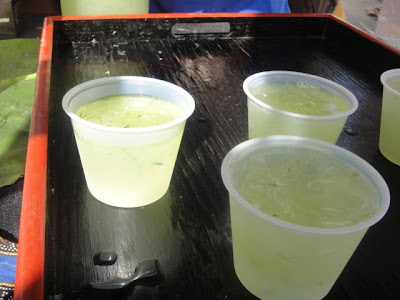 Cucumber lemonade with pulp
Refreshing, only wish there was some champagne mixed in :) 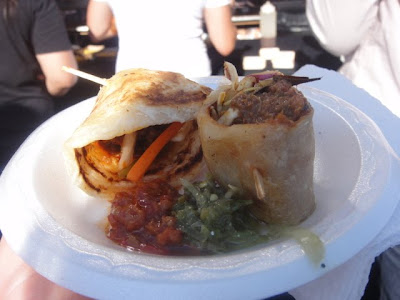 Beef rendang roti roll with pickled vegetables and sambal
As a Singaporean with a Malaysian father and a mother that cooks killer Southeast Asian food, my standards for this cuisine is pretty darn high. I have to say that LAsian Kitchen impressed. The rendang had the flavors, spice and consistency that I was familiar with. I appreciated the use of roti (which is common in Singaporean/Malaysian/Indian cuisine) as a wrap instead of something less authentic such as lettuce cups or tortilla. The roti had a nicely fried exterior and held the rendang together while absorbing the juices. 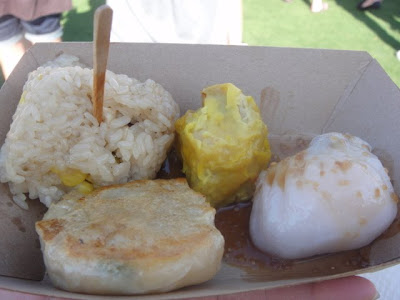 Har gow (shrimp dumpling), shu mai (pork dumpling), lotus leaf rice and potato dumpling
This was on the top of the list to try because I love dim sum and I'm one of those people. You know.. the ones that rarely get to eat dim sum because they refuse to make the drive east of the 405 on weekends? Yeah, I'm one of those. So I was excited to get my dim sum fix at this event. The shu mai was good. The har gow wrapper was a bit gummy but the shrimp was cooked well. The glutinous rice was tasty and was filled with tofu instead of the traditional pork. I saw a girl actually attempting to chew the wrapper until her friends squealed "I don't think you're supposed to eat the wrapper!" She was not Asian. I thought the potato dumpling was very interesting. The filling was soft and fluffy like mashed potatoes, and mixed with cheese and bacon. The wrapper was chewy with the texture similar to mochi which reminded me of ham sui gok, another dim sum favorite.

The only issue I had with this stand was that they had two lines offering different items which meant you had to wait in line for the regular dumplings, then wait in another line for something else. Wouldn't have been an issue if the lines were minimal, but they weren't because they were frying up the dumplings fresh. 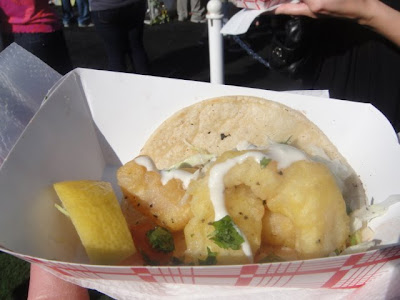 Fish taco
Nice breading on the fish taco, topped with crema and a lemon wedge. 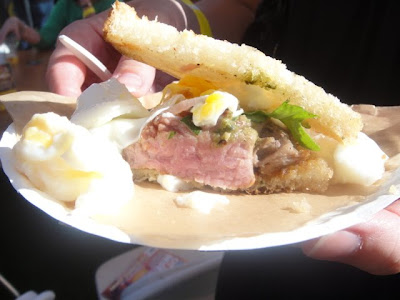 Tri tip and egg sandwich
Monsieur Egg is a push cart that serves Downtown LA with omelets and breakfast sandwiches. The sandwich sounded good on the menu but the tri tip and egg wasn't seasoned well. Egg was nicely poached though. 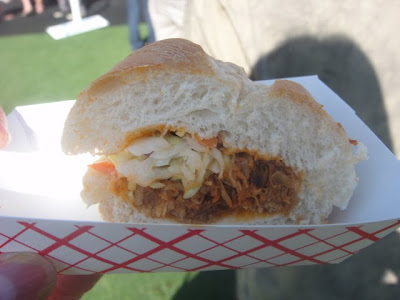 Fresh Fries
This is a vegetarian truck that offers a variety of toppings for their fries. 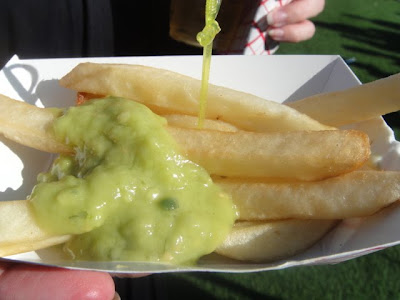 Fiesta Fries - green chile guacamole with sour cream over natural fries
I was disappointed with the fiesta fries. The fries seem to taste of oil, I know they are a vegetarian truck but it tasted almost like lard to me. The guacamole and sour cream was also uninspiring.

After I hopped into the line next door (for the Manila Machine), I noticed Fresh Fries bringing out another batch of fries. 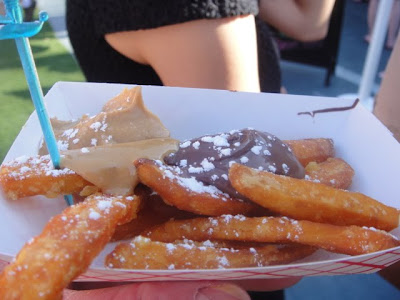 Peanut Buttercup - sweet potato fries with nutella and peanut butter
What a comeback! The sweet potato fries were very tasty and not oily. I really enjoyed the combination of nutella and peanut butter which worked well with the fries. This was much sexier than the previous dish. In fact, when they quickly ran out, the lady at the stand tried to "sell" the guac fries, to no avail. 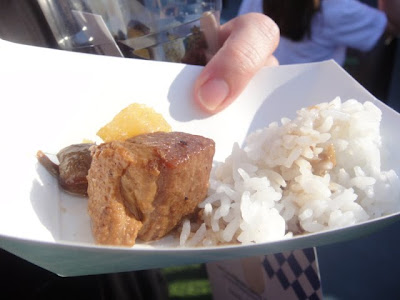 Pork belly and pineapple adobo
Adobo is a classic Filipino dish. The pork was braised and had a sweet glaze. 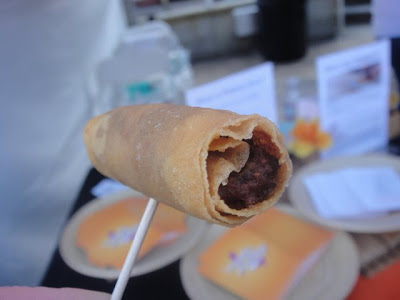 Waited about 20 minutes for this lumpia... apparently kitchen was backed up. I love lumpias. These were good, but 20 minutes in line meant 20 minutes lost elsewhere. At least when they came out, they were freshly fried. 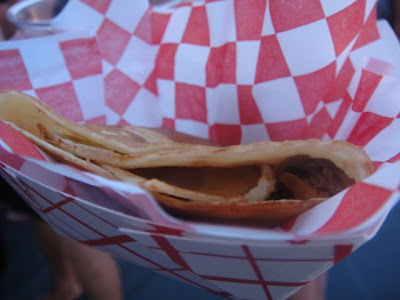 The Grilled Cheese Truck
This was one hard stand to find. It was actually located on the upper stands instead of on the field with the rest of the food stands. This is why a map would have come in handy. 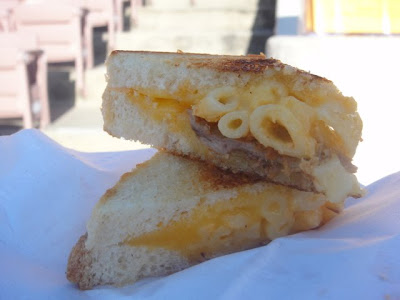 Cheesy Mac and Rib melt with sharp cheddar Southern Mac & Cheese, Pulled BBQ pork, caramelized onions on Artisanal french bread
The mac and cheese tasted just like Kraft's. That's not a bad thing, just say'in. The cheese was also a bit congealed by the time we got to the front of the long line. I really liked the buttered toast and the sweetness from the caramelized onions. 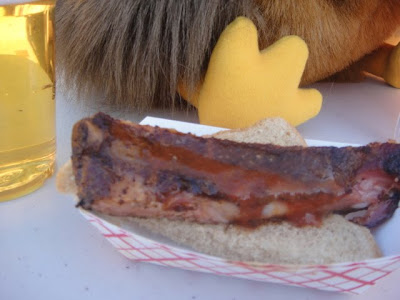 Slow smoked ribs
The rib had a smokey flavor and the meat was tender. The bread was a good napkin to hold the rib without getting your fingers dirty.

There was no shortage of sweets at the event. 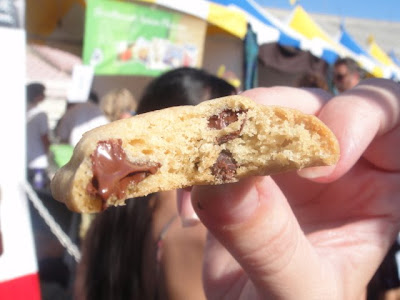 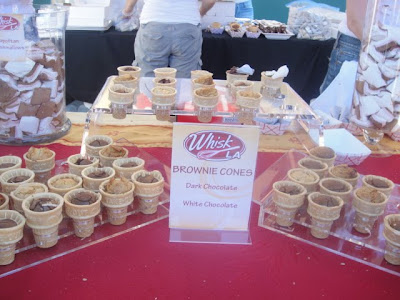 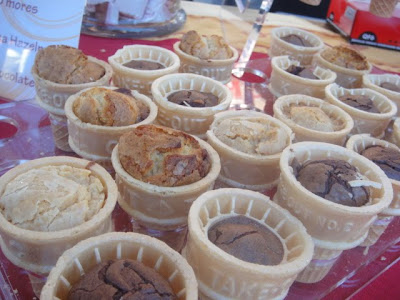 I thought it was clever to use an ice cream cone as a receptacle for the brownies.

They also had an Ice Cream Social where you could get unless supply of ice cream. 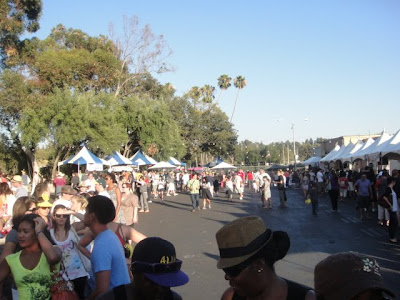 The ice cream area was located towards the entrance and away from the field, so it was less crowded and way cooler (temp wise). 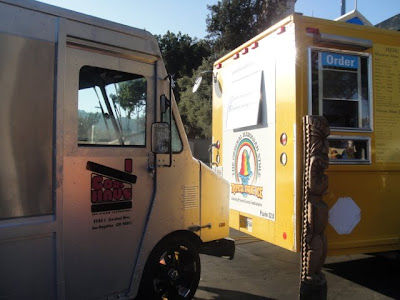 Actual trucks were parked and serving their ice cream in the area. 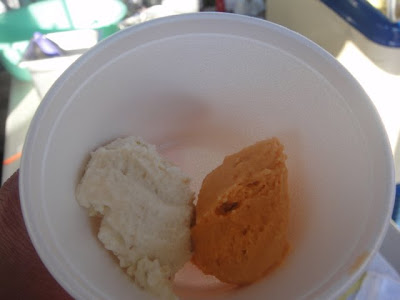 Pistachio Cardamom and Thai ice tea coconut ice cream
I liked the selection of ice cream which were rather exciting flavors. The Thai ice cream was my favorite, which had the perfect balance of tea, milk and coconut. 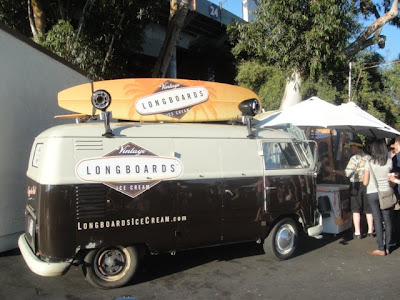 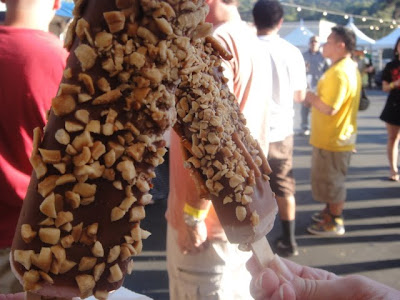 The Big Fight - Chocolate ice cream coated with Ghiradelli Milk Chocolate, pretzel and peanuts
The O.G. - Strawberry ice cream coated with Ghiradelli Milk Chocolate, waffle cone and peanuts
I just HAD to get this ice cream because #1 gotta support the surfers #2 I'd been eyeing some guy's strawberry ice cream and knew I had to get one of my own. They are not joking, this thing is the size of a longboard. I could barely get through half of it. I loved the chunks of strawberry in the milky ice cream. I also liked that they used waffle cone and pretzel crumbles as the coating. 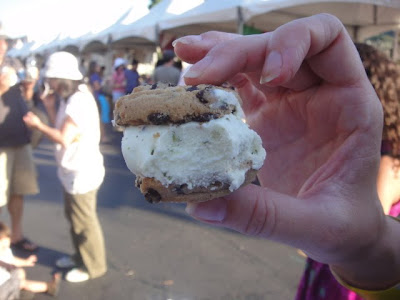 I thought it was a fun festival, something I would attend again. I like being able to hit up a bunch of trucks that I've been meaning to try, but could never make the effort to follow across town only to wait in line, then devour food on the sidewalk. I was disappointed that some key trucks weren't available such as Nom Nom, Marked5, India Jones or Dosa. Some of my favorites of the day were the tofu balls, rendang roti, dim sum, nutella/PB fries, Scoops and the Longboard ice cream. The rest.. sorry... were forgettable. Unfortunately I was ill so I only had 1.5 beers (shocker). But the best part was... thanks to the VIP session, we were able to hit up most of the stands in a short amount of time and were stuffed by 6.45pm, so I was able to drag my sick sorry ass home early, and circumvent any parking-lot traffic headaches.

Till next time, LA Street Food Fest. But next time... maybe you can throw in some wine as well?

Bravo bravo! I'm very impressed with your eats there. And I seriously need to try some of those peanut buttercup fries! Gah! Why did I never think of fries with nutella and pb before??!

Bravo bravo! That's some impressive eating! I can't believe those peanut buttercup fries. I might die of happiness if I ate them. :)

my fave was the deluxe dumplings from dim sum truck (although i think mine was the cheeseburger one not baked potato). didn't realize the VIP ticket would make such a difference in the crowd, but i learned my lesson for next time!

Ah, next time you're have to sneak some of that canned wine into your purse, surely they don't body check the VIP ticket holders. Thanks for letting me live vicarious through you. Big crowds and football fields scare me.

no need to hunt down food trucks? sounds too good to be true!

here goes my comment bomb for the week: I don't get this. I want to chase the trucks. Buncha lazy fuck LAists.

Diana - The best part is.. the fries are something so simple, I already have PB & Nutella at home :)

Catchacubinitsden - VIP all the way. The lines looked really painful once regular admission opened up

anna - SMART thinking, cuz they totally did NOT check. Sigh.. next time, next time..

Sinosuol - sorry man, some of us don't have the youth and energy to wait around in long lines in the sun for each truck

Haha, glad you had fun. I was actually working at the Starry Kitchen stand, so I'm glad you enjoyed our balls :) Sadly, since we were working, we didn't get to try much of the food at the Food Fest