There aren't as many cool music spots to check out new bands in the Westside than there are in the Eastside. Dakota Live Music Lounge, which took over the space of Santa Monica favorite Temple Bar is no Spaceland or Troubadour but it's still pretty good. Their events calendar is filled with Indie Rock nights, Salsa (on Thursdays) and acoustic/karaoke. But Dakota goes one step further. They also offer a nice selection of food items.

We decided to attend the Fashion and Music Live Event at Dakota this week. The event included performances by three bands followed by a fashion show from up and coming young designers. Happy Hour is offered, at the bar only, from 7-9pm. It worked out perfectly because I was stuck at work until 8pm but still made it in time to put in food and drink orders. We grabbed seats at the bar area. It's very dim inside with red lighting which reminds me of an Eastside bar such as 4100. 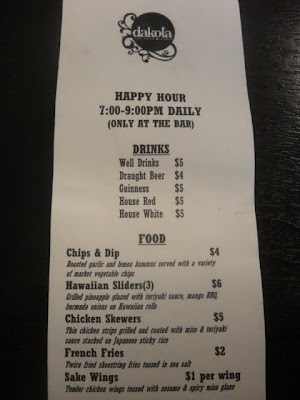 The happy hour menu includes beers for $4, house wine and well drinks for $5, and a couple food items. The food prices are a great deal such as $2 for fries. 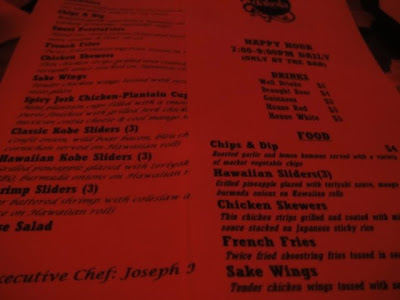 They also have a regular dinner menu that is still priced well. It's not your regular bar menu and includes items such as wild boar mac and cheese, kobe sliders and miso cod tempura tacos. Unlike many grungy Eastside music venues, Dakota's kitchen utilizes fresh, organic and local ingredients. Their chef Zach Sauders recently came on board and he's worked at many excellent French restaurants in the Santa Monica including Melisse, Anisette and 3 on Fourth. 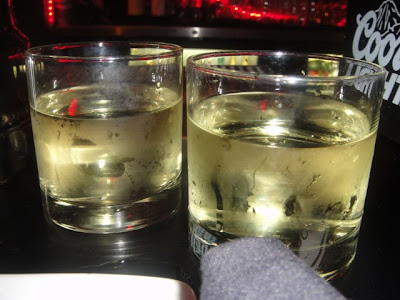 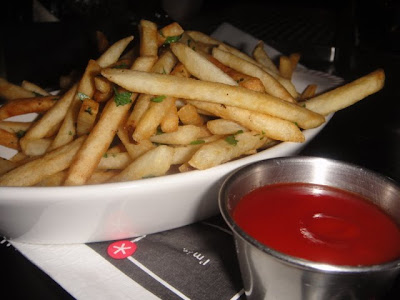 Fries ($2) Twice fried shoe string fries
What a steal. They were fried crispy. 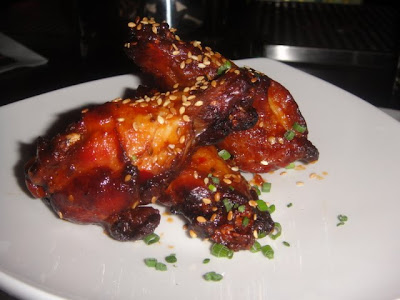 Sake wings ($1 per wing) tossed with sesame and spicy miso sauce
There was a decent amount of meat on the wings. I like the Asian flavoring over buffalo wing style so this worked for me. They packed some spice as well. 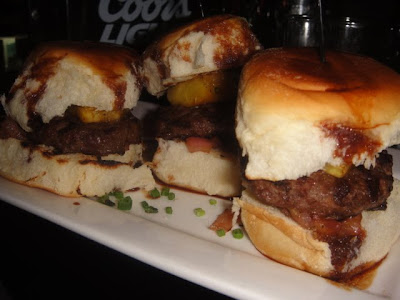 Trio of Hawaiian Sliders ($6) Grilled pineapple glazed with teriyaki sauce, mango BBQ, burmuda onions on Hawaiian rolls
The slider were a perfect snacking portion. I enjoyed the sweetness of the pineapple but my friend thought it was too sweet. I liked that they used Hawaiian rolls instead of regular buns.

After grubbing, we went into the next room where the bands were playing. 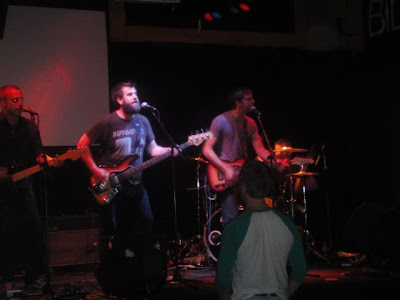 Rodeo Ruby Love was the second band of the night. They are an indie pop band and jammed pretty well that evening. 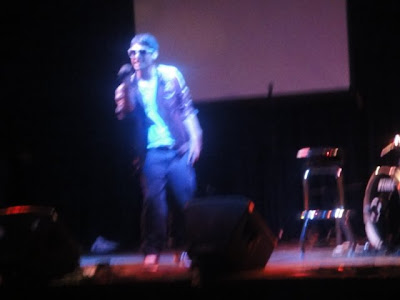 The last act of the night was Trevor Page. Page is an electro/pop/R&B artist and a larger than life character with his large retro white sunglasses and exaggerated dance moves. I was inclined not to like this artist because he's poppy not rock, and I like rock, but he was surprisingly very good. He had a great voice and his self-written songs were very catchy. He also sang a cover of Ushers' OMG, which I was proud of myself for recognizing - thankfully I caught up on my Top 20 list on VHI earlier that day.

I like checking out new bands and I'm glad that I didn't have to drive to Silverlake to do so. I also liked the happy hour at Dakota which ran late. I thought the food was decent for bar food, and the prices very reasonable. I appreciate that they put in the extra effort from sourcing local and organic ingredients, to the furniture and floors that are made of recycled wood. Even though it doesn't have the grungy feel of a Silverlake joint, Dakota fits right in with the Westside crowd and does a good job of introducing new bands and food to the area.

never been. gotta remember this place instead of Wilshire...

sinosoul - just saw on eater that they are closed! due to fire... glad i wasn't there when it happened!

wait, Temple Bar is no more? the things i miss living on the eastside.

oh, and anything on a hawaiin roll is A+ in my book!