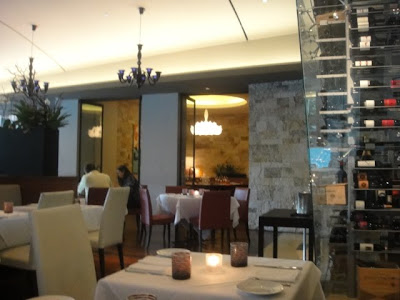 The Drago brothers own a bunch of Italian restaurants around town including Drago Ristorante, Tanino, Il Pastaio and Via Alloro. In college, I'd eye Tanino in Westwood, hoping that the bf would take me out for a romantic dinner. But at $30 for an entree, that was never really an option. I've been meaning to try one of the other Drago restaurants once I could afford $30 entrees, but have never made it to any of them. When the Blackboard Eats 30% discount for Drago Centro appeared in my inbox, I knew we had to take advantage.

Drago Centro is eldest brother Celestino's latest venture and is located in downtown LA, in the former Bank of America spot. If you park in the building, you'll get 3 hrs of free valet parking with validation, which is unheard of especially in Downtown. It's a beautiful restaurant with high ceilings, modern decor and a glass wine cellar at the entrance. The restaurant smelt fishy though, in a bad way. 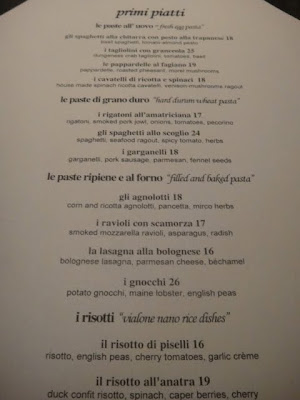 They offer a six course tasting menu for $75. Usually we always order the tasting menu if it's offered but we weren't particularly hungry that night so we decided to order a couple dishes to share. The menu includes a number of starters, pastas and entrees. After reading reviews online, it seemed that their primi pastas were actually a fairly large portion and could be considered entree size. It appears that their pastas are their signature dishes so we had to try one.

We felt neglected at our table in the corner, waiting 20 minutes before anyone would bring by a menu. When we tried to order a bottle of wine from the waiter that was hovering around our table, he said that we had to wait for another waiter. We watched as our waiter was busy fussing with other tables, joking and laughing with the diners, while we sat in our secluded corner, parched. 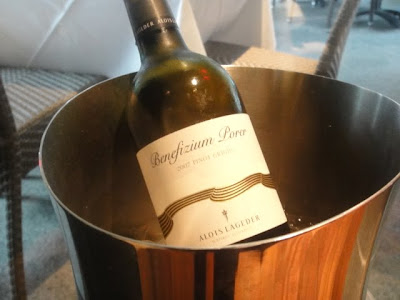 Finally he came by. We started with a bottle of Pinot Grigio. They also had a cocktail list but if I was forced to drink liquor, I'd select vodka and unfortunately there was only one vodka based cocktail on the menu. 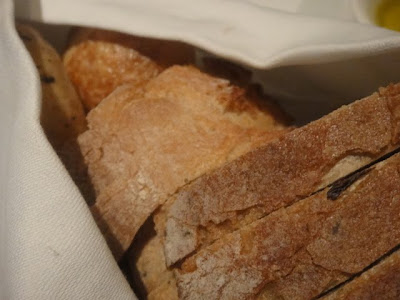 Bread was served with a variety of olive and sourdough. They served it with olive oil and we asked for a side of balsamic vinegar. The waiter (the 1st one that wouldn't take our wine order) looked really grumpy and didn't say much, but at least he didn't forget the balsamic. Right when they sat down the bread, our starter also arrived. They split the order for us at no additional charge. 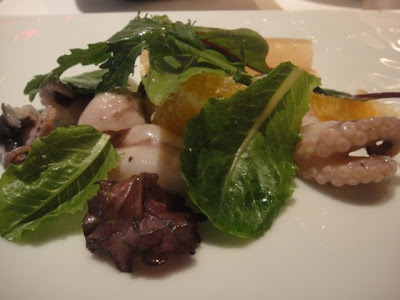 l’insalata di polipo - baby octopus salad, blood orange, wild greens
The octopus was cooked well and wasn't rubbery, but unfortunately the octopus was rather tasteless. It was a rather uninspired dish in terms of flavors.

After we finished our starter, we had to wait over 20 minutes before out pasta arrived. When it finally did, we were glad to see that it was also portioned out for both of us. 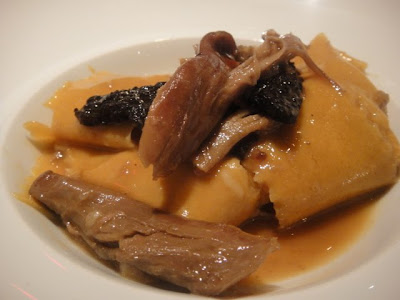 le pappardelle al fagiano - pappardelle, roasted pheasant, morel mushrooms
This came highly recommended on Yelp. I liked the flavors of the sauce. The pasta itself was toothsome and quite a sizable portion for a half order. Unfortunately the meat was tough which was a pity because the starchy pasta would have been better with fork tender meat.

As we looked around, we noticed that other tables were served an amuse bouche. We didn't received one. It seemed that they served amuse bouche to tables that weren't partaking the tasting menu either. I hate being cheated of an amuse bouche. Not acceptable. 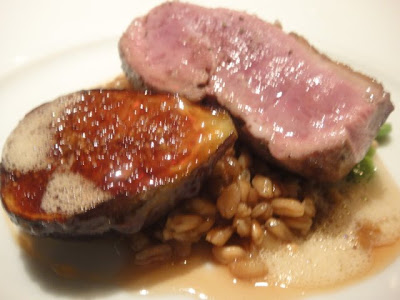 l' anatra- Duck breast, black mission figs, farro, foie gras cream
Thankfully we asked the waiter to cook the duck medium rare because apparently the default is medium. This dish sounded perfect because it had all my favorite components: duck, figs, foie. Unfortunately, it did not deliver. The duck meat itself was cooked well but the skin was not crispy. They should have rendered the fat down because there was a big chunk of fat that was hard to cut through. I liked the sweetness of the caramelized figs but I did not taste any foie gras.

Our waiter came by to apologize for the wait on the duck. We hadn't even complained, and BTW it wasn't the duck that we waited long for, it was the pasta. I was shocked to see him by our table considering we had been ignored the entire night. Could it be that the more important guests had left? Or could it be that I was taking photos (albeit discretely) and furiously writing notes on my iPhone? In any case, he said he's bring out "his favorite dessert", on the house. Again, we waited a good 15 minutes for the dessert. Not to sound ungrateful but we had places to go, things to do. 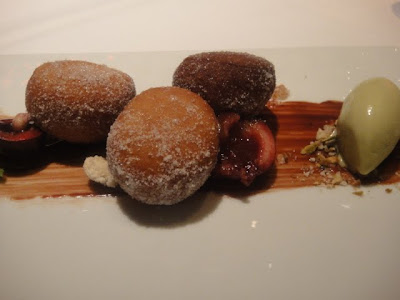 i Bombolini - doughnuts, bing cherries, crystallized pistachios, chocolate sauce
I liked the donuts which were freshly fried. I didn't care for the cherries as they were too sweet for my taste. But it's good for something that's "free", or so we thought...

The food was mediocre, nothing to write home about. The pasta was the best dish of the night while the octopus and duck were not memorable. I do like that they split our orders which made sharing dishes more convenient. The wine prices were also very reasonable. Unfortunately, the service was disappointing from the grumpy waiter who growl whenever he came by, to the other waiter that left us waiting for 20 minutes before he came by with a menu. Also, where was our amuse bouche? To make matters worse, when I got home and studied the bill, I noticed that they had charged us for the donuts. Some complimentary dish! Complete and utter FAIL. The food wasn't that great to warrant the drive to Downtown LA during rush traffic. Thank goodness for BBE's 30% discount because I'd be livid if I had to pay full price for the meal + a dessert that I never ordered.

Yikes. Guess I'm glad it wasn't in my budget to join you at Drago! What a bummer that the food didn't live up to expectations. I would have been so sad to see my favorite duck and octopus mistreated so!

wow, what a sucky meal. you just reminded me that i should look at my receipts more often.

Wow, really awful! I can't stand hearing about restaurant experiences like that, especially from a high profile, high dollar, highly rec'd place like Drago Centro. I was planning a trip there some time soon too. Now I definitely have second thoughts. Sounds like there were problems in the kitchen and certainly in front of the house.

Thanks for the great though unfortunate review.

Hmm wow is there a shortage of vodka? That's too bad the food and services wasn't all that. I've always been curious about their HH

Did I miss you on Weds? or... ? I rather enjoyed the octopus. It was tender, light & citrusy, not meant to be seasoned prior to cooking. Mixed/matched the pasta with the "topping" and got the pheasant with the duro rigatoni which was tasty in a lamb ragout kinda way, though beyond salty. The service was painfully slow, but it can be blamed squarely on BBE. FWIW, no amuse for us either, then we spent about only 25% relative to our neighbors.

That said, for the money, BBE or otherwise, there are far better choices in LA. (sorry for TOME of a comment!)

I got so excited when I read "foie gras cream". Too bad the meal didn't pan out :(

Diana- you got lucky! If only I sometimes listen to my pursestrings..

Bagnatic- seriously! I know its not much $ but its the principal.

Eddie- Thanks! like sinosoul mentions, perhaps its because of BBE, so maybe try to hit it up after the promo is over. Sucks to sacrifice $ for service though...

Anna- I think I might try their HH though.. looks affordable and I like the bar area too

Sinosoul - no, don't worry, you didn't pretend not to know me again :) I was there on Tues. Glad your dinner went better. I guess you won here, I won a Hatchi :) Sucks that service is compromised for BBE promotion. But they wouldn't have known we were using coupon as we gave it at the end. Hmm... maybe we are not as sharply dressed as the normal Drago clientele

liz- I know!! I love foie so I was excited for that component. Interesting that something with such a distinct flavor could be masked in the dish.

So sad you got such crappy service. That happened to me at Drago, too. :(

I am so bummed you had a
bad experience at Drago Centro. I have always had great food there, but the service is a little spotty. :-(

weezermonkey & food she thought- did your bad service happen during BBE? If not, that's not acceptable!

if you still have the receipt i am sure you could bring it back to the restaurant and speak to the manager. rather than just reimbursing you they should offer you more, like a comped meal for next time or 50% off coupon, something like that. i'm not the kind of person who would go in and ask for such, but sometimes i wish i was!

catchacubinitsden - so update, We did end up calling and they refunded us the cost of the dessert. I hate doing that- it wasn't the $$, but its the principal.