I was contemplating whether I should bother writing this review because Banh Mi & Che Cali wasn't earth shattering, but I was impressed with it's low prices so I felt compelled to pass along the information. 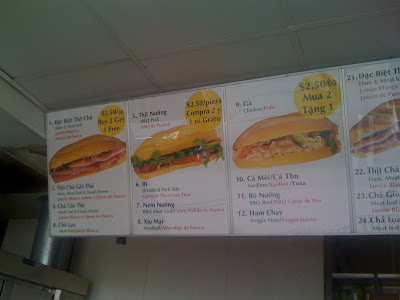 I haven't ventured down to South OC in a while but a sweet SSW swell rolled in over July 4th weekend so we decided to make the trip down south. After 3 hrs of surfing some insane shoulder to head+ high waves at Trestles in San Onofre State Beach, we were starved. My starvation was intensified after scoping out the food at 99 Ranch Market in Irvine where I managed to spent $50 in produce and snackies (think pokey, pineapple cake, roasted peanuts, instant noodles). I keep forgetting how cheap things are at 99 Ranch. A similar 5 bags of groceries at Ralphs would have cost me over twice as much.

I'd been craving banh mi as of late so we Yelped for the nearest Vietnamese spot, something that was right off the freeway on our way back to the Westside. It might seem like a poor decision to hit up just any random place but the fact that Banh Mi & Che Cali has other locations in Westminster and Garden Grove, all with pretty good Yelp ratings, lends it some credibility. 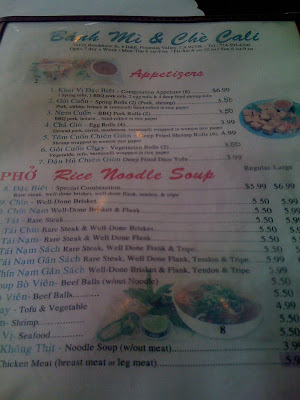 Prices are awesome! Banh Mi sandwiches are $2.50 each for the french roll (not applicable to the baguette which is actually 25 cents cheaper), and it's buy-2-get-1-free. They also offer 50% off pho ga (chicken pho). I figured at that price, the portions must be pretty small so I asked the lady at the counter. She showed us the size of the french loaves that she uses for the sammies and boy, those things are huge! Their selection included an interesting variety including their traditional BBQ pork, chicken, meatloaf, meatball, sardines and veggie. Unfortunately they ran out of the shredded pork skin. sadness. 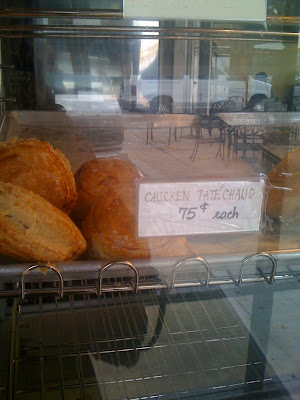 When I saw pate and pastry together, I couldn't resist. 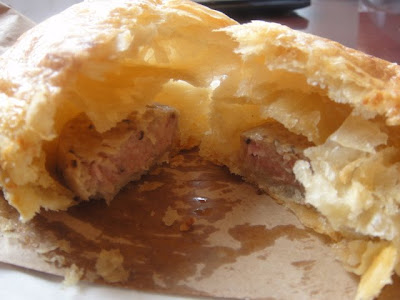 Chicken pate chaud
This is a French inspired Vietnamese pastry. The puff pastry crumbled upon touch, and a tiny sausage-like piece of pate was encapsulated in the buttery pastry. I thought the pate was an odd texture. It was not soft or creamy. It was just OK, not the best pastie I've had because of the small piece of pate that didn't taste like pate, but I did like their pastry. 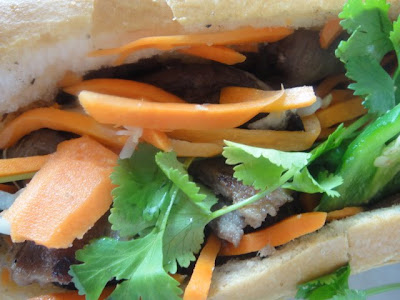 BBQ pork banh mi was my favorite of the sandwiches. The pork was flavorful, juicy and still had some fatty pieces attached to the meat that absorbed into the fresh crusty bread. My only complaint was that there wasn't enough pickled vegetables, and in fact the pickled veggies that they used didn't pack a punch. There was also only one jalapeno in my half of the sandwich. 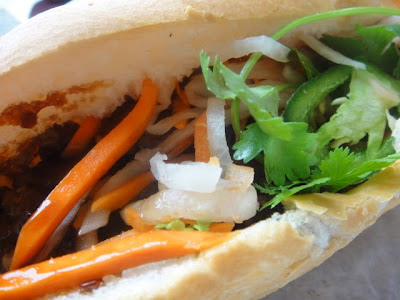 BBQ beef banh mi was also tasty and had a sweet marinade. The beef was dense and tasted more like a burger patty, I would have preferred thinner slices of beef. But the flavoring was good. 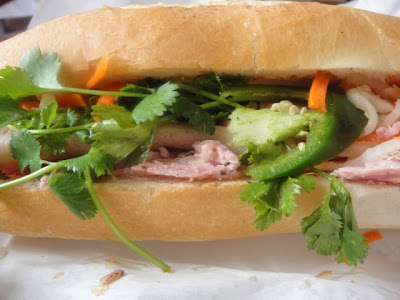 Ham and meatloaf banh mi was lighter than the other two. When we ordered our sammies, we asked for no mayo. It appeared that they also omitted the pate. Dude, that's the best part of any banh mi, IMO. But when we asked about the missing pate, our waitress brought by a bowl of pate which we eagerly spread on the bread. It made a big difference because the pate moistened the bread and added a creaminess to the sandwich. I was impressed that the ham they used was thick, good quality ham instead of packaged ham from the grocery store. The meatloaf wasn't what I expected. It was thinly sliced and looked like cold cut instead of something thicker.

I'm glad we stumbled upon the restaurant because I got my banh mi fix. The sandwiches at Banh Mi & Che Cali were not bad. I think they should have added more jalapenos and stronger pickled vegetables but otherwise I enjoyed my quick lunch, especially the bbq pork. The banh mi was large; I only ended up eating a total of one sandwich (half a BBQ pork and a quarter of the other two). I also like the prices. $6.50 fed two famished surfers. You really can't go wrong with that.

Dang! Now you have me craving banh mi when I am on the way to ramen!!!!

Love these little gnarly banh mi shops in the OC - you remind me to do some ranch 99 shopping too.

Ended up at a new Che Cali coupla days ago. All the shops offer B2G1 on the banh mi banh mi's. Had $5 bowl of bun; quality is sooo low but... it does fill you up. Just don't get the shitastic ice BOGO ice teas.

Saw a buncha surfers by Morro/Pismo in wetsuits while I was freezing my nuts off on the motorcycle. You guys are f'ing CRAZY.

i am sooooooo going to get a banh mi this saturday. have been thinking about it for a week and your post just tipped me over.

Love hitting up Vietnamese sandwich shops like this. I like asking for extra pate spread on my banh mi cha lua.

Food she thought- excited about MY ramen time this wed ;-) and i better not forget financiers too!

sinosoul- yeah its not the best banh mi i'm sure, but I haven't really had the awesome authentic ones from Westminster so I can't really compare. But at least it was CHEAP!
p.s. I heard there was a shark attack over the 4th weekend in Pismo(!!) which is why we went south vs north

bagnatic- sigh wish I could get it more often in my area. it's kind of a novelty for me, prob 1/year

Liz- Pate makes SUCH a big difference. I've been to some unauthetic places that didn't offer pate DISPPOINTMENT